Despite the profusion of mail order ads and supply shops, the 1980s was actually a somewhat oppressed decade when it came to martial arts collectibles. And when you look at an ad like this, it’s kind of easy to see why. 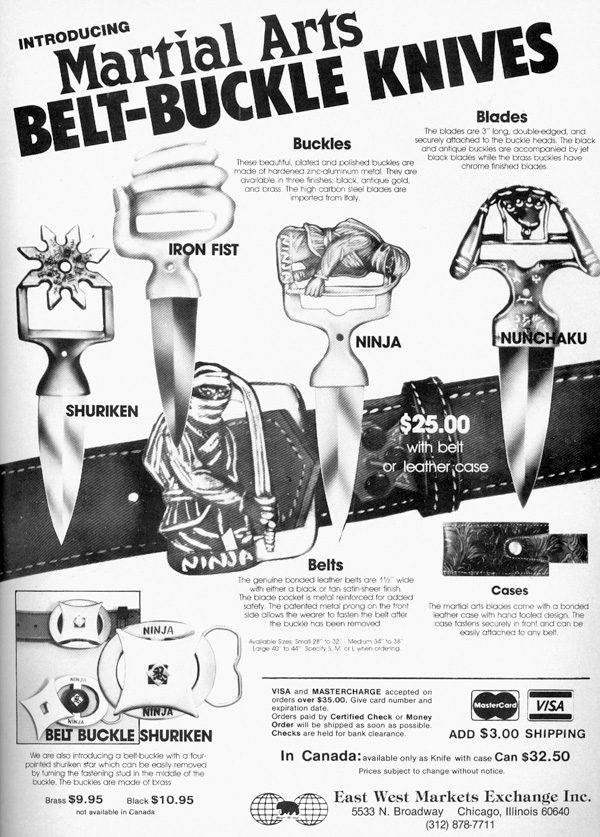 Heaven help the poor soul who actually wanted to train back then. Goods like these lumped any collector or practitioner into a public perception pool pissed in by crazed vigilantes, unhinged survivalists and blade-obsessed Travis Bickle wannabees.

I mean, who actually wanted to wear something like this, never mind conceal a dagger inside of it? Remember the Bruce Lee/ninja-fixated psycho David Patrick Kelly played in Dreamscape? HE WOULD! He was the role model for ordering these.

With questionable material like this out there drawing attention to itself, it made getting a decent sword or pair of durable nunchuks a real adventure, especially in certain states.

But I wonder if many of these even made it out of the warehouse into anyone’s mail box.

80’s mail order martial arts suppliers lived under the threat of legal shut down at any time. Some kid would poke an eye out, or some mugger would be caught with something mis-identified as a ‘deadly ninja sword,’ and lawmakers looking for cheap press would raise all sorts of alarms, promising to rid the streets of assassin tchotchkes.

For the most part, it was a lot of hot air. However the occasional swap-meet sting or raid on a Chinatown curio shop would result in products disappearing from ads, or states being added to the “cannot ship-to” list in the fine print of the catalogs.

What’s really weird is a lot of the goods back then were aluminum alloys, unsharpened chrome-plated tin and other decoration-grade materials. A decade later, it seems much of the paranoia disappeared (or some loophole in importation laws was found), and every flea market was suddenly infested with razor sharp real steel swords from China.

The new grades of cheap sword you find in plague-like quantity on eBay now are a heinous combination of sharp blades and cheap handles, and more dangerous than anything ever sold by mail order back in the 80s.

Well, more than anything save the sculpted ninja buckle stabber…