I must admit I’ve had a difficult time in researching this post, and the pedigree of the property involved. Reading below, it’ll become pretty evident that while yes, I have a network of nerds who can identify any antique handgun known to man, what I actually lack is a good Japanese translator and a reader of kanji. So while the language barrier sometimes betrays an embarrassing lack of authority in this sight, I really do try to make up for it in passion and enthusiasm for collecting. Bear with me, one day we’ll have the overseas research covered just as well as the peripherals like revolvers and printing techniques and all the other garbage I bring to the table… ONWARD!

There are three prolific not-necessarily-ninja hooded heroes in Japanese cinema: the masked Anti-Shogunist (just made that word up!) Kurama Tengu, the purple-hooded detective swordsman Murasaki Zukin, and this pistol-packin’ force of justice KAIKETSU KUROZUKIN.

Think of him as a chambara Lone Ranger, or a Zorro in ninja-wear… And any problem he couldn’t solve with 12 bullets would be just as easily diffused by a quick-drawn katana off the back. 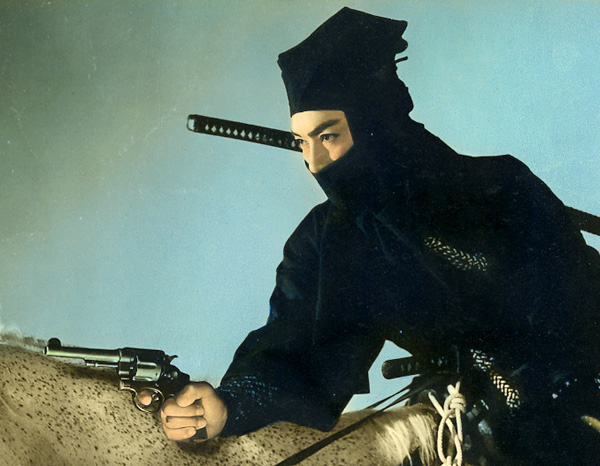 “Kaiketsu” is a great Japanese word used to describe a man of greatness or extraordinary deeds, pretty much used to modify a corresponding name or term into a hero. “Kurozukin” (or split as ‘kuro-zukin’) is literally Black Hood. So in American pulp-hero terms, it’d end up something like “The Amazing Black Hood” or “Black Hood: Man of Adventure” or something equally grand.

KK was an adventurer who would insert himself into all sorts of political intrigue and conspiracies as the Shogunate crumbled in the late 1860s. He was a catalyst for justice, making trouble for those that deserved it and protecting those caught up in conflicts bigger than themselves.

Kurozukin adventures date back to the silent film era, and the property has seen some sort of revival in just about every decade since. Although not a ninja character, more often than not the studios used off-the-rack shinobi costuming for the hero, accented with some amazing Western pistol rigs and saddles that would make Gene Autry proud.

Kurozukin’s “Oater”-esque saddle rig and gunbelt are unlikely, but plausible. The double-action revolvers however are Smith & Wesson “Military and Police” Model 1905s, about 40 years too early. Most every Kurozukin film, poster or still I’ve seen suffers the same sort of snafu. They either just weren’t sweating the historical detail, or the prop guys had a wealth of military surplus on-hand in post-war Japan, but less access to frontier replicas. 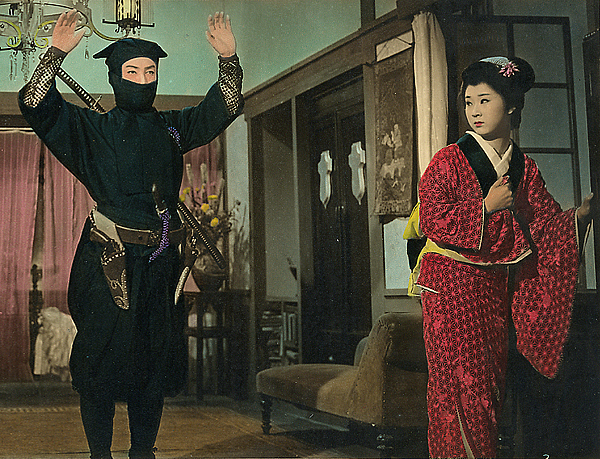 This still was shot on set of the 1960 film Ayaushi! Kaiketsu Kuro-Zukin (Danger! Magnificent Black-Hooded Man or The Black Hooded Man in Peril). That’s the always amazing Ryutaro Otomo in the get-up. He played the character in a series of eight films starting in 1955.

I’ve only seen an un-subbed inky and fuzzy VHS boot of this flick so forgive the vagueries. The conflict revolves around a Chinese delegation – perhaps a troupe of traveling entertainers – trying to escape a conspiracy in Japan. The last act sees their wagon-train chased by an army of villains, with all sorts of gunfire and horseplay. VERY much Republic serial Western fare.

Here are some screen caps – apologies for the quality… 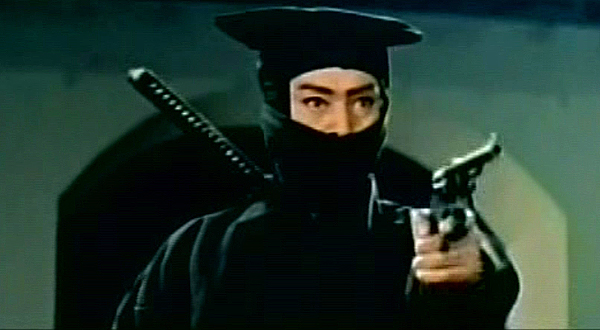 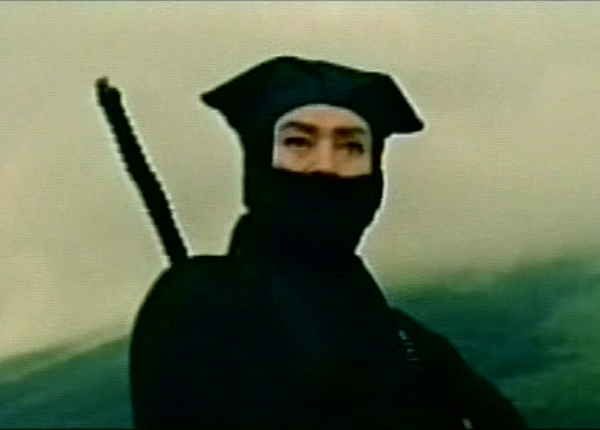 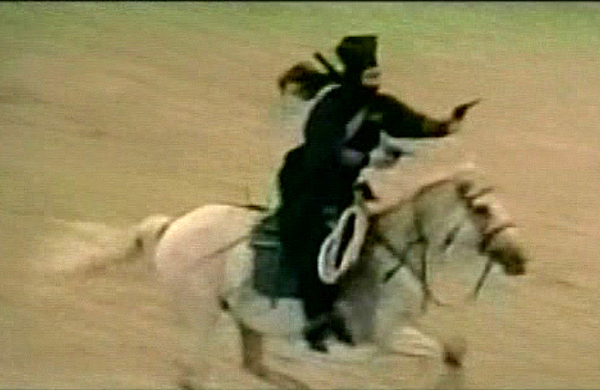 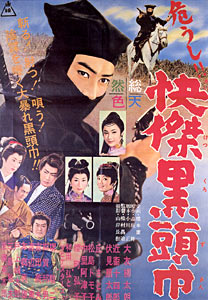 The first two films of Otomo’s series are out there in the ‘trading community’ and well worth hunting down. The second film has a great fight where an incognito Kurozukin fights off, and humiliates, multiple attackers using the wooden ‘bite’ of a parade dragon head. Also out there is an 80’s incarnation starring none other than Tomisaburo Wakayama.

MANY THANKS TO: Gaijin84 and Gringo Solitario of the Ninja Dojo, and pistoleros David J. Schow and Ken Valentine)