A lot of martial artists aren’t genre film fans themselves, gratuitous fights and bloodletting just miss the point. I knew a guy who made a pretty decent case that the only real martial arts movie he ever saw was Iron and Silk, because it wasn’t about combat, but rather an individual’s pursuit of a warriors craft. Such a craft, abstracted from the ‘war’ part of ‘warriors,’ then becomes “art.”

Then again, maybe the combat is the key to unlocking something more profound than mere violence. There are some pretty amazing martial arts films about conflicted characters following an inner journey and discovering themselves through trial by fire.

Or maybe they are just big ass fight movies with tons of chop-sockey and weird weapons, hiding behind an appropriated term?

The 1978/79 Shaw Bros. genre-bender Heroes of the East is actually all of the above. This often unsung masterpiece of Lau Kar-Leung‘s innovative direction and Gordon Liu‘s phenomenal flexibility as a performer argues the philosophy and ethics of martial mastery, sees its hero grow as a person via escalating physical trials, and for the kick-craving crowd has no less than a dozen major fights with ten different fighters involved.

And for our purposes it also has a rather unique application of ninjutsu among it’s surprsingly respectiful treatment of Japanese martial arts. As much as we love Five Element Ninja here, this romantic comedy hybrid with the traditional tournament movie structure is in a wierd way the best portrayal of ninja in a Chinese/Hong Kong film.

The flick in a nutshell for the uninitiated: Gordon Liu plays a martial artist betrothed to a Japanese woman (Yuka Mizuno). Once married, he discovers she’s quite the martial artist herself. Frustrated by her new life in a foreign land, she continually trashes their house while training. It’s like a pan-Asian martial arts take on Taming of the Shrew, as they trade blows and sword parries in a series of ‘debates’ about which nation’s arts are more efective.

She goes too far however when she breaks out that – gasp! – filthy art of ninjutsu…

After a regrettable separation and a huge miscommunication, our hero finds himself defending both his marriage and China’s martial traditions in a test of skills with no fewer than seven Japanese martial arts masters! Can he learn enough exotic kung-fu to beat Japan’s best? Can he keep his bride away from would-be home-wrecking shinobi master Yasuaki Kurata?? How the hell many fights can one movie contain???

Heroes of the East could have been TWO great movies. The whole martial-arts Bickersons thing could have carried a whole film itself. Liu and Mizuno are great together, and she’s just adorable. 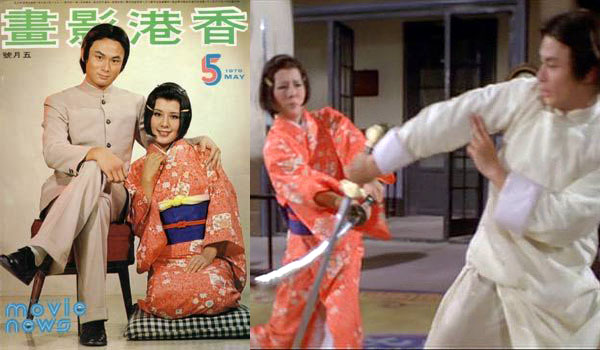 But then it turns into this whole other deal where one lone Chinese stalwart pits the traditions of Shaolin, Drunken Boxing, weapons like the 3-sectional staff, etc. against kendo, judo, and Okinawan arsenals. Every fight here is good, some absolutely great. Each sees the hero solve the puzzle, and he beats each Japanese master so soundly, they can only take their defeat with honor and show respect to an otherwise despised Chinaman.

No one is killed, nary a drop of blood spilled, and in good Shaw tradition, Chinese martial arts prevail.

Although it takes every trick in the kung-fu book to get past the ninja! 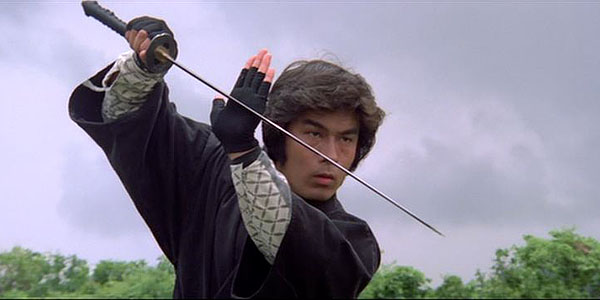 Ninjutsu is treated as the blackest of black arts, a soiling of proper “martial world” behavior, a dark, dirty place only the sinister Japanese would be willing to go. Chinese history may have its share of espionage and assassination, but said shadowy pursuits are not part of a proper warrior’s repertoire.

But despite the usual ‘dirty Jap’ conceits of Shaw Bros. productions, the Japanese come off as a respectful bunch, and a major plot device wherein a gesture of surrender is totally misinterpreted, then reversed at the end in an act of mutual redemption is way out of the box for the studio.

There’s also quite a bit of  humor throughout. The demented performance of a diminutive Japanese sai expert is a wonder to behold, you just cannot take your eyes off this weirdo. Ninjutsu certainly isn’t spared a good ribbing either. Kurata’s ‘crab-walk-style’ is positively hysterical, taking the edge off some rather savage attempts at under-handed murder.

You won’t find a better international pairing of fight performers than Liu and the Hong Kong action vet Kurata, though. Occasional goofiness aside, their fights are some epic stuff.

If there’s one thing that’s going to hang up a shinobi cinema fan in this movie it’s the treatment of ninjutsu as just another niche martial discipline, like karate or sumo. Totally compartmentalized, it has its own outfit, weaponry, signature moves etc. It’s a much too simplified a notion, although totally compatible with the Shaw “martial world” concept.

Combining Chinese and Japanese martial arts on screen is challenging to say the least. Japan’s arts are stiff and linear, China’s more circular and flowing. From a cinematic perspective, Japanese movie fights are all about long pose downs and short explosions of action with devastating results. Chinese and Hong Kong fights are long chains of dodges and parries mortared with plenty of flourish and wasted motion, drawn out like the guys are getting paid by the punch.

For Lau Kar-Leung’s purposes here, he had to sabotage the Japanese arts for some of the duels. No Japanese swordsman would diddle with a Chinese long sword in a five minute fight more akin to something William Hobbs did in the Musketeer films. Also ignored is the absolute superiority of Japanese sword-smithing. A katana goes through a Chinese sword like butter if they meet edge-to-edge. Period.

Other scenes have more compatible disciplines and more than make up for it. The yari vs. quiang spear duel is absolutely off the f’n charts!

But even with the kung-fu-ification of the Japanese martial arts, the performers rise above the sillier bits to create consistently good battles. Most of the running time of Heroes of the East is combat, and it all means something.

Another thing I love about this film is the ninja costuming, which is straight out of 60’s Japanese television. And with the 80’s craze on the horizon, it was one of the last times such old-school pillowy gear was used on the big screen (outside of Japan at least).

Heroes of the East is probably higher regarded by kung-fu fans than ninja fans, but shinobi-cinemafiles need to 1.) make sure to see it wide screen so you can take in the superb choreography and photography, 2.) realize how much richer this portrayal of ninjutsu is compared to other one-dimensional Shaw and HK flicks, and 3.) at least give it up to the always superb Yasu Kurata and clubberin’ cutie Yuka Mizuno. 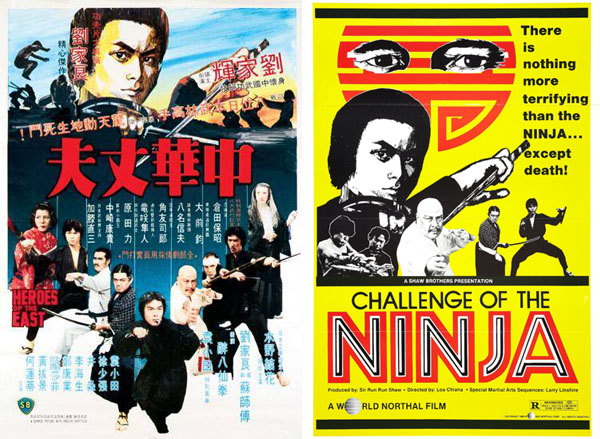 Most of us were first exposed to this film as a full-frame, dimly transferred, chopped up Shaolin Challenges Ninja or various other crude retitles. Seeing the widescreen remasted glory of Celestial’s 2005 transfer was (once again) a real eye opener. 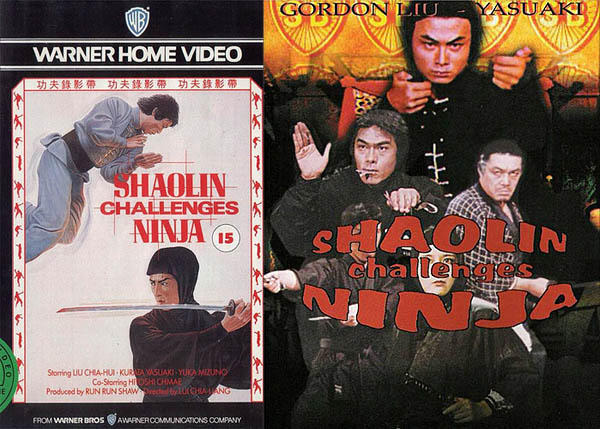 This blog was obviously inspired by the title.