What do you do with a half-dozen mail-order ninja suits, some black eye-liner, a few friends willing to tumble around a public park like idiots and a heap of public domain films?

Well, in the 80s if you were Godfrey Ho, you made two million movies comprised of newly filmed ninja-frosted kung-fu fights cut into older crime dramas to fill running time, and duped unsuspecting video store patrons into taking home drek with derivative titles like Ninja Terminator and Full Metal Ninja.

And… if you’re Meagan Rachelle, Ed Glaser and the crew of Dark Maze Studios, you take those very same elements and a couple of Mill Creek dollar-store DVD box sets and go to town, creating the astute and award-winning parody shorts Ninja: The Mission Force. 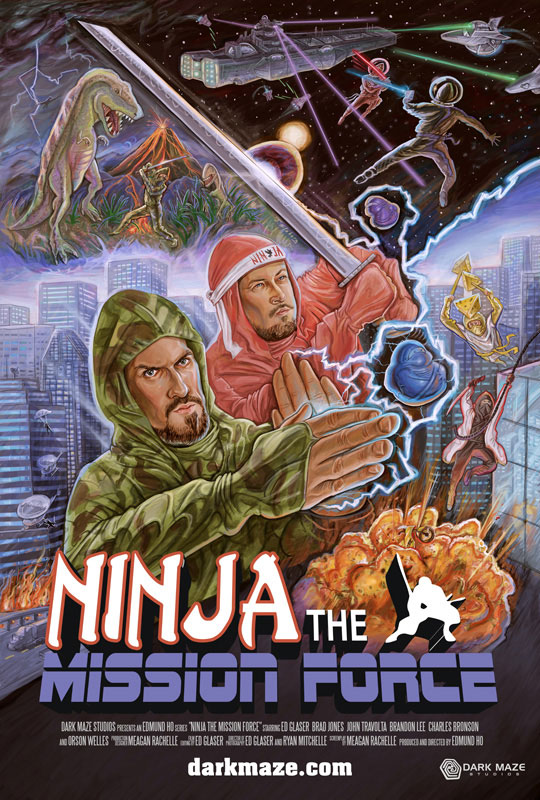 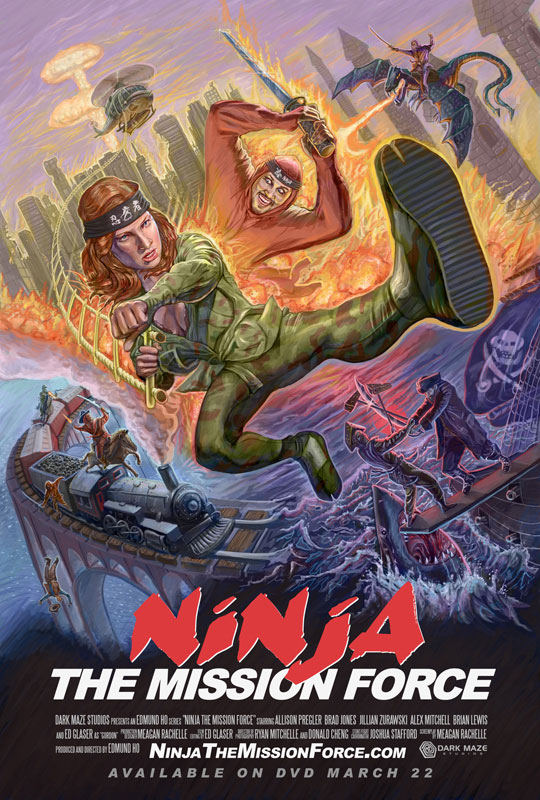 Oh the pain we all endured back in the day when we got burned by yet another alluring ‘cut and paste’ title with even more alluring shiny package art, only to be crushed by the yellow and pink-clad assaults to all things shinobi-sacred these films delivered. But time, some popular viral memes and the efforts of sites like The Golden Ninja Warrior Chronicles have fostered a hindsight appreciation of one of the most shameless exploitation cinema chapters of all time. And now Dark Maze has taken things one step further…

Ninja: The Mission Force is in the MST: 3K / RiffTrax mold, cutting new footage into old films, replacing original audio with comedic overdubs, etc., but with a perfectly dialed-in homage to the head-slapping bat-shit craziness that were the signature elements of Godfrey Ho’s ninja-verse; headbands that literally say “ninja” on them, ridiculous eye make-up on all the male actors, Garfield phones, toy robots delivering VHS death threats, silly fights in public parks, spinning costume changes and jump-cut disappearances and yes, plenty of scenes of new footage characters “interacting” with old footage characters via phone, mail, expositional slide shows etc. and so forth. 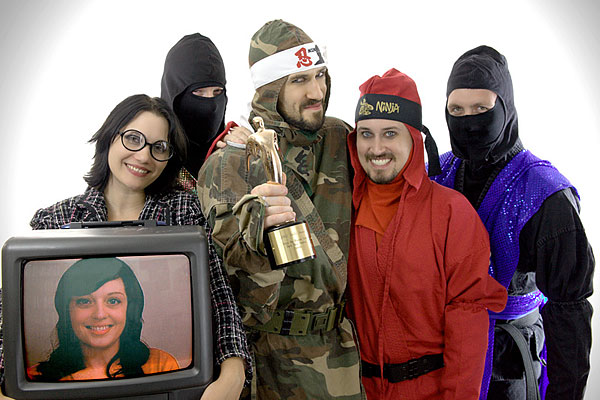 N:TMF goes above and beyond when they cut their Ho-esque ninja gags into some genuine classics like Orson Welles’ The Stranger, Night of the Living Dead and The Magic Sword, mainstream fare like John Travolta’s The Boy in the Plastic Bubble and in fine snake-biting-its-own-tale fashion some public domain ninja-sploitation like Ninja Death and early episodes of The Master.

I salute Dark Maze on their decision to release the webisodes as ‘seasons’ on actual physical DVDs, packed with exclusive extras and cased in package art that hones back to the days of battered VHS. Order them directly from Dark Maze here.

I also salute them on their cool-ass logo, an homage to the old Canon Film’s lock-up. These folks clearly get it, and deserve our support!

And yes, I am a grumpy old “Herbert” who still likes his physical media and watching shit on a real TV from a comfy chair instead of on the interwbs, so bite me!