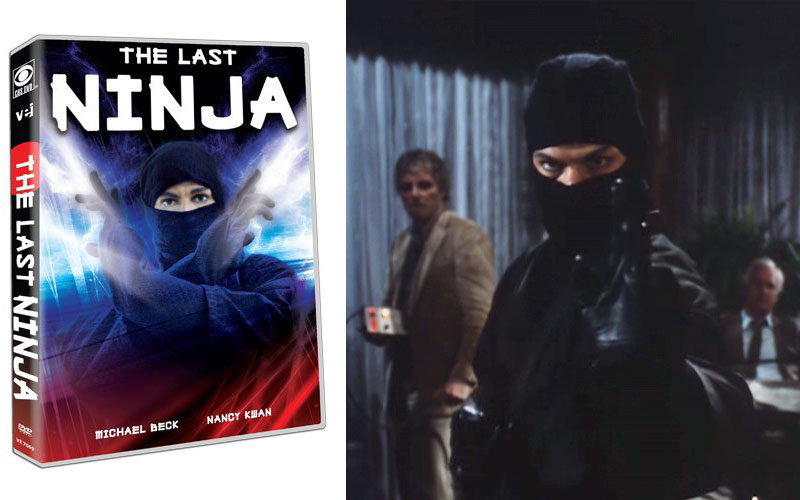 It is the 1983 made-for-TV predecessor to The Master, arguably one of if not the best 80’s American ninja craze films made, but virtually un-recognized, even during the height of the boom. It is The Last Ninja, and sometime last September (I don’t know how I missed this on City on Fire) it snuck onto the market and became available for the first time ever on any home video format, with absolutely no fanfare or pre-release buzz. 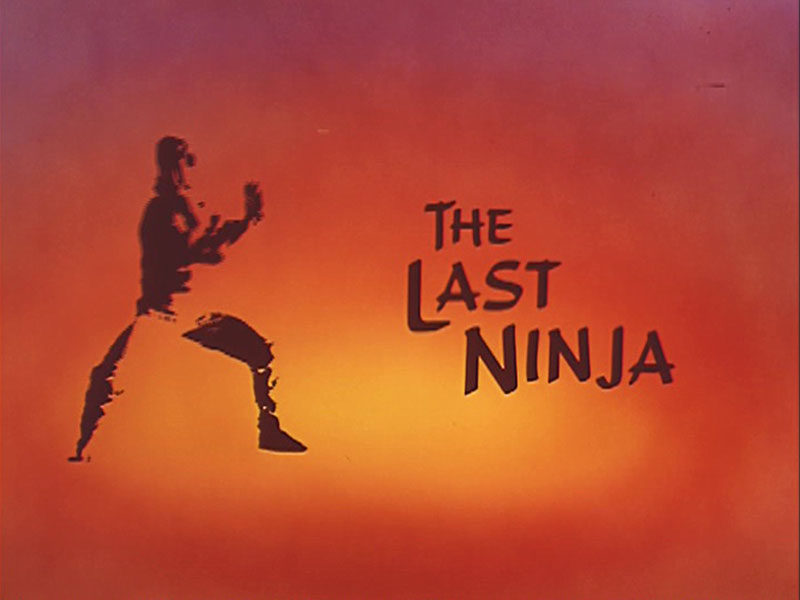 Shot in early 1983, this TV movie of the week aired on ABC July 7th of that same year, and had a sporadic subsequent airing depending on where you were in the country. It introduced jet-set art dealer Ken (Kenjiro) Sakura, a caucasian abandoned as a baby at the stoop of a Japanese farmer’s house in Northern California in the 1950s. When the two eldest sons of his adoptive family were killed in the Korean War (after deftly executing a two-man commando mission of staggering bravery and skill), his sage-like father made the fateful decision to impart the family’s ancient teachings on Ken… now the ‘last’ ninja.

Ken now practices his shadow arts in the name of justice, hunting down killers and criminals untamed by the law, until he is tracked down and pressured by a shady government agent to intercede in a terrorist hostage situation taking place at the top of an impenetrable high-rise.

Interspersed between flashbacks to a lifetime of training under his adoptive father, Sakura uses mostly non-violent aspects of ninjutsu — disguise, infiltration, psychological warfare — to save the day and form an uneasy alliance with his untrustworthy government liaison.

The Last Ninja was absolutely set up as a pilot effort for an ongoing series — one that would have resembled Kung-Fu in taking the philosophical high-road with the martial arts at its core, and also been as centered on character development and life lessons as it was action.

The resemblance of Ken Sakura to Kwai Chang Caine was certainly deliberate, as it was written by Kung-Fu co-creator/writer Ed Spielman. Producer Anthony Spinner, prolific contributor to landmark series such as The Invaders, The Man from UNCLE and The Mod Squad, was also responsible for the 1976 episode of Baretta “The Ninja.” Director William A. Graham, a prolific TV workhorse whose output ranged from 1958 to 2002 (including such legendary series as The Fugitive) crafted a superbly tight movie here, with flashback sequences of particular high quality.

And his cast was great…

Michael Beck, criminally under-appreciated iconic star of The Warriors and cult faves like Battletruck and Megaforce, had the eyes to pull off a role that would oft be hooded, and an athletic physique to at least hang with his stunt and fight doubles. Perfectly cast, his cool demeanor and reserved brooding severity made him perfect for both the Westerner raised on Eastern teachings and his ‘Bruce Wayne’ manufactured persona all at once. He was everything the “ugly American” Timothy Van Patten wasn’t in The Master six months later.

Mako, likely best known as the wizard in Conan the Barbarian and the voice of Aku on Samurai Jack, but who decades before made history in American television’s first ever martial arts fight scene opposite Bruce Lee in The Green Hornet, blesses The Last Ninja in its first 30 seconds with a killer voice over:

Centuries ago, when feudal Japan was divided into warring armies, there developed professional spies… avengers for their lords… called NINJA. Masters of the martial arts, disguise and illusion, they were seemingly able to disappear like wisps of shadows. The time has come for me, your father, to reveal to you the arts of NINJUTSU, to use them to oppose men of evil and to have no fear. You will learn all of our secrets. Your destiny is to be THE LAST OF THE NINJA.

The prolific screen villain Richard Lynch, smack dab in between being gutted by the triple-rocket-sword in The Sword and the Sorcerer and effortlessly crushing various ‘heavy’ roles on episodes of The Fall Guy, Manimal and Automan, phoned-in a generic crazed terrorist in a role given little-to-no screen time to develop. But Lynch’s mere presence sold the part and he was the right guy to cast.

Nancy Kwan, who had breakthrough roles in the early 1960s in The World of Suzie Wong and Flower Drum Song spent the rest of her career as an Asian actor in Hollywood, which inevitably meant Nam-sploitation and martial arts tie-ins. Her sister character had a ton of potential had the movie gone on to series — would she have just been Ken’s assistant, or suited up herself as a full kunoichi? We’ll never know…

Mike Stone was once again connected to a ninja project that just didn’t pan out like it should have. In a way, The Last Ninja could have almost been an apology for the Enter the Ninja he never had the chance to control a few years earlier. Stone doubled Beck for several fight scenes, and even got some screen time as one of the terrorists. That’s almost certainly him doing shadow kata ender the credit sequence.

One thing I genuinely appreciate about this flick is the costuming and gear are all custom, little-to-no off-the-rack or out-of-the-catalog fare here. I’m a registered hater of ninja suits rendered in modern camouflage, but even I kind of dig the multiple-patterned deal Beck wears in training, topped with an animal print hood!

His black mission gear is based on regularly available gi, but embellished with custom gauntlets and hood wraps of interesting contrasted textures.

One of the coolest aspects of the show was the Sakura household’s inner ninja sanctum — an octagonal meditation chamber of traditional Japanese decor, with hidden arsenals and wardrobes behind electronic doors. Not even Kosugi’s coolest fog-spewing neon-underlit weapons chest could rival Beck’s absolutely awesome shinobi ‘Bat cave’ in sheer volume and presentation style points!

As for weaponry, apart from a single shuriken thrown during a training sequence, and the fleeting glimpses we see hanging in the closets during his mission prep, there is nary a ninja-to, shoge or tandem pair of chrome-plated sais to be seen. Considering how weapons-crazed we all were back in the day, a blow-gun or some climbing claws would have been advisable. Maybe they were saving the good sharp-pointy stuff for later had the ongoing series been greenlit?

One doesn’t mind weapons-fetish or gratuitous combat taking a backseat to things like disguise and wall-scaling though, when those more reality-based espionage arts are just so damn well done.

There are four different disguise bits here that really drive the plot and are vital to both the mission and the maintaining of Sakura’s freedom from government interference. In contrast, there are also a couple of surprising bits of ancient Japanese mask work at play that put a foot in the fantastic enough to keep any ninja-nerd happy.

I will fault the film’s last act with some pacing problems. Too much time is spent on the human fly routine. It seems like a better plan would have been to get in on the ground floor, nail some unwary guards and commandeer an elevator, which would have allowed for more time to psychologically turn the terrorists minds to jelly in the final showdown. That final set piece is great in concept but stumbles a bit in execution and feels rushed. Such is television…

Why The Last Ninja fell immediately into obscurity is pure speculation. The Master premiered six months later on rival network NBC, taking a low road exploitation vector similar to what Cannon Films had perfected in theaters. That other show also had THE name in ninja-sploitation — Sho Kosugi — and the celebrity rub of the legendary Lee Van Cleef. Maybe between the cross-network competition, and the tell-tale signs of the ninja boom petering out before its time, Paramount/ABC saw little worth investing in? Perhaps Last Ninja‘s multi-faceted and disciplined portrayal of ninjutsu may have been too cerebral for the bloodthirsty audience the grindhouse and home video markets had trained?

But beyond the mystery of its lack of further development, the fact that it never saw a home video release is absolutely baffling. Recall how many alleged ninja movies one’s local video store had in the VHS era that turned out to be completely ninja-less kung-fu movies given a shameless re-title. Then remember how much rental money you wasted enticed by the lurid and explosive package art of IFD/Filmark cut-together drek, which categorically over-promised and under-delivered on genuine ninja action. Meanwhile, an outright American studio-produced excellent quality English-language full-on ninja movie with marketable stars was sitting un-tapped in a Paramount vault.

The Last Ninja, next to the failed development of Eric Van Lustbader’s The Ninja, is one of the great nexus points — the great ‘what-ifs?’ — of the 80s ninja craze. Had it been picked up, it would have stood as a fine example for others to follow of what could be done with higher-minded, more educated and ambitious treatments of ninja. But you also have to believe it would have delivered on the pure action front, too. One can only imagine towards the end of the establishing first season a rival ninja to Kenjiro being introduced, maybe Mike Stone getting a beefy on-screen role finally or even a Tadashi Yamashita perhaps? A successful weekly Last Ninja series could have given the craze the few more years it deserved.

Alas, what we got instead was decades of The Last Ninja being a shadowy legend — a vague memory to many, argued about amongst the faithful as ever having existed in the first place or being a mere fantasy, or at best mis-identified in various articles as a failed pilot eventually retrofitted into The Master. In the early 2000s, bootleg copies started circulating, and eventually a heavily compressed digital copy surfaced in bit-torrent circles and later on YouTube.

A legit disc release, alas not the boutique Blu-ray deluxe edition it deserves, is now the last piece of the 80s ninja boom to make it to our collective home video libraries. The standard def, full-frame TV aspect ratio DVD from CBS/VEI is as no-frills as a release gets, but the picture quality is a marked improvement from the digital rip we’ve all been sharing around for the last decade, so I highly recommend picking it up — it’s well worth the $14 currently on Amazon.

The packaging leaves something to be desired — the design is fine enough, evoking the American Ninja flicks, but nowhere do they tout the first time ever on home video status of this release or its historic rarity. There’s a hungry audience to be reached here, and this demure release needs to be more self-aggrandizing of its own importance.

UPDATE: More than one VN reader has reached out to us via social media on seemingly missing scenes, and it does indeed look like 10 minutes of training flashbacks and climbing scenes around minute 50 of this disc are AWOL. Also all rips of the film on YouTube have been removed by a CBS copyright claim in the past two weeks. Seems like someone finally cares after all these years…