There may not be a more beautifully shot ninja film than the 1964  artistic gem Kaze no Bushi (aka “Warrior of the Wind” and/or “Ninja Vagabond”). The set-bound cinematography is great, the use of natural light in the lush exteriors approaches astounding, there are fights that look like nothing else in the genre, even the blood is gorgeous.

Two years after holding his own against genre heavyweights in Akai Kageboshi, Hashizo Okawa returns to the ninja fold as one of the most human protagonists to ever dawn the hood. It is difficult to describe his journey from complacent layabout to reluctant hero and beyond without giving away too many spoilers, so I’ll try not to ruin anyone’s pleasure at discovering this film. Suffice to say his portrayal of bored womanizer Shinzo goes places emotionally you won’t expect.

Kaze no Bushi was directed by Tai Kato, known for his Toei yakuza films. He certainly didn’t approach this ninja film with the typical genre slant. The conventions of shinobi cinema are present, but not leaned on or hidden behind. There’s some experimenting here (most of which works, although when it doesn’t it really doesn’t), and for every typical creep down a hallway there’s a scene you won’t see in any other ninja movie.

Kato didn’t seem especially interested in night scenes, which would be a problem in any other ninja movie. These superbly shot exteriors and multi-depth set pieces are so well executed, you just don’t miss the typical ninja environs.

The high-point of Kaze no Bushi is this unforgettable (although brief) fight and flight scene amidst a maze of rocks on a beach at dusk. Subdued orange light, wide open spaces contrasting with a scurrying, tight pursuit amid jagged terrain, it’s absolutely beautiful. I can’t think of another ninja action scene this damn pretty.

As unique and masterful as Kato was here, his best accomplishment in Kaze is what he does with his lead man. Shinzo is perhaps the most human and emotionally credible hero of a ninja film I’ve ever seen. He has flaws, feels rage, shame, hurts from losses. He’s in a situation way over his head and way beyond his years of experience, and knows it. Multiple times he can take an easier path, but doesn’t. He’s a different guy by film’s end, and that’s what a good movie needs to do to it’s main. The human factor here is great.

Kaze no Bushi is on an artistic level above the genre in many ways, as unique as Samurai Spy and every bit as visually striking. It’s not an action powerhouse like Mission Iron Castle or a fun exploitive flick from the Chiba era. Kaze is more of a lush painting.

This is an adaptation of an original novel by Ryotaro Shiba, also responsible for Castle of Owls (another half-decent ninja film, if I recall). Curious to know if the superb ninja films live up to his written words, or if there was a generation of Japanese reader who rolled their eyes at these movie adaptations like we often do here. 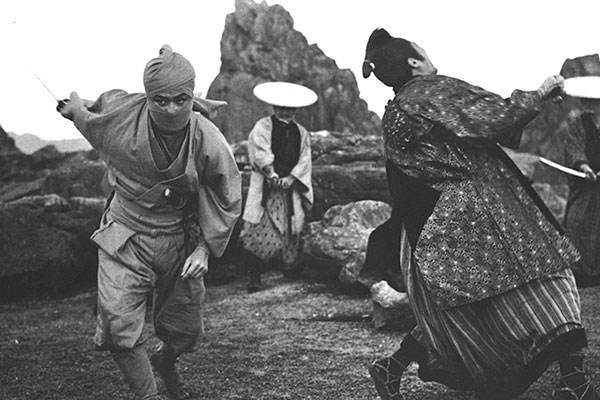