Not only is Akai Kageboshi a great ninja movie that spans the colorful flamboyant 50’s and grimmer realistic 60’s, it’s also a damn nifty TOURNAMENT MOVIE!

The tournament is one of the strongest devices in martial arts cinema. It’s single location/single set format is cheap and easy for filmmakers, it’s a vehicle for a wide variety of performers and showcases all sorts of fighting choreography in one little neat package. With a tourney movie, you don’t so much tell a story as you do “book” an athletic drama – the scriptwriter can be part pro-wrestling promoter. You don’t need necessarily much more than the competition structure to make an engaging film.

AK, though, actually balances an intricate and emotional plot with the tourney device, taking the contest’s strengths and weaving them into the layered story. Best of all, you get all sorts of interesting characters with different styles and weapons.

Off topic a bit – if you want another budo tournament movie, the same Ryutaro Otomo stars in Festival of Swordsmen, which is absolutely fantastic. Get both titles here! 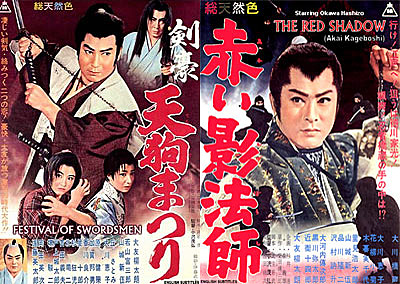