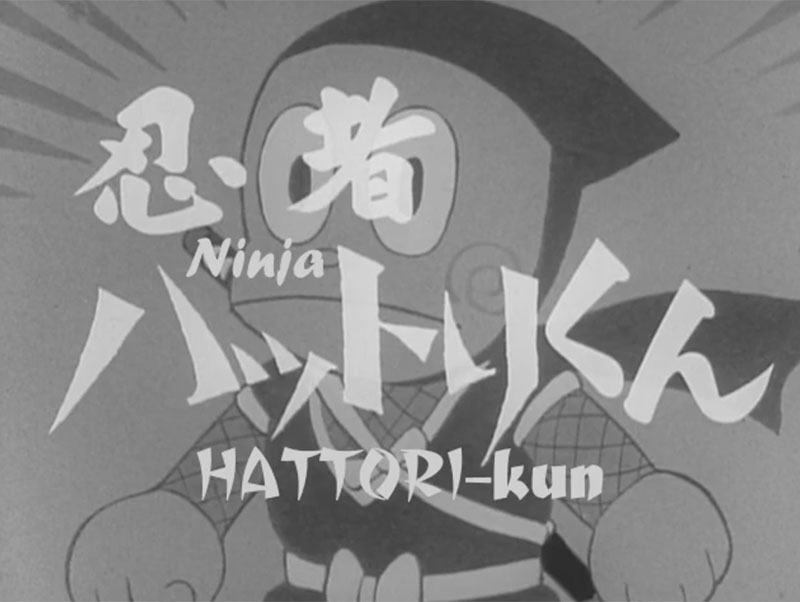 As annoying as bot-generated recommendations and algorithm retail bullying can be, once in a great while those random Amazon “hey, you might also like” messages are an absolute home run. I had missed this Art Storm EX Gokin die-cast Ninja Hattori-Kun figure back in 2015, but wow, what a great depiction of this character, who is so often troublesome to portray in 3D. 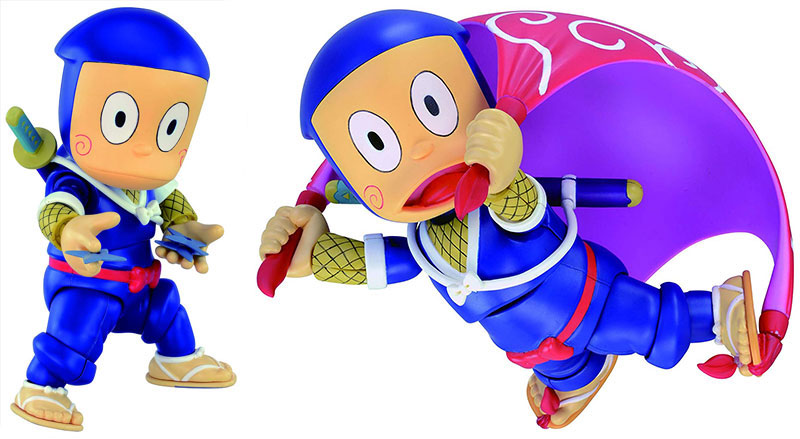 Originally a manga from 1964-71 (the apex into the downhill of Japan’s 60s ninja boom), Ninja Hattori-Kun was created by the artistic duo of Hiroshi Fujimoto and Motoo Abiko, better known as “Fujiko Fujio.” It was most famously adapted into an anime airing from 1981-87 (the 80s ninja revival) with video games and extensive licensing keeping the character alive to the modern day. A somewhat serious live action movie made a splash in 2004, and a 2013-15 anime reboot was created for Japan, China and India market co-release. With cool ninja skills (made as kid-friendly as possible, by Japanese standards that is) and a face incorporating the same appealing design elements seen in characters from Bart Simpson to SpongeBob, the impish ninja boy is an absolute icon. In contrast to the recent figure above, below is an equally ambitions metal and plastic figure from the mid-80s by Yonezawa that somewhat fails to capture the cuteness of the manga or anime: 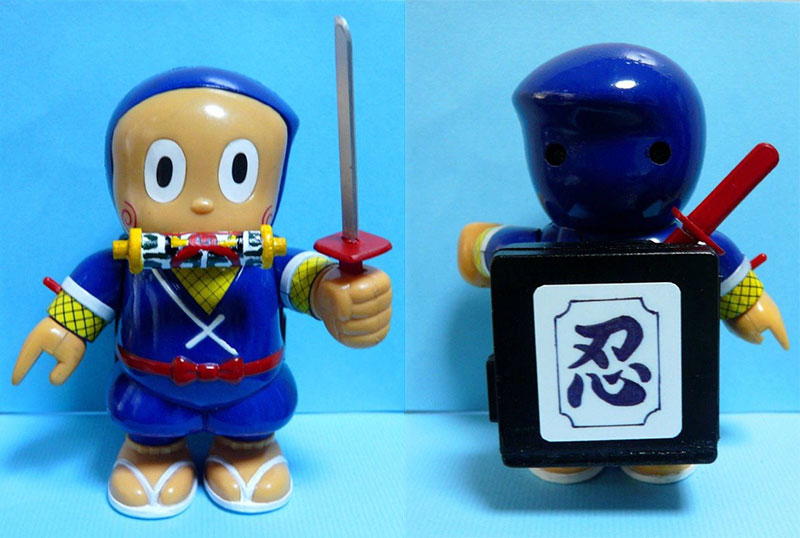 Maybe its the slight asymmetry of the eyes or bulging of the forehead, but this thing is turning a corner towards creepy. The secret scroll held in the mouth gimmick is a great idea, though, as it eliminates one major problem a lot of Hattori-Kun toys have — what to do with the coloration of the outside vs. the inside of an open mouth. The illustrated character has a well-defined red mouth as compared to the flesh tone of the face. Toy designers faced the decision of creating a false border on an otherwise smooth sculpture, or just ignoring the color entirely, which produces a somewhat unnerving result as seen here: This Medicom 6″ PVC articulated statue-like figure from 2011 is one of the few black-costume pieces of merch ever produced, and looks like it’s witnessing a murder or having a deep-ass heavy flashback… 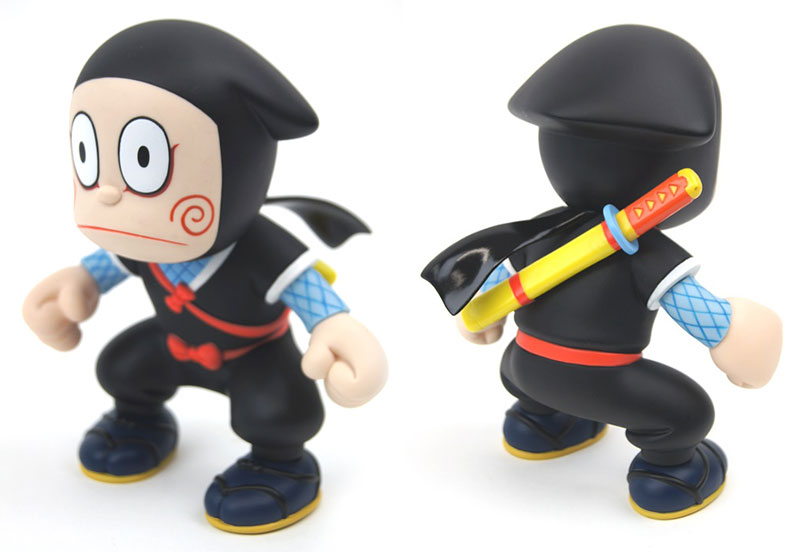 The wrongness factor of any of the above toys, however, doesn’t hold a candle to this nightmare-inducer: 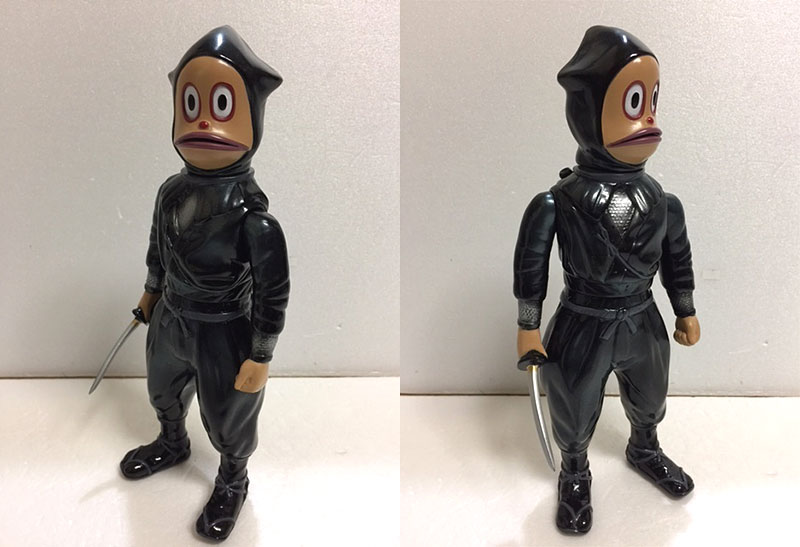 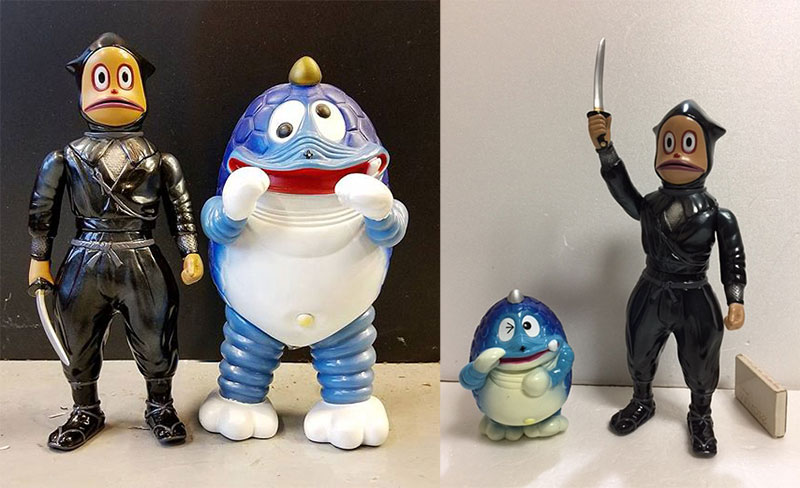 Coming out just last year for the adult collectible market in Japan, this sofubi isn’t portraying a normal ninja in a frightening demon mask designed to scare would-be opponents. Nor is it some deviant take on the character by an outré artist, or even a weird knockoff that warped in the heat of the delivery truck one summers day. It’s actually a superbly executed, dead-on likeness of what is the mother of all trauma-triggering television shows ever inflicted on the youth of a nation: Yes, it’s the live-action Ninja Hattori-Kun TV series. And it will haunt you… 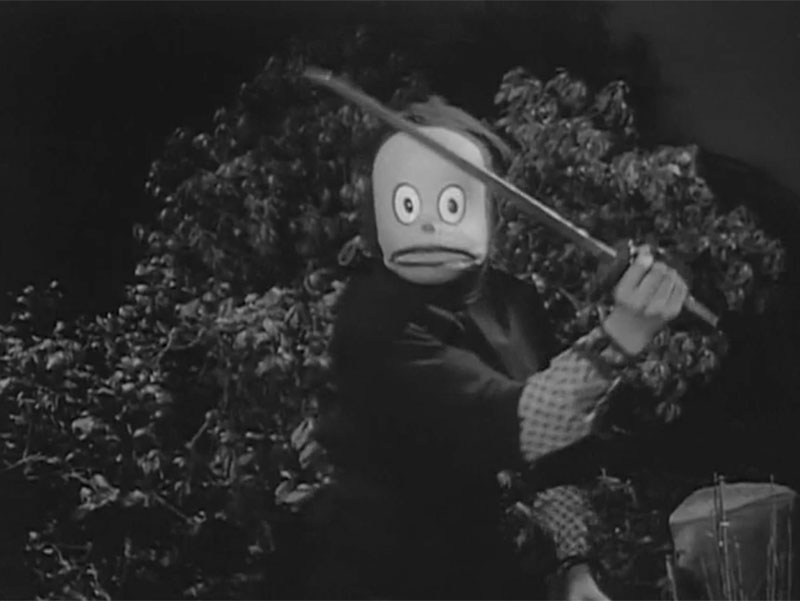 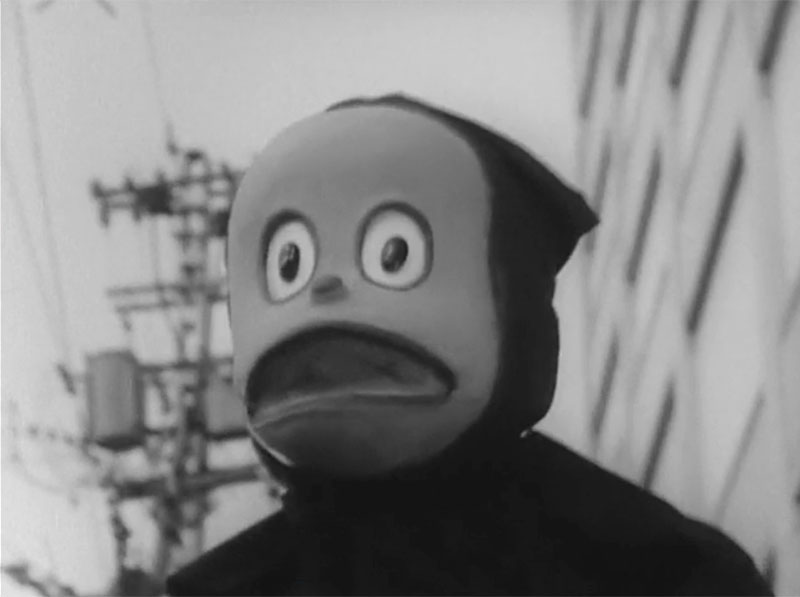 In 1966, some network TV genius bent on scarring the children of Japan decided to bypass anime development of the popular Ninja Hattori-Kun manga and jump right to live-action. Some art director then decided to portray NHK in as literal an adaptation of the illustrated character possible. Then some other poor souls did their best to construct an articulated mask/helmet appliance to pull it off. Someone else decided to bypass the illustrated character’s chubby-fingered hands and just let the human actor’s regular anatomy be the same as anyone else from the neck down.

And all of these people had to flee to Argentina as war criminals for their part in this atrocity. 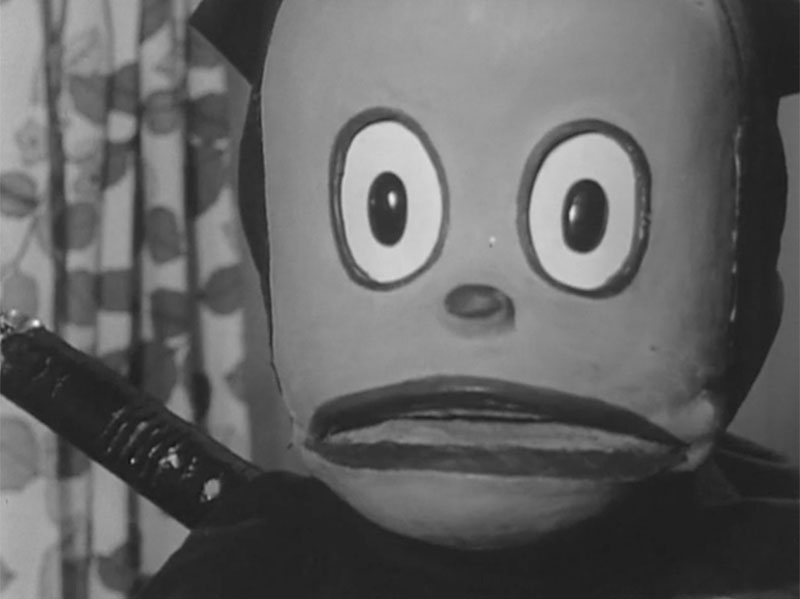 And don’t any of you start in on me with some sort of unholy love for this show, or demented appreciation of its baffling character choices as so-bad-its-good. You’re just bad, sick people, who smell vaguely of muskrat every Thursday and you probably secretly commune with ventriloquist dummies. 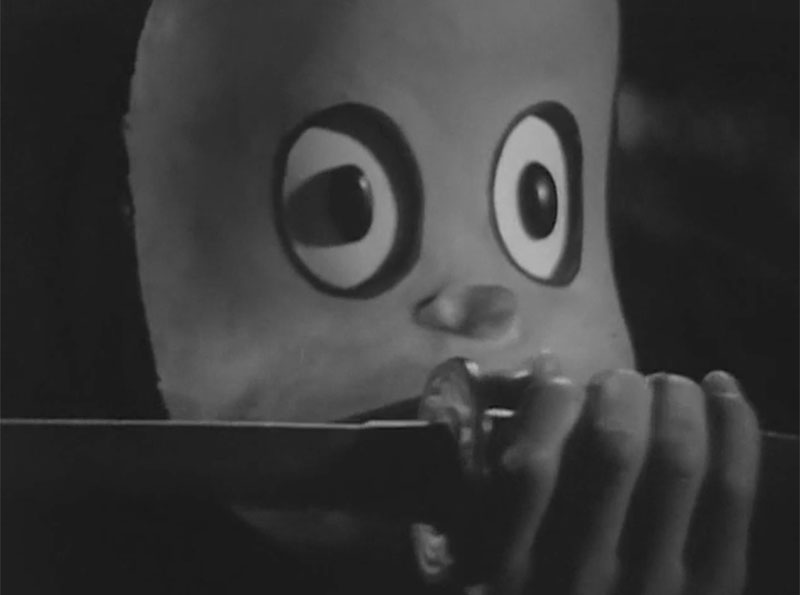 Anyway… this live-action NHK comes across like a sports team mascot, but in a classic ninja suit laden with weapons, and walking around our real world like his ENTIRE HEAD ISN’T A TERRIFYING AVATAR OF WRONGNESS! And that’s probably the weirdest part. The show begins as a pretty straight period ninja drama, ala Kagemaru of Iga, complete with an ancient master, mountain training compound, other regular ninja clan members etc. Passing a trail by combat, he decides to enter the normal world to ply his trade. 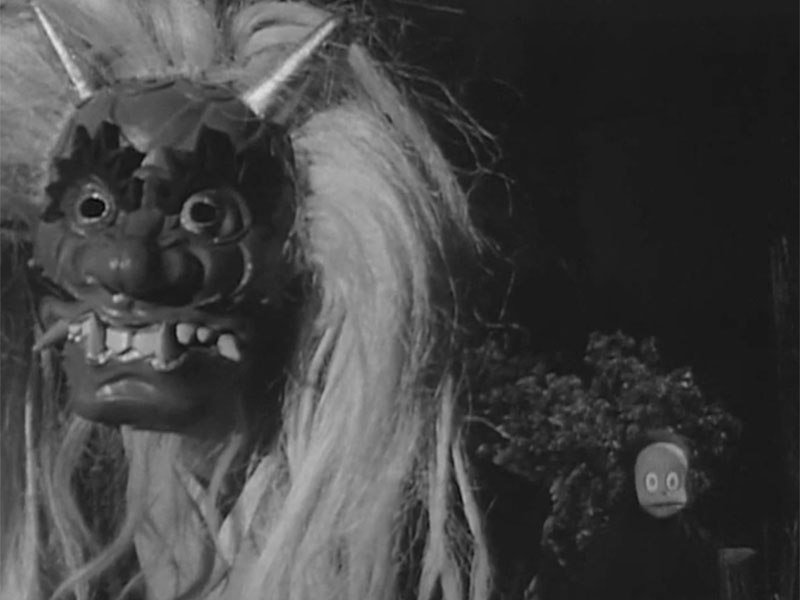 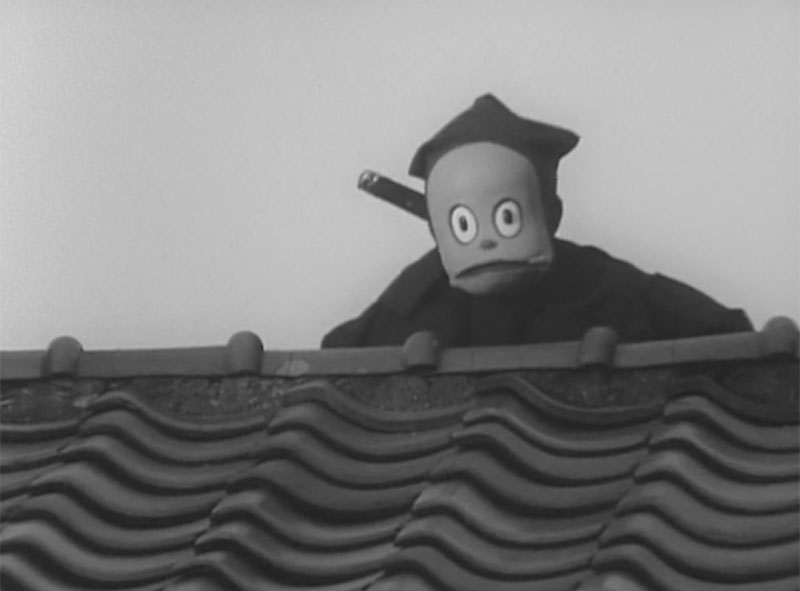 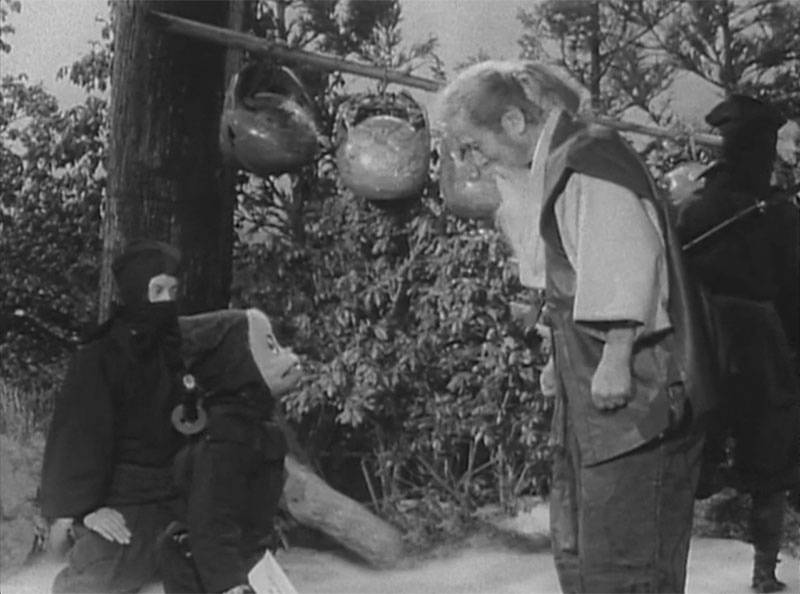 Upon arriving in modern day Japan, he’s chased by police (one wonders if it’s because he’s a sword-wielding ninja, or if its that damn face) but finds haven as the best pal of a nerdy loner kid and his alarmingly welcoming family, and swears shinobi loyalty to them in trade for a regular supply of his favorite food — grilled saury pike. Ever been in a Japanese restaurant near someone who orders saury pike? That shit is foul! So this weirdo not only has an alarming fish-face, he smells of nasty seafood, too. 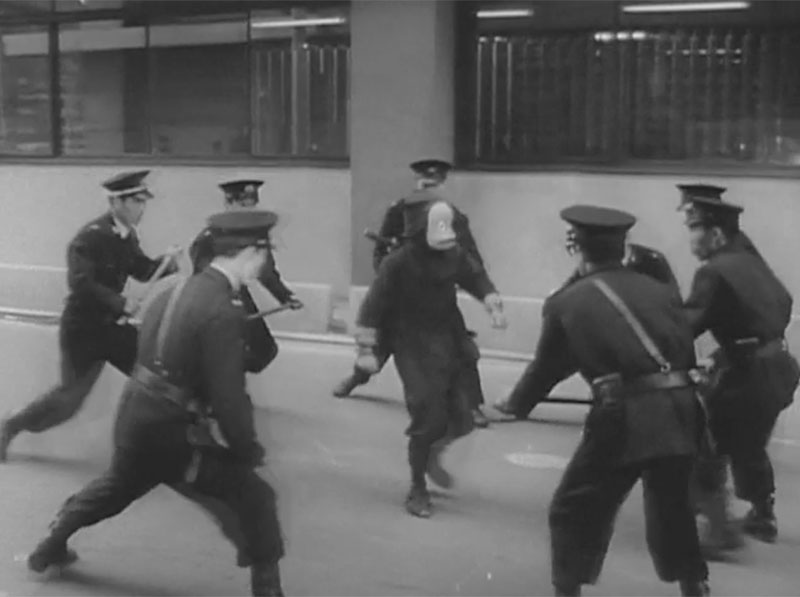 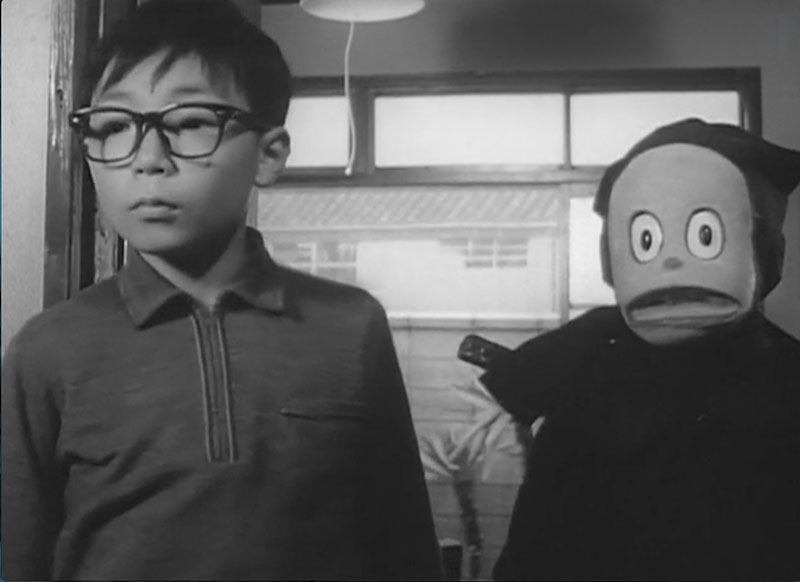 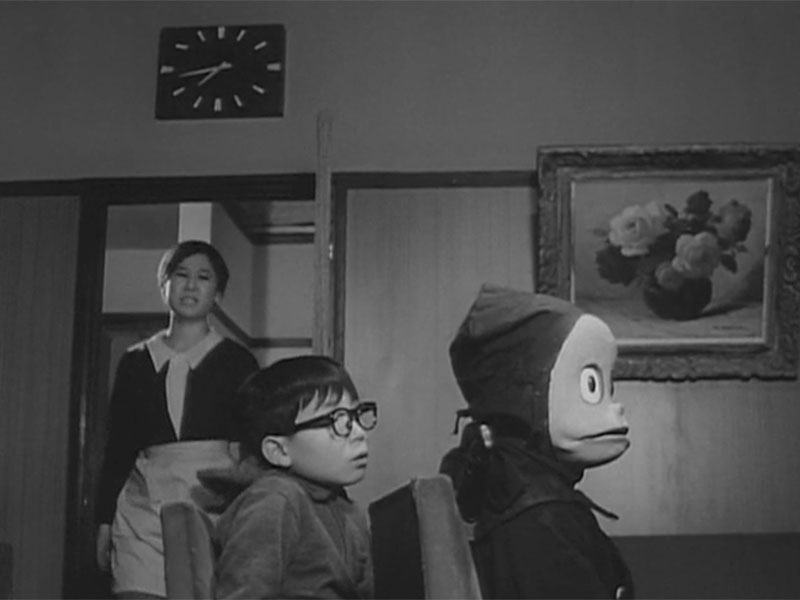 After becoming a household fixture — ala ALF or Mork — NHK eventually hooks up with the only other cartoonish entity in this otherwise real realm, a portly kaiju named Jippo (or Zippo depending on translation). Why? Because JAPANESE KIDS TV. This bastard love child of Gamera and Grimmace almost makes the aberrant wrongness of Hattori more palatable though, being another cartoon element at least. The head-scratching decision to go live-action with Ninja Hattori-Kun doesn’t end with the visuals of the character though. They actually make a serious effort, via what for TV would be costly camera tricks and special effects, to replicate some signature ninja magic skills, which in manga 9or anime) were easy to portray. NHK is more comfortable upside down on the ceiling than he is in regular human furniture. His leaping ability is super-human, and he can turn invisible and disappear at will. 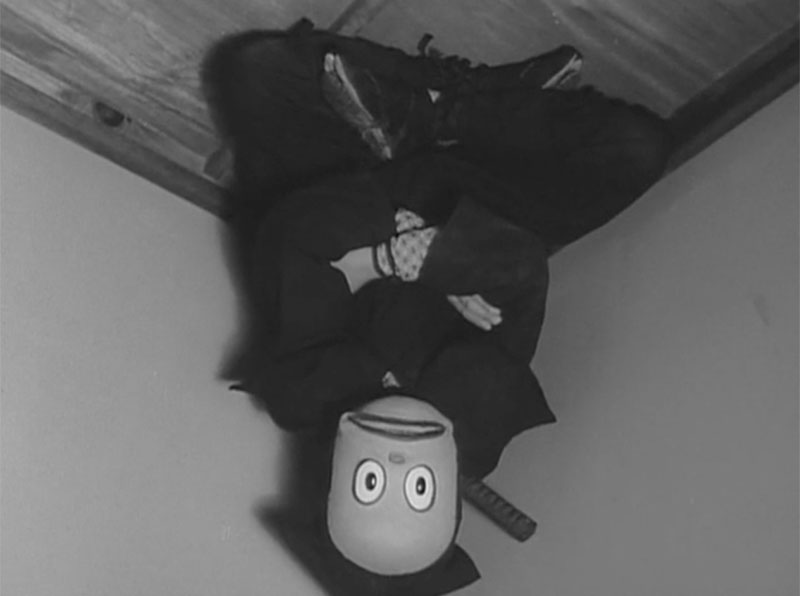 And then, as if one of his freaky mug wasn’t bad enough, he can hypnotize opponents with a kaleidoscope of nightmare faces! Pennywise or Chucky would weep… 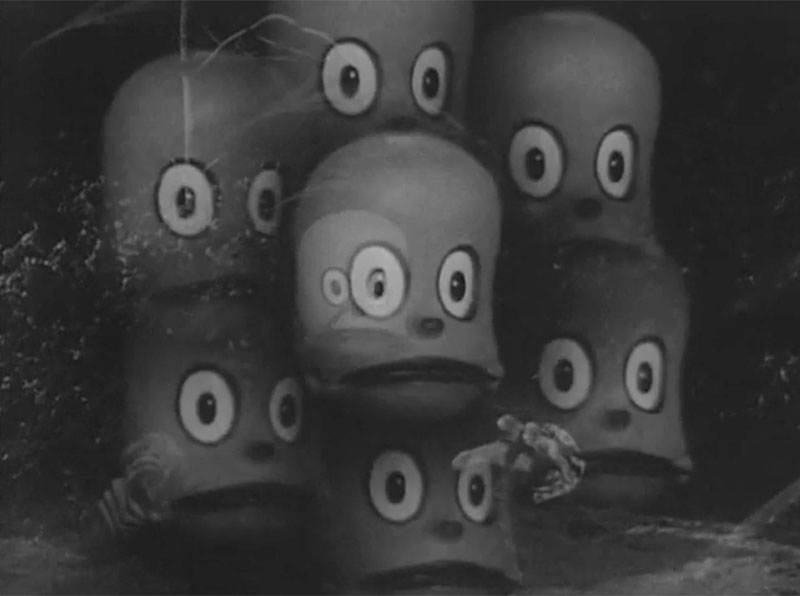 But the most unnerving of the effects moments are when they articulate the mask in closeups to suggest emotions like shock, sadness, fear and tense caution. The mouth flaps open and closed with a clapping bellows, the pupils change shape and shift awkwardly. The characters lack of eyebrows only worsens it. 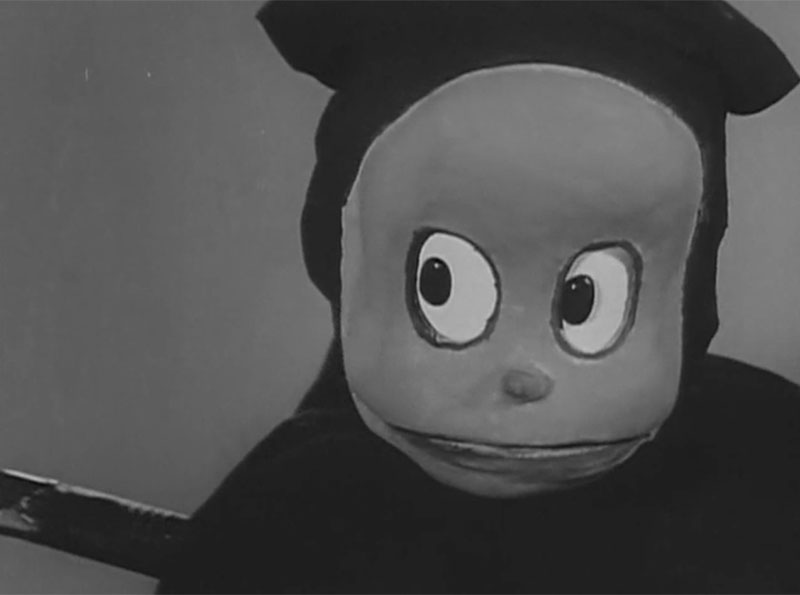 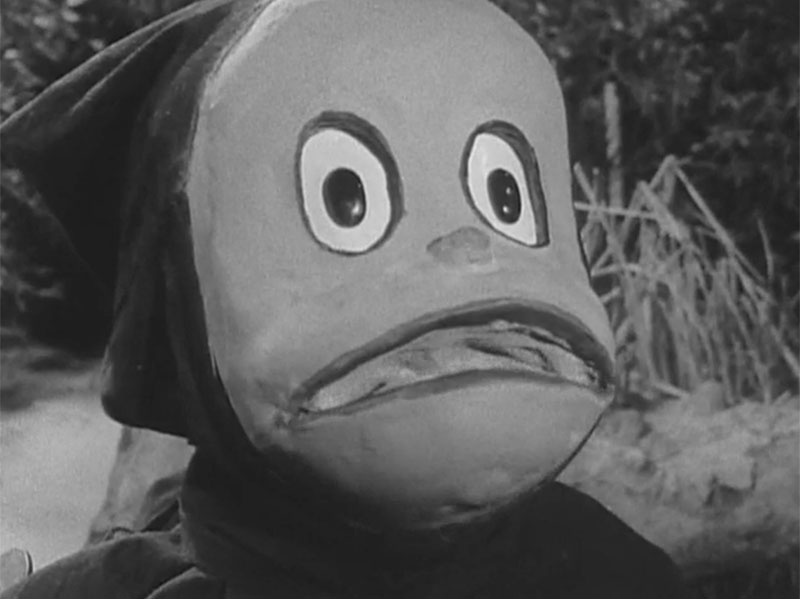 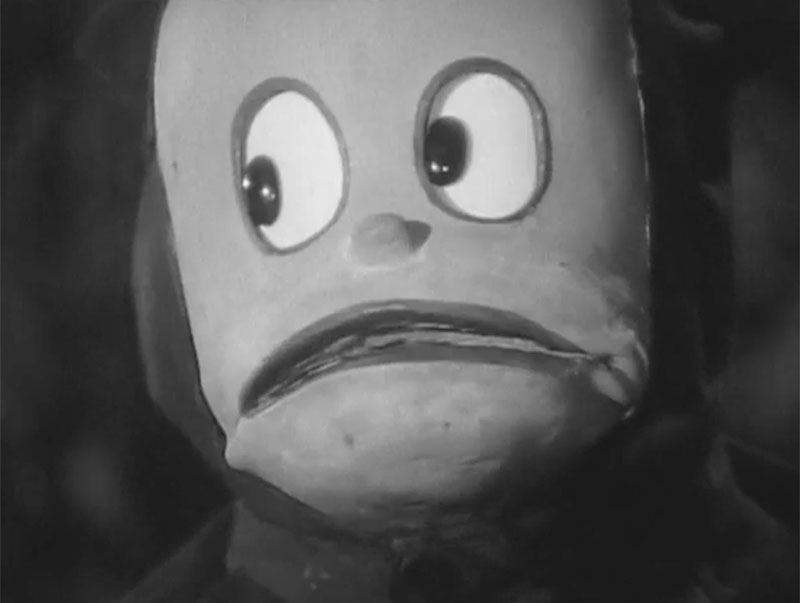 If you aren’t an emotionally scarred former Japanese youth and these visages seem hauntingly familiar, consider the similarity with these two: 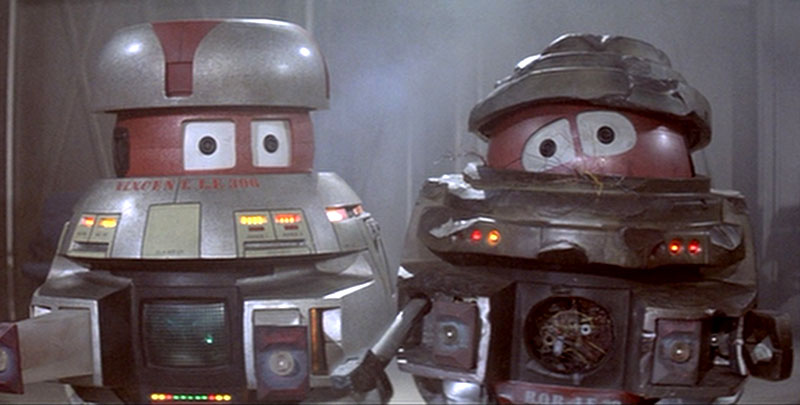 So yeah… live action Ninja Hattori-Kun might be the most wrong ninja property ever. On paper, it sounds fun as hell, but the decision to go with that articulated mask to adapt the illustrated look just kills any of the real humor the show could deliver for me and most everyone else I’ve ever shown it to. Seriously, grown-ass men have screamed at first sight of this thing.

Had they just given the actor wide-fingered cartoon hands as well as the face, I could probably deal. It would have made him a complete lifted-off-the-page manga entity trying to cope with a 3-D human world, as well as being a classical ninja in modern-day Japan. 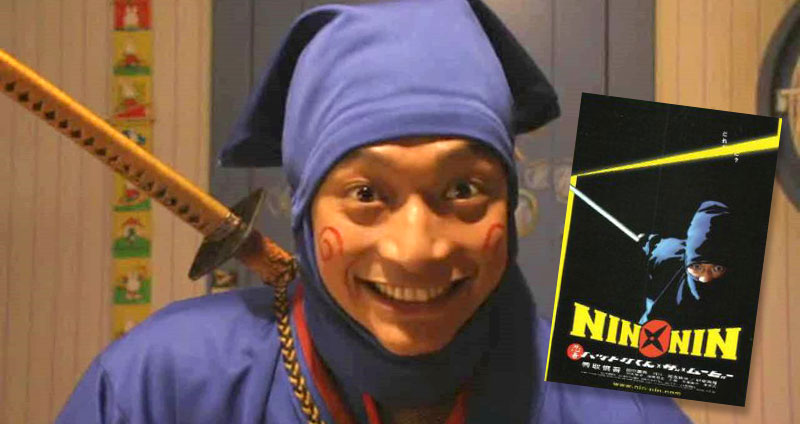 These themes were better done in the 2004 feature film adaptation (officially titled Nin x Nin: The Ninja Star Hattori for the English-language markets). With boy-band singer and multi-media mega star Shingo Katori cast as the lead, they weren’t going to hide his box-office idol face under a goofy mask, so he plays the role like a shinobi Pee Wee Herman — a childish goofball living a cartoonish life in a too-serious real world. As the adventure goes on, more of his manga/anime ninja realm starts to creep into ours, bringing real threats with it. And the movie’s perspective from 2004 allowed it to flex some meta-commentary on old ninja movie and anime tropes that are absolutely hysterical for those in the know. I recommend it wholeheartedly.

Does this mean I also recommend seeking out multiple seasons of the garish and ultra-saccharin 80s cartoon? Not so much. And you may never want to see the live action 1960s version of the character in actual moving pictures. Truthfully, it all lives on better in nostalgic merchandise…