(adapted from an article originally published on Ninja80.com)

“Ninja” is a relatively modern word that has come to summarize a wide range of military practices, martial arts traditions and popular entertainment themes in one iconic black-hooded package.

The black suit (worn day or night), requisite throwing stars and straight sword, arsenals of weird spy gadgets, superhuman athleticism, near-magical powers of stealth and hypnosis, mastery of arcane poisons and assassination techniques, fanatical cult dedication in contrast to a mercenary nature — all qualities irrevocably tied to the shinobi. However one can argue that ninja never did exist in the broadly summarized way we see them now. A lot of people profited greatly from propagating a completely unreal story of the shinobi, and there’s seven or eight centuries worth of mythmaking and mass marketing to deal with while sifting for the historical truth. 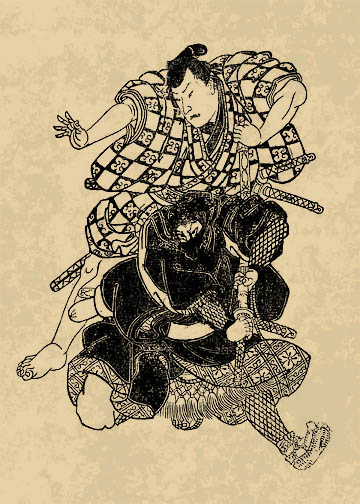 You can look at ninja history in three different aspects:

Military History (OR: A History of Common Sense in Japanese Warfare)

Ninja, or more specifically shinobi-ku — units of warriors trained in specialized commando tactics — hold a special fascination for modern military historians. In an age of ritualized combat and strict codes of battlefield behavior, the use of these units became one of history’s first organized applications of what we today call Special Forces. Typical samurai behavior, like challenging each other to duels or collecting heads of fallen rivals for personal glory, did not an efficient battlefield campaign make. So, going as far back as the 1300s, “shadow-skilled” specialists were used for then novel tasks like monitoring troop movements, mapping layouts of enemy strongholds, and targeting command figures to disrupt enemy maneuvers.

By the 1500s, feudal lords were using castle raiding units to sneak into enemy fortresses dressed as guards, starting fires or attacking other guards to suggest a fortress mutiny, generally causing all sorts of anarchy inside while the formal military crept forward outside. A variety of specialized military or employed mercenary troops throughout Japan’s feudal era can be considered under the vague “ninja” umbrella: rappa were bandit gangs used to plague enemy territories, kusa referred to special sentries hidden in tall grass, sutekamari no jutsu was the practice of leaving snipers behind retreating armies to take shots at the advancing enemy’s officers, and kesshi were suicide squads.

In the 1580s, Japan was unified by the Napoleon-like Hideyoshi Toyotomi, and 23 years later Ieyasu Tokugawa became Shogun. The bloodsoaked fuedal era was over, as was the boom period for outré military specialists and contractors. The need for shinobi-ku on the battlefield may have waned, but the perceived need of the shadow-skill set was a different matter entirely. Their techniques were seen as vital to keeping the machinations of the new peace well oiled.

Ieyasu Tokugawa perhaps saw it best, and rewarded the famed warrior Hattori Hanzo and the surviving ‘men of Iga’ jobs as his personal bodyguards. Iga province, fabled birthplace of the ninja, had been seen as a major threat by Tokugawa’s predecessor Oda Nobunaga. He invaded the mountainous territory in 1579, and was routed by a display of guerilla tactics that must have horrified the samurai army of 12,000. He returned two years later with six armies (44,000 troops) and in a brutal application of the ‘scorched earth policy’ razed the modest province and decimated its population. After Nobunaga’s untimely death, Tokugawa sheltered the remnants of Iga’s warrior elite as his own, both surrounding himself with a capable guard and eliminating a potential vengeful threat by co-opting the very people previously so feared. The example was followed by much of the new politic, ninja were a must-have addition to any insecure lord’s peacetime army.

Regardless of how legit the threat of shinobi agents actually was, ninja paranoia made for good business, particularly for anti-ninja consultants (often ninja themselves) as well as architects specializing in anti-ninja housing. Equipped with slippery walls, hidden viewports and creaking floors, these ninja-proof buildings are actually popular tourist attractions today.

Sun Tzu’s profound Art of War introduced the very concepts of special forces, intelligence gathering and sabotage to the Japanese as far back as the 7th Century AD. That seed grew into a thriving industry for samurai families choosing to specialize in “shadow skills.” Contrary to traditions of ritualized warfare and rigid martial arts practices, these services required out-of-the-box training, innovative methods, and an array of gadgetry that would baffle anyone outside the discipline.

When the age of internal warfare ceased in Japan, centuries of shadow skills were saved from obscurity by astute families adapting the successes of the battlefield to the new political era facing them. Loosely organized tricks of the trade were codified into “ryu” — what we would call ‘styles’ — sort of organic museums of martial arts traditions. Here’s where you get the vaunted “secret scrolls” being handed down through generations, rife with brushed ink illustrations of archaic weapons and curious spyware. As the world grew up and ninja were less and less needed (or in many opinions, the world caught up to the shinobi), some of these ryu endured as a sort of archeological record of a martial past.

Togakure Ryu was one such enduring tradition, and this style ensured it’s survival like no other — it embraced modern media and expanded it’s teaching’s worldwide. The style’s last full Grandmaster Toshitsugu Takamatsu spent the last 15 years of his life training the current godfather of worldwide ninjutsu Masaki Hatsumi. Together they served as technical advisors to popular ninja films and found great success publishing ninja books. Hatsumi trained Europeans and Americans in the traditions of his art and licensed them to spread the ryu worldwide, fueling a global explosion of modern ninja training in the 1980s.

Popular Entertainment (a scroll may tell a thousand secret words, but a PICTURE…)

It is the iconography of the ninja — the alluring image of the black-suited warrior with the exotic weapons — that more often than not defines “ninja.” Sensationalized notions of the ninja go back as far as the shinobi’s genuine history, and were even encouraged back in the day by families hiring-out their services or commandos planting terrifying ideas into already paranoid palace guards.

Ninja ‘fish tales’ and popular lore go back to the 1500s (and further by some definitions), and were kept alive by kodanshi traveling performers and kabuki stage dramas. Popular novels and illustrations of the 1700-1800s finally lock down the image of the shinobi in the classic black suit and sinister mask. A lot of what I call “retro-shinobification” took place, too, as historical figures were given credit for being ninja whether they had been or not. Myriad military commanders and common thieves had their portraits inked-over with black night suits and their bios spiced up with sensational shinobi activity.

In general, popular lore became popular media and the image and notion of what the public WANTED to believe was “ninja” replaced any credible military history or martial arts tradition.

This humble article is less about ninja history than it is an illustration of WHY ninja history is so challenging. The skeptical historian can call B.S. on the very existence of ninja, the martial arts student can have blind faith in the pedigree of his “secret way,” and the movie buff can wander the grey area in between.

Then there’s this thought – even if it’s all a bunch of hype, isn’t 500+ years of lore and sensationalism history unto itself?

The writings of Stephen Turnbull