If you’re a dinosaur like me, then you still dig physical media and package art when it comes to your video library. To that end, I’m a regular customer of the Warner Archive DVD-On Demand service. Tons of great titles, especially if you’re into 60s and 70s made-for-TV sci-fi and horror fare. Not so much by way of martial arts films or classic Japanese cinemathough, save for this nugget which was just made available: 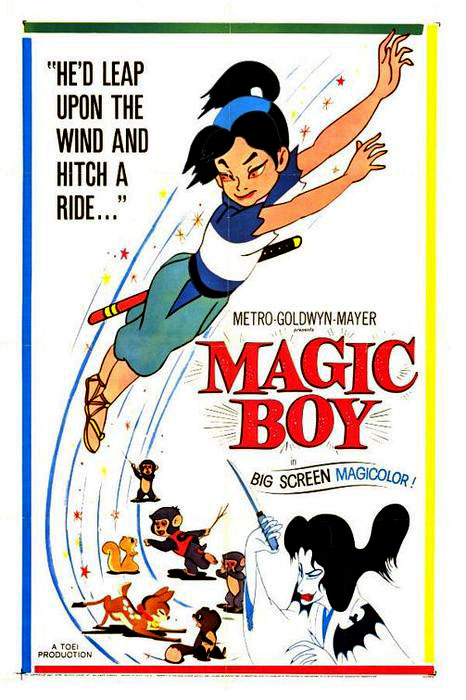 The 1959 animated feature Shonen Sarutobi Sasuke was given an English treatment by MGM and released a year later as Magic Boy. There may have been some low-rent video tape releases of this, but I believe this is the first time a clean, crisp digitally mastered version has seen the light of day, and in its original 16×9 aspect ratio, too.

From the Warner press release:

MAGIC BOY (1960) Magically-gifted boy Sasuke lives in peace, deep in the forest with his animal pals and his elder sister, Oyu. After their forest sanctuary is violated by a demon witch who devours one of Sasuke’s animal companions, he vows vengeance. Leaving the forest, the boy sets out to master his magical gifts by making a pilgrimage to the home of the wizard, Hakuunsai. While Sasuke learns the ways of magic, Yakusha, the demon witch, terrorizes the countryside, and Sasuke works to complete his training in time. Magic Boy aka Shunen Sarutobi Sasuke is a classic piece of anime history — the first full-length animated feature produced in Japan to reach the shores of the United States. With much of the original storyline left untouched and centering on pop culture staple hero Sarutobi Sasuke (think Bomba the Jungle Boy crossed with a ninja), Magic Boy is an enchanting precursor to decades of imported Japanese ani-magic. 16×9 Widescreen