It is THE single most recognizable icon of the 80s ninja craze, practically a logo for the ninja boom in and of itself — and one that has endured for decades.

It is THE KOSUGI KICK! 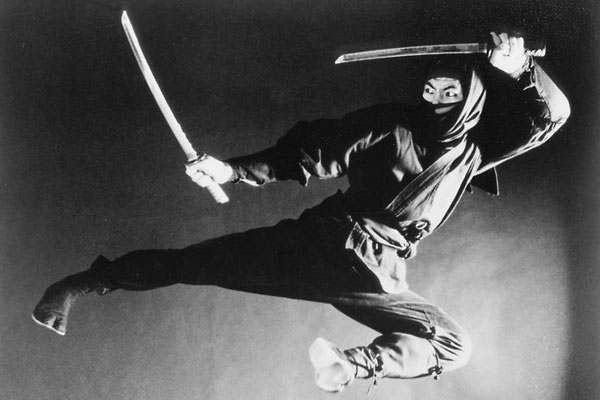 Shot in a Hollywood studio for the Enter the Ninja press kit, the double wakizashi-waving jump-kicking Sho Kosugi was painted over for the film’s movie poster, ad slicks and subsequent home video packaging. The only other official use of the shot was years later in movie industry trade papers during Canon’s interest-stirring efforts for American Ninja (both the recycled Kosugi Kick and a composited shot of Chuck Norris in the Ninja III: The Domination green ninja suit were used in such ads before the project was rebooted into the Michael Dudikoff vehicle).

But the image had serious legs outside official usage. If photographers could realistically collect royalties every time their image was duplicated or directly lifted, whoever shot Sho that fateful day would be a billionaire.

The Kosugi Kick wasn’t an original idea, rather a carefully calculated effort to evoke the familiar image of Bruce Lee’s famous jump kick, primarily from a press still of The Big Boss, but with their own new stamp. This would be OUR jump kick. 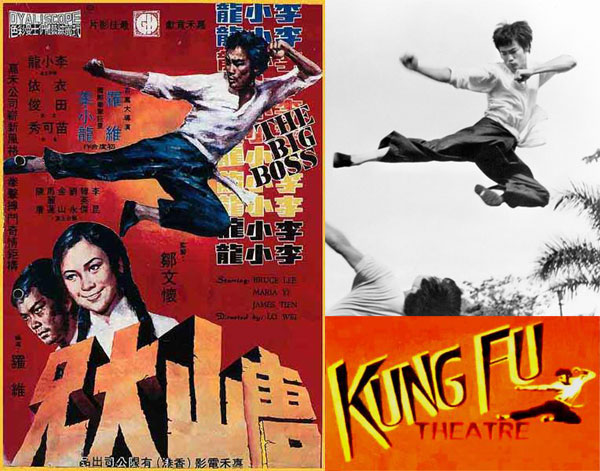 They took the all-too-familiar pose (an icon and virtual logo of 70s kung-fu grindhouse itself), added the soon-to-be-famous black suit and a couple of swords (and note they’re off-the-shelf samurai swords, not the “ninja-to” that would quickly follow as a merchandise juggernaut) and declared THIS IS THE 80s, LET THE NINJA DECADE BEGIN!

And so it did.

The Kosugi Kick was quickly cannibalized by video game companies for packaging and arcade marquees, cheapie toy manufacturers and myriad knock-off merch pirates, book and magazine cover illustrators, and so many more one can hardly keep track. 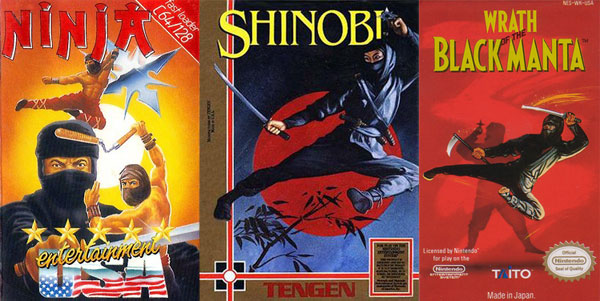 But we want to! Or at least try…

Thus, our open call for help from you, our fan base who love this stuff as much as we do, but hopefully with more free time on your hands.

Below is the tip of the iceberg, images we’ve casually collected over the years in various categories. We want more! Send us whatever you’ve got that has a knock-off Kosugi Kick to krainville-at-vintageninja-dot-net, we’ll follow this post up at some point with a major collection. 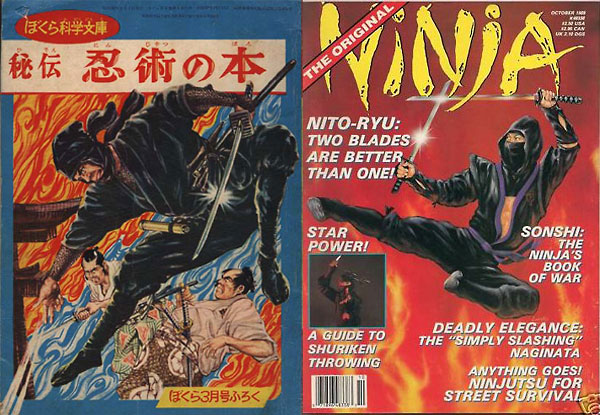 Was the above book from the 1960s Japanese craze a prehistoric ancestor of our beloved Kosugi Kick? And just how many issues of the 80’s Ninja magazine featured a rip-off of the famed photo? Help us find out! 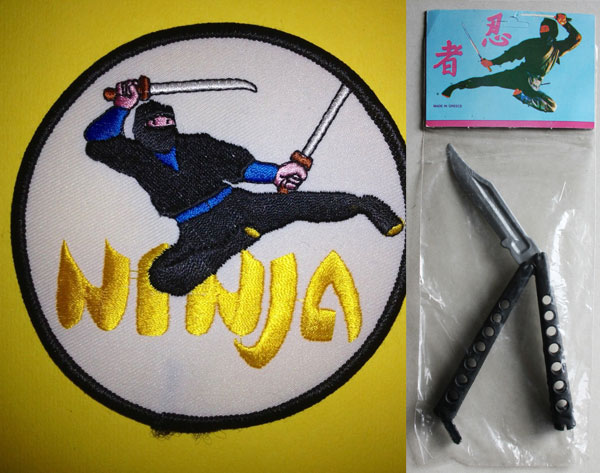 Kosugi Kicks come in all shapes and sizes, with varying degrees of chicanery. The pose is in Public Domain, so manufacturers re-render the pose in their own art style at will. But, you do also see some outright theft of the original Kosugi classic. 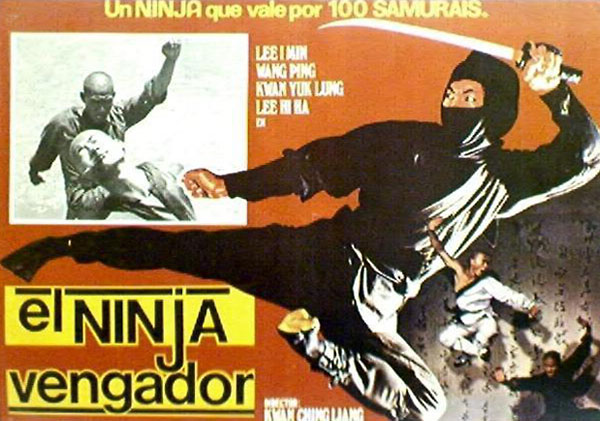 We love seeing it in posters for other movies. Again it’s typically a knock-off illustration or painting, but sometimes they’ll use the real deal, like the Mexican lobby card for a kung-fu flick seen above. The fact that the home video packaging for one of the Master Ninja tapes (below) had to knock it off is a real head scratcher… 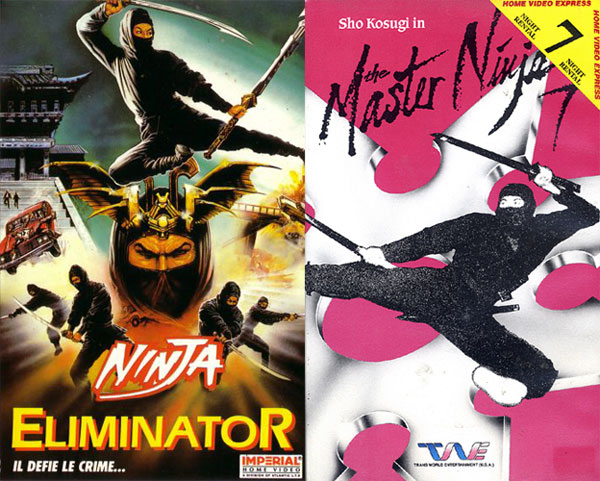 They take the form of delicate porcelain… 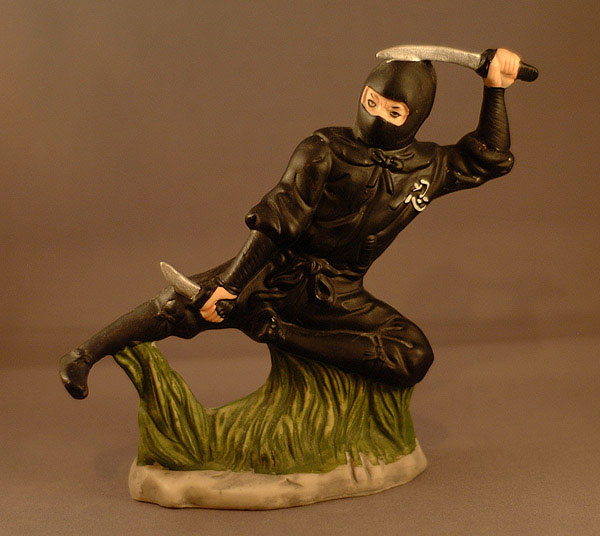 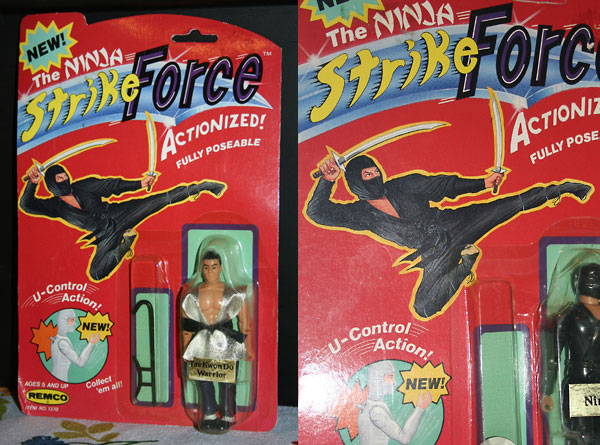 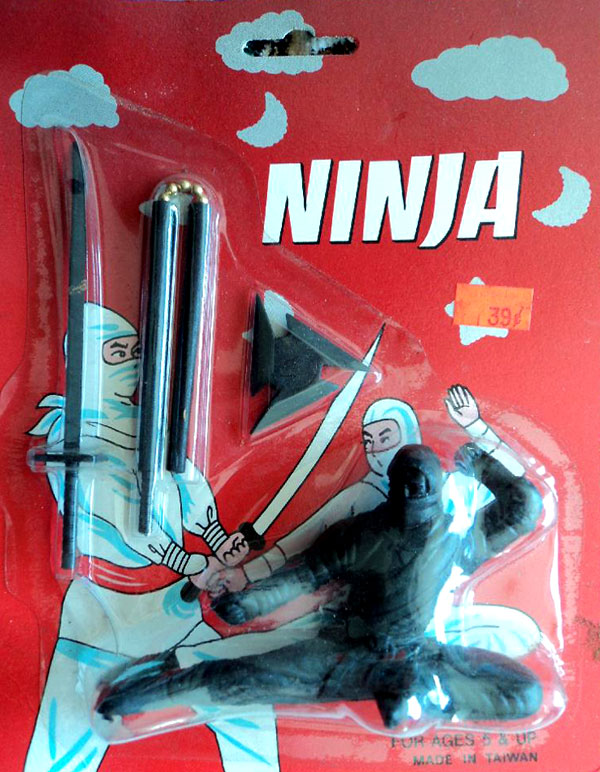 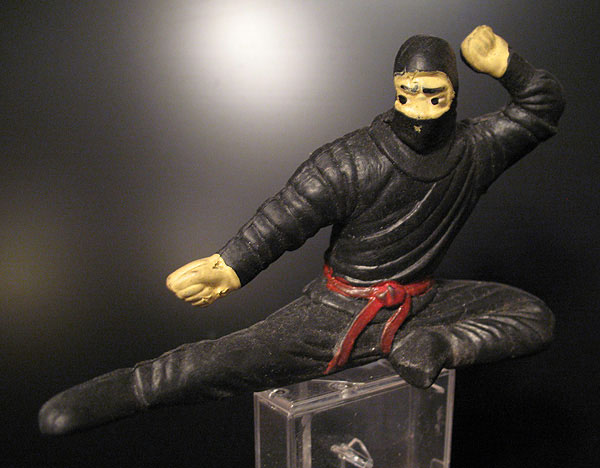 Sometimes the pose varies, with a more upright stance and a bent leg here and there, but c’mon, we all know the inspiration for these images.

Shower us with your findings folks!

Once again, that email address is krainville-at-vintageninja-dot-net