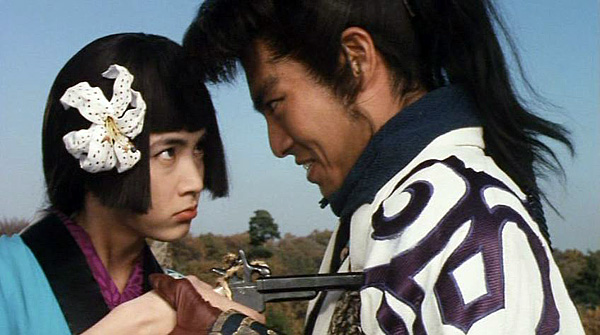 Alright, so Japan’s burliest sword goon and the cutest pistol-packin’ bounty huntress EVER have been whisked away to the magical land of gold along with a hundred ninja, their spy master, a circus troop and a lunatic cave man. Time to really mix things up with some hulking warriors right out of an archeological dig! 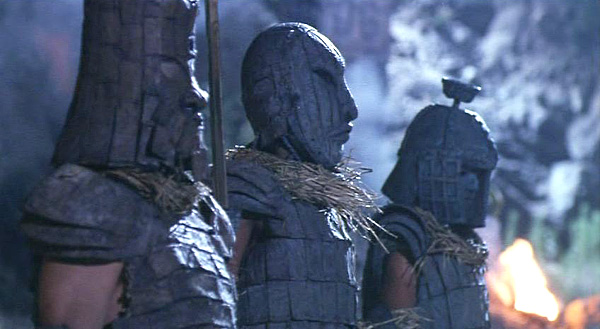 Based on Jomon Period ceramics, these costumes are just beyond cool. One of them is rather Dai Majin-like, no? 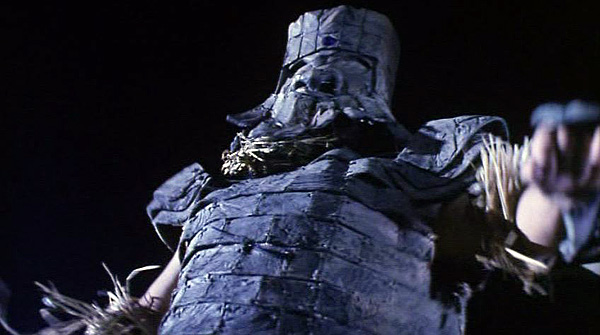 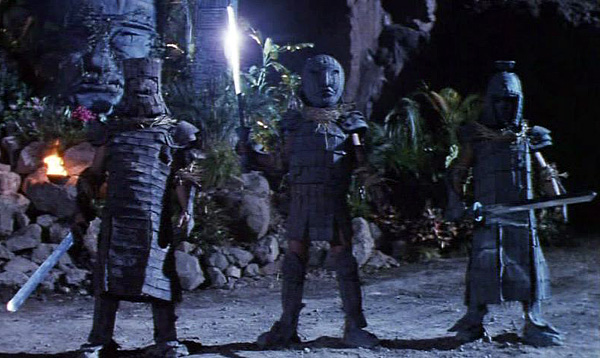 In the midst of these martial artifacts is this Egyptian-y, Sumerian-y who-knows-what-y warrior woman who under that stone mask is quite the barbarian babe! 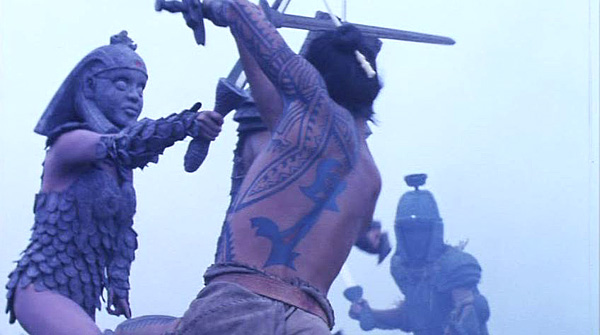 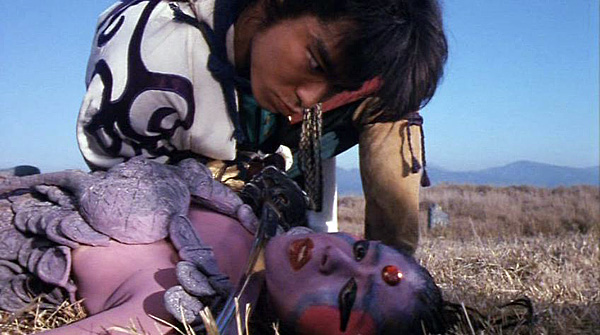 But the king of Zipang takes the cake. His bulky armored battle suit is modeled directly from “Dogu” god statuettes from Japan’s prehistory. These things are universally attributed by ‘Ancient Astronaut’ theorists to be space suits worn by extraterrestrial visitors, but Zipang provides a more sound and logical explanation – they were MECHS! 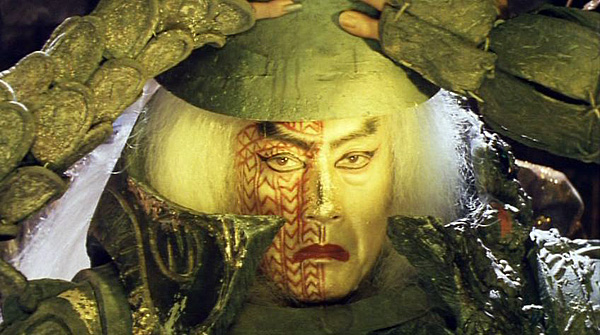 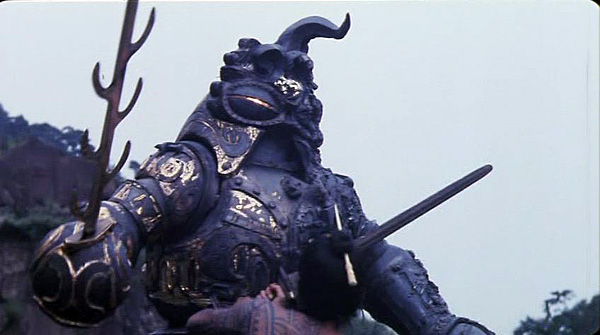 This suit was pretty damn huge, and must have been a bitch to move around in on set. He doesn’t exactly sprint around or get into a Douglas Fairbanks-level acrobatic duel or anything, in fact the movement is right up there with the best of classic sci-fi cinema’s clunky metal men. 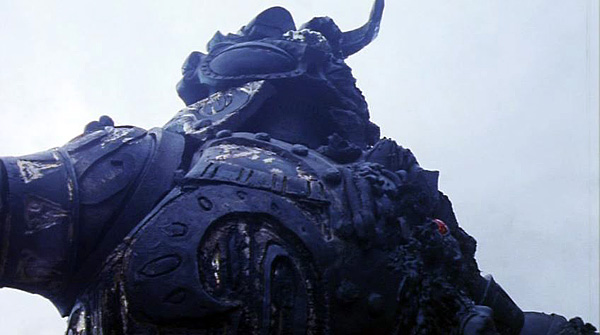 And the unlikely mech/tech doesn’t stop there. Hanzo’s demented arsenal of  espionage gadgetry is unrivaled in ‘Bamboo Punk.’ C’mon, this is a movie about a magical land of gold populated by mythical monsters and immortal cave men… there really isn’t a need for historical credibility here. 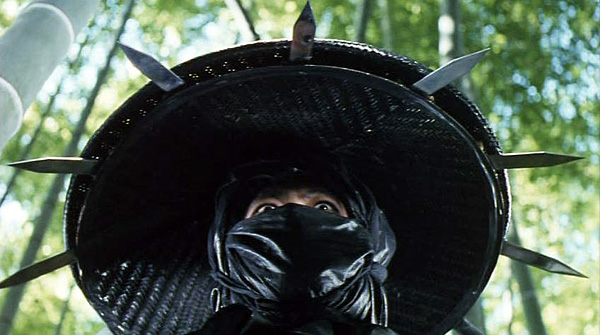 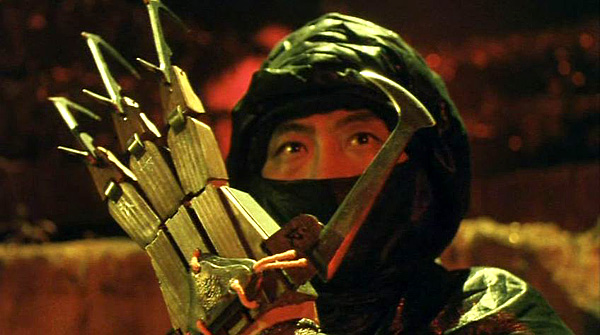 The ratchet-and-wire-sprung claw thing above is a replacement for a hand lost in combat. It can launch off his arm like a Shogun Warrior’s missile hand, with grappling line and everything. Even more absurd (read: awesome) is a binocular/camera rig which codes color photos onto shuriken-shaped discs, which are then thrown into the wind where they home in to HQ. Note the ray skin on the housing, like a katana handle. Nice detail… on an absolutely ridiculous prop!

‘Hanzo’ ends up being a pretty fun character (although his outfit looks like it’s made of lawn bags). He’s obsessed with completing his mission to steal the sword to a fanatical degree. His army has all sorts of silly skills, like burrowing through the ground ala Bugs Bunny. But they also move as a cohesive and well-disciplined unit. When the inter-dimensional vortex opens, they try to snag their master out of it by forming the biggest ninja human pyramid ever. 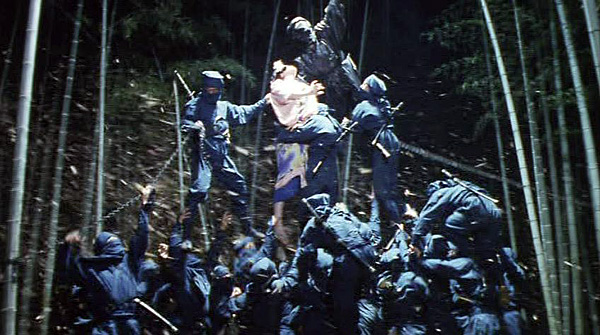 So yeah, Zipang has enough wacked-out shit to keep you guessing throughout what is (inevitably) too long a movie. It gets mired down in the third reel with a lot of conversations and emotional conflicts. However up to then there’s enough cool ninja stuff, beautifully filmed fights and Yuri the Pistol cuteness to carry me, and then some. The stone age Japanese warriors are a rare treat, and the make-up effects and costuming are just great. 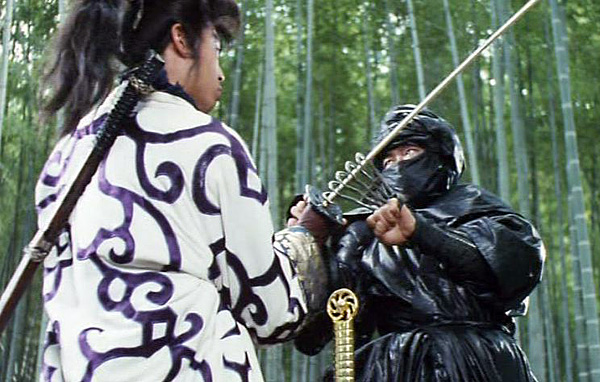 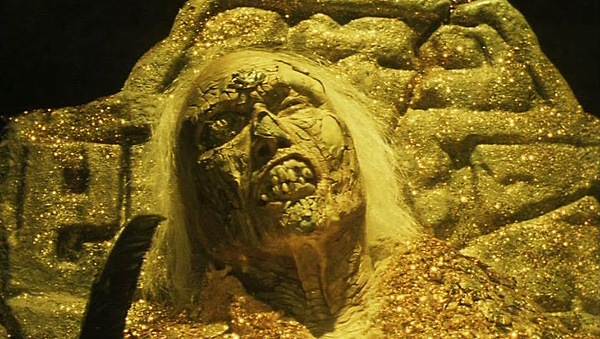 Plenty of grey market editions floating out there, including subbed prints from Britain and Taiwan, but the best looking, longest running and best translated is Kurotokagi‘s.