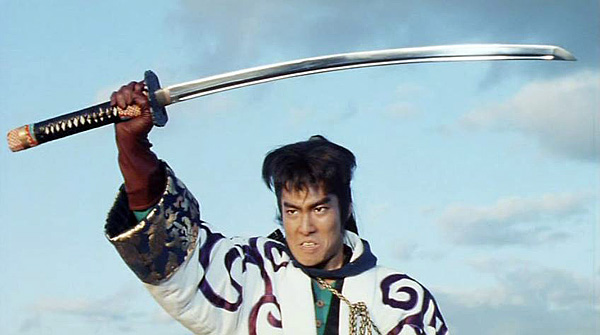 Colorful, crazy. Ambitious as hell. All over the place. Fun. Frustrating…

All describe Kaizo Hayashi‘s 1990 epic  Zipang, a positively wacked-out genre bending inter-dimensional adventure littered with exotic warriors and fantastic costumes. This thing is either hitting on every beat of jidai-geki pop culture or can’t decide what it wants to do and won’t commit. Either way, the first-time viewer is left guessing what’s coming next and is pretty exhausted by film’s end. 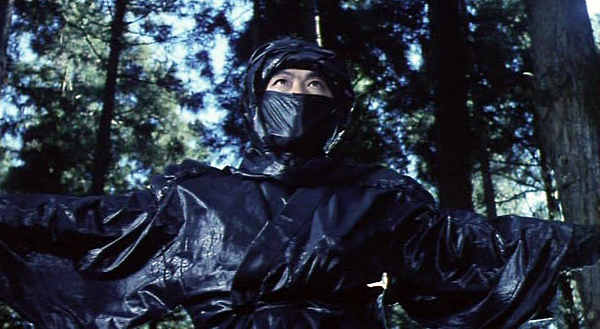 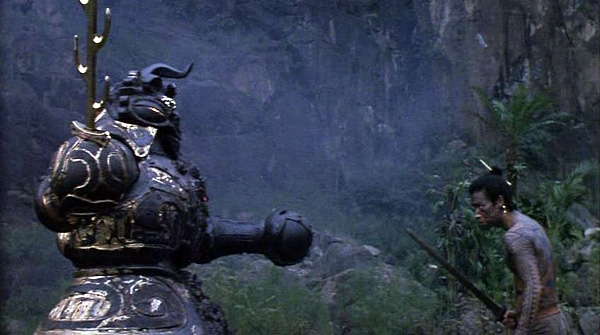 The skinny: Zipang in the mythical land of gold that lies somewhere beyond this plain of existence. A magic sword is said to have the power to transport one to this affluent dimension, so everyone’s after it; from a warlord’s loyal ninja Hanzo to a primitive cave man/prophet to the most colorful swordsman in Japan. 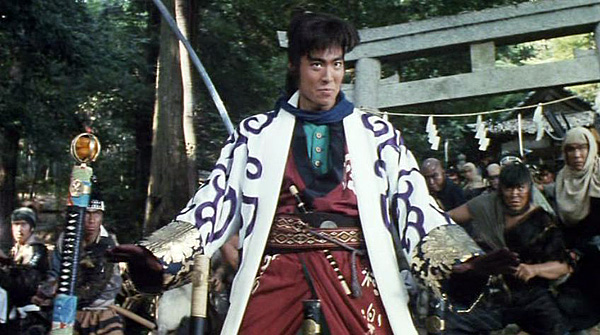 Enter Jigoku (played by the imposing and expressive Masahiro Takashima) part time Kabuki actor, part time square-jawed adventurer, and leader of a band of circus performers with outre warrior arts of their own. One of them is a caddy, carrying around his master’s myriad gimmicked swords, doling them out by number. They also have a pet baby elephant so creepy I don’t even want to mention it again… ever… Brrrrrrrrr…

The film begins with a dizzying assault of genre parody, wherein Jigoku takes on just about every franchise sword hero out there and slashes through as many chambara cliches as time will allow.

Besides this pretty-damn-funny sequence, there’s also a phenomenal battle with a horde of basket-hatted soldiers on a rather familiar narrow bridge. Jigoku finally meets his match, though, in the form of the cutest damn bounty hunter EVER, Yuri the Pistol!

Narumi Yasuda plays this perky little go-getter armed with a double-barrelled musket pistol and the cutest bangs in Japanese history. Swoon! The impossibly adorable Yuri is the real gem of this movie, chasing the sword, trying not to fall for Jigoku, and ultimately serving as the level-headed catalyst who makes sure everyone’s fighting for what’s right.

The pursuit of the sword spans two dimensions, the mythical blade changing hands from the circus troop to Hanzo’s ninja army (a rather disciplined and impressive group) to a screaming stone-age primitive thrown from his own time. 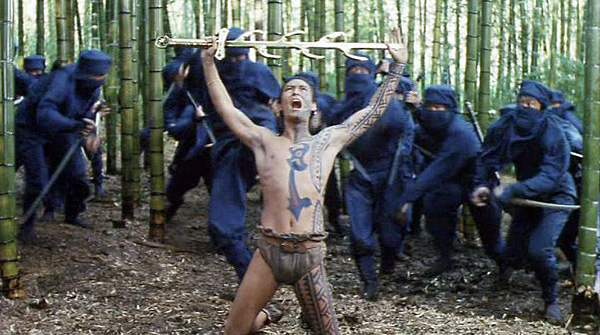 We’ll look at some rarely, if ever, portrayed figures out of Japan’s ancient past tomorrow, as well as Hanzo’s wacky arsenal and yet another cute chick!