The hit of last year’s Monsters and Masks Month was the aging collection of press stills from the 1961 Toei programmer Strike of the Jaguma (Kaiju Jaguma no Moshu). So this year I thought we’d take an in-depth look at the film itself, which has some of the coolest masks ever seen in Japanese cinema.

Strike is a one-hour serial-like adventure, part of what would have originally been a double bill of period-set flicks aimed at kids. There are a lot of similarities in tone and structure to the Republic serials American children flocked to for Saturday matinees; everything here is white-hat heroics and over-the-top black-hat villains.

A gang of thieving kidnappers has the locals terrified. Called “The Jaguma,” they dress in outre demon masks so frightening rumors persist they are actually otherworldly creatures. No home, no matter how well fortified, is safe, and beautiful women are their targets.

The Jaguma’s muscle is a massive gorilla-like monster that I will confidently refer to as a YETI because of its white coat and interchangeability with a dozen or so other critters in snow-bound horror flicks from around the globe (man, if only Snow Beast had a suit this good).

There’s plenty of room for interpretation as to wether or not this is a actual yeti or simply a burly gangster gimmicked up in a costume. The filmmakers made little or no attempt to hide the man behind the mask, not even a simple black-out hood. So maybe he’s just the weirdest of the weird tribe of cutthroats, or a furry perv with a Son of Kong fetish?

But then, it is super-naturally strong and impervious to sword wounds.

But then again, they’re not even trying to hide that zipper! Hmmm. Maybe I’m looking for logic in all the wrong places here.

Anyway… Japanese cinema superstar Satomi Kotaro plays the film’s hero Jutaro. The black sheep of a revered samurai clan, he lives an adventurous life on his own terms. His father’s been charged with stopping the Jaguma, so in he comes to aid the cause from the shadows.

Martial skills and an apparent background in pro wrestling are going to come in handy!

In a relatively single-dimensional flick like this (it watches like Golden Age comic books read), the menace at hand is often the real star, and the Jaguma are absolutely spectacular villains.

Shinobi-like skills of ambush and infiltration abound, as does historical ninjutsu‘s “Onibi-no-Jutsu” (The Art of the Demon’s Fire) – described by Masaaki Hatsumi in Ninjutsu: History and Tradition as the use of pyrotechnics coupled with devil masks as a psychological attack.

SIDE RANT: See, this is why people are obsessed with the notion of ninjutsu and the alleged place of ninja in history. Cuz it’s so fucking cool! Do Tae Kwon Do or Brazilian Jiu-Jitsu have codified techniques for blasting roman candles at superstitious guards while wearing a devil mask? Fuck no…

I don’t think the classical shadow arts had any formal technique of the tactical deployment of a yeti, though.

Jutaro battles the monster thug two or three times, the final battle coming down to hand-to-hand combat. Luckily, the beast’s arsenal of sumo-esque moves and Mugatu-like flailing are no match for some good Aikido, and…

After hurtling the yeti-man-thingy into a tree trunk (evidently fatal), it’s on to the final showdown with the Duke-A-Numba-One Jaguma himself, and his bull whip anchored by a wheel shuriken. Look out!

Again, simple kid’s stuff here. Good defeats evil, the scheme by a corrupt official is foiled and a crooked merchant is revealed to be blah blah blah… The plot is entirely forgettable. The Jaguma and the yeti? Positively unforgettable!

You can score this flick for $15 from Kurotokagi. Like with a lot of the stuff I’ve featured this month, monster fans may get a bigger kick out of it than strict Jidai-geki buffs. As both, I think it’s a damn hoot!

We’ll leave you with another look at some details from the vintage press stills from last year’s post (check out the whole set here): 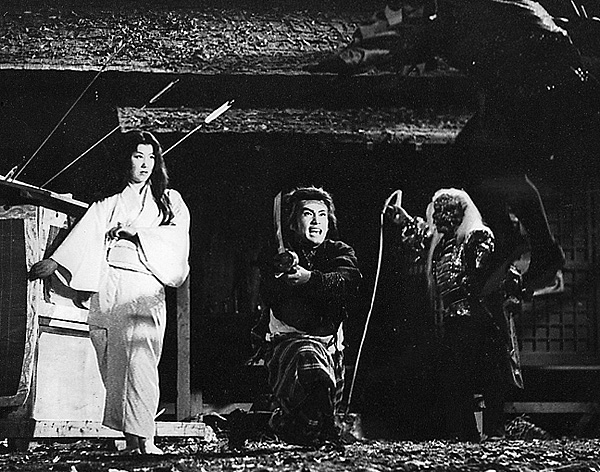