…there was The Last Ninja. Michael Beck, perhaps known best as Swan from The Warriors, was hot on the heels of action masterpieces Warlords of the 21st Century and Megaforce when he made the ahead-of-its-time TV pilot about a lone honkey ninja adventuring about the USA. 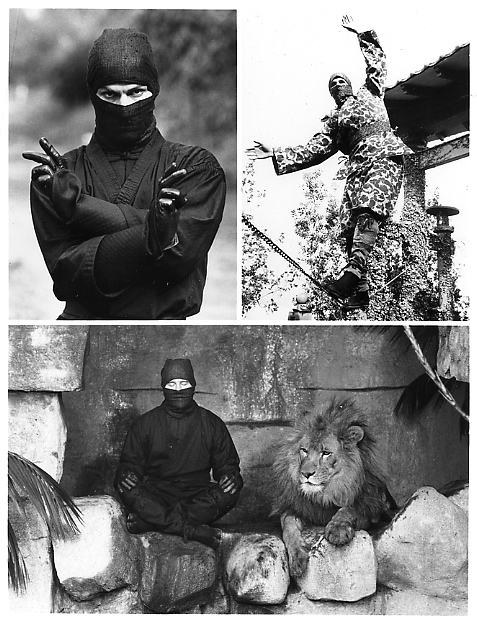 Now, I haven’t seen this movie, as it’s not in print and not even that common with the yo-ho-ho set, but this press sheet has me thinking I didn’t miss much back in the day.

I think Beck looks great in full night mission gear, but I cringe at the cammo suit.

Note the conspicuous lack of WEAPONS here, sort of a major component of our love of ninja… His Dr. Doolittle act with zoo animals is hardly a replacement for an enemy’s eyeball dangling from the end of a kasurigama, or a the light of a bright full moon eclipsed by an ominous cloud of blowfish poison-soaked shuriken, is it?

Here’s the promo copy on the back of the press pic: 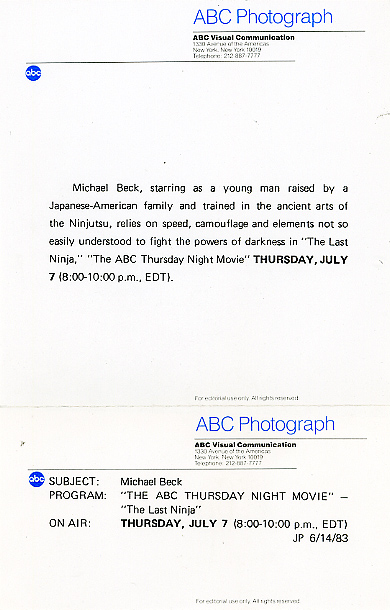 The descriptive on the back of this publicity 8×10 is remarkably light on flourish that would actually engage an audience. I myself would have certainly mentioned “exotic ninja assassins, as seen in Shogun” maybe, and the phrase “at which point our hero draws his sword and becomes a gore-soaked windmill of death” would have appeared at least twice in the TV Guide listing.

Six months later, the decidedly goofier series The Master would drive yet another nail in the coffin of the American ninja craze.

If only The Last Ninja property had taken off, we might have had some kick-ass crossover action. Beck beheads Timothy Van Hamster and steals his boss van, Mako fights Sho Kosugi and Lee Van Cleef at once… Oh what could have been.