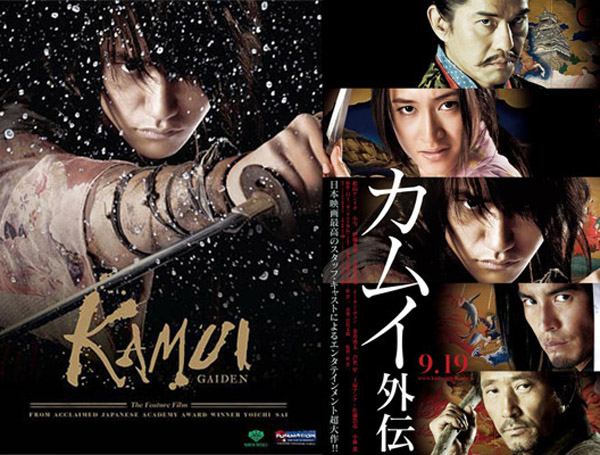 Just before the holiday, I got a screener of Funimation‘s 2-DVD release of Kamui Gaiden, allegedly the most expensive ninja movie ever made, and one that has received about as wide an array of responses as I’ve ever seen. Epic. Masterpiece. Fun action film. Laughable silliness. Boring failure. CG so bad it’s good. Faithful to the classic manga. Failure to capture any spirit of the classic manga. There was a classic manga??? Really all over the place.

I first saw this film on bootleg DVD a few months back with subtitles that left a lot to be desired, then watched the official release twice over Christmas. It’s left me in a quandary. Because reactions from film festivals and now home video release vary so much, I hesitate to give an outright review here. There is a frequency humming in this film that really resonates with some, while others can barely make it through the 2-hour plus running time. So I think you all should give this movie a good watch for yourselves and see where you lie.

Not that I don’t have my opinions! Boy do I ever…

But I’m going to save my critiques of Kamui Gaiden for a larger commentary (a series of posts over the next few days) on the decade that has now passed, a decade of digital ninja.

Oddly enough, I’ll start that commentary with a look at some yellowing old pulp. 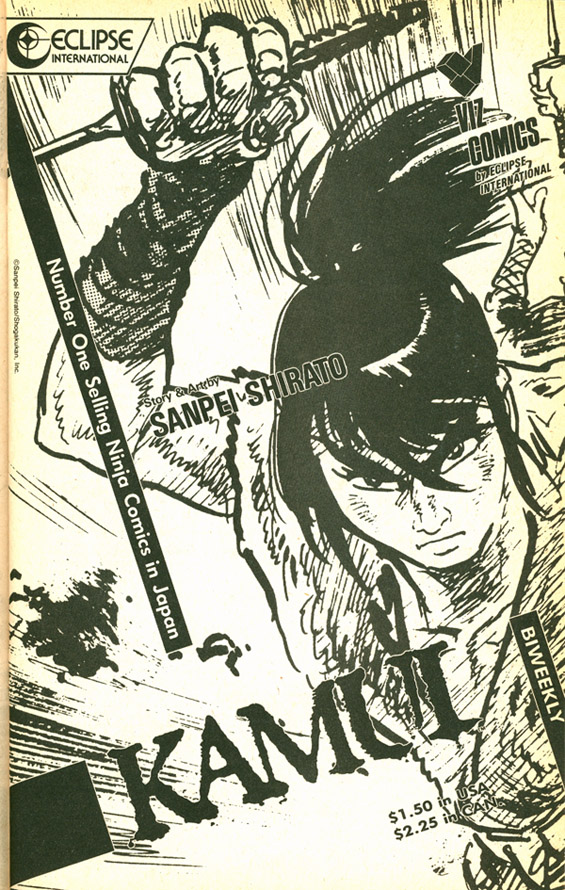 This trade ad ran in various comic book industry newsrags in the Summer of 1987. The American craze was waning and I had just graduated high school, so I wasn’t necessarily looking for a ninja comic in my life. The closest comic store was a half-hour drive and I had no car, so keeping up with a title was a challenge. I would fortunately rediscover the Viz/Eclipse co-venture, a real piece of manga history, in the mid 90’s as a ‘quarter box commando’ rummaging swap meets in Michigan. 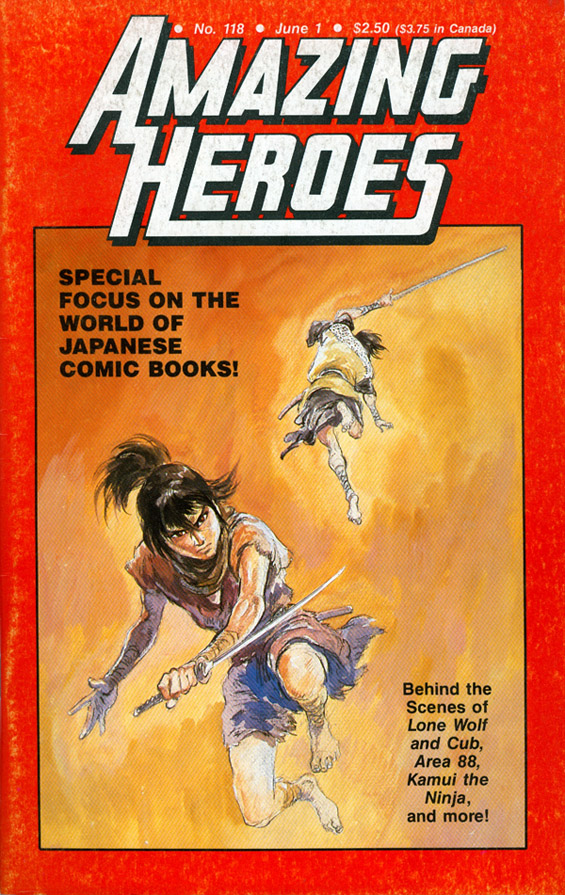 Late as it was in the 80’s boom, or maybe American comics were always independent of the fad, 1987 was a very good year for shinobi manga in America, with First Comics‘ Lone Wolf and Cub reprints closely following The Legend of Kamui (aka Kamui the Ninja and Kamui: A Genuine Ninja Tale). The former would run longer, with celebrity covers plus Shogun Assasin and Lightning Swords of Death all over cable and VHS rental shelves. Kamui wasn’t full of black-suited assassins and it’s politics and social commentary was thoroughly Japanese, so it didn’t connect with as huge throngs of fans as it should have. Neither title would see the 90s for one reason or another. A real shame…

Shirato Sanpei‘s “life’s work” first appeared in 1964, the marketable anchor of the cutting edge, often outré alt-manga anthology GARO. Already established as the master of ninja manga since the late 50’s, and as responsible for the Japanese craze as any other media figure, his Kamui Den (The Story or Legend of Kamui) was a monster hit that ran for eight years and spawned a 26-episode anime in 1969. It introduced a young, supremely skilled lone ninja on the run, relentlessly hunted by the clan (and life) he was trying to escape. Sanpei would reinvent the property in 1982 with the much grimmer Kamui Gaiden (The Other or New Story of Kamui), same ninja on the run, much heavier social and political commentary. The two series were thoroughly of their decades, both in art style and editorial message.

It is Kamui Gaiden that came to the U.S. in comic form in the 80’s (more recently reprinted in TPB form by Viz), and the acclaimed “Island of Sugaru” storyline that started the second incarnation is the basis for the new movie. Its 13-issue arc wove a simple narrative (Kamui flees pursuers and connects with a fisherman’s family on a small island, only to have fate close in on him with tragic results) that was rich in layered messages and complex emotions, never mind some really weird left turns.

Did the filmmakers succeed in stuffing it all into one film? Do epic comic book adaptations ever really work? And can a digital shark look even remotely real?

Find out next time…