OK, so the Kamui Gaiden manga had a major pedigree in Japan, and its ground-breaking U.S. release separated the men from the boys of late-craze ninja fans. So why are we just getting a movie now?

The “Island of Sugaru” storyline had all sorts of elements that made it largely un-filmable in the analog era. Kamui’s repertoire of completely over-the-top signature martial arts bordered on superpowered pro-wrestling. The best of Hong Kong’s wire crews wouldn’t have tried these gravity-defying grappling spots on a bet, and the Japanese industry never had the same level of stunt skills. Then there’s the major sub-plot involving a band of shark hunting pirates who slice the sea-breaching predators to pieces in mid-air. Feeding frenzies and human carnage galore. No way that’s happening with practical effects. 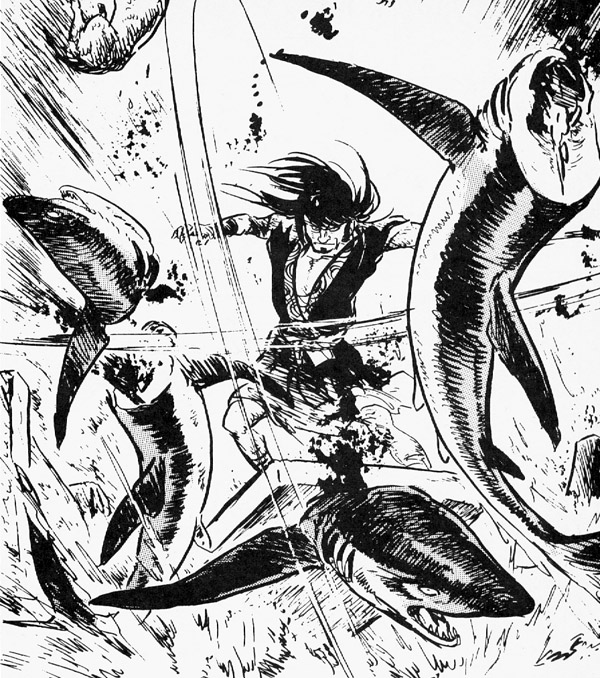 So that made Kamui a great prospect for this ‘finally we can do it with modern digital effects’ environment we find ourselves in. It wouldn’t be the first time hard-drives and Wacom tablets lit up to render digital ninja though, this had been going on in both Japan and America for a decade, sometimes out of similar necessity, sometimes out of ambition to put a new take on familiar territory. The results have been mixed to say the least. Here’s a short list of high and low lights, and the lessons future filmmakers could have learned from them:

1999: OWL’S CASTLE – the remake of the 1963 classic Castle of Owls used newly available digital toys in often unnecessary ways. Distractingly digitized rooftop runnings, castle interiors more pixelated than video games, embarrassingly obvious composites and animated fake human figures – all served to distract more often than they aided the film’s narrative. And all set trends for the next decade. We ran it all down here last year.

The Lesson: New toys do not a good movie make.

2001: RED SHADOW – made great strides in digital day-for-night and CG shuriken, innovations that saved TIME on set, and time = big money. The new Akakage was an enjoyable film if you were completely ignorant of its tokusatsu roots. Inexplicably bereft the kaiju elements of the source which CG could have really taken to a bigtime movie level, we instead got video game-style costumes and video game-level CG animated ninja leaping over castles.

The Lesson: Smart digital post can save you a ton of time during principal photography. Oh, and NEVER write the monsters out of remake of a monster show.

2002: BLADE II – daywalking vampires use futuristic neo-ninja-like gear to shield themselves from light. Great fight scene that suddenly becomes laughable at the end when stunt performers are replaced by rubbery but stiff-moving CG figures. See it here. This scene really set a precedent. We’re still seeing filmmakers pulling this shit now, and its as unconvincing today as it was in ’02.

The Lesson: When you’ve hired stuntpeople and fight crews, USE THEM, don’t replace them with CG animation.

2003: AZUMI – digital as a last resort in an otherwise superb practical-effects showcase. CG (good for the most part, with a few awful exceptions) was used to enhance the fight scenes, remove wires and harnesses and composite the pop-star lead into exploding set pieces unsafe for any stuntwoman. They rarely if ever animated fake humans and for the most part bad CG never yanks you out of a period-set film.

The Lesson: A great way to get a convincing town demolishing on film is to DEMOLISH A TOWN. Secondly, compositing is good if it prevents the on-set maiming or death of your big-time pop star lead.

2005: SHINOBI: HEART UNDER BLADE – digital effects used to portray the absolute otherworldly skills of the Iga and Koga elite. Ambitious as hell, this shinobified take on Romeo and Juliette allowed the 50’s ninja wizard model to be updated to the modern X-Men level. While the effects often stood out from the rest of the film’s visual quality, at least the digital was being used to render something otherwise impossible to portray in live action… for the most part. CG falcons and animated figures swinging on ropes around cliffs are awful, even with the A-picuture budget here.

The Lesson: USe CG to render the impossible, not the inconvenient. If you can’t get a real guy to swing on a real rope, write the scene out.

2008: SPEED RACER – big budget American remake of a low-budget Japanese cartoon, so yeah, why not throw in the most expensive yet ninja scene Hollywood ever produced. CG city, but no worse than the rest of this rendered visual debacle. The Wachowskis weren’t done with ninja yet though.

The Lesson: Ninja fights have been filmed practical since the silent era. You don’t need CG and seven-figure budgets to do it right.

2009: G.I. JOE: THE RISE OF COBRA – leaned heavily on Snake Eyes and Storm Shadow, and with a martial artist like Ray Park involved, yielded some nice results. Made up for the lame Iron Man-wannabe CG mech suit crap elsewhere in the film.

The Lesson: Ninja fights have been filmed practical since the silent era. You don’t need CG and seven-figure budgets to do it right. Again!

2009: NINJA – Again, real martial artists + digital *can* = good. Read my love letter to this homage to both the 80’s and 90’s here. Entirely more satisfying than the same year’s Ninja Assassin.

The Lesson: Start with a real martial artist and you’re well on your way to a decent final result.

2009: NINJA ASSASSIN – with an immensely bigger budget than Ninja, and Hollywood behind it, the only innovation here was the ‘slow-motion knife-on-a-chain’ thing. Korean pop star Rain fought 80’s shinobi-cinema legend Sho Kosugi with these lovingly slow-mo’d cartoonish digital weapons, while post-production CG shadows, flames, smoke, dust and light effects obscured what must have been a poorly covered principle shoot. A real head scratcher. Two real stars who clearly worked their asses off to prepare for their roles completely LOST in all that digital clutter…

The Lesson: Ninja fights have been filmed practical since the silent era. You don’t need CG and… ah you know the rest. 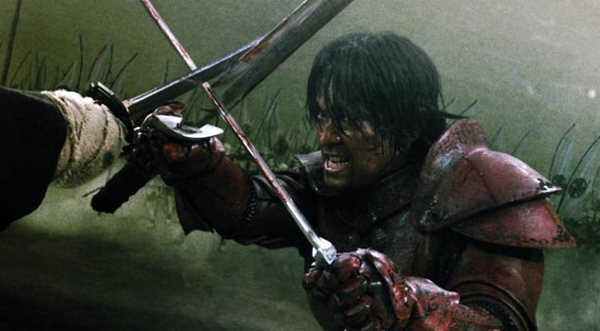 2010: GOEMON – took the legendary ninja bandit into new realms of CG glory. The hyper-detailed European-styled environs and costumes needed the digital help. A guy riding a horse through the woods? Not so much, but it was rendered anyway. Because, y’know, where are you going to find a horse, a rider and some woods for a period flick in Japan??? Goemon is like watching someone else play a video game, with a total green-screen look that despite all the technology at hand just ends up falling somewhere between what Kadokawa got with massive sets in Legend of the Eight Samurai in 1983 and Coppola achieved practical (and for peanuts) in his 1992 remake of Dracula. 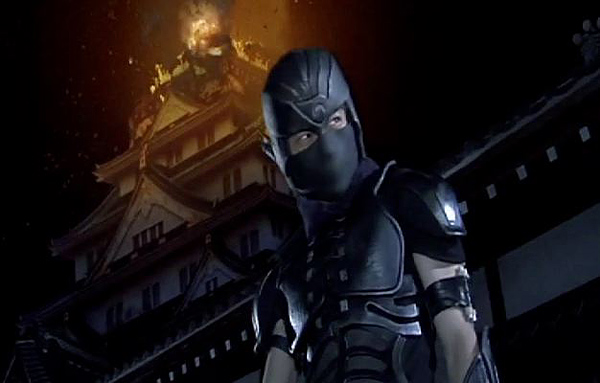 2010: ALIEN VS. NINJA – hokey digital enhanced the hokey rubber suits in this hokey action comedy. Wore its cheese on its sleeve, and the cheesy CG actually fit right in. Another VN love letter to cheap, dumb and fun here.

The Lesson: Ten years after Red Shadow, CG of similar animated acrobatics doesn’t look one bit better, but it is WAY cheaper, enabling a whole new category of exploitation filmmaking.

So after a decade of digital ninja, several things are crystal clear:

—  Rendered weapons can work, but in slow-mo scenes they look really fake.

—  Digital night lighting comes in real handy in the ninja genre. But digital blood is ASS.

—  Environments: either keep it all real, all CG, or mostly real with some CG tricks enhancing what’s already there. Flipping between real and totally rendered draws attention to the differences and ruins the immersive experience of the film. 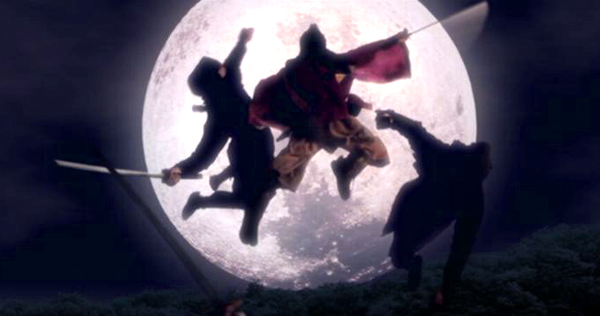 Alas, despite the obvious shortcomings, there is an increasing economic NEED for green-screen and digital post in all movies at all budgets. It’s being done to cut principal photography time more than anything else.

Popping blood ‘squibs’ on an actor requires a specialized effects crew, probably a fire marshall and paramedic on set, increased insurance, and the time to re-do a take if they don’t go off right. And all of that is in on a set run by union contractors charging by the minute already.

CG blood can be rendered by one guy with a laptop in half a day in some tiny post-house cubicle. Are the results as good? No. But does this make you film viable in this failing economy, where it otherwise wouldn’t get made at all? Yes.

So good, bad or ugly, digital shuriken, CG blood and rendered period locales are here to stay. (and for that matter so are digital zombies, CG race cars, rendered helicopters in war films, so on and so on…)

What I’m waiting for is the film that makes the big step – has digital that doesn’t distract, and enough confidence in its story and actors to not hide them beneath CG trickery.

Is Kamui Gaiden that film? That’s for next time…