Martial arts are a lot like religion – you can’t have a discussion, it’s an argument. You can’t have an opinion, you take sides. And just like religions draw lines in the sand over buildings, relics and figures, so too has the ninjutsu community focused considerable scrutiny toward the alleged ‘ninja sword.’

Conflicting ‘evidence’ abounds – museums displays here, pictures in karate mags there, eyewitnesses, experts and amateurs all weighing in (*I* fall in there somewhere, ahem…), and too often folks deliver their opinions in over-confident, absolute terms.

And it is those broad, matter-of-fact statements that really escalate the tone and language of these debates. You don’t have to look far, however, to see how contradictory ‘reliable information’ can actually be:

The professionals are just as conflicted, no more evident than in the internet jousting between martial artists/authors/historians that starts with this article by Bujinkan instructor Don Roley on the BudoSeek info board, here:

Mr. Roley’s thesis in short: The stereotypical straight sword is myth, it wasn’t part of the 60’s movement in Japan, Masaaki Hatsumi never used one and shouldn’t be blamed for its proliferation. Rather, Stephen K. Hayes is largely responsible for the erroneous notion that this is the signature and exclusive blade of ninjutsu.

Hayes’ points: Such swords existed, but weren’t a “badge of official ninja-ness.” He admits his written works over the 80s both embraced the stereotype and guarded against it, to the point that the debate is often “silly” and folks should get on with it already.

Then, sitting somewhere between the two is historian/author Antony Cummins:

Cummins originally comes from the doubters camp ala Roley, but comes to defend Hayes as not being the source of the debatable blade. He points to illustrated reference in antiquity to straight-bladed, square guarded swords used by Ashigaru foot soldiers – so such blades may have existed – but emphasizes the lack of evidence relating directly to anything ninja.

For fairness sake, here’s some counter-vids as well, I find this one both amusing and informative, simply for the additional pictures:

Cummins might be a little too eager to state the absolute certainty of his ‘evidence’ (something a historian should be especially weary of), but I really like is his overall summation that “There was no such thing as a specifically generated ninja sword, there were swords ninja used.” Same way there is no official gun of the bank robber. Well said!

And this is probably the healthiest attitude to have on the subject. Martial arts are part history and part faith in oral traditions where that hard data gaps. At the same time, lore and pop media notions come from some nugget of truth somewhere.

To blanket state that the sword is myth is as irresponsible as saying it is absolute fact. 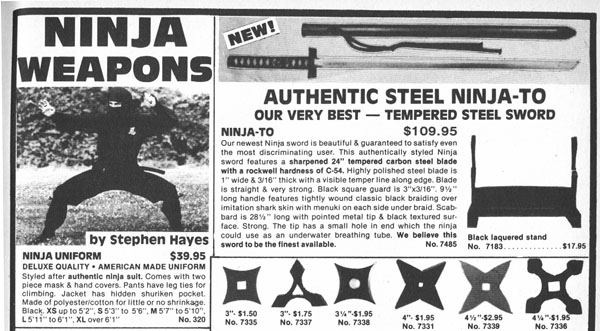 So where does Vintage Ninja stand on all this? Think Switzerland. We ain’t got a dawg in this fight…

Tim has trained with both straight and curved blades, and can defend either’s merits. I, being the Japanese media nerd above all else, prefer the curved blades most often seen in their film, TV and comics (posts on these will follow shortly).

Neither of us like to see blanket definitive statements insisting there was or wasn’t one signature ninja sword.

Tim puts it very well, and I’ll paraphrase: If a law enforcement historian made the claim “All American police in the 20th Century wore blue uniforms and carried .38 caliber service revolvers” would it be true? Some did. A lot did. A lot wore brown or green and carried .45 automatics, too. So while there is truth there, its not the only truth, and stating it so authoritatively makes the statement wrong in general.

So if you’re a martial artist taking sides in the debate, lighten up. Martial arts evolve. The fact that these arts are no longer in-use battlefield practices means they’ve been abstracted from their native form already. Evolution of an art to fit new times is just as important as maintaining its traditions. And wasn’t ninjutsu the most adaptable and organic of all martial practices to start with?

If you want to train with a short, straight blade with a square guard, knock yourself out. Sure, it’s a standard of the mail order business, but it had to have come from somewhere to begin with, right? On the other hand, if you want to make a ninja movie where those blades aren’t used in favor of some other screen aesthetic, go nuts too!

There’s really no need to declare your fealty to one school of thought or the other. And anyone asking you to needs to think for a minute about the debate at large. If there’s this much conflicting thought, and this much contradictory ‘evidence,’ maybe there is no absolute truth to be had.

Next time: Ninja swords in manga, followed by the differences in movie props between Japan and the U.S.