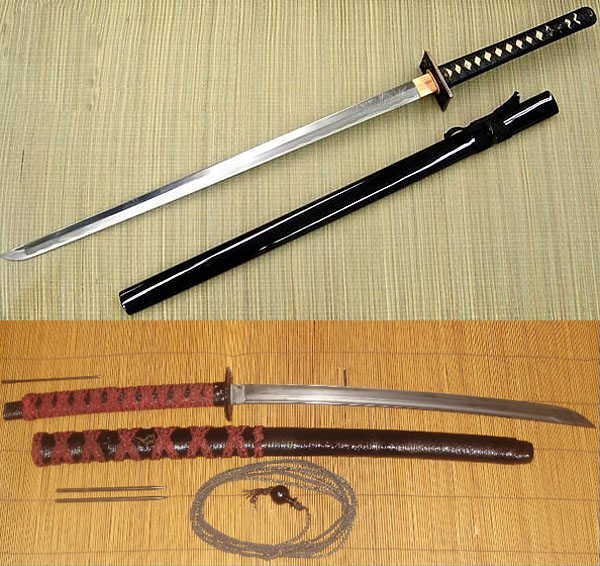 The question of the ‘Ninja-To’…. Did it exist or not? Is it tradition, lore, or Hollywood?

Healthcare in the U.S. and the Kennedy assassination have been debated less.

I didn’t fully realize how much of a sticking point in the martial arts world this sword actually is, but in the past few weeks of on-and-off research, I’ve found thousands of words dedicated to either debunking or defending what I always thought was more of a merchandisers concoction than anything else. Maybe not the case.

There are students training in the fabled straight sword, then there are others embracing curved versions with less ‘regulation’ accoutrements, and both camps can cite historical illustrations, manga and movies to support their claims one way or the other.

But is one any more legit than the other? Both are modern products of lore and tragically incomplete historical records. You can buy both the maligned ‘Hollywood’ sword and the less stereotypical curved alternatives from online vendors. Both show up in popular media. Hmmm…

Debates over the ‘Ninja-To’ are a gateway, a slippery slope, to more profound discussions that question the very legitimacy of varying styles of ninjutsu practice and instruction.

The iconic sword is a major cog in the visual shorthand of our idea of ninja. It is a symbol, and the curvature, or lack thereof, of the symbol you embrace is somewhat of a declaration of belief.

This concept of visual shorthand is going to be important in the next few posts, so I wanted to take a minute to explain our use of the phrase.

Say you’re a cartoonist – draw me a quick ninja. What do you scribble out? Crouched figure, black suit and hood, throwing star, straight sword with square guard. Done. Ninja.

Now you’re directing a movie, and you need a ninja to jump out and surprise some samurai guards. Instructions to costumer: black suit and hood, throwing star, straight sword with square guard.

Same holds true for stage directors, video game designers, book cover painters etc. and so forth. You achieve instant ninja-ness with a combination of key elements people are familiar with, the visual vocabulary that tells them NINJA at a glance.

And the sword is important because it is a NINJA SWORD® and not a samurai sword. Samurai swords are for noblemen and armored elite, not our crafty, downtrodden but resilient fox-like commandos, right?

Visual shorthand is no less prevalent in martial arts practice. Karate has its gi and belts, judo’s are different, tae kwon do and kung-fu as well. And since the 60s in Japan and the 80s in the rest of the globe, organized ninjutsu study has embraced black uniforms, tabi boots and yes, sometimes, the straight sword with square guard.

So when someone questions the notion of the very historical existence of the iconic blade, it is easily perceived as an attack on the integrity of a student, a school, an instructor, an entire style and ultimately the sacred scrolls and family traditions it is allegedly based upon.

And as we’ll see next post, that fight is ALL OVER cyberspace.

The swords at the top of the page are the Masahiro Dragon Nin-To Samurai Sword from Japanese Samurai Swords.net, and Lee Flynn’s awesomely Kamui-esque custom Shinobi-Gatana from Dragon Hoshi Defense.