I really love The Octagon. I loved it as a stupid kid in black pajamas back in the day and I love it now. It is an unsung hero of the 80’s American genre, the biggest non-Kosugi entry into the field. It has one foot in 70’s intrigue cinema, like a Killer Elite that made good. At the same time, it is really the first of the 80’s martial exploitation flicks, with an over-the-top body count, one-liners galore and a fetish for Japanese costuming.

But as much as one loves this movie, another can dismiss it for fundamental structural problems and a bloated script with too many characters, generally turning the thing into an editorial train wreck. You see a lot of reviews of The Octagon that write-off most of the film as an incoherent jumble of notions sacrificed for an explosive high-kicking ending. They’re not wrong.

But as a genre enthusiast you make your choices, and I think a lot of us choose to forgive the tangled roots that under-nourish the strange fruit that is the final act of The Octagon. The fights at the end are just that great.

So here’s eight things I love and hate about The Octagon:

1.) I LOVE… that the marketing campaign didn’t ‘hero’ Chuck! It was all about the main heavy Kyo, the iconic masked ninja. If a single image ushered in the American ninja craze, this was it. Norris had some clout at that point too, Good Guys Wear Black and A Force of One propelled him form martial arts celebrity to budding film star and he was on his way. But the marketing team had ahold of something else this time out – THE NINJA – as pop 80’s as breakdancing and Billy Idol gloves, and they ran with it. 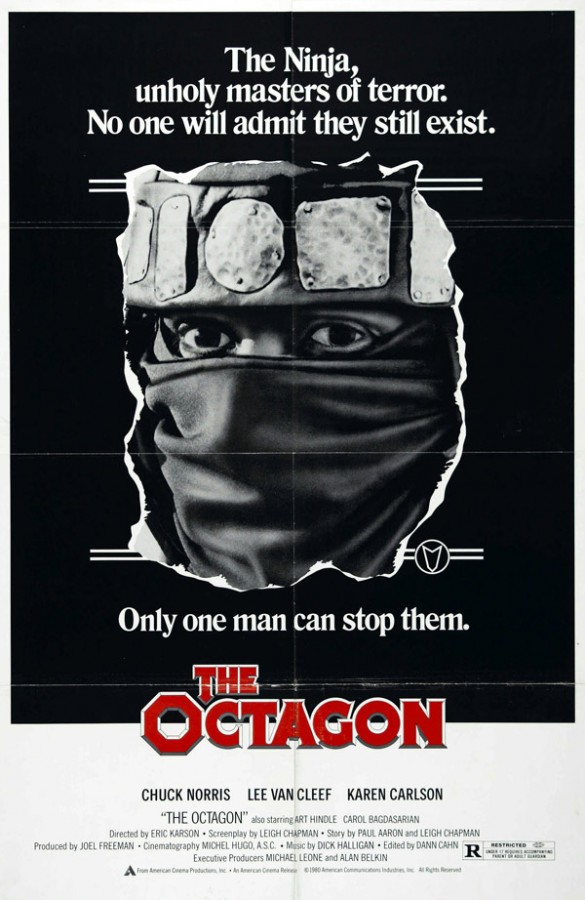 (Thanks to Wrong Side of the Art)

2.) BUT I HATE… that those same ninja often look like imbeciles. What are supposed to be the terrorists’ terrorists end up looking like sword-weilding cultists too stupid to use guns. Arch villain Seikura and his muscle Kyo are basically the only real threat to the hero, who merely has to survive wave after wave of what amounts to kamikaze attacks in order to get to a real fight. I think the flick needed less, but more deadly, costumed ninja.

3.) I LOVE… Richard fucking Norton. Norris may have been the star, but for my buck Norton was the MVP.

As “Longlegs,” one of the more vocal thugs in the mercenary machine, he takes a pretty phenomenal beating from Chuck, including a brutal cowboy boot heel to the nuts. In a doco on the DVD, Norton recounts his security client John Belushi coached him on how to sell the blow while the two were on the set for The Blues Brothers. It is priceless.

But it is Kyo the Enforcer who absolutely rules! Norton, in Barbara Burgdorf‘s superbly designed costume, has 100% intimidation factor. He did all the exotic weapons bits himself, innovated that awesome hissing sound on his own and took all sorts of stiff shots from Norris, including the famous jump kick through the flaming wall. No wires, no digital.

And doubling as non-descript ninja jobbers, he died a total of eight times on screen. Now that’s a hell of a work ethic! 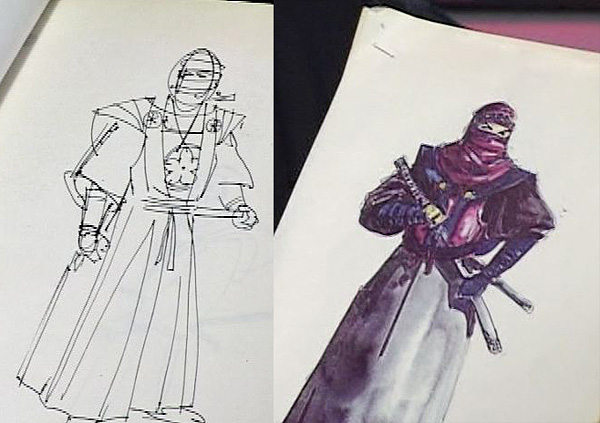 4.) I HATE… how the actual Octagon itself never really pays off. You don’t even get a good look at the thing until near the end. It isn’t shot in such a way that the eight sides each hold a different threat or anything (like Bruce Lee’s Tower of Death). If you name a movie after a structure (Shaw’s House of Traps for example), then the architecture has to be one of the film’s stars. Maybe each side should have housed a different obstacle gimmick, or eight different ‘boss’ fighters to take down one by one. Instead we sort of get half an obstacle course / half maze populated by cannon fodder. Feh…

5.) I LOVE… that Norris and ilk learned a lesson from his and Bruce Lee’s work in Return of the Dragon. You book a main event match at the end of the movie, and make it amazing enough the audience forgives the rest of the film if need be. The duel between Chuck and Kyo at the end of The Octagon is a clinic in old-school martial arts filmmaking. Director Eric Karson shot it like a dance number – wide two-shots so you see full bodies, holding on long takes with moves exchanged on cascading sequences. These people shooting choppy, jitter-cam, strobe-cut “fight” scenes today could learn some serious lessons here.

6.) BUT I HATE… the final-final fight, which most people forget even happened. Seikura has been set up as beyond deadly, essentially in one brief scene of Tadashi Yamashita‘s signature double kama routine, which is sooooooo bad ass and terrifying you think the hero has no chance.

So Norris finally catches up to him, and their final fight is the biggest DUD ever. I’m not convinced Norris was even in the final shot. What happened? Did they lose a reel at the lab? Maybe they tanked the whole shoot, or ran out of money and improvised in the editing room? Who knows, but damn the movie ends with a whimper.

7.) I LOVE… the Dick Halligan score. One of the best 80’s action scores ever – experimental, innovative, influential. It really looked forward instead of relying on a bunch of Lalo Schifrin-knock-off  70’s conventions. Halligan also avoided the cheesy Asian stings and uber-dramatic gongs so relied upon elsewhere, and for that he deserves a medal.

8.) BUT I HATE… that this score isn’t commercially available. And while we’re at it, why the fuck is the DVD a shitty full-frame transfer? And where’s all the cut scenes and outtakes? The Trinity DVD release has the most boring ‘making of’ docos ever, with more time spent on finances and deals and hirings than on actors and martial arts choreographers and stuff you’re dying to see.

The 80’s ninja craze is woefully under-represented on DVD, so here’s to the hope for definitive Blu-Rays and extras-rich downloads in the future.

Man could this list go on and on and on. I love that the weaponry isn’t mail-order catalog crap (no straight swords!), I love Carol Bagdasarian‘s femme-merc character (and side boob!), I love the cameos from Tracey Walter and Ernie Hudson and Brian Tochi of Revenge of the Nerds fame. I love that a Mexican wrestler stole the name!

Then I hate those fucking wizard cloaks several ninja wear, and the fact that this big karate tournament is going on the whole time OFF-SCREEN. Why write that into the script if you’re never going to show any of it? And man did Lee Van Cleef need more screen time!

But like I stated earlier, genre enthusiasts ride the crests of the highs, and forgive the lows. The fights in The Octagon are fantastic from start to (almost) finish. The cast is great. The notion of ninja selling their darkest secrets to modern-day mercs and terrorists is genius, as is them policing their own when those secrets are threatened. Norris as reluctant hero works, and although the convoluted script takes too much time and effort to push him over the edge, when he does go, the movie picks up steam like no other.