The advent of the 80s ninja craze saw all sorts of established martial artists from the 1970s transition from various arts to the explosively profitable and high profile modern ninjutsu of both dojo and screen — Sho Kosugi and Mike Stone most notably, Tadashi Yamashita was a natural ninja convert, too. But no one was there earlier and lasted longer as a shinobi-compatible martial-chameleon than the absolutely iconic Gerald Okamura.

I first met Gerald Okamura, alongside the equally iconic Al Leong and James Hong, at of all things a horror movie convention in Burbank, California — the Big Trouble in Little China rub. All I wanted to do was talk about The Octagon and that Lite Beer commercial he did with Joe Piscopo but I held off knowing it’d be a richer exchange via email interview, and when Covid locked us all down I was able to knock such an interview off my secret scroll of unfinished ‘someday’ projects.

As posterity has elevated Big Trouble in Little China (the martial arts project John Carpenter poured his heart into after the development hell of Eric Van Lustbader’s The Ninja fell through) to new heights of fandom, Okamura’s golden-pistol-weilding Wing-Kong goon has made him recognizable to entirely new generations of film fans. A modern sofubi figure he sells himself has been my desk-side taskmaster for years. This, however, is likely the only interview he’s done wherein that film is never mentioned.

Instead, we talked ninja…

VN: You were born in Hawaii, did you grow up there too, and if so, were you exposed to Japanese movies and TV? Do you have any early recollections of ninja in books or comics?

GO: Yes! I was born in Hawaii (November 1940), born & raised in Hilo. Went to lots of Japanese movies (Samurai movies like Zatoichi). I played sports (baseball) before I started training in the martial arts. Started JUDO around 12-13 years old. 1958 Hilo High School grad. Left the Island right after graduation to join the Army (3 years). I never thought about the difference between samurai & ninja movies. It was more entertainment for me. Judo was the most popular martial art (but It was more like a sport for me). We had Kendo & Aikido too. It was around 1958 when I first heard the word “KARATE.” 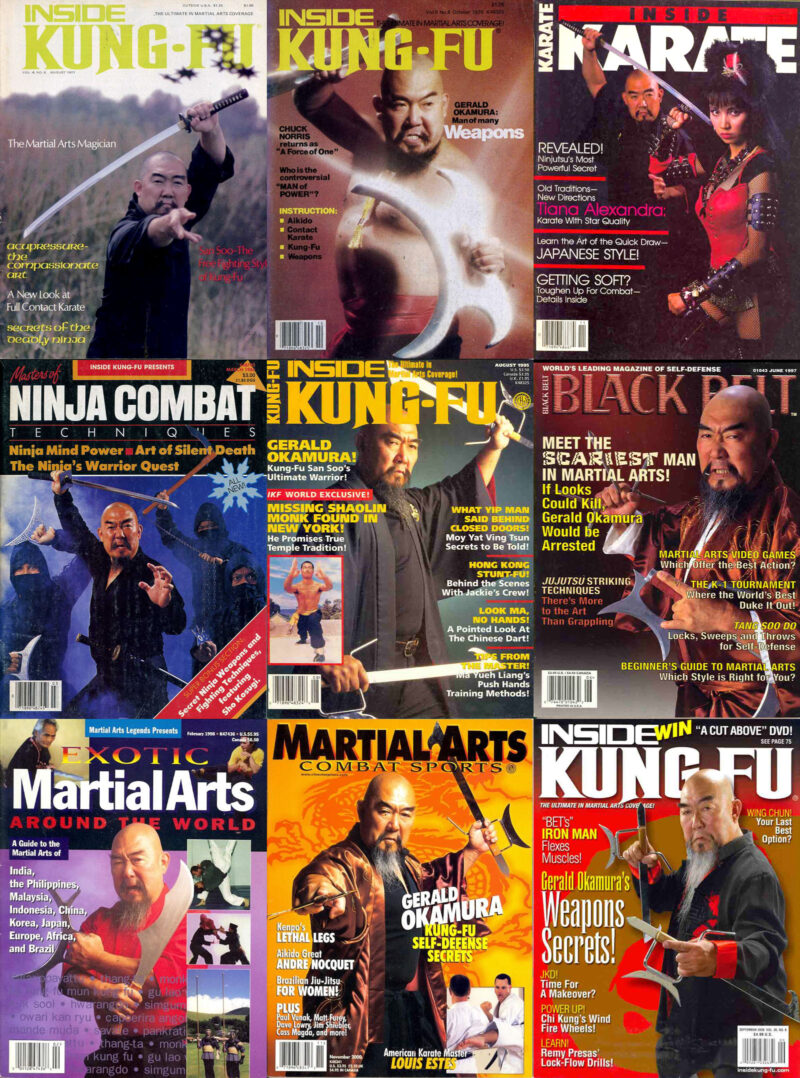 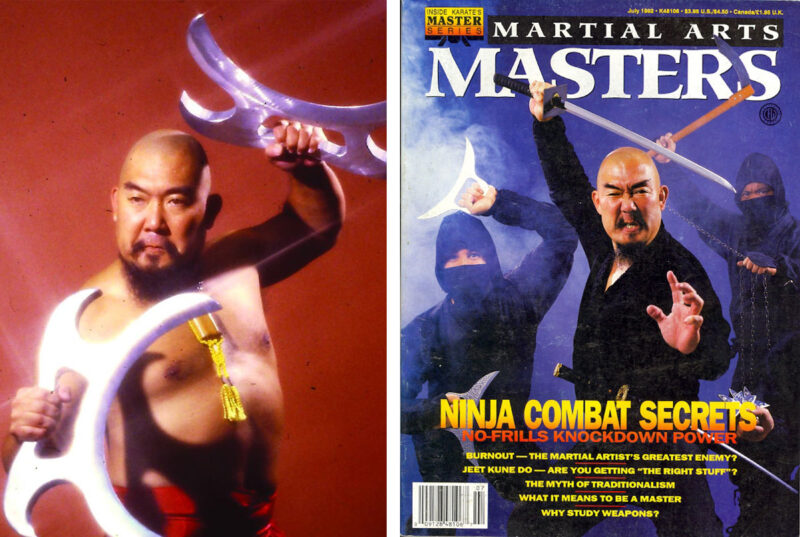 VN: In the mid 1970s you were on many iconic Kung-Fu magazine covers, but by 1980 those were starting to turn into ninja covers more and more. Did you notice the demand changing from publishers? Was there a single moment you realized the 1980s ninja craze was upon us?

GO: It goes with what will sell the best magazine at that time in my opinion. The [focus] for me around that time was more into getting the job. I didn’t think or feel that a change was happening. For me all martial arts are an interest…

VN: Can you tell us about your philosophy as a weapons and movie prop designer? When asked to do a movie prop or provide weaponry on a set, do you strive for historical accuracy or is a flashy, impressive prop more important?

GO: Wow! I feel most of the time they kinda crossover each other. Movie props are easier cause they just have to look BIG on the screen. But I start with the idea from martial arts weapons. Let’s just start with a blowgun — when I did The Killer Elite movie, the scene at the airport called for our group to attack Mako and his group coming off the airplane. Not knowing how the scene was to play out, my thoughts were ‘airport & concealed weapons’ so I made me a short blowgun concealed in an armcast, but we didn’t use it in the movie because they said the dart wasn’t “BIG” enough for the screen. You don’t see any nunchaku in the movie cause they wanted to hold a PG rating.

So I guess the best answer I can give you would be “BIG & FLASHY” for the screen.

VN: Five years before the ninja boom in the US, you were part of the ninja battle in Sam Peckinpah’s The Killer Elite. Was that you fighting James Caan on deck? What are some memories of that shoot?

GO: For me it all started when someone asked to borrow my weapons for an interview for a movie called The Killer Elite. I told him ‘I go with the weapons’ and thats how I got to the interview. Also, got the part (this is the project I got my SAG card). This was my second gig but my first movie. Didn’t know what to expect. Met martial artists that I only read about in magazines or saw in movies or TV.

No, I didn’t fight James Caan on the deck, but I had a sort of fight scene with Burt Young. Other memories… I took a footlocker filled with weapons on this trip to San Francisco but [they] never used anything. First time meeting Tiana Alexandra-Silliphant [wife of the film’s co-screenwriter Stirling Silliphant]. 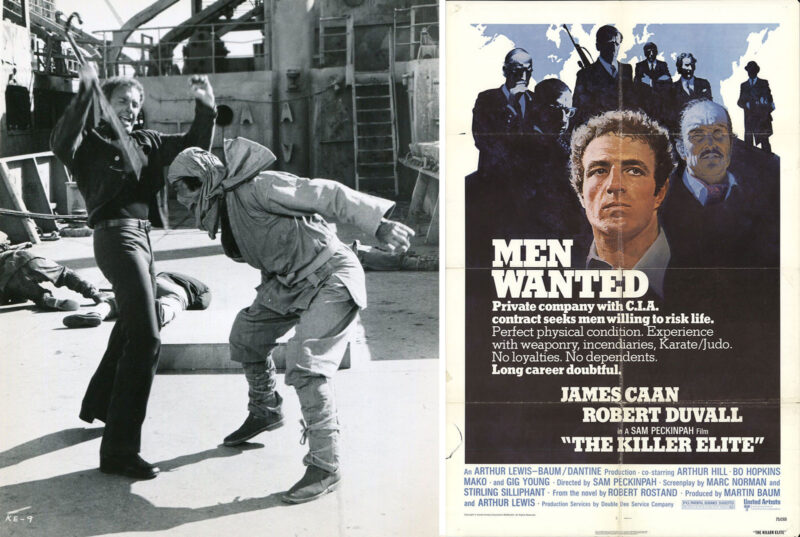 VN: The duel between Mako and Tak Kubota in that film was only the third time an American studio had filmed a ninja scene, and the first for the big screen. Was it hard at that point, before the big 80s boom, to get costumes and weapons? Were they on their own to produce such props and costuming back before the gear was commonly available in retail?

GO: We had more gun battles than sword fights, so ninja weapons weren’t the top priority. I don’t [consider] the duel between Mako and Tak Kubota to be a ninja fight scene.  I think the whole movie project was way too early before its time, and trying to hold Sam Peckinpah movie to a PG rating is wrong. This movie of 1976 would be a hard sell in 2020, the new audience has a different mindset. But for me, it’s [still] entertaining.

VN: Years later, you had a great part in The Octagon, which was ahead of its time considering the ninja craze that was about to hit.

GO: 4-5 years after The Killer Elite movie, I saw lots of changes in the movie industry and its ratings. The Octagon would be [considered] a “ninja movie” in those early days, more than The Killer Elite. I filmed at the Indian Dunes location for about two weeks. It was the first time I met Richard Norton.

VN: You’ve done some deadly serious martial arts scenes on TV and film, and then some very silly parody and comedy films. What’s more fun or rewarding to do?

GO: I started out in the TV & movie business kinda late — 1975 on Kung Fu. The next year, I did The Killer Elite movie. Started out playing bad guys (lots of fighting & lots of “B” movies).  For me, I had fun in all projects and all were rewarding in different ways. When I first started out, any job was okay and it was an awesome way to meet the big stars. In fact, throughout  a whole ‘run’ I always look forward to meeting new people and stars. The Ninja Academy movie — lots of friends (stunts & background) were in this movie project along with great cast and crew. I had lots of different character parts in TV & movies & they were all fun parts. You would think that Big Trouble in Little China would be [my favorite] and its right up there. But lots of my “B” movie projects were lots of fun and rewarding. 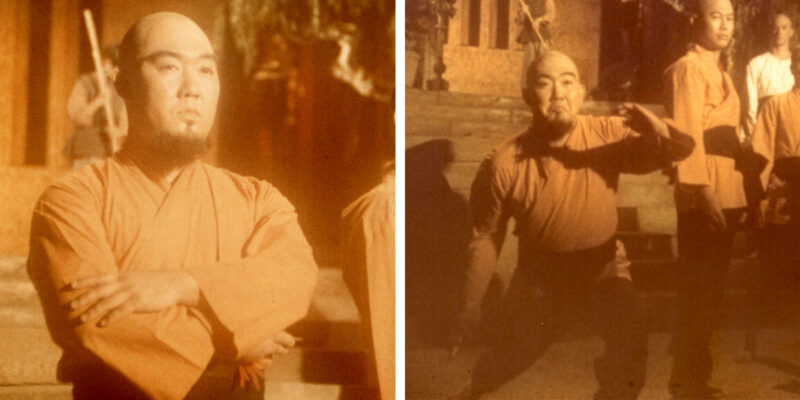 VN: There’s a few behind-the-scenes photos of this incredible line-up of talent in Joe Piscopo’s beer commercial from 1987. Who was there with you? Did you guys bring your own costumes and weapons? It looks like Tadashi Yamashita is wearing his American Ninja outfit.

GO: Joe Piscopo’s commercial had James Lew, Al Leong, Doug Wong, Bill Ryusaki, Jeff Imada and Tadashi Yamashita. The production [provided] our wardrobe (not sure about wardrobe for Tadashi). This was the single longest shoot for me on anything I worked on ever, they didn’t want to go to second day. We all seven guys had something different to do with Joe Piscopo but not all of it got put in the commercial (thats called  “ending up on the cutting floor). I was one of the guys coming down the rope at the very start but my “gig” with Joe didn’t make the final cut. I went home in lots of pain for coming down the rope many many times. The commercial didn’t run long, but at first it was suppose be big time. At first, it was OK  for Joe Piscopo to play Bruce Lee, but then things changed real fast — a group of people didn’t want that to happen. Thats show business.

VN: Apart from the films you’ve been in of course, do you have favorite kung-fu or ninja movies? We’re always curious what martial arts and film industry folks themselves enjoy…

GO: I like Samurai movies like Zatoichi or Lone Wolf & Cub to name a few. Not a big fan on HK movies. I’m a big fan of Western movies.

VN: “The scariest man in martial arts” was one of your famous taglines on a magazine cover, but we’ve met at a convention or two, and everyone else I know who’s met you says you’re the sweetest guy ever. The big question is… are you still available for romantic leading roles in a major Hollywood picture???

GO: And now for the BIGGEST question in this interview: YES, I’m available and waiting next to the telephone for that call from any casting director that would offer me a “LEADING MAN ROMANTIC ROLE.”  I heard it some where that “The Scariest Man in Martial Arts” makes the awesome best romantic lead in any movie project.

Mr. Okamura signs off with a simple “Stay safe. Stay well.” intended as much for you all as it was for me. Here’s an instantly recognizable presence from a dizzying array of martial arts-related projects, a man there for the first ninja fights shot for American cinema, as well as the comedy-fare that signaled the end of the core ninja-exploitation boom. He was a brutal master in The Octagon, and again in GI Joe: The Rise of Cobra 30-odd years later. In 2020 he’s as social media savvy a figure as you’ll find and is eminently approachable and friendly.

AND I suppose I should service his most iconic role after all:

Gerald Okamura: The Man of Many Weapons official website. Don’t miss the loaded merch store and his social media links.

Burbank, California’s Martial Arts History Museum, where Mr. Okamura is a Hall of Famer, is responsible for a highly recommendable biography video.

The Max Toy Company is responsible for his superb vinyl figures, with more color variants coming in the future. 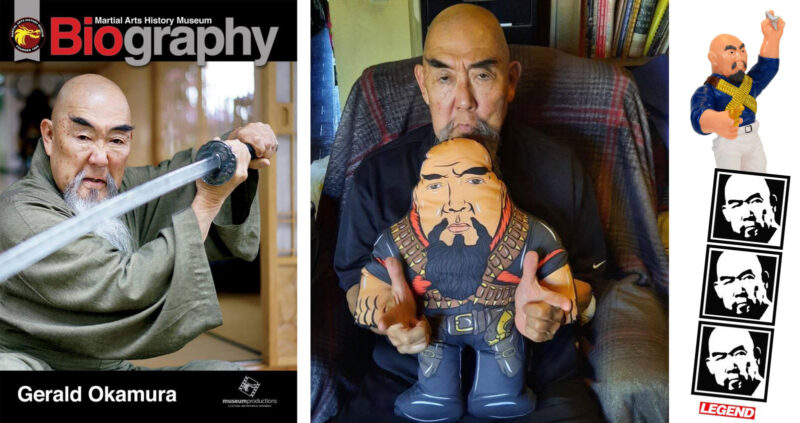