If there’s one speck of light in the dark months of the pandemic shutdown, it’s been some great quarantine reading for fans of Cannon Films, and that continues with Austin Trunick‘s The Cannon Film Guide Volume 1: 1980—1984.

After an intro by director Sam Firstenberg, the history of Cannon is broken down film-by-film in order of release date, with each chapter focusing on one movie (or series when there are direct sequels). The guide thus paints a detailed portrait of an upstart maverick company breaking all the rules and finding its genre exploitation legs. Amidst a catalog diversity that bounced from comedic soft porn, pistol-driven urban revenge, ‘Nam-sploitation and surreal musicals, modern ninja movies became reliable bank right away and we are given some proper context of how important these films became in Cannon’s ascension as a powerhouse. So between Enter, Revenge and Domination‘s chapters, we also get the likes of The Happy Hooker Goes to Hollywood, Last American Virgin and Lady Chatterly’s Lover, Death Wish III and 10 to Midnight, the Lou Ferigno Hercules flicks and Sword of the Valiant, the Breakin‘s, the Missing in Actions, and many more. There never was just one of anything, was there? Well, except for The Apple. There’s… only one… The Apple… 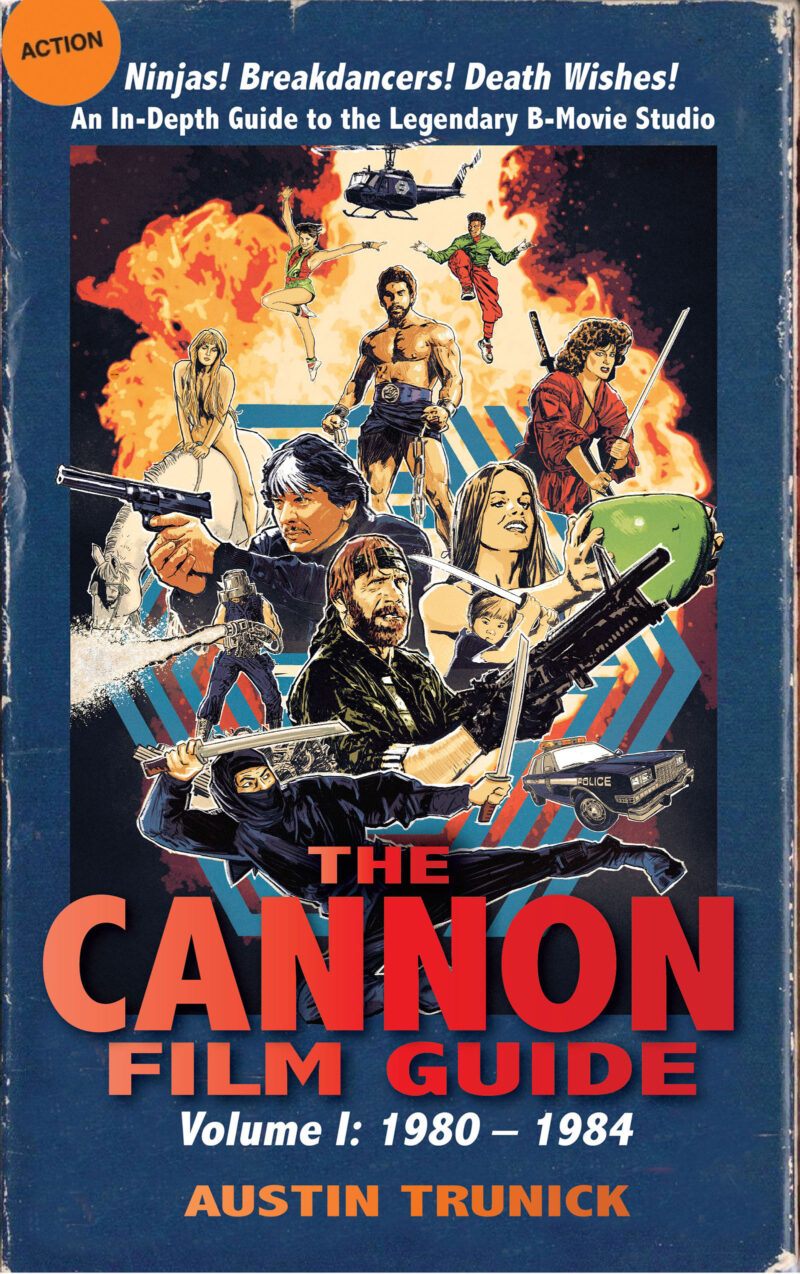 Trunick has a casual, inviting and nurturing writing style, with a proper over-enthusiasm at times, appropriate to much of the over-the-top fare Cannon generated. It makes for an informative but still fast and fun read. In somewhat of a throwback to film crit/analysis books of the bygone era before home video of any sort existed, the text is largely centered on summaries of the films. I was thrown a bit by this at first — I mean, who here needs an actual blow-by-blow summary of Enter the Ninja? — but then thought about how many other Cannon films are still genuinely obscure, have rights issues that kept them off physical media post-VHS and have currently fallen through the cracks of our increasingly fragmented streaming world, and yeah, there’s some legit value in these summaries. This is particularly true for newbies, and to me, that’s our most important audience right there.

But there are certainly gems for us more-in-the-know old farts too. Trivia bits like grizzled Virgil “Lt. Dime” Frye in Revenge of the Ninja is the father of Punky Brewster herself, Soliel Moon Frye? Side-bar interviews cap off several chapters as well, with the likes of Sam Firstenberg, Steven Lambert, Ninja III: The Domination‘s Jordan Bennet and Kane Kosugi — who relates a memory of being conscripted into retail duties in his dad’s dojo every Halloween when they’d be inundated by folks looking for ninja costumes. This was a thing?!?! You could just pop into a Sho Kosugi dojo in the 80s and buy your Halloween costume from him himself are you f’n kidding me!!!

Don’t necessarily look for deep dives into the developmental, production or release histories of some of the films (there are other sources for that), the main thrust of the book is celebrating the content of each movie. The films are consistently presented in a positive, uplifting manner — all too rare in our overly-snarky and entitled elitist spheres of retro-media fandom. The energy and direction of this book is to get the reader in front of a screen, a simple mission too many others loose sight of. This is a book by a lover of Cannon films trying to convert the reader into doing the same, and I hope he succeeds!

I’m also very much appreciative of the 6×9″ trade paperback format and lightweight paper, making this 500+ page tome easy to manage and not a potential sternum-breaker or shelf-sagger like the other two Cannon monoliths published this year. This format also accommodates a VHS rental big-box style cover, appropriate for the subject for sure.

High recommendation here, and I’m looking forward to two more volumes of this…

Get it direct from publisher BearManor Media here and support an indie press in these trying times!