When I went through the 80’s ninja craze, I did some embarrassing stuff. I’d dress in improvised night gear and sneak around the neighborhood, cut myself aplenty fashioning weapons out of household hardware implements, I’d vehemently argue the scientific validity of the “Only a Ninja Can Stop a Ninja” law with people smarter than me, blow off having a social life or chasing girls to watch Spanish-dubbed eps of Lone Wolf and Cub Saturday nights on Univision…

But through the worst of it, I at least knew ONE GUY had my back — my con-conspirator in all things ninja FOR LIFE — Tim March!

Today is his birthday, so in lieu of being a real friend and sending a gift, I’m going to shame him with old pics and make you all endure some misty-eyed nostalgia.

That’s TM on the right with the fingerless glove. I had one too, but on this particular day I evidently opted for the inch-wide leather tie with Japanese graphics. Just wanted to prove what decade we’re talking about here.

For us, every weekend meant some type of martial arts geekery, be it choreographing our own fight scenes from diagrams drawn on pizza boxes and Latin notebooks or running through the woods with sharp-pointees like idiots. In the winter months, we could have been manning-up and training barefoot in the snow like hardcore Japanese budo masters, but, it was COLD… so we’d watch movie after movie after movie. 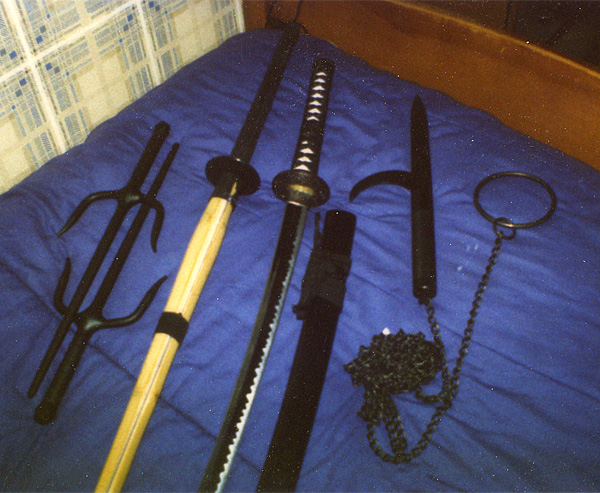 If every weekend held some sort of martial mayhem, every Christmas and birthday meant martial LOOT! I think this was my haul for Christmas of 82 or 83 maybe, all from an Asian World of Martial Arts catalog no doubt. We refurbished a bunch of this stuff twenty years later for a photo shoot, and some of it hangs on my office walls today. 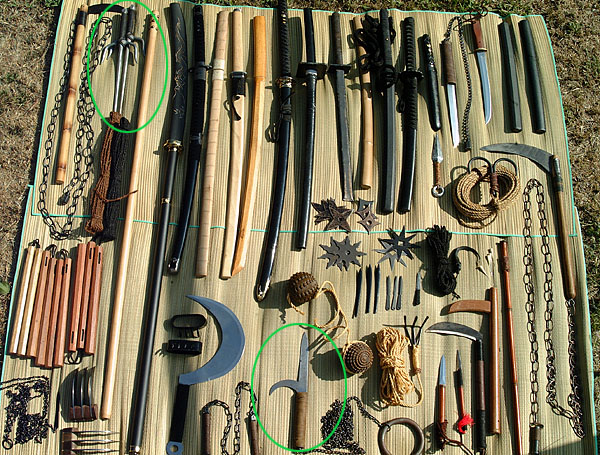 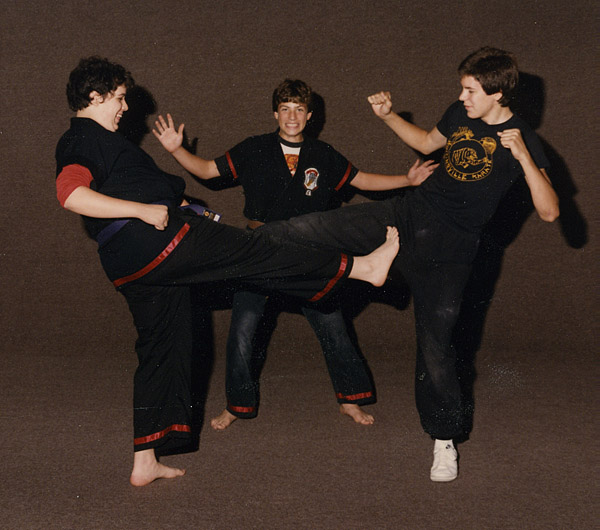 Eighth-grade or so, we both started studying American Kempo out of the cruddy basement of the cruddy gym in the cruddy downtown of the cruddy central Massachusetts mill town we were trapped in. Even at purple belt I knew how to pick my targets. 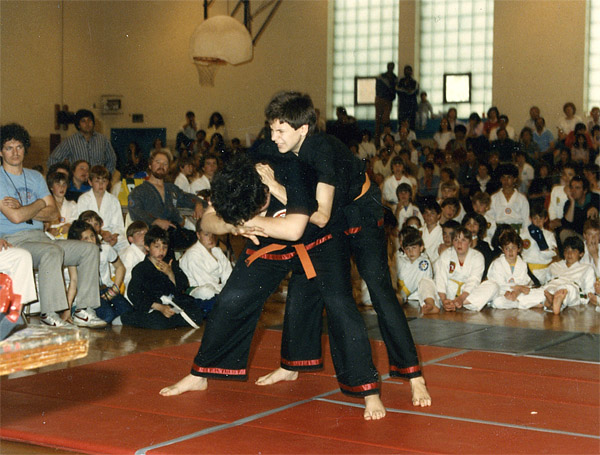 In April of 85 we entered a tournament and did this totally kick-ass fighting demo. Here, Tim is unwise enough to throw a full-nelson on me, which was NOT going to work for two reasons: 1) you can’t hold a big lard ass in a full-nelson, and 2) you don’t put a grappling move on a total pro wrestling mark, ‘cuz if you do… 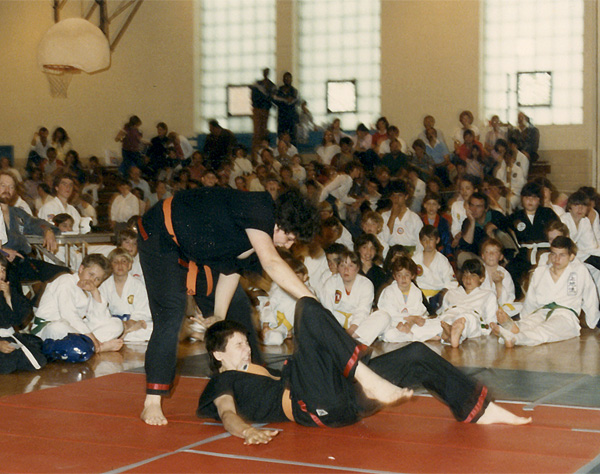 …you get annihilated by a fireman’s carry take over! Tim HATES this picture, but alas, I’M the one with the admin rights on this site, so suffer bitch!

We won MAJOR AWARDS and the adoration of the other children for this performance, see! 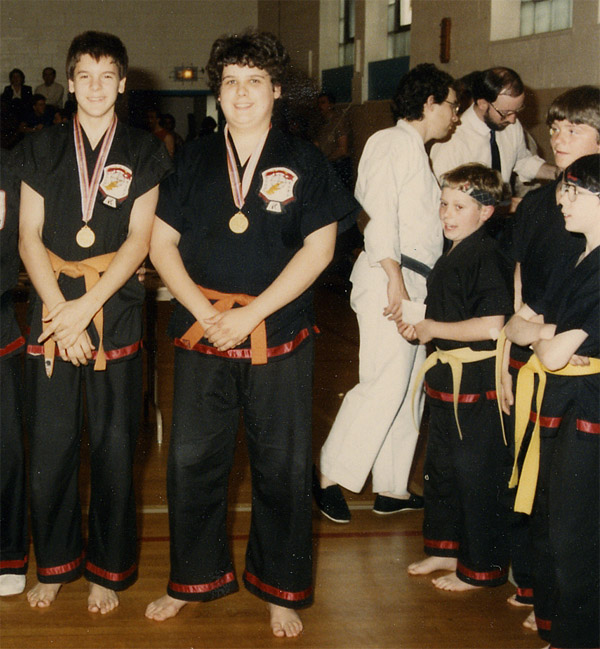 I still have that medal – from the Korean Hapkido Association – hanging next to my 1976 GI Joe Adventure Team medallion (cuz I’m a big dork) and a Special Olympics runner’s up medal I bought at a yard sale (cuz I’m kind of a sick bastard, and hey, there were NO losers that day). 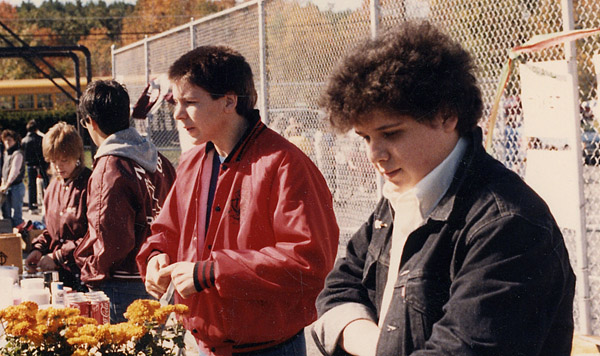 Tim in his dojo jacket, which we both sported for a while, rebuffing our high school’s colors. I got in hot water with our sifu once when my jacket smelled of perfume. I had lent it to a shivering upper-classmen hottie with huge freckled boobs earlier that day in class. Fealty to the dojo’s code was one thing, but to a teenager, huge freckled cleavage bred a whole different level of dedication.

Before we both started growing our hair out, Tim rocked a pretty awesome widow’s peak. Seriously, rivaled John Phillip Law’s in Danger: Diabolik. At the time, though, I gave him endless shit for it and called him Eddie Munster. Man… thinking about it, I was probably a pretty tough guy to want to stay friends with…

Anyway, now, I’m bald and Tim’s got a pretty awesome technicolor dreadlocked mane, so who got the last laugh! Check him out, eating fire and walking on glass in the burgeoning performing arts scene of Greenville, SC. 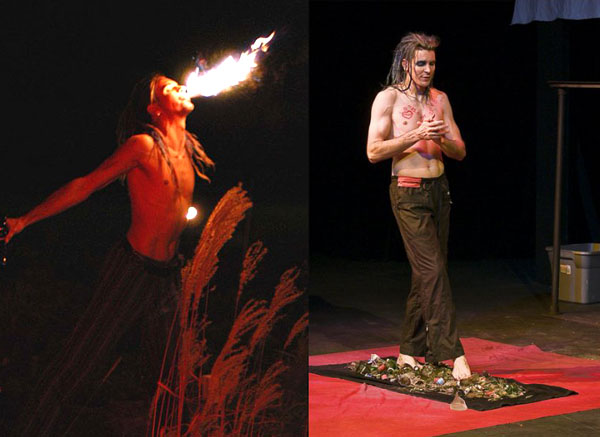 Alright, I’m sure we’re losing readers left and right here, so I’ll wrap this up by once again wishing a happy birthday to the man who first taught me that being a total nerd for something is OK, because somewhere out there, someone else is another nerd just like you. Despite our current 3,000 mile separation and the weird different directions our lives have taken us, I consider no one more of a trusted confidant and beloved friend.