While Hasbro’s “Storm Shadow” from the GI Joe line is easily the most prolific ninja toy produced during the 80’s craze (permutations are still best-sellers today), the same company later released the non-property-based Ninja Warriors: Enemies of Evil line. Dojo Kan, Dragonmaster, Lord Taka, Nunchuka-San, Scorpia and Starcaster (and some rare variants) were TMNT-scaled figures with modest articulation, some decent if not goofy weapons, and some downright wacky costuming.

Center below is my absolute fave of the run, Dragon Master, who looks like Dumb Donald from Fat Albert joined HYDRA! 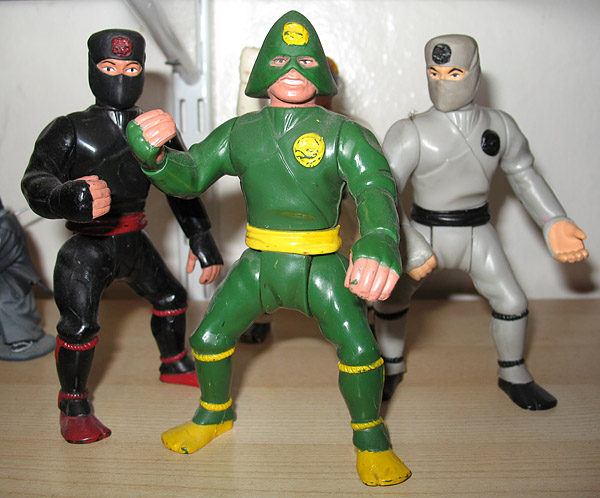 Well last minute shoppers, a whole pile of these pups have shown up on eBay this month, some priced to sell, others laughably over-priced, but all worth a look. Both of these sellers have multiple listings:

This was a real hit-or-miss line – most are better without the shiny cloth robes. Some have nothing to do design-wise with anything ninja or Japanese for that matter. The weapons are nothing to write home about, but I do adore that Dragon Master, and the basic black and grey figures are nice, wholesome meat-n-potatoes 80’s ninja toys. What’s not to love…