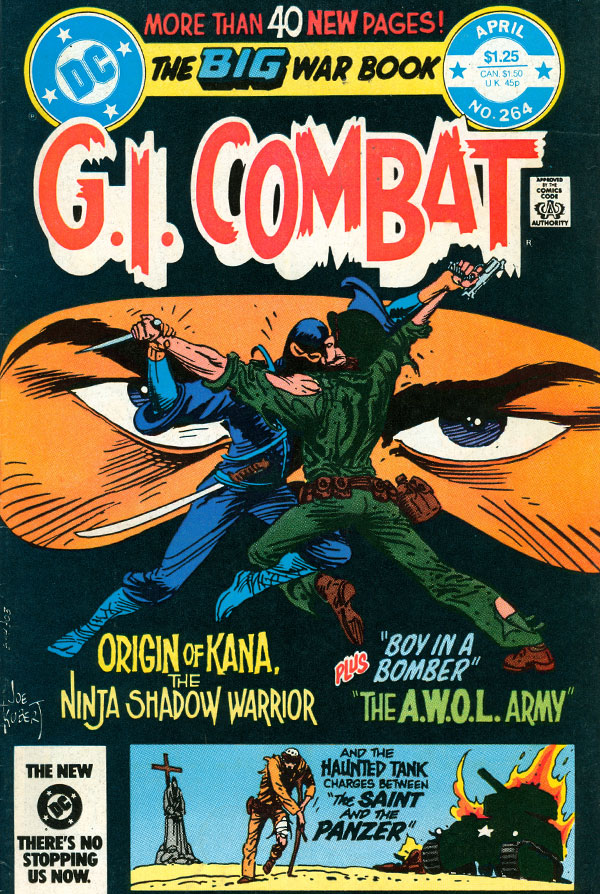 It was August of 1981, a few months before Enter the Ninja would kick off the outright “boom.” The word “ninja” wasn’t a household term yet, but between Shogun on TV, Eric Van Lustbader (The Ninja was already a bestseller) and Andrew Adams’ historical writings in print, and Western market films like You Only Live Twice, The Killer Elite and The Octagon, it was already a hip buzzword for the action-fan-in-the-know.

And when a few old dogs of the war comics genre – namely editor Murray Boltinoff, writer Robert Kanigher and artist E. R. Cruz –  learned a new shinobi trick, they were way ahead of the curve. 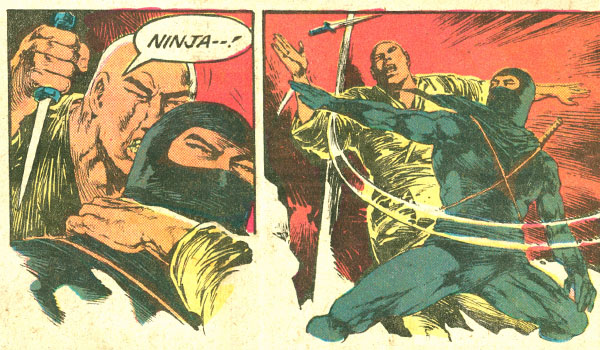 G.I.Combat was a title that went back to the early 1950s, published by a few different companies that were ultimately swallowed up by the entity now known as DC Comics, where it remained a throwback to the days of tommy guns and two-fisted ratzi-killin’ grunts through 1987. “The BIG War Book” as it was called, was a monthly anthology of battlefield carnage with The Haunted Tank as a frequent cover feature and SGT. Rock a routine guest. Back up stories would vary from tales of ‘Nam mercs to WWII Frogmen, and, starting with issue #232 KANA: THE HUMAN KILLING MACHINE! 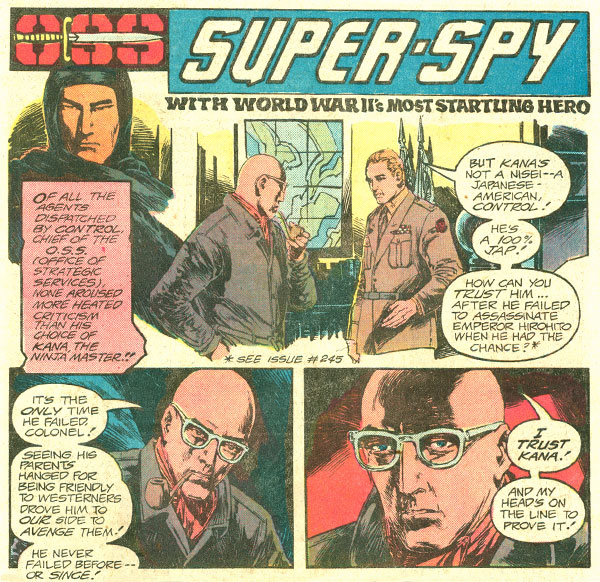 Kana was actually part of a sub-anthology within the anthology. “O.S.S. Control” was a spy-master segment host (think Cryptkeeper with a secret filing cabinet) who recruited the warrior for his stable of outre and unlikely agents. Trained in the traditional shadow arts, Kana turned his back on his imperialistic government and fled Japan after his parents were executed for being friendly to Westerners. When the U.S. entered the war, Control put him to good use fighting his former country’s evil military in the Pacific campaign. 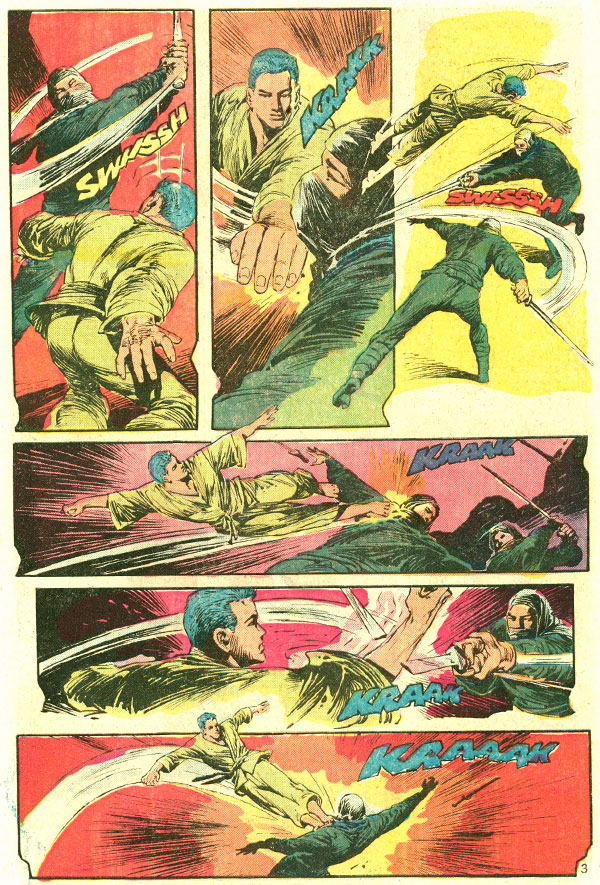 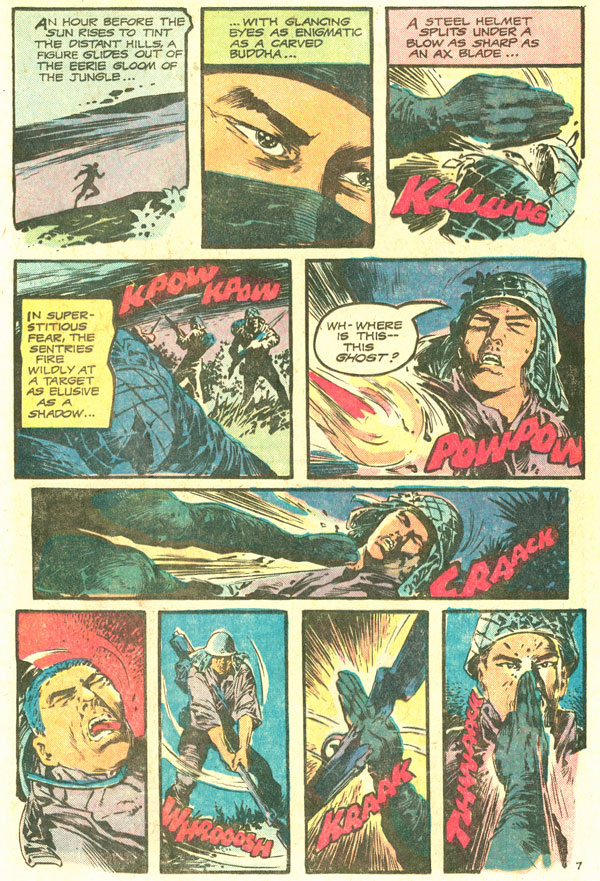 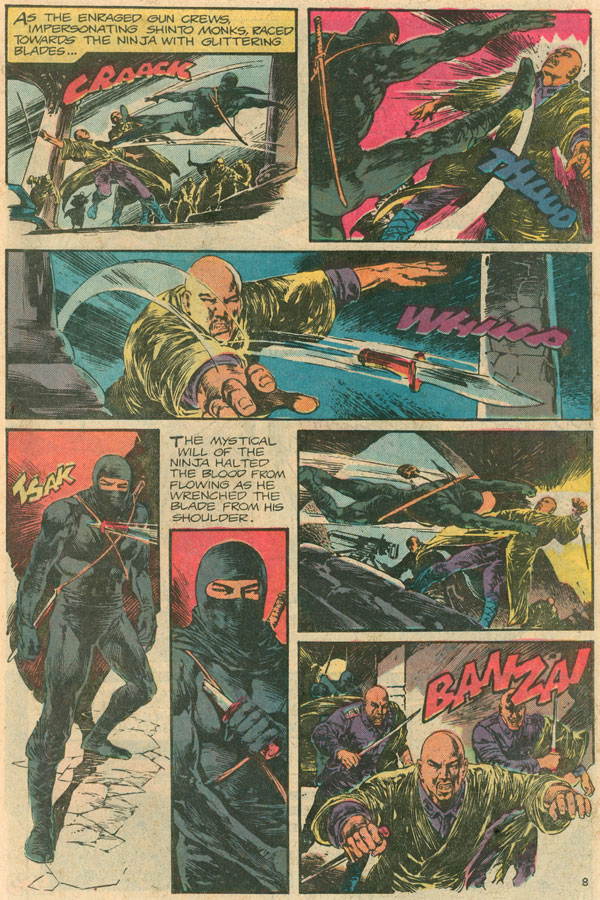 “World War II’s Most Startling Hero” was featured in 8-to-10 page adventures with titles like “The First Kamikaze,” “War Isn’t Color Blind” and “My Sergeant…The Executioner.” At first they were somewhat formulaic; a Pacific island mission would need a local scout or undercover saboteur. Partnered American soldiers unable to trust a ‘Jap’ would just assume shoot him in the back, until he saves their lives by taking out a jungle pill box with throwing knives or knocking out a man-eating shark with karate. Then he’d single handedly sink an enemy sub or take down a Zero with a blow gun, to no thanks, and stoically wait for the next shadow mission, unsung hero of the night. 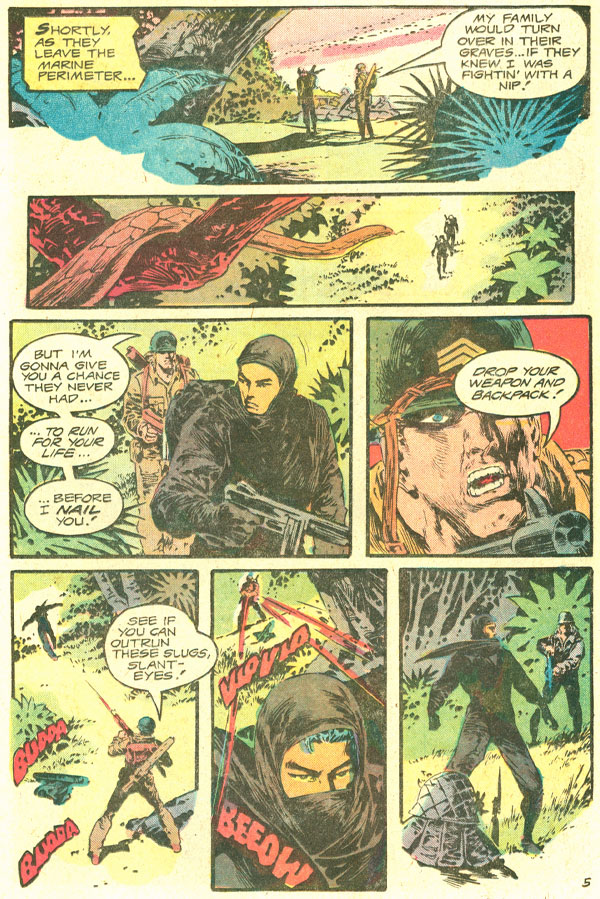 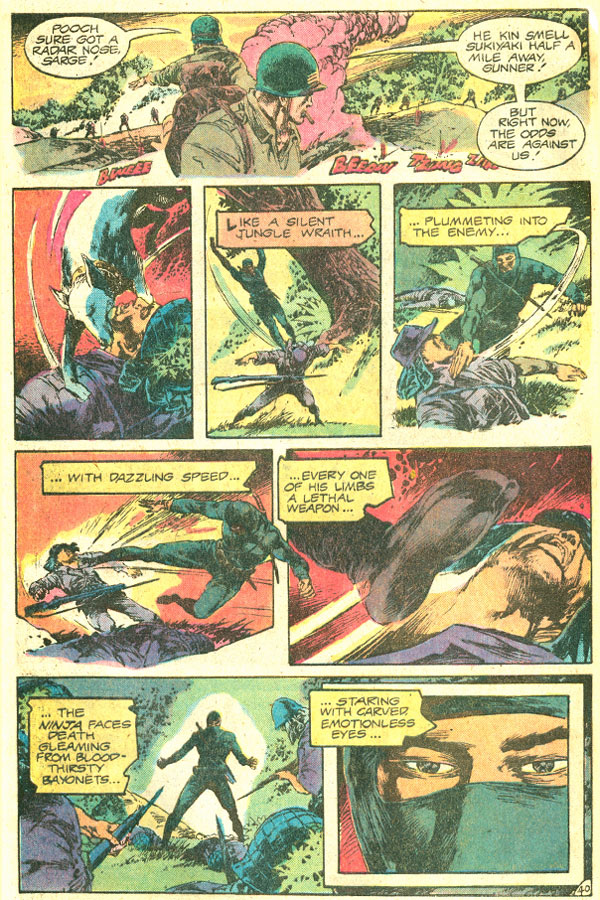 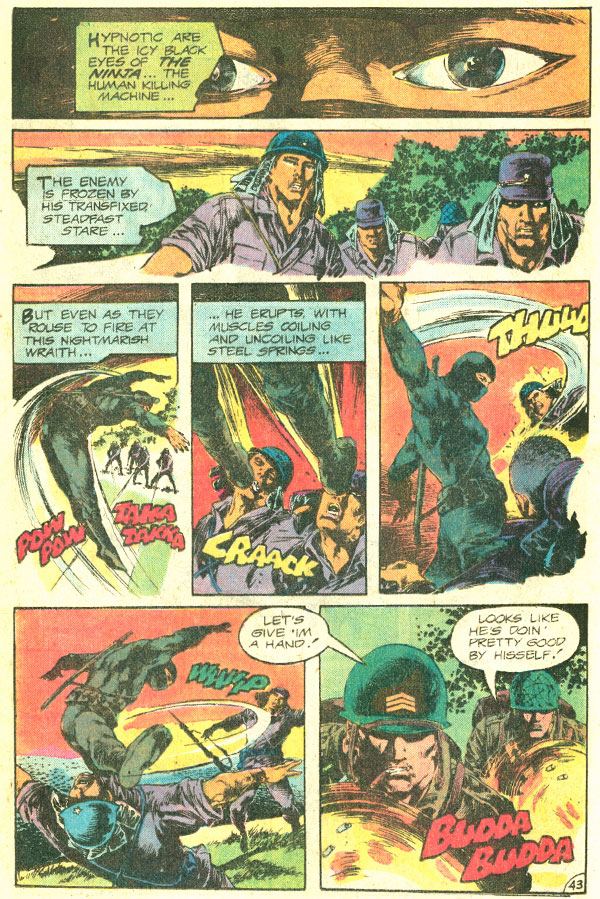 Most of the martial arts action in the Kana stories was karate/kung-fu-based, filtered through commando action that could just as easily be British SAS as shinobi-based. The creative team had a general notion of ninjutsu, but it wasn’t until 1983 or so that they were crossing the Ts and dotting the Is, injecting a healthy degree of weapons fetish and Japanese terminology prevalent in other craze-era media. By this time, Frank Miller’s work in the smash-hit Wolverine mini-series was setting the high-water mark for ninja portrayals in American comics, so Kana’s creative crew were definitely trying to raise the bar. And they got some of it right… some. 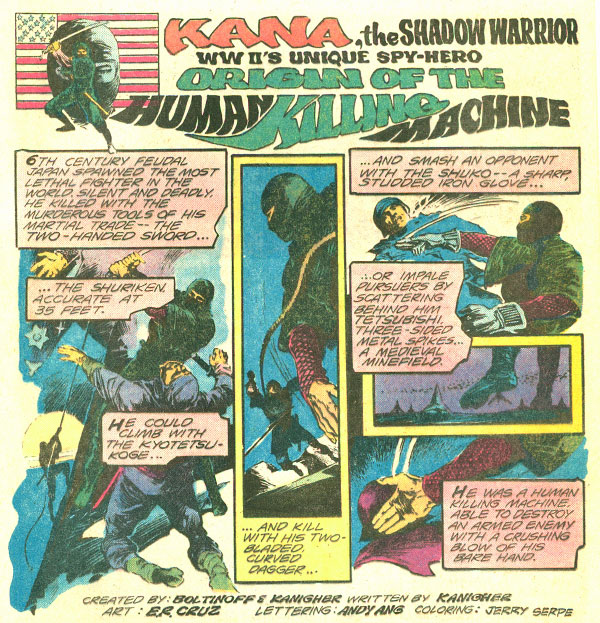 The mesh-netted sleeves are clearly from researching Japanese costuming, but their notion of shuko climbing/fighting claws is from Mars. I’m not sure how one even knows what a shuko is and still gets the portrayle of it so wrong… to the point where it’s a European knight’s gauntlet fer cryin’ out loud. This same story featured flashbacks to “samurais” [sic] whose armor looked more Mongolian or even Turkish than Japanese. So there was hot-and-cold running authenticity and credibility, but when they were right on, the results were just beautiful: 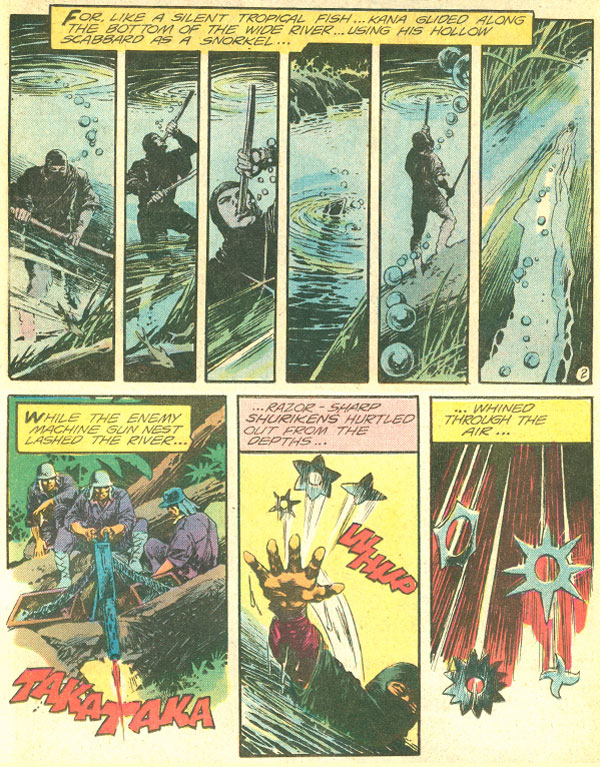 The last five Kana stories (scattered from issue #264, April 83 through #279, September 85) saw things take a strange, if not completely f’n brilliant turn that sadly seemed to doom the character with G.I. Combat‘s traditional audience. Through deep mystical meditation (again, a nugget of research and a heap of WTF), Kana honed the ability to send his soul/spirit tumbling through time, Quantum Leap-style! 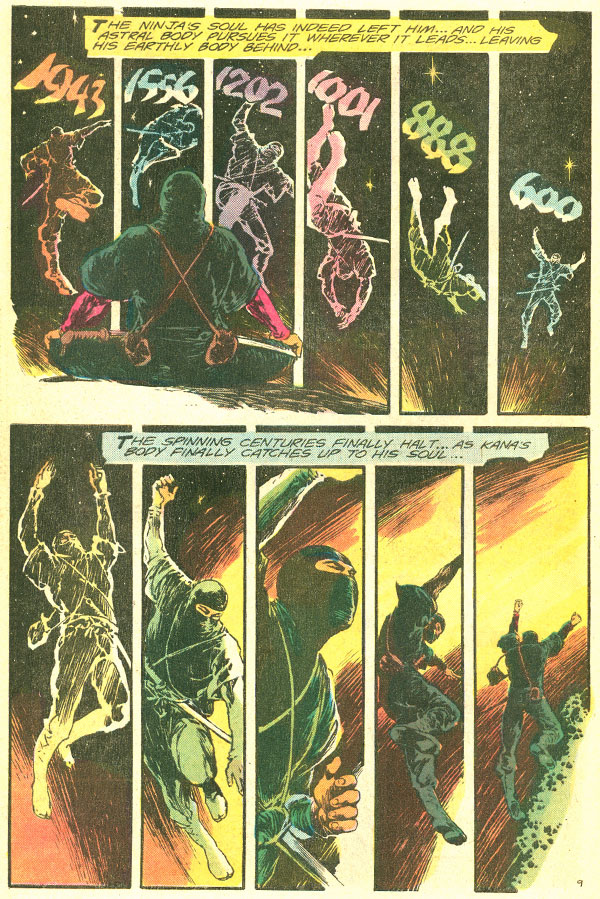 This was the same year DC rebooted Western-era scarface Jonah Hex as a 21st century intergalactic ray-gun-slinger, so why not a time-tripping ninja? There was some serious potential here! A few stories were set in Kana’s own ancient past, yielding the origins of his clan’s ninja occupation and romantic interest ala Somewhere in Time. But then some cosmic event caused him to lose control of his powers mid-projection, and things got truly awesome: 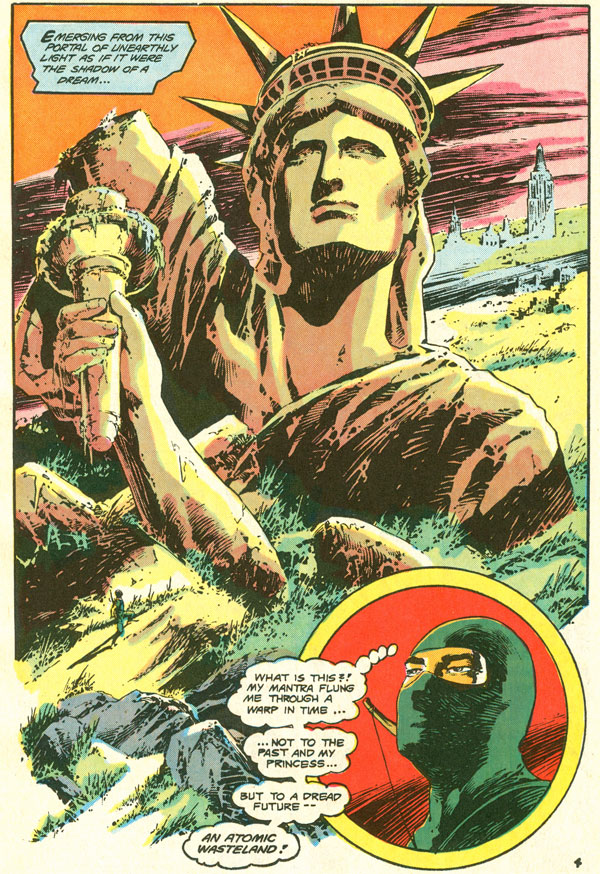 Traditionally-geared shinobi flung out of WWII into the post-apocalyptic future where he fights biker gangs? SOLD!!! 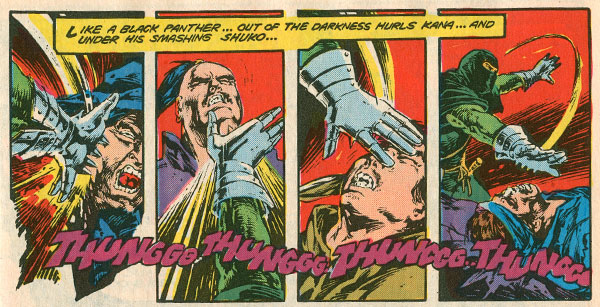 Sadly, this was the last we ever saw of the WWII shadow warrior. Not only did Kana not have a future (or a FAR-future) but G.I Combat itself was cancelled in 1987. Dammit!!! Make TIME NINJA it’s own book and it would have been a monster hit back then. That shit would have made the jump to cartoons and action figures in a heartbeat.

So why didn’t it? Why is such a gem of the early ninja craze a mere footnote rather than a fan favorite that by now should be on it’s third or fourth reboot?

I think it comes down to adaptability, or lack thereof.

When I referred to G. I. Combat as a throwback, I meant it. Properties like SGT. Rock and The Haunted Tank were created by guys who were there, or at least lived during the World Wars and Korea, and those two-fisted men’s adventure magazine sensibilities pervaded everything they did. Judging from who was writing into the letters columns, I’d also bet they had as many older vet readers and active military adults as they did kids, so they were definitely speaking to a long-standing audience.

Kana may have been a new ninja character for the very new 80s, but it was written by men in their late 60s, so the work had that voice from another era. Meanwhile other military-based books were embracing the mania at hand. The debut of Storm Shadow turned G.I. Joe into a red-ninja-infused blade-fest starting in March of 84, while Marvel’s other red ninja, The Hand, were regularly battling Wolverine and Daredevil. Further down the shelf, indie titles like Ninja High School, Whisper and Shuriken  – books that were sooooo 80s – better represented contemporary art styles and costuming aestetics.

The Kana stories never relinquished their authentic military tone for the simpler 2-dimensional crutches of red ninja, gadget weapons and manga-derived superhero action of their peers, but that same poise and mature perspective probably didn’t resonate strongly with young readers. Not with competition like Snake Eyes out there. And let’s face it, if a kid had no interest in grenade-lobbin’ Leathernecks or a tank crew led by the ghost of Civil War general, he wasn’t going to waste a hard-earned mid-80s dollar just for short back-up story that happened to feature a ninja.

I like to think if Kana had become the cover feature, G.I. Combat could have run a few years longer. Or maybe the same move would just have isolated what was left of the old-guard readership that was keeping them afloat, and they would have ended up just as cancelled… 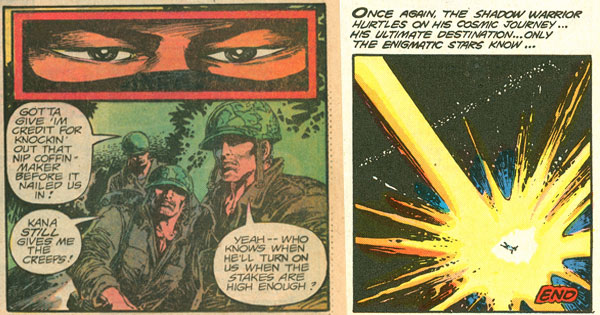 Maybe what Kana needed was a change in creative team and a mutation to something between Dr. Who, Captain Kronos: Vampire Hunter and Kamandi, with shuriken. Speculation is pointless. All I know is **I** would have bought the HELL out of TIME NINJA!