It was the winter of 1984 that Marvel Comics and creator Larry Hama quietly let loose one of the most significant pieces of media of the entire 80’s craze. 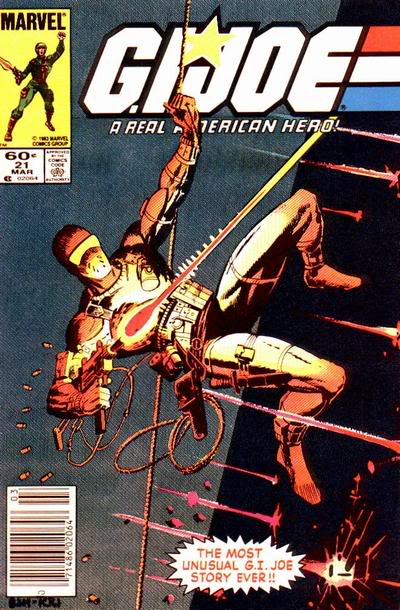 Seeing as the massive and ridiculous GI Joe movie is #1 at the box office this week, I felt a look back at “Silent Interlude” was in order. The ninja aspects of the Joe property is perhaps he biggest reason the “Real American Hero” version of Joe has endured for a quarter century and is now entrenched in a new generation of kids.

The 80’s comic and cartoon tandem was a pretty shameless one-two-punch toy selling juggernaut. It would have been an insufferable piece of kid-corrupting consumerism except for a few things: the toys were cool as hell, the comic had all sorts of maturity to it, and in it’s second year it got a major boost from an injection of shinobi steroids!

The commando ace Snake Eyes had been the coolest character of the series since its inception. The enemy’s counter, evil white ninja Storm Shadow, was a welcomed addition. But in issue #21 of the comic, Larry Hama upped the ante – he gave them a mutual pedigree of ninjutsu training and an intertwined past. The rest is history.

‘History’ also describes the issue itself, which breaks every rule of ‘kiddie books’ – using no dialogue or exposition whatsoever to reveal a treacherous night-op rescue mission in a ninja-infested castle. It’s a storytelling triumph, and gave the otherwise commercial-oriented comic book all sorts of artistic credibility. It’s a certified classic, studied by artists and writers in training, and should be owned by any self-respecting ninja fan. Don’t overlook this…

Read more: besides this great wiki, read a summary (and dig around for tons of figure pics) here, a nice anniversary tribute here, get some great behind-the-scenes creator info here, and another good blog post here.

But I think the coolest way to experience this seminal piece of 80’s ninja history is to find the reprint and matching action figure pack, seen here!