With the 80s craze came a lot of repurposed merchandise – stuff that for the previous decade’s boom had been sold as kung-fu gear now emblazoned with ninja logos. The above looks to have been a Chinese-esque design probably inspired by something David Carradine tossed around on network TV. But any 70s leftovers were given new life in the “ninja star” obsessed 80s. 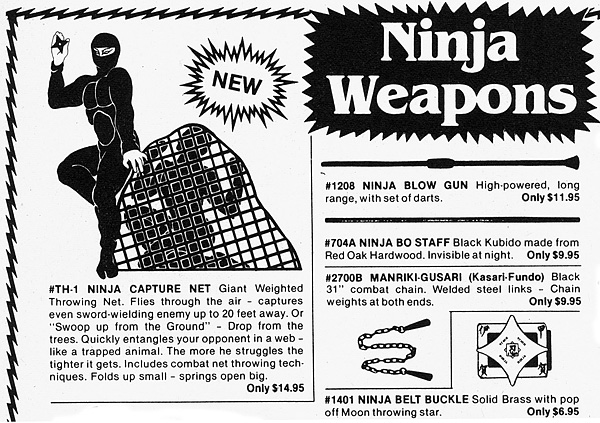 Now just what made a net a “Ninja Capture Net?” I don’t know, and I never this particular item, but I’m pretty certain it was some type of conventional fishing deal shinobi-fied for mail order. They made some pretty strong claims here about the net’s effectiveness. Not sure I’d trust something I mail-ordered for less than $15 against a “sword-weilding enemy.”

I also like their observation for item #704A – A black stick is invisible at night!

Nothing however, beats my all-time favorite piece of repurposed merchandise, the Ninja Boomerang.