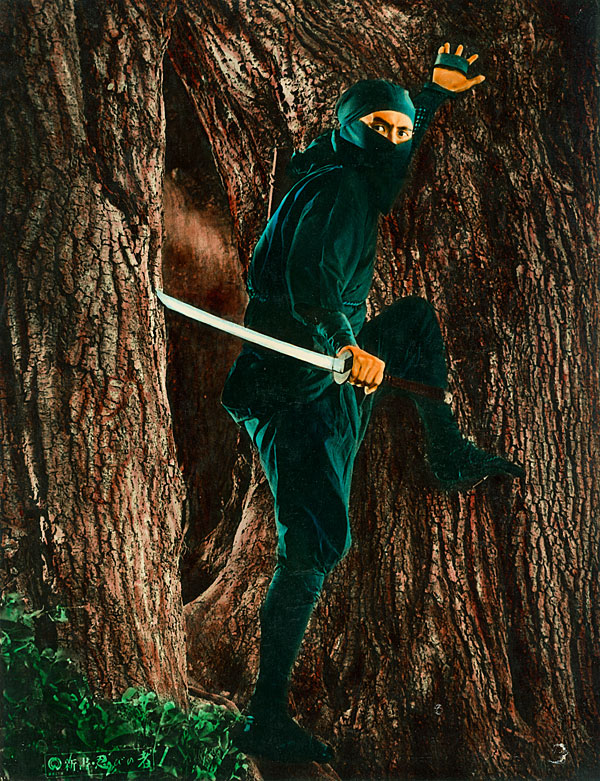 More of the amazing hand-tinted, one-of-a-kind press photos from Thai cinemas, this time to the franchise prequel/reboot Shinso Shinobi no mono, sadly Raizo Ichikawa‘s last time under the hood.

These individually colored photos are on a different paper stock than previous ones I’ve scored, a smoother tooth that because the dyes sat more on top of the finish rather than getting absorbed into the fibers, yielded a much more saturated color. The colorist on this particular batch was pretty heavy-handed as well. The results are a bit awkward, even sloppy, but when the colors do work they pop like a candy dish.

The below pose will be familiar to anyone who has the movie poster: 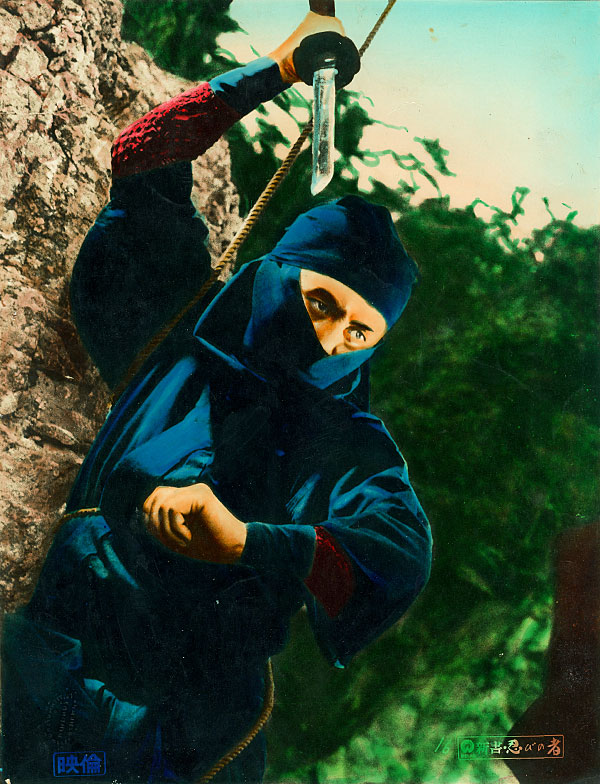 Although a different ‘take’ from the same shoot (note the different eyes), what you can see here is the difference between dyes applied right to the surface of a photograph vs. a 4-color process then halftoned and printed in bulk. 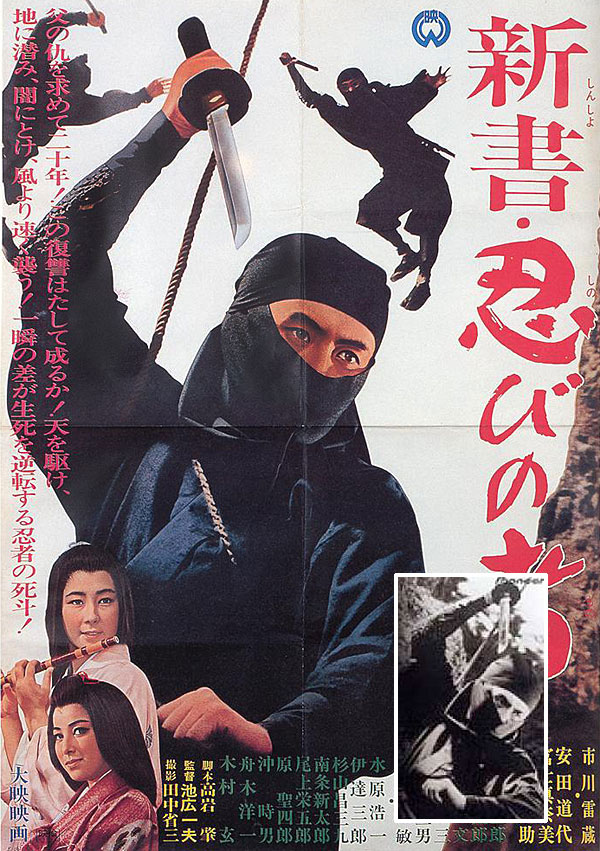 Unlike the more demure Japanese advertising, these rather over-compensated Thai colors get downright silly sometimes… 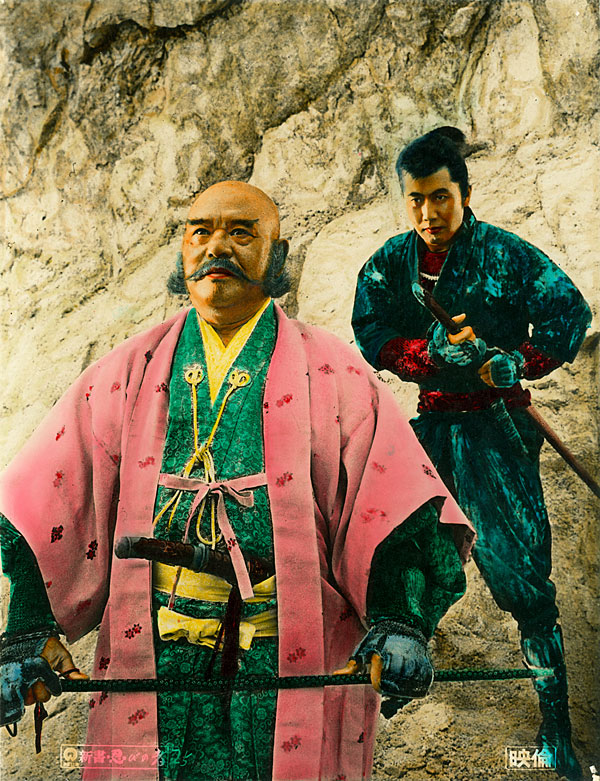 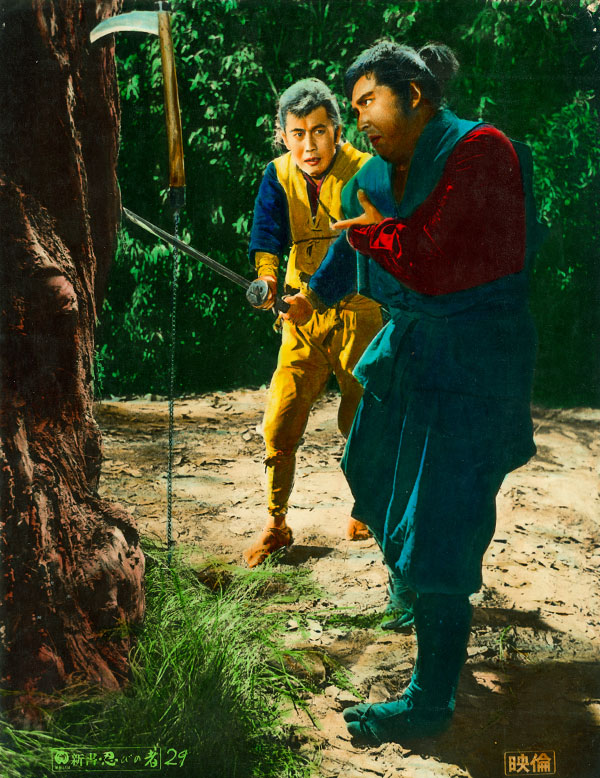 OK, so you, my loving audience, by now must be asking “Keith, we just want ninjerz and stars and claws and boobs and shit, why are you always boring us with this antique printing methodology and vintage P.R. crap!?!?!”

Well, you’re just going to have to suffer, because these hand-tinting techniques are not only of personal aesthetic joy to me, they’re actually a big part of my family history, so take a seat and grab a notebook cuz this will be on the test.

My grandfather Levi Rainville was a renowned photographer in central Massachusetts going back to the mid 1920s. Post-war, when he had started the original Rainville Studios he  actually employed professional colorists for formal portraits, the likes of which are still hanging in the town halls, libraries and schools of several Blackstone Valley mill towns.

My dad Arthur, who inherited the family biz, remembers the techniques from when he was a kid hanging around the darkroom. ( I did the same thing in the 70s, and probably got into too much chemistry, resulting in my totally normal and balanced demeanor today!)

The colorists (all women, for some reason the trade was considered for females, at least in the States) would start with a sepia-toned photograph which by default gave a warm beige skin tone as a base. Transparent oil paints (the time-trusted Marshalls Photo Oils are still made today) were applied in thin layers, built up thicker and more opaque where necessary. Sometimes pure white paint would mask out the sepia for eyes and teeth.

The half-photo, half-painting result gives these images a truly timeless quality. Shinso Shinobi no Mono is a movie from the mid 1960s but these images could almost be hand-tinted antiques from the 1860s. 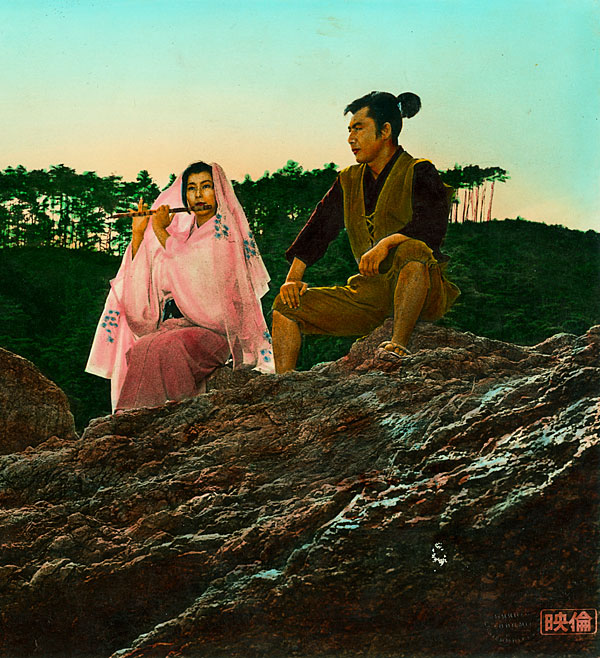 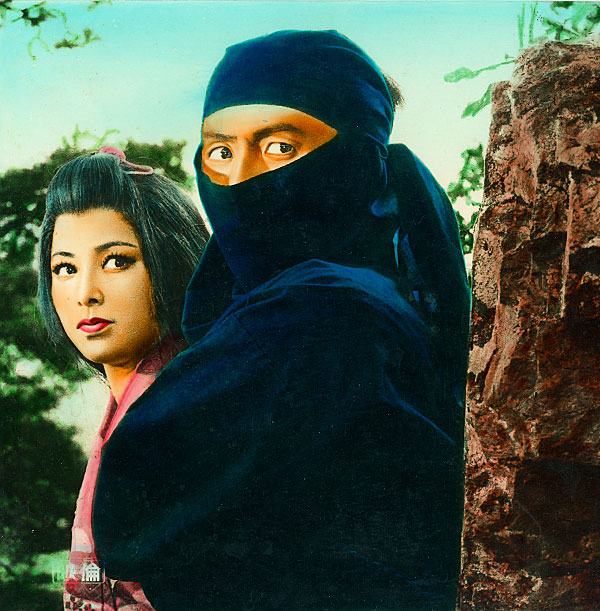 I’d love to see more copies of these exact photos, curious about the quality of coloring. Each copy had to be colored individually by hand, so each is unique onto itself. Were these particular copies a Monday morning labor or a Friday afternoon rush job by an impatient clockwatcher? Should they have been more subtle in their hues, or are there even more garishly over-saturated versions out there?

And… oh, I’m sorry, did you want me to return to topic or something???

Fine! If you haven’t seen it, Shinso is one of the best entries in the Shinobi no mono series, and as it stands alone from the rest of the seven flicks is a great jumping-on point for noobs. A young ninja sees his father murdered by three samurai, grows into a consummate warrior and goes on the revenge hunt, inflicting the same wounds that killed his father back on them one-by-one. Being late in the series, this film benefits from the lessons learned by the earlier entries – there’s lots of action, ninja training, hooded combat, arcane weaponry, beautiful women in peril and “Japan’s James Dean” Raizo Ichikawa being the amazing star he was. Great stuff…

But man oh man, look at those hand-tinted colors!!!!

Here’s a tutorial on the techniques. Man, what a pain in the ass! No wonder they invented Kodachrome…

Some of the earliest photos of Japan were hand-colored.

Wallace Nutting was a famed source of hand-tinted photography in New England.  My grandad sold these when he was young and my folks collect them to this day.