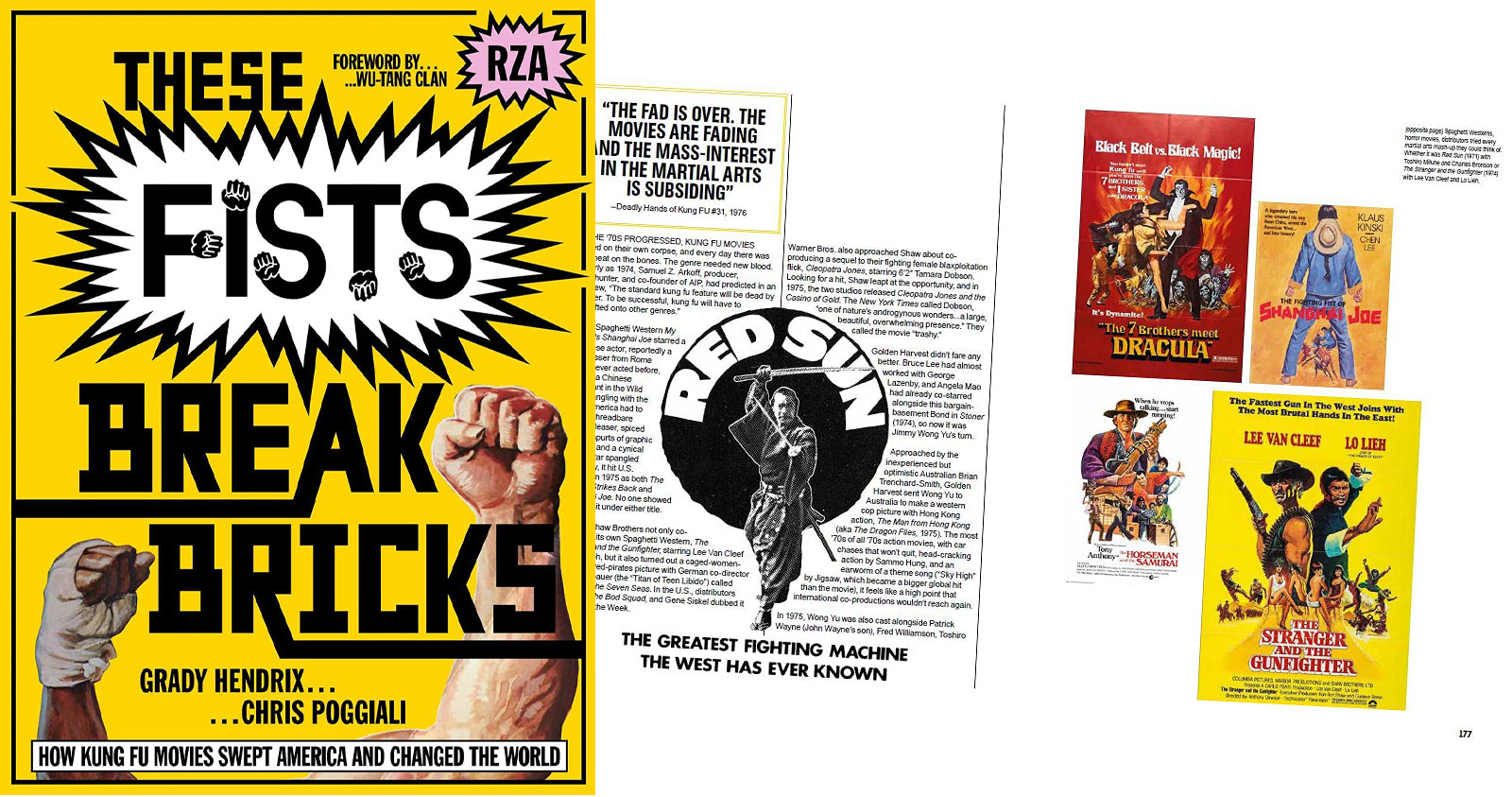 I have great appreciation for a new worthy cause to wipe out some trees, and as an author, book designer and marketing pro myself, These Fists Break Bricks hits me in all three of my hearts! For starters, this 330+ page beast is littered with vintage movie posters and advertising from decades of martial arts movie marketing. But what I’m really taking away from this book — and why I’m endorsing it as must-own — is the way authors Grady Hendrix and Chris Poggiali have blazed the otherwise well-trodden path of martial arts cinema books in a way no one else ever has. This isn’t a book about martial arts or martial arts movies, it’s about the martial arts movie business.

I love two things underlying the editorial slant of Fists right off the bat. Fundamentally, they aren’t apologists for the exploitation nature of martial arts movies — there’s no punching down or lamenting of cinematic quality here. Secondly, and perhaps more importantly in these times, there if a full-on celebration of how martial arts films crossed-over audiences and the cultural importance of an Asian-produced film genre being so strongly embraced by black and Latino communities in the United States, never more apparent than during the birth of Hip Hop.

It’s also nice to see some rare documentation on the earliest pre-historic entries into the martial arts genre, dating as far back as the 1930s, with some special flowers given to the obscure gem Karate: Hand of Death. But the bulk of Fists moves past the occasional judo fights in mainstream movies and the splash created by Billy Jack and dives deep into the magical 1970s, when karate and kung-fu films both foreign and domestic took over Times Square theaters and from there changed the world.

Chapters and sidebars dedicated to the 70s cover everything — from the obvious giants like Bruce Lee and the Shaw Brothers, to Brucesploitation, fear-mongering self-defense ads in men’s magazines and comic books, martial merchandise, hybrid horror films, high-kicking superheroes, and more.

The depth of knowledge on display here when it comes to film distribution, touring prints and the festival circuit and non-English-serving movie theaters in pockets throughout the country is invaluable, and is the true backbone of the book. The business of martial arts movies, and what those financial booms both reflected from and influenced into our popular culture has never been explored like this.

More specific to our purposes here… a massive chapter on the 1980s has all the same takes properly ninja-fied for the new decade, but I’m also impressed by attention given to the business groundwork laid by changing distribution models of older Asian films, and how they were newly repackaged for the burgeoning cable TV industry. This kung-fu mini-revival tilled fertile soil and became a structural example that  allowed the new ninja craze to truly take off. The same business notions would influence the pending VHS boom, to which we all owe our continuing fandom.

I’m also appreciative of the spotlight they put on the early 80s negativity in mainstream media to the blood and violence of martial arts movies, and how these films were dismissed as low quality imports to the point of vilifying the cultures they came from. It was way to easy for even the highest levels of film criticism to punch down on the entire genre, and by extension, the part of the world it came from. This directly tied to another phenom they cover — a string of unrelated crimes of varying degrees all over the county that the news media lumped into a ‘ninja crime wave’ due to the coincidence of mail-order ninja suits warn by the alleged perps. I lived through both of these periods and reading about it now brought back all sorts of memories of Siskel & Ebert hating on anything martial arts while 20/20 did yet another expose on the impending societal downfall if zinc-alloy katanas continued to be sold in Chinatown smoke shops.

Whenever I can learn something about the ninja craze I never knew before I’m absolutely pumped, so it was great to read brief forays into some things that could-have-been but never-were — the abandoned mid-1970 development by David Parks (son of Shaft director Gordon Parks) of a ninja film possibly inspired by the teachings and demos of Ronald Duncan, the never-made Pray for Death sequel, then a poster for a proposed action comedy with Sho Kosugi and Paul Smith (Midnight Express, Red Sonja), another poster for what looked like a post-apocalyptic ninja movie that makes me want to dimensionally travel to an alternate reality where it exists… in all, lots of nuggets here we’ve never seen before!

These Fists Break Bricks isn’t a martial arts movie book — it doesn’t critically review any one film, rank the Bruce Lee movies or compare fight scene choreographers to one another. It assumes you know and love this stuff already — and we do — and instead gets granular with the film business behind the martial arts — the studios, distributors, the market conditions, the box office draws and the mutations of genres reflecting different times — the why’s, wherefores and hows that led directly to me sitting in my living room in 1984 wearing thin a slow-speed VHS recording of Revenge of the Ninja off HBO.

Stuffed as my shelves are with martial arts movie books from the past 40 years, this work fills a distinct gap in the study of the genre I never even realized was there. I love this book and think you will to, go buy it!

Get it from Amazon here.