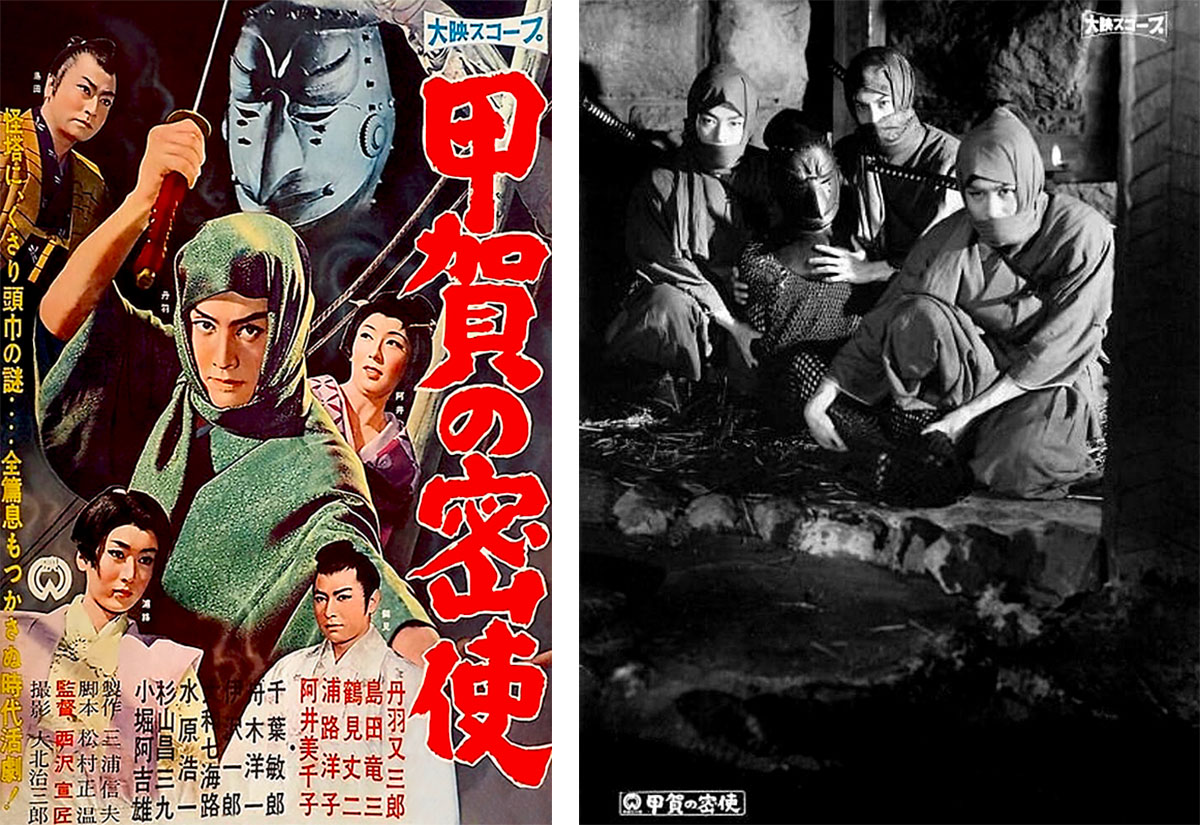 Once in a (sadly, increasingly seldom) while, an old ninja movie never before available will surface out of Japan, and man do we have a shiny new toy to play with this month!!!

Daiei’s Koga no Misshi — coined “Wrath of the Koga Ninja” by the grey market (direct translation would be along the lines of ‘The Secret Messenger from Koga’) — is a 1960 black & white ninja film that like the late 50’s Sarutobi Sasuke film has one foot firmly in the plucky, swashbuckling 1950s and another in the grim-n-gritty 1960s ninja boom. It’s behind-the-times and ahead-of-the-curve at the same instant, and in this case gives us the best of both worlds.

The benign lord of the Mizorogi clan is being slowly poisoned by an evil faction looking to interrupt the chain of succession and take over the province. The proper heir has gone missing, but his resolute bride-to-be Princess Mari smells a rat and takes matters into her own hands. She enlists the aid of the Koga ninja she grew up with, and ample action follows centered on freeing the prince from the castle dungeon, where he is encased in a crow-themed iron helmet and body-length gown of excruciatingly heavy chain mail anchored with weighted balls. You’ve gotta see this thing! Rescues and red-herrings ensue, with equal amounts of samurai swordplay and realistic ninja arts (no black magic here) on display.

GOD I LOVE THIS MOVIE! 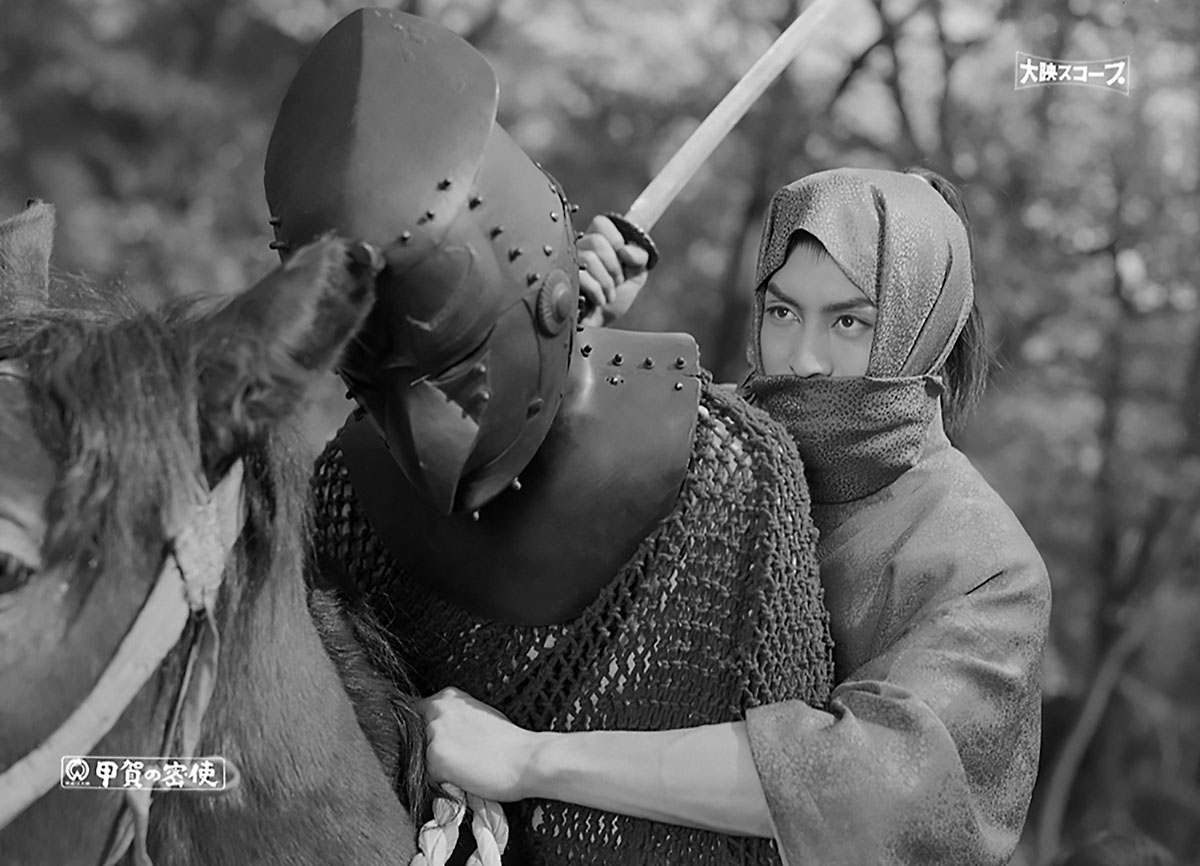 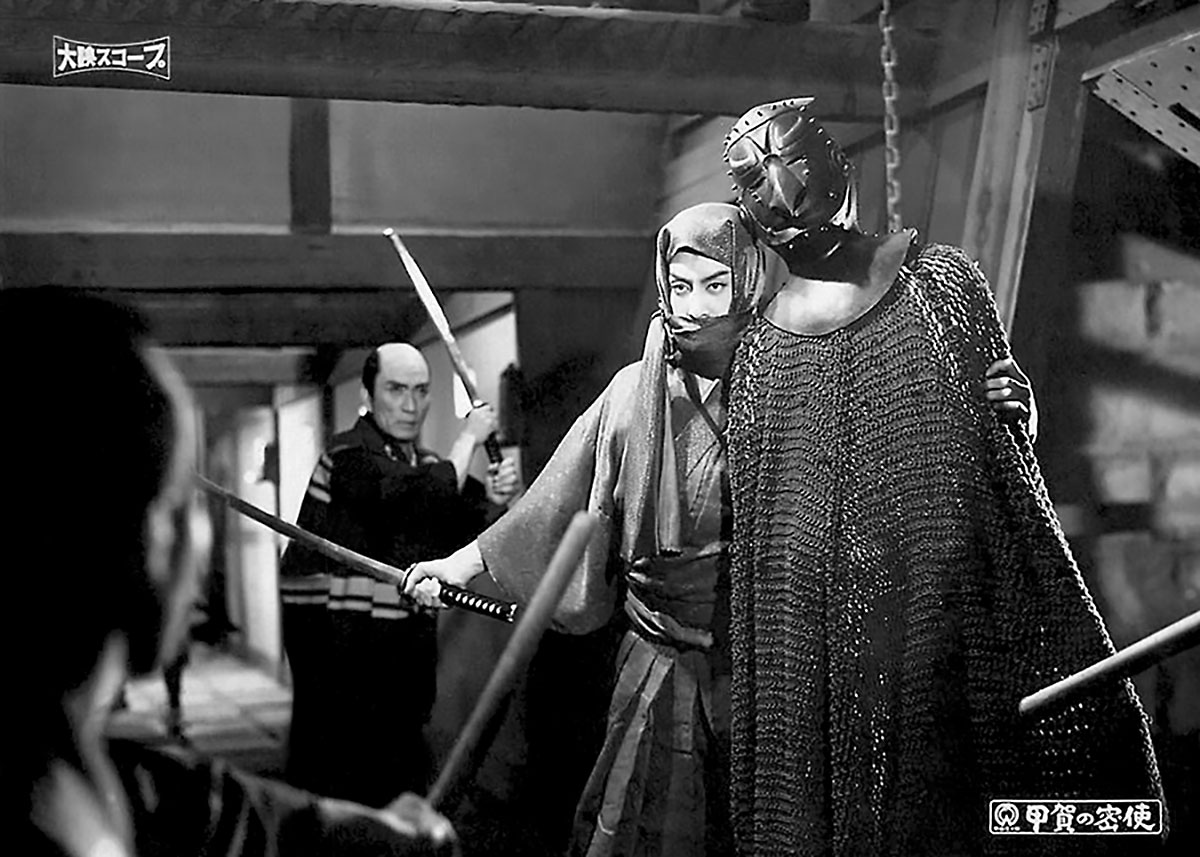 Even if there wasn’t a single ninja element here, the crazy torture suit is enough to inspire fascination. Add to that a rather kick-ass female lead and a fast-moving action-drama coming in at a trim 74 minutes, THEN inject a whole pile of shuriken-slingin’ black-suited warrior spys and what’s not to love.

This is a well shot, well directed flick with an aggressively surging plot and a rather engaging cast. Matsaburo Tanba as Ryunosuke, the eponymous Koga ninja, has square-jawed matinee idol qualities, but the character is more complex — he’s a resolute hero, but with motives that might be more romantically driven than is good for him or anyone else involved.

Yoko Uraji as the princess is the actual heart and soul of the picture, and her dedication to her man, and thus the clan, is the compass that allows all the swordplay to reach a proper outcome. She’s also bushi through and through, and is often seen in a traveling hood that metaphorically mirrors that of the outright ninja. It is mission gear to her, but she’s not of the shadows, the bright, fancy hood reflects both her personality and her status.

The action hero, flawed by romantic hang-ups, and the spartan princess who’s never a damsel-in-distress, is a nifty tonal gender-flip of more typical fare that I find refreshing as hell.

Complicating matters is the presence of Oyuki, another Koga ninja and another female character stronger than the men around her. She loves our hero, knows she’s better for him than the forbidden dream that is the princess, fights through the heartbreak of unrequited love, and endures even worse physical tortures — but never loses focus on what must be done. She’s a kickass kunoichi and a character that deserves a better fate for sure.

The villains are perfect — immediately set apart from the other cast by clearly evil facial hair — and are rather genuine, never over-the-top. Their one flaw is not being brazenly vicious enough to just kill their prisoners instead of holding them captive in iron suits…

This is totally a ninja movie, but it’s not fetishistic of the shadow craft the way the Shinobi no Monos, 17 Ninja, Ninja Hunt, Third Ninja etc. that would follow. What’s there is good — we see well-timed smoke bombs and caltrops put to good use. Also really nice are legitimate espionage activities of the non-black-suited variety — agents posing as bar girls so they can overhear drunken guards brag about their fortress then steal their uniforms for a latter incursion. This info-gathering and subtle spy work is historically credible depth often too absent in ninja movies.

The costumes are more realistic than expected too, in that many are just dark civilian clothing repurposed for commando work, and could easily be adjusted on the fly for an individual to blend in with a crowd.

But for the tropey weapon-hounds, there’s also some early star-shuriken on display, mostly from Oyuki, who briefly uses one for hand-to-hand combat, which you just never see in movies. There’s also a really nasty looking manji-star from out of nowhere!

What you don’t have with a movie this early is the 60’s craze thing where everything grinds to a halt so you can witness in exacting detail how poison is dripped down a thread onto a sleeping target or how a lock is picked on a wooden castle gate — nigh-educational segments that would become common genre vocabulary a few years after this film.

The previously mentioned foot-in-the-swashbuckling-50s is largely why — there’s nary a trace of the morose-ness or fatalism of the latter decade’s releases, no somber pacing mirrored by the precision work of a driven loner. The frantic serial-like pacing and equally 40s/50s-style rousing score leave little room for quiet shadowy work.

Things definitely get loud toward the end, when the spy game gives way to pure swordplay — and it’s standard katana, nothing ninja-specific. I’d say this is simply the 50’s-ness still influencing here, but plenty of 60s films end in traditional sword duels as well. Ninja is a sub-genre of chambara afterall, and the genre has its rules…

Sadly, by film’s end and a successful plot foiling, our hero can neither be with the one he loves nor love the one he’s with, but what else do you expect from a 60s ninja movie? The idea that a ninja can never escape ‘the life’ nor find normal love or domestic tranquility would be explored tirelessly for the next ten years. Daiei would obviously continue with b&w ninja movies that defined the decade, and I wonder if the always franchise-minded studio didn’t have further plans for this Koga commando.

Seeing as this film just sort of landed from out of nowhere, wouldn’t it be great to find out they actually did, and there’s a few more Koga flicks out there…

Wrath of the Koga Ninja is available from all the usual suspects and sellers of samurai DVDs. Highly recommended!