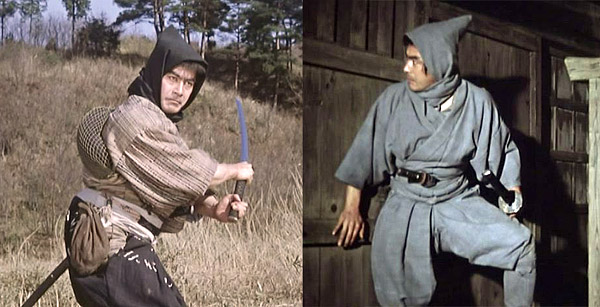 Everyone knows Toshiro Mifune, right? Shogun, warlord, admiral, ronin. But who knew he once played a ninja!?!?

Born on this day in 1920, let’s celebrate Mifune’s birthday with a look at a lesser-known chapter of his storied career – two ninja films he made with legendary director Hiroshi Inagaki.

Yagyu Bugeicho (The Yagyu Secret Scrolls, 1957) and Yagyu Begeicho: Soryu Hiken (Yagyu Secret Scrolls: Two Secret Swords, 1958) were two parts of what was possibly a planned but never finished trilogy. The story of the Yagyu clan’s struggle to keep their secrets under wraps is one of the most filmed in Japanese cinema history. A significant version, or two, has been produced every decade since the silent era, and contemporary to the two Mifune/Inagaki flicks, three other studios released different takes on the same basic tale.

In a nutshell, the Yagyu were the Shogun’s appointed sword instructors and held considerable power and influence in the government. Varying from film to film, they are either a force of good secretly keeping the peace (like Jushiro Konoe’s long running series), or an evil network of clandestine agents enforcing their own bloody agendas (as in the Lone Wolf and Cub films). Records of their martial arts techniques, roster of operatives or accounts of past and current shenanigans are kept in a number of scrolls that can either ruin their noble efforts or expose their insidious conspiracies, so everyone from the highest officials to the lowest of ninja are after them.

Here, the Yagyu are a sinister shadow empire, and when three scrolls go missing, victimized clans and desperate shinobi spring into action. Regardless of how they are portrayed, the Yagyu are always willing to throw countless family members to their deaths in defense of their secrets, so the action is on.

Enter two ninja brothers – Tasaburo (Mifune) and Senshiro (Koji Tsuruta) – last seen together a year previous as Miyamoto Musashi and Kojiro Sasaki on the beach of Ganryu Island in Inagaki’s famed Samurai Trilogy. Tasaburo accidentally gets involved in the scroll hunt, and sticks around for the affections of an intense princess played by Yoshiko Kuga. Senshiro is more duty bound, blindly loyal to the shadowy head of his ninja clan.

Brothers they may be, the two are in conflict most of the film, clashing over differences in motivation and their relations with women, but blood ends up thicker than paper. One of many secrets these shinobi carry is their unwillingness to harm each other regardless of orders.

Facing-off with each over the course of the two films is the ever present Jubei Yagyu, played in the squnty-eyed mode by Jotaro Togami. He’s great on screen, driven beyond family ties, deadly and intimidating.

These are Inagaki films, so one-on-one formal sword duels, often absent in the ninja genre, are mandatory – and they are superb, too. 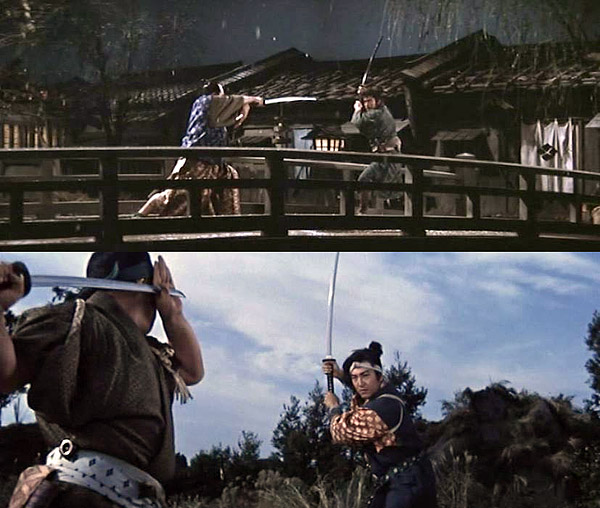 Tempted as the director is to fall into familiar territory like the above, these are still definitely ninja movies. Bridging two different eras of distinctly styled shinobi cinema, they are more in the pre-Shinobi-no-Mono swashbuckling hero style, but with a healthy dose of the social commentary and familiar themes of trying to leave the shadow life more associated with the next decade.

Ninja here are spies of a lower caste than the samurai around them, but their exotic skills are portrayed in a positive light. Inagaki loves effects-laden escape scenes, like this innovative use of fireballs.

But in tandem with classical pre-60’s ninja wizard tricks like this web gag. There’s even a brief bit of legit ninja ‘magic’ in the second film, somewhat at odds with the established credible reality around it.

There’s some nice commando gear featured, too, but without the outright fetishization of the shadow tools the 60s craze leaned on so heavily.

Each brother has his own signature shuriken, but they both use similar long swords with noticeably elongated handles. Veeeerrrrry cool! I love this Yagyu thug’s hand cannon, too! 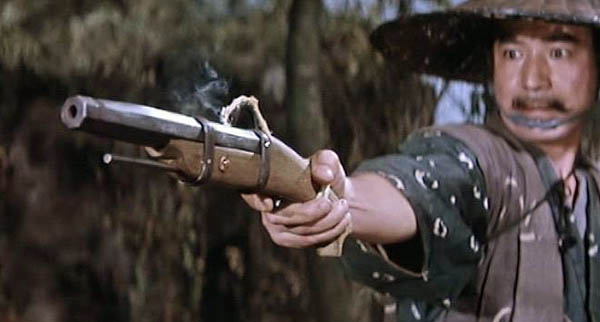 What I’m rather ga-ga about these movies is Inagaki’s treatment of the ninja costumes. Mission gear varies between simple black to charcoal grey to lighter hues, depending on the situation at hand. Why is this adaptive costuming so rare in shinobi cinema? 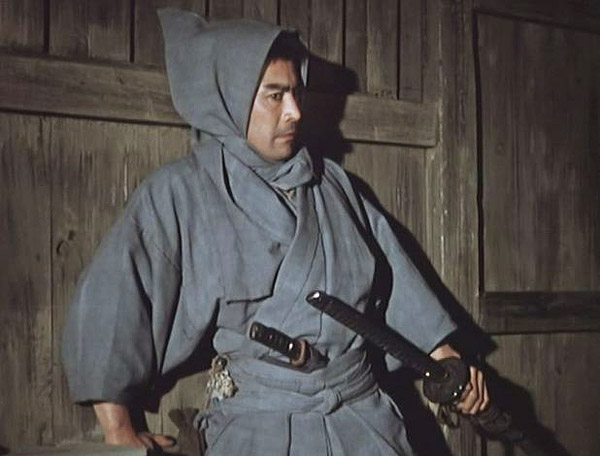 Another Inagaki ‘innovation’ – which really should be a lot more commonly seen but inexplicably isn’t – is reversible mission gear. Most of the ninja suits double as casual street wear, and there are some neat transition scenes.

Inagaki’s Yagyu films are positively magnificent – full of heroism, intrigue and tragedy; loaded with tense fight scenes and improbable escapes. The cinematography is on a level above the usual ninja fare. I adore stage-set ‘exteriors’ and he’s got some of the most stunning fake skies I’ve ever seen.

If there are any complaints here, it’s with the womens’ roles. Not unlike the women in The Samurai Trilogy, jilted for the greater love of swords, the otherwise strong female leads are pushed aside literally and metaphorically at any hint of combat.

Yoshiko Kuga’s doomed princess is a strong character, until she becomes little more than a walking plot device. Mifune’s conflicted ninja leaves ‘the life’ and gives-in to his passions momentarily, but not without tragic results that suck him right back into the secret scroll whirlpool. His brother has women flinging themselves at him left and right, including the jaw-droppingly beautiful Mariko Okada, who steals the second film as a wild-haired street dancer as trapped by the ninja life as either of the brothers. She ends up another of Inagaki’s unfulfilled widows of the warrior’s way.

Another thing a little distracting about these films is Mifune himself. In 1957 he was already a massive screen presence, but since then we’ve come to know him (especially in the West) as imperious and dominating. Our Mifune is more a shogun, a sensei, a noble even as a raggedy ronin, than he is a commoner on his heels, as in a film like Stray Dog perhaps.

With this perspective, he can look a bit silly scurrying around in ninja wear. I don’t 100% get the sense that this man belongs crawling around in the rafters or eavesdropping from below the floorboards.

I guess it depends on one’s exposure to Mifune’s broad range of work, much of it unseen in the U.S. 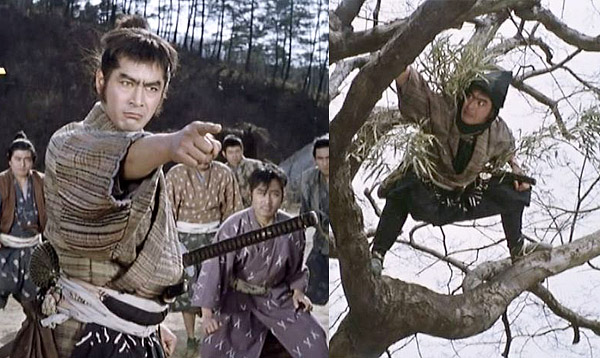 Regardless, Mifune’s Yagyu flicks are a must-see, as much a curiosity for Mifune or Inagaki fans as they are shinobifiles, and the broad sweeping adventure afoot will leave anyone entertained.

I myself am curious about the existence of a third film. The second is open-ended and ripe for serialization, and Inagaki was obviously trilogy-oriented. Mifune, however, may have been too busy with the SIX other movies he was in in 1958, including a little gem called The Hidden Fortress.

So if you want to commemorate what would have been Toshiro Mifune’s 91st birthday, grab these films from Kurotokagi.