In the 80’s, Sho Kosugi posed for over 73 billion photos in full night gear, laden with weapons, in magazines like Black Belt, Ninja, even Karate Illustrated and Inside Kung Fu. Yet when it comes to movie and video game ad campaigns, you often see painted and illustrated images of him instead – many leaving a lot to be desired. Sometimes it was agencies not wanting to pay royalties to photographers. Other times it was unscrupulous art departments not having any legal right to use a Kosugi image whatsoever, but wanting the box office rub. Either way, some very interesting artistic mutations occurred… 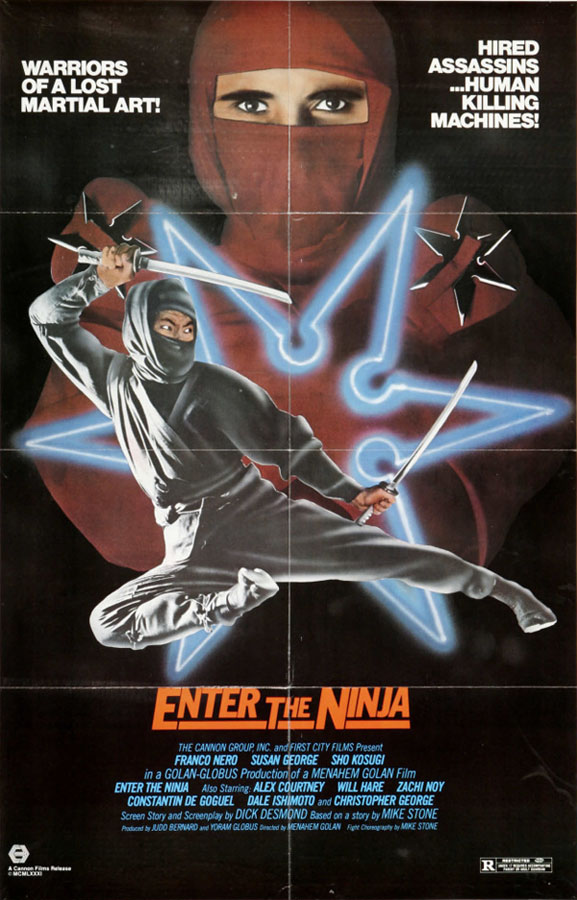 It started in 1981 of course, with Enter the Ninja. Golan-Globus scooped the big studio development of Eric Van Lustbader’s mega hit novel The Ninja with this exploitation gem (the American genre never recovered), for which Kosugi did some publicity photo posing. An air brushed version of what we’ll call THE KOSUGI KICK appeared on some of the posters (and VHS packaging), and soon after a retail poster we all had on our wall. The Kosugi Kick was henceforth knocked-off 15.3 trillion times, and you still see it today once in a while. The pose is one of THE lingering icons of the 80’s craze, perhaps the definitive image of the era. 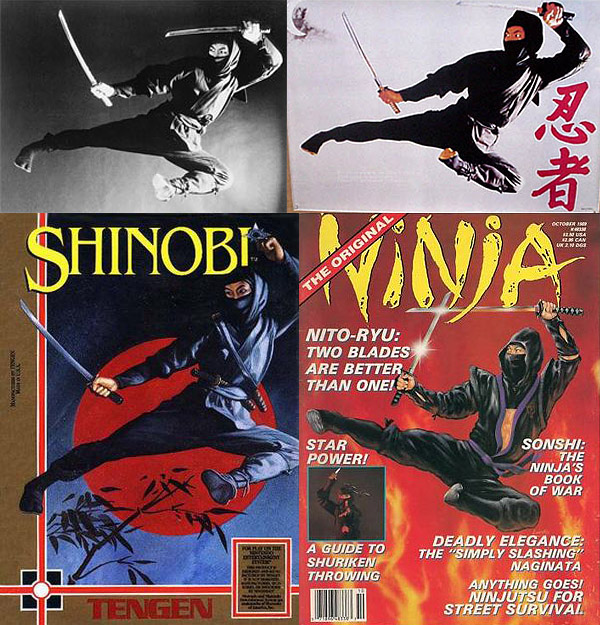 The follow-up to Enter, and the movie that cemented “the ninja craze” as the big thing in martial arts (and martial arts cinema) for the decade, Revenge of the Ninja, had a pretty dynamite painted poster itself. What’s easy to forget about the superb Revenge is that in it, Kosugi made history – an Asian actor being the single male lead, and in only his second film in the U.S. In reality, Bruce Lee never did that, being co-top-billed with John Saxon in Enter the Dragon (although after his death, amidst the kung-fu boom, the campaigns changed to feature him much more). 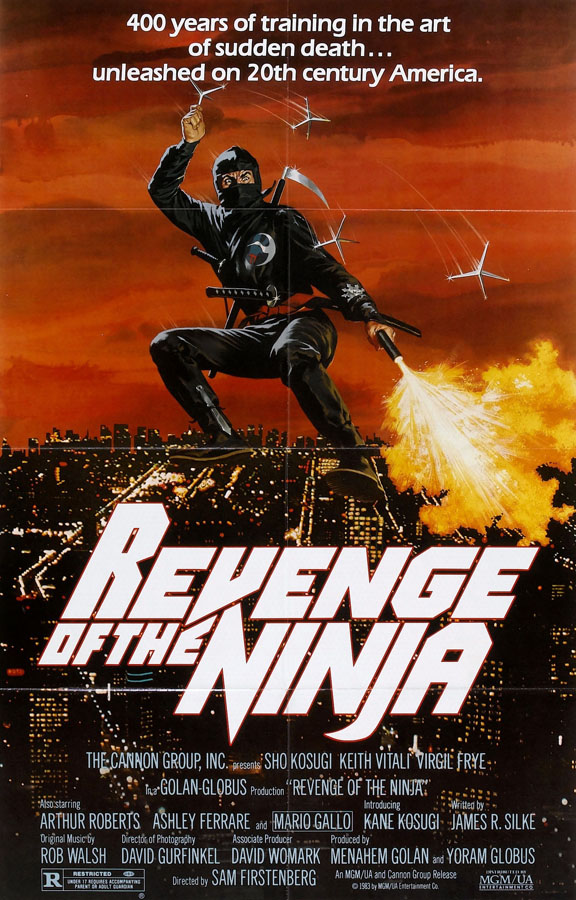 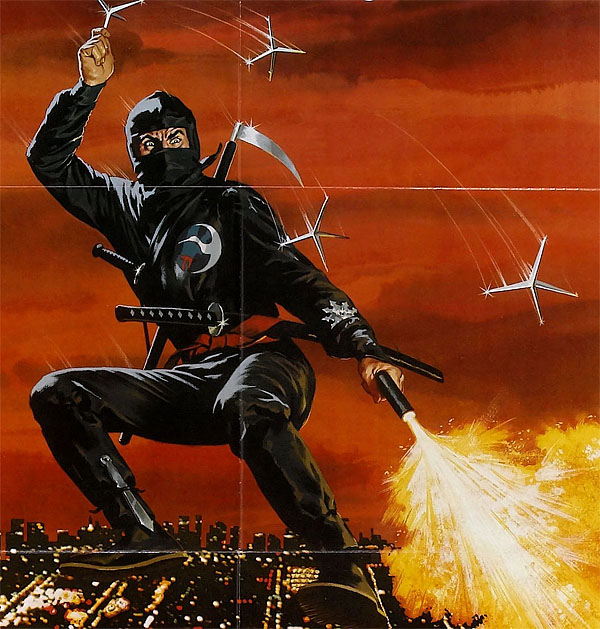 Ironically the painted art has little-to-no resemblance to Kosugi, but damn what composition! Back in the day, though, we were tortured by the the ‘inauthentic’ details like the Western military knife tucked into his tunic, and the Chinese ‘kung-fu shoes’ in place of tabi. The fact that this supposed invisible assassin in concealing night gear has a red belt, chrome-finish weapons strapped all over him, and a huge family crest akin to a superhero’s chest emblem telling the world who he is didn’t bother us at all though… Such was the logic of 80’s ninja fans.

The fact that the American key art wasn’t Kosugi outright may have led to some of the mysterious variants overseas, like the below Franch-language market poster. Perhaps they really wanted to feature the star? 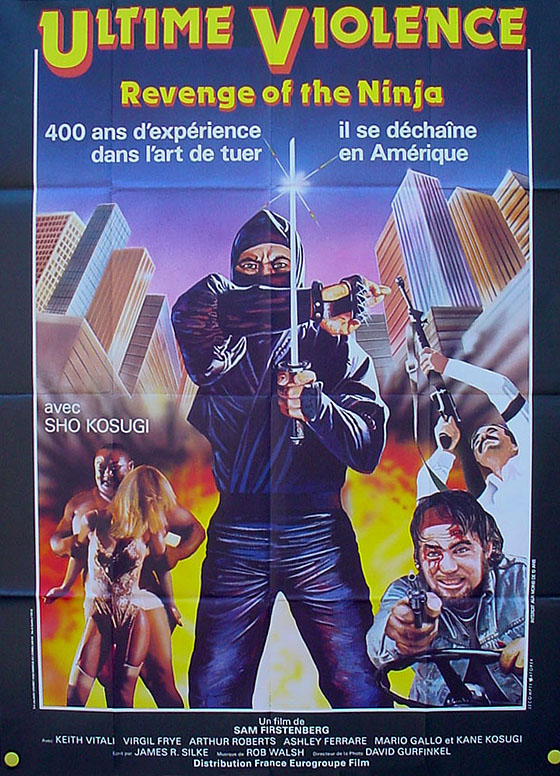 The above painting is based on the companion retail poster to the famous Kosugi Kick piece, seen below left. Why they didn’t use the original photo is anyone’s guess – couldn’t find the source, couldn’t meet on a price, didn;t even try…  Next to that is detail from the illustrated sleeve for the priced-to-sell VHS re-issue of Revenge, late 80’s-early 90’s. Even though there was a photo-based poster in the 80’s, used often in Europe, that same art didn’t make it to Spanish markets, evidenced by the painted version far right. All in all, there are remarkably few images used to promote this movie, but the versions of those few images are myriad.

Pray For Death was, for many, the last ‘good’ Kosugi entry in the craze era – a genuine piece of ninja-sploitation, surrounded by legends of ‘uncut’ gorier versions screened in dark corners of Europe and everything. While many thought Kosugi’s weapons and armor were downright silly, but it seems many (especially foreign ad men) thought it was pretty righteous: 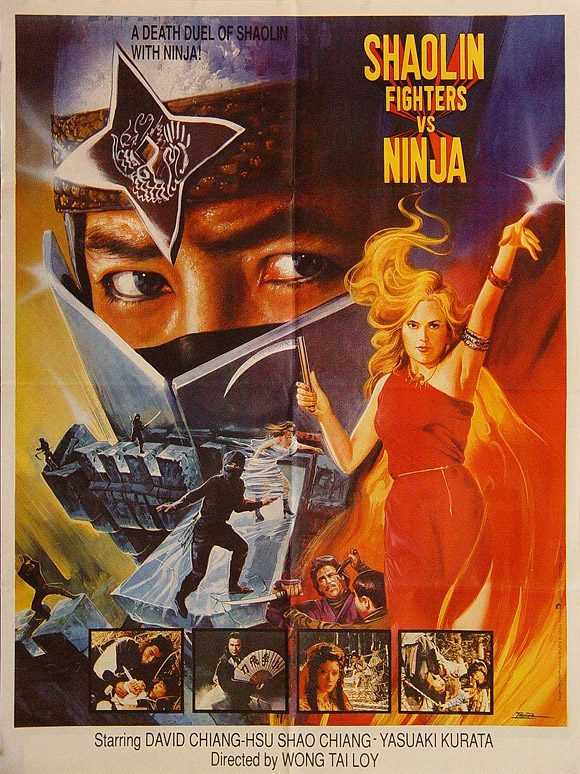 No, Kosugi was NOT in Shaolin Fighters vs. Ninja (or Ninja Against Shaolin, or Ninja vs. Shaolin Guards, or Shaolin Fights Ninja, or any of the dozens of other versions and re-titles of the concept that were out there), but you sure wouldn’t know it from the poster above. More painted art was done for the taxing 9 Deaths of the Ninja, and again the foreign markets were on their own page with the key art. I guess when your movie looks like this…

…you’re tempted to hide it behind more craze-palatable images of hooded ninja, even if it means evoking the competition – Michael Dudikoff! 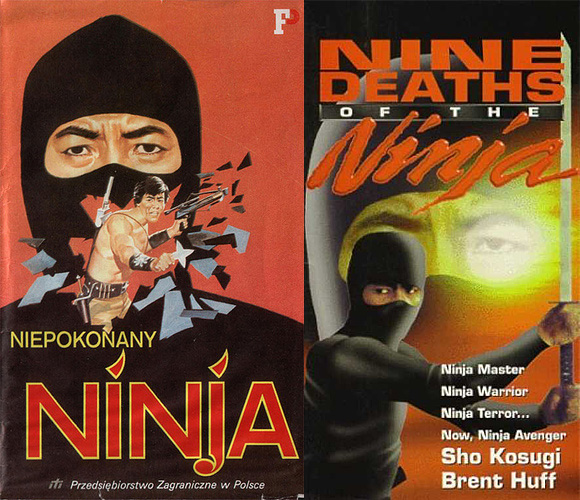 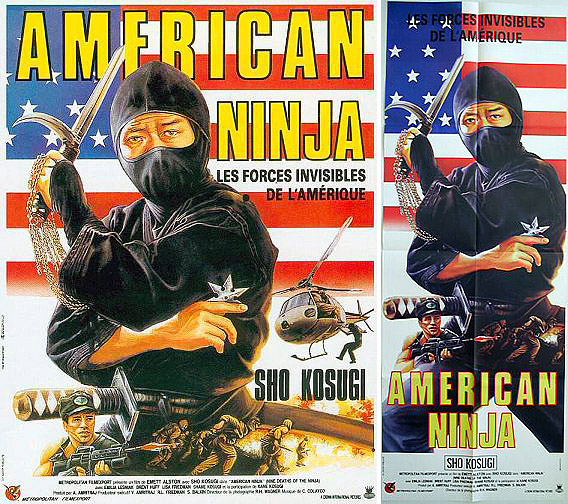 Strange to think of foreign ad artists toiling over these painted Sho Kosugi images, when in some neglected drawer at the offices of Inside Kung Fu, hundreds of amazing photos were sitting there, untapped. Exploitation films, however, have promotional resources akin to their low budgets. Campaigns turn around fast. There are language barriers between markets. Logistical and financial hurdles everywhere. So it ends up easier just to wing it and barf out some weird illo.

Chances are, the same box office take would have been made either way.

Sho Kosugi: The Ninja fansite, with tons of galleries, including mag covers and movie posters.

Really fun write up and video of 9 Deaths of the Ninja.

If you think these paintings are a bit off, check out the stuff from Ghana!