Well, it’s that time of year again, when, let’s face it… we buy a ton of gifts for ourselves because no one else understands our NEED for more ninja stuff!

So here’s some recommendations, all of which I own or have on order myself, so I can personally attest to all the below…

Currently in the mail heading my way are two books with deeply rooted love for the 80s ninja boom, and I encourage you all to support these indie projects. They’re both sequels, of sorts, to films we adore. 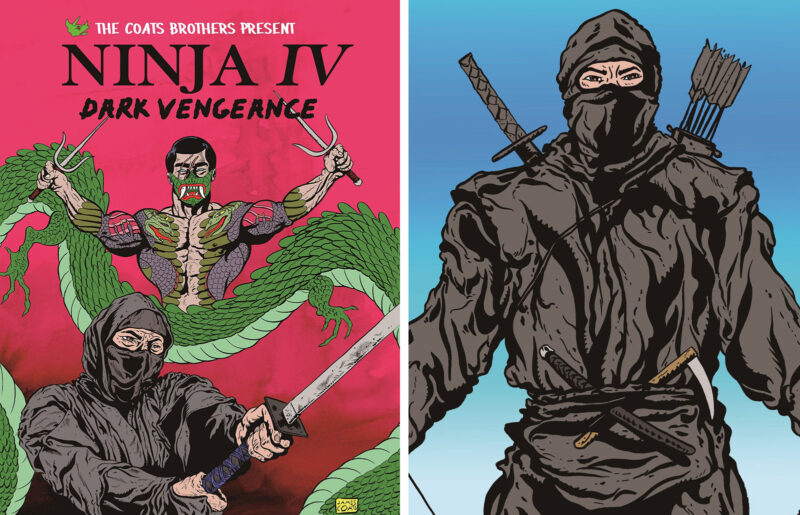 Assuming the role of producers of the fourth Cannon/Kosugi flick we never got, brothers John and James Coats have created a 58 page homage to the classic ninja trilogy. Ninja IV: Dark Vengeance seems mostly Cannon-inspired in its DNA, with some choice nods to the IFD/Filmmark Godfrey Ho/Tommy Tang stuff for additional flavor. And it’s bloody and violent as hell! Cannot wait to read this… 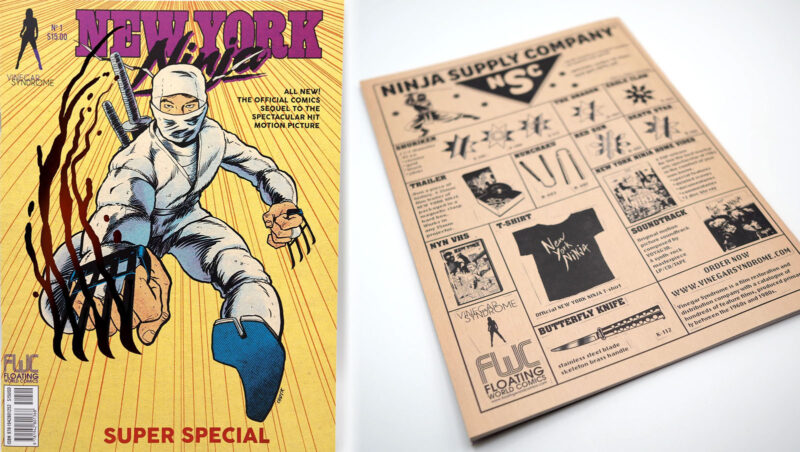 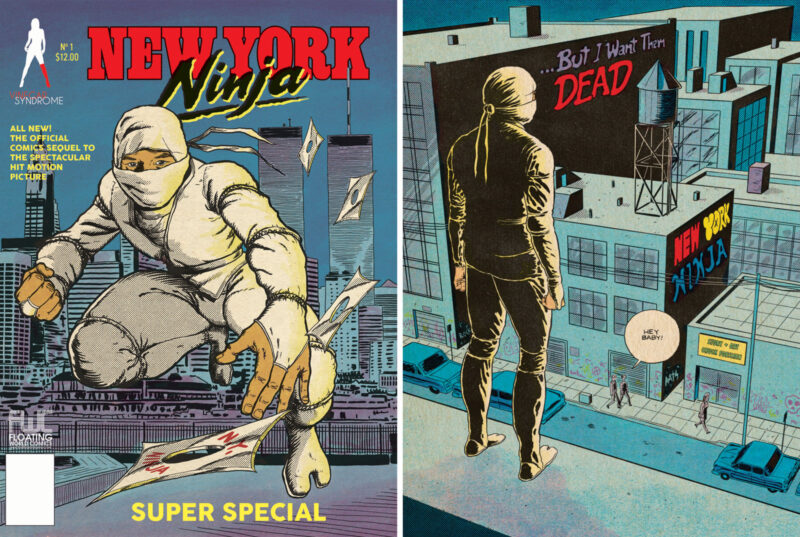 In a similar vein for sure is this pulp follow-up to the amazing New York Ninja from Floating World Comics and Vinegar Syndrome.

Charles Forsman is the writer artist of this magazine-sized super special, complete with fake mail order ads and everything. Dying to get my hands on this…

There are two versions of this concurrently available, one from the video label with exclusive red foil on the cover and one from the comic studio itself with different cover art:

Buy from Vinegar Syndrome and shop for discs here.

I’ve recommended the props of Jason Blakely in the past, and his new stuff this year is better than ever! 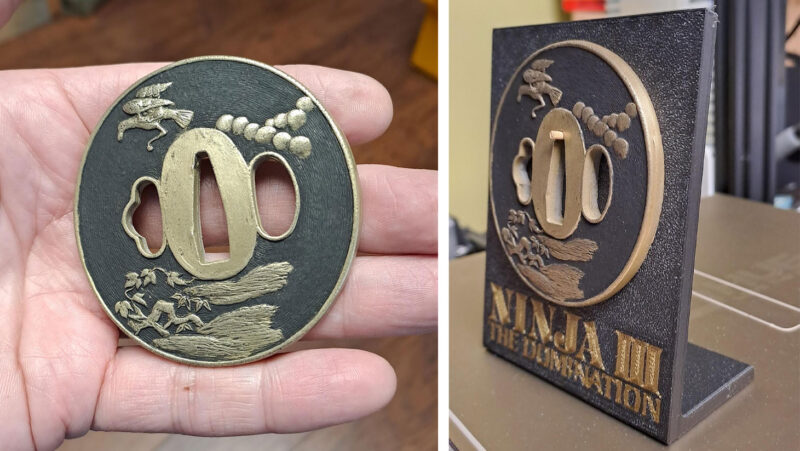 Straight from Sho Kosugi’s missing eye socket in Ninja III: The Domination and straight to your desk or cosplay closet is this 1:1-scale (aka life-sized) replica tsuba eyepatch, crafted in a variety of metals and finishes depending on how much you want to spend. He also has butterfly pendants from The Master and the clan medallion from Revenge of the Ninja available.

or email Jason and ask about the customs stand —  jblakey@gmail.com

If you’re an old school wrestling fan, particularly 1980s WCCW, then The Great Kabuki‘s image is as burned into your mind as it is mine. Sadly, there’s very little merchandise out there representing the rasslin’ ninja icon. This new 6″ vinyl figure — 16d Soft Vinyl Collection 022 Legend Masters The Great Kabuki — is a deformed portrait of him in his latter career after returning to Japan. Various importers have them on eBay ranging from $60-150 depending on the paint variant. Love that scowl… 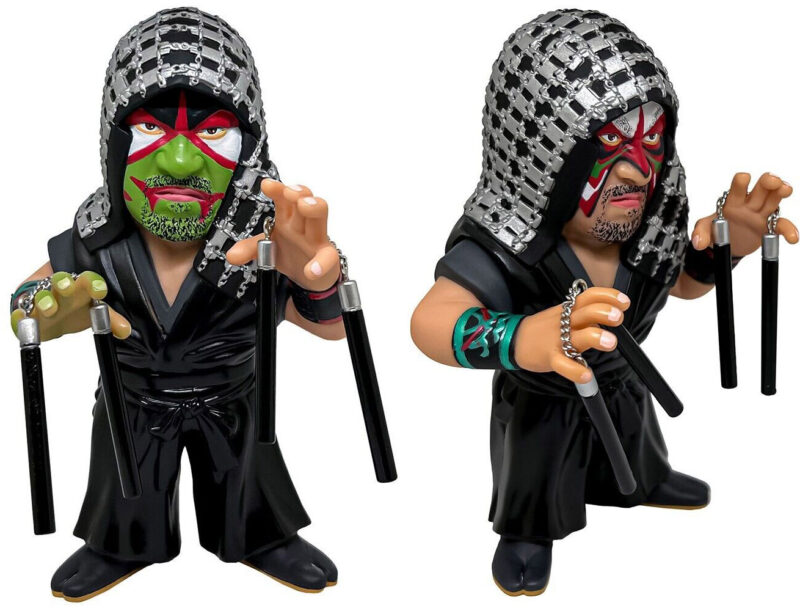 While we’re on the subject of expensive imports, 6inch+ and VToys recently unleashed these three Shadow Ninja on the high-end collector market. 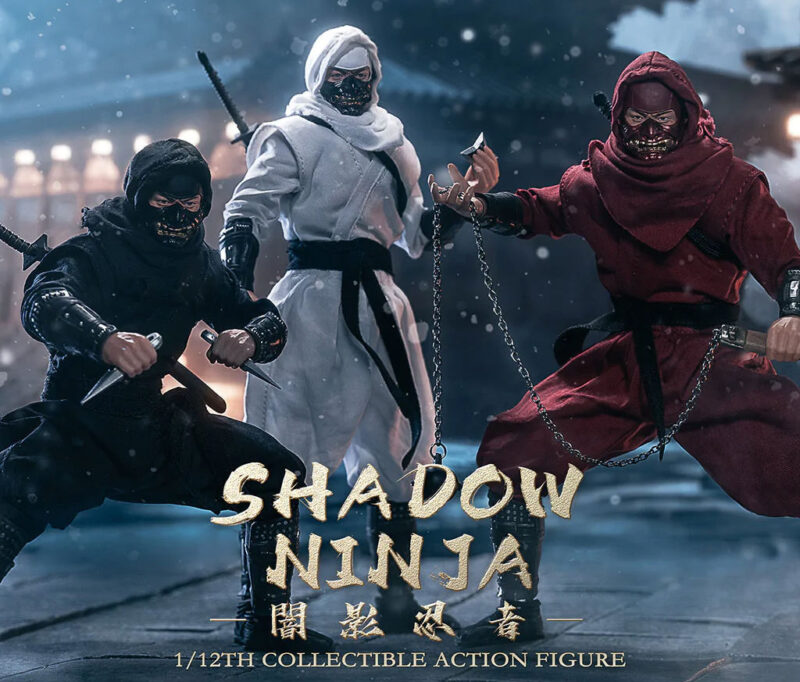 I love love love the 1:12 figure scale, which is currently dominating the adult collector field. BUT… I hate hate hate cloth goods on six inch figures. The stitching and hems are always out of scale, the cloth bunching up restricts movement and posing. All the problems of the 12″ figure realm, but typically 200% worse. 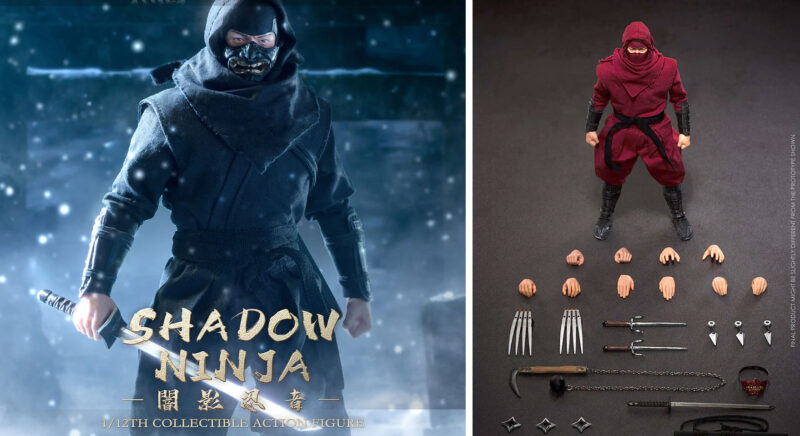 The base figure here feels pretty solid and is definitely very articulated. The cloth outfit has very thin material which is better crafted than most other stuff out there, but I can’t see a way to remove it without doing permanent damage and I have no clue what’s molded underneath. Could be a sculpted clothed body, a naked body, or just be end-skeleton and joints. I’m not really willing to damage the outfit to find out…

The accessories are excellent, particularly the kusari-gama and the mempo mask. Extra hands include pairs specifically sculpted to hold kunai and shuriken, too, which is a huge bonus.

So I’m sort of torn on these… I’ve seen collectors raving online and others complaining. The $75 price tag is steep to say the least, but the execution is excellent, and these are imports after all. Your mileage will vary depending on how you feel about soft goods on smaller scale figures, but there’s no arguing they look great.

I highly recommend U.S. retailer 5KToys for these, and they’re 100% reliable. 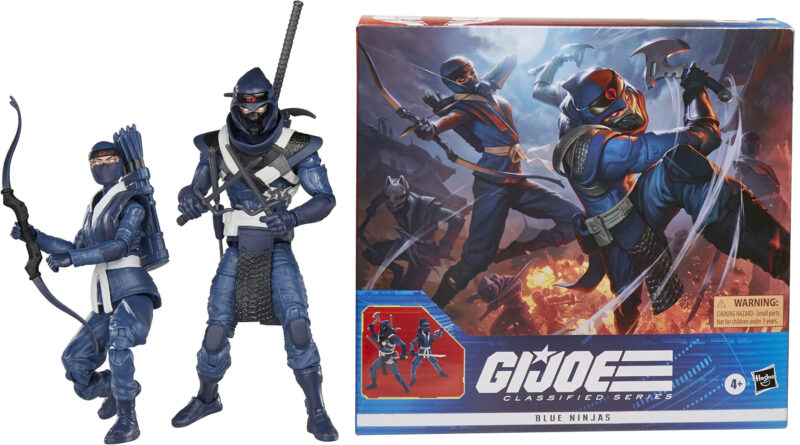 When the new 1:12 GI Joe Classified line introduced their requisite red ninja last year, and I didn’t even realize it because the photos of this armored space cyber alien-ish character armed with alpine climbing pikes amongst other swap-meet/smoke-shop weaponry didn’t even read as a ninja to me. That’s a Hasbro tradition going back to the late 80s, you actually need to be told a lot of their ninja characters are intended to be ninja. However, for this Amazon exclusive Blue Ninjas two-pack they swapped out the red hues for blues, adjusted the hooded head to actually include some flesh and eyes, and suddenly he’s a whole lot more on point. His partner is a female assassin composed of a new hooded head on a blue-molded re-use of the Akiko figure from the Snake Eyes movie, and it’s a totally successful subterfuge. I disliked, even despised, both of these figures in their original form, but now with a new blue scheme (that harkens back to America’s first ever ninja figure Savitar of Eagle Force) and some additional bells and whistles… well, gotta admit, this set might be the most successful re-colored re-use in ninja action figure history.

My general complaint on all modern Hasbro ninja figures is the toy designers don’t use enough historical illustrations or vintage Japanese media as reference material, instead going to current mail order catalogs and martial arts gear websites as gospel. So we get characters with Highlander swords and those knock-off “tactical” blades that flood in from China. Are we to believe the Arashikage ninja outfit themselves at the local dirt mall, the BudK catalog, or shady booth in the Chinatown market next to disease-ridden discount pet turtles?

I don’t know… maybe some of you all like that crap in action figure scale. I myself don’t, but however you feel, the set has lots of weapons good and bad, and two all-new alternate masked head sculpts that are legit great. They make this set totally worth it, especially if you can catch it on discount.

Keep an eye on the price of this Amazon two-pack here. 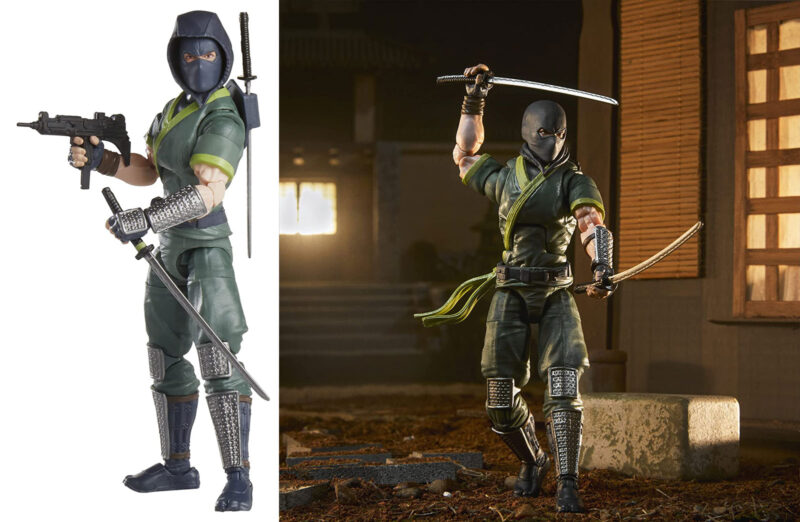 Another new GI-Ninja exclusive to Amazon is Kamakura. Again, plenty of reused stuff and accessories, but the new color palate of the costume and totally original gun-metal colored arm and shin guards are beautiful stuff. The optional outer-hood is pretty silly in how oversized it is and how far off the noggin it sits, giving him a total egg head. This release is categorized as “deluxe” but hardly merits that distinction or elevated price — there’s lots of non-ninja goods like pistols and hunting knives from other figures, an unmasked head none of us will ever display, but little else new. Another one to grab if on sale but to be honest I have buyers remorse having pre-ordered this at full retail way back…

Decide for yourself here.

So what all else is out there you’re spending your self-gifting dollars on? I love supporting indie projects in particular so send me suggestions and links anytime!