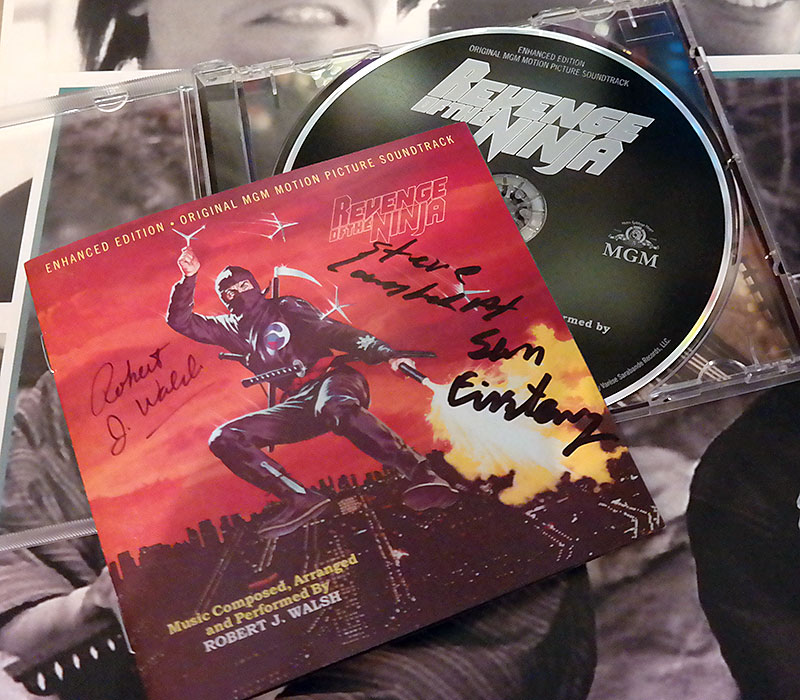 If you weren’t able to make the Revenge of the Ninja CD signing event in Januar,y the score and exclusive event print are now available via mail order, all signed by ROTN director Sam Firstenberg, stunt coordinator and silver-masked ninja double Steven Lambert, and composer Robert J. Walsh (CDs only). 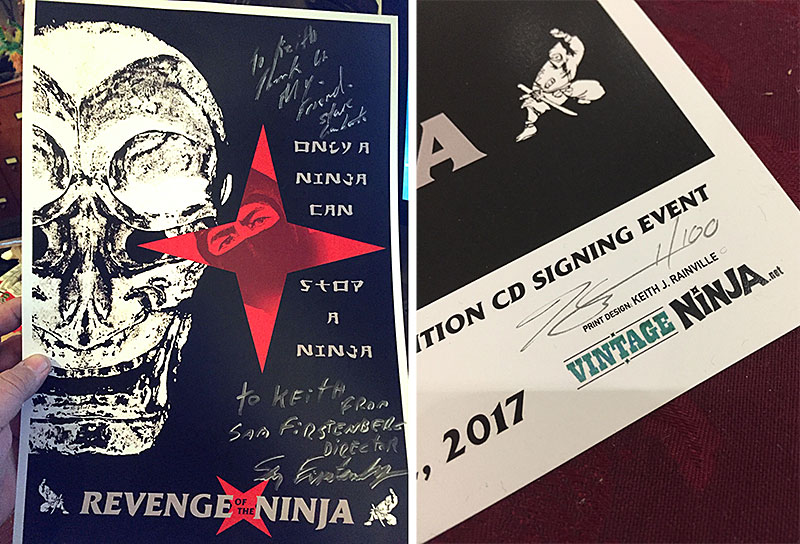 The newly remastered ROTN soundtrack is just great — the sound is noticeably improved from the vinyl, there are extensive liner notes and a photo-loaded insert, and newly added are 12 classic tracks re-instrumentalized and enhanced by Walsh himself. Highly recommended!

The prints are 11×17″ on heavy stock, only 100 were printed and of those only a few were signed by Firstenberg and Lambert (in silver ink), so it’s first-come-first-served on those.

As for the event itself, it was a day of amazing stories from two men who genuinely adore this film and love even more its enduring fan following. The absolutely gushed eye-opening accounts of the production and working for Cannon Films back in the day. If you’ve heard their commentary on the ROTN or Ninja III: The Domination Blu-rays imagine the same sort of thing but in a live, intimate gallery setting. 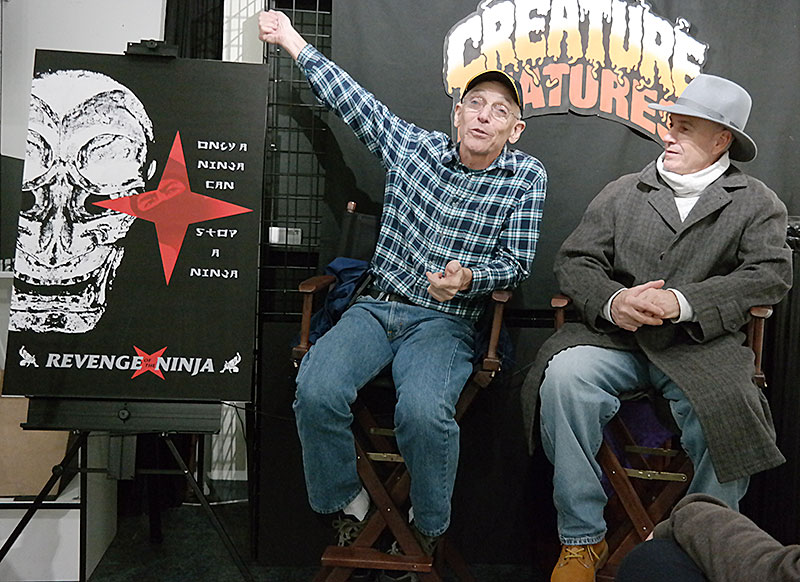 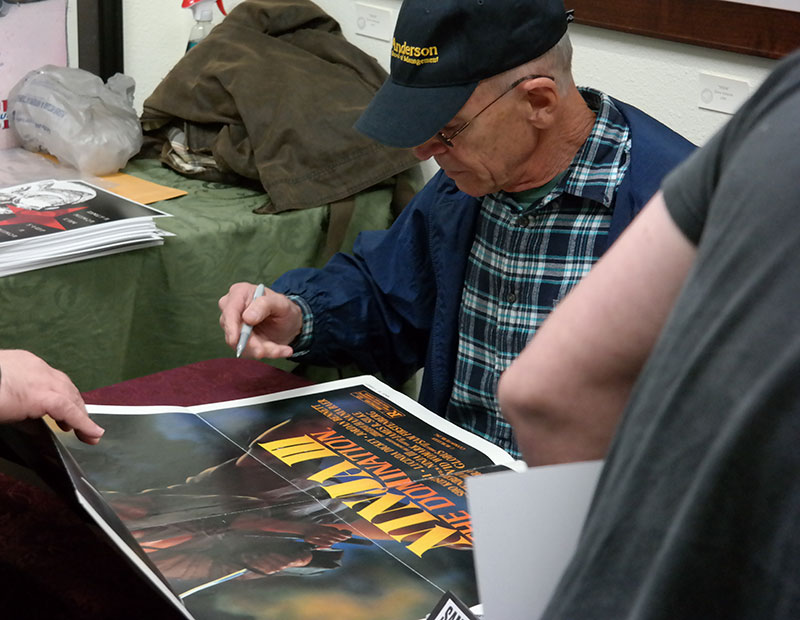 Some gems we heard from Firstenberg:

— He largely fibbed his way into directing what would be his first action movie, and that inexperience led to the unique collaborative nature of the film. Sho Kosugi had huge sway, (Firstenberg called him “the leader” of the picture in a lot of ways) being close to producer-level and involved in more aspects of production than a first-time leading man would typically enjoy. Lambert, also a first timer on ROTN, was afforded freedoms he’d never enjoy again in bigger studio efforts. This collaborative triumvirate captured lightning in a bottle.

— Robert Walsh composed the entire iconic score in a mind-boggling FOUR DAYS. He put in marathon sessions with his own and borrowed equipment. Although most composers would start on the synth level in putting a score together hoping the studio would spring for proper orchestration later, on a Cannon budget Walsh knew from minute one a symphony was NOT going to happen, so ROTN was a synth score from concept to finish.

—  It was often a tri-lingual set. Kosugi would talk Japanese with his inner circle of students and his family, Firstenberg and his team would often meet and converse in Israeli, with most everyone else stuck in between trying to decipher everything to English.

— He’s getting more interest in his old ninja films now than he ever did before. The weekend of the event he had also done a phoner with media in Manitoba, Canada and has fielded invites from all over the globe in recent months. 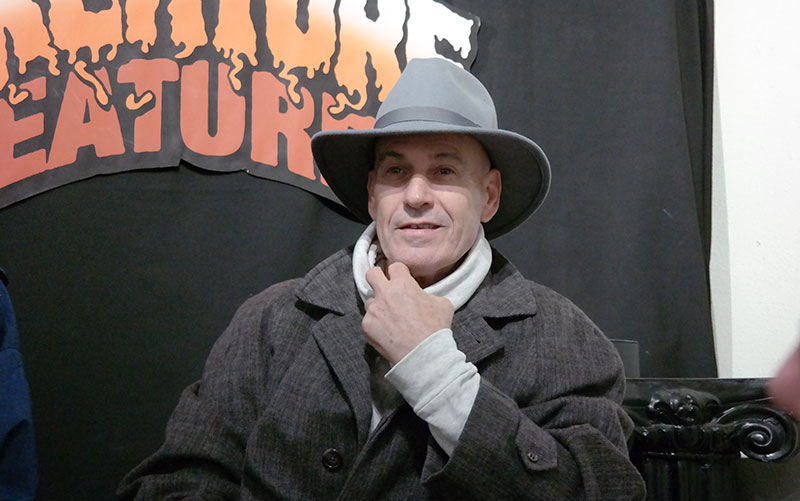 And even more gems from Lambert:

— Even though studio armorers were credited, Sho Kosugi actually provided the entirety of the exotic ninja arsenal himself, and would continuously replenish items from the local martial arts training equipment manufacturers and suppliers he was already in business with creating his branded mail-order ninja gear. Lambert in particular marveled at how industrious, aware and calculated Kosugi was with the opportunity that was in front of him. He knew it was the right time and right place and was user-ready to pounce on the craze once it congealed.

— Watch the end duel closely and you’ll see Kosugi disarm Lambert (doubling Braden) of this sheath. When he tossed that sheath during the arcing sword-parry, it flew far enough away to go off the side of the sky-scraper they were on and fell all the way down to earth, amazingly not hitting anyone below.

— At some point in the late 1990s, thieves broke in to a storage unit rented by Lambert and cleaned it out. Amongst the treasures from his career lost were the ninja suits he wore in ROTN, Ninja III and American Ninja and two of the three silver Braden masks.

— The house and gardens used for the Osaki family massacre at the film’s beginning was rented from… get this… SHIRLEY TEMPLE! 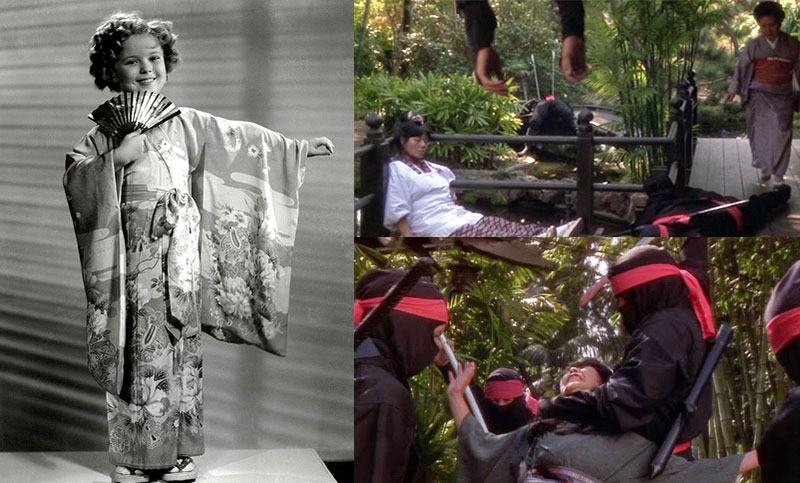 35 years ago, I watched my SLP-recorded VHS tape of HBO’s airing of Revenge of the Ninja (if memory serves that same tape had The Road Warrior and They Call Me Bruce on it) so much it wore thin and snapped. To say that movie stuck with me would be an understatement. Decades later, to have an art gallery borrow some of my collection for display and ask me to design a print for an event where I’d kibitz with the men who made that movie was… well, the ultimate payoff to a life of fandom (never mind some serious validation of my pro-nerd status).

Jump at any rare chance you get to experience these men in person, their generosity with the material we know and love so well will blow you away the same it did me. 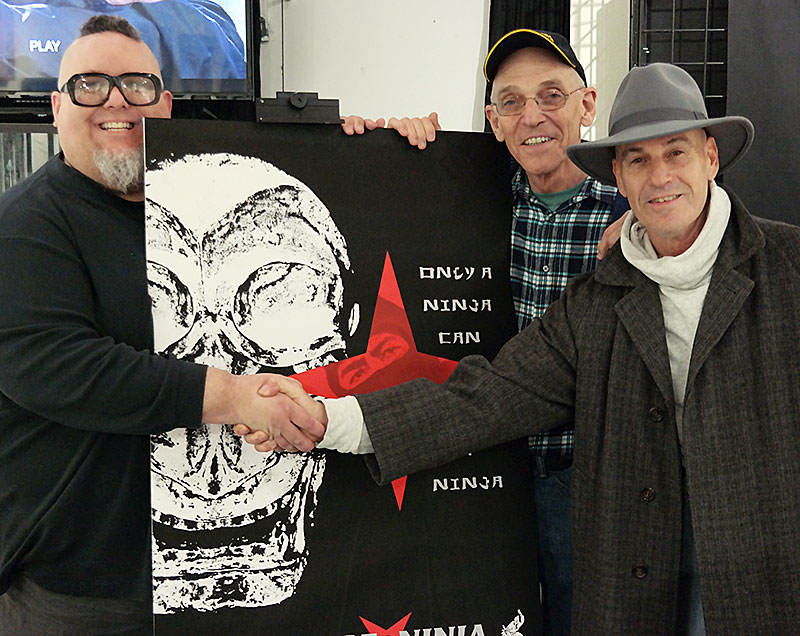