The first cinema-based ‘Ninja Craze’ in Japan is pretty well defined by the decade in which it took place – the 1960s. Yes, there were enormously popular manga, highly rated anime on TV, and martial arts practitioners bringing codified shadow skills to the public for the first time. But nothing has the cementing property that cinema does. Conquering the silver screen is conquering culture. It’s the big league of any media trend, and sustained cinema success is what turns a fad into a movement and hits into history.

Black and white ninja movies from the early to mid 1960’s are a niche within a niche, pretty much within a cross cultural niche altogether. But obscure? Hell no. This genre explosion was akin to Spaghetti Westerns or 80’s slasher flicks; a concise representation of a major money making movement that superbly reflected it’s time.

Here then are nine (being the essential number of ninjutsu) must-see flicks that thanks to the modern information era (and some fan-based yo-ho-ho) are now widely available and looking better than ever… with English subtitles. There’s never, NEVER, been a better time to be a ninja movie fan, and here’s some you NEED to hunt down:

I hesitate to rest on crutches like “genre defining” or even “the Citizen Kane of shinobi cinema,” but man are both of those statements true of this franchise-launching monster. Ninja movies had been made since the silent era, black suits and throwing stars weren’t invented here or anything. But there were spy films made before Dr. No, too. Satsuo Yamamoto‘s Shinobi-no-Mono is the ninja Dr. No, and Raizo Ichikawa would be the boom’s Sean Connery.

With genuine ninjutsu masters on set serving like military advisors for a war movie, this is the film that established credible shadow skills on screen. Gone were the magical wizard antics of 50’s ninja films. Spy gadgets, commando tactics, exotic sword skills and weird weapons would hence be the norm, as would striking use of shadows and light. Shinobi chiaroscuro was here, and EIGHT sequels would follow. (See movie posters here.)

Blammo! The craze was off and running, and every kid and cubicle-caged office worker in Japan wanted to be a heroic black clad martial arts super spy. Then along comes a flick like Yatsuo Hasegawa‘s star-studded Seventeen Ninja, which is one of the best examples of the ‘ninja as disposable espionage asset’ theme explored again and again throughout the decade. Slavishly devoted to serving in the shadows, the ninja life pretty much sucked and you were dead meat at the drop of a dime.

Seventeen is a blood-soaked game of human chess between a guilt-ridden spy master (Ryutaro Otomo) and a vicious anti-ninja expert (Jushiro Konoe). It’s all about attrition as life after life is sacrificed. As the bodies pile up, it all comes down to one final emotionally conflicted ninja (Satomi Kotaro) and a simple but risky deception.

A superb example of pop culture and marketability changing the course of a film. Three friendly rivals to fortune and females get caught up in a plot to smuggle guns for the government, with ruthless pirates and an aggressive ninja clan running interference all the way. Okamoto Kihachi‘s comedic actioner doesn’t necessarily need the shadow set, but somewhere along the way this samurai story picked up all sorts of steam when the black hoods were turkey-bastered into the plot. There may not be a more likable and engaging cast of three male leads in a film outside of Three Outlaw Samurai. Absolutely great!  (More on this film here.) 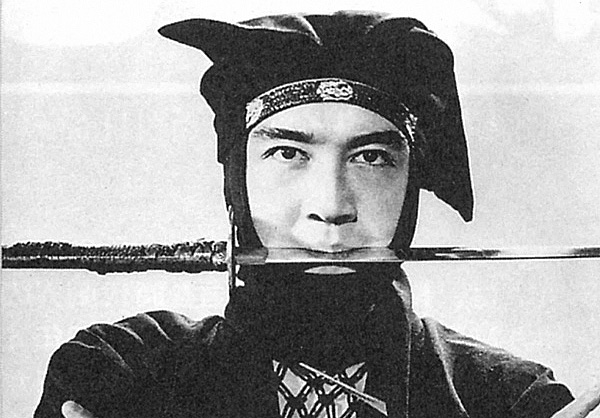 Damn, ’63 was a good year! I had to include at least one kid’s film in the list, and this live-action adaptation of the first multi-media mega property of the ninja boom can be enjoyed by anyone of any age. A plucky young ninja (an early role for genre legend Hiroki Matsukata) fends off a small army of weirdly mutated and super-powered villains in Noboru Ono‘s simple but charming adventure. (See merch and images here.)

A clan is doomed, ninja are the problem, and expendable mercs are hired in a desperate gamble for survival. Enter Wadakuro, a down-and-out ronin played with Deniro-like ferocity by the legendary Jushiro Konoe. Is he fighting for the clan’s protection, or his own vengeful obsession to slaughter everyone in a black hood? And will anyone survive the bloodletting that unfolds?

Jaw-droppingly brutal, Tetsuya Yamaguchi‘s film explores serious emotional depths as a man hired to fight shadows devolves into an even darker creature himself.

At the time of this and Seventeen Ninja, Konoe was also starring in a prolific series called Yagyu Bugeicho (Yagyu Chronicles or Yagyu Secret Scrolls). The eighth entry, Katame no Ninja (aka The One-Eyed Ninja) sees Konoe’s version of Jubei Yagyu lead an army of 64 shinobi swordsmen against an impenatrable fortress in one of the few battle-based ninja flicks ever made. This one is also highly recommended, and just missed this list. (More on this film here.) 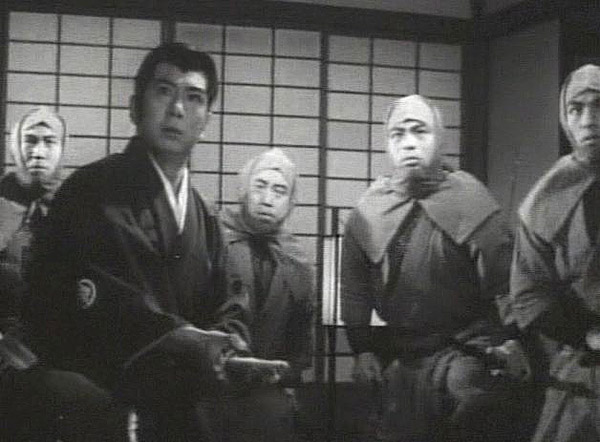 Had to include this for its historical value outside of Japan. Koichi Ose‘s television hero “Shintaro the Samurai” was the first international export of the ninja boom, and caused a sensation in Australia. Generations of Aussie kids grew up on this ninja-infused small-screen serial, and the cast’s live appearances on promo tours down under drew bigger crowds than The Beatles. Detective Fencer is a theatrical chapter of The Samurai, with a dizzying array of gimmicky ninja and Shintaro’s “Tonto”-like sidekick Tonbei the Mist, played by one of Japan’s most popular ninja actors Maki Fuyukichi. (More on The Samurai and Tonbei here.)

Takeda Shingen unleashes the greatest ninja assassin ever, and it’s up to three lesser-skilled but highly motivated rival shinobi to stop him. Kouno Toshikazu‘s stylish pic is just a superb and well rounded genre entry; great innovative action photography, haunting harmonica-accented score, espionage arsenals vs. anti-ninja booby traps, etc. And Satomi Kotaro‘s conflicted hero is the poster child for the often-explored ‘how do I get out of this doomed life of a ninja and bang this hot chick’ theme. (More on this film here.)

Masahiro Shinoda‘s masterpiece is, hands down, the artistic apex of the ninja genre. Hell, it’s above the ninja genre, and possibly jidai-geki as a whole. The tale of a beleaguered Sasuke (Koji Takahashi) trying to stay uninvolved in feudal conflicts, but always being sucked into swordplay and shadow-play alike, there’s just no other ninja film like this. From the woozy jazz-laced score to the unconventional fight scenes, Shinoda spat in the face of genre conventions with unparalleled cinematography and a very human story that is barely contained in the trappings of shinobi cinema. This is art here, to the tune of Criterion DVD special edition level. Just wow… (We did a four part breakdown of the visuals in this film starting here.)

The Shinobi-no-Mono series was so successful, it spawned seven sequels in which Raizo Ichikawa played three different lead characters. After his untimely death in 1969 (at only 37, why he’s called Japan’s James Dean), Daiei Studios dipped into the well one more time, making the best 60’s B&W ninja movie ever seen in the otherwise color-dominated year of 1970.

The boom was over, the look and tone were outdated, the choice to market this flick under the beloved Shinobi-no-Mono banner questionable… But damn is this an f’n great movie!

Issei Mori directs Hiroki Matsukata as the reluctant leader of a small band of spies charged with kidnapping a noblewoman from a heavily ninja-proofed castle. Things do not go as planned in what is possibly the darkest and most fatalistic of the already noir-ish 60’s fare. Both the decade and it’s distinctive style of shinobi cinema went out on a high note with Mission Iron Castle. (See the ladies of this film here.)

So what is that, 18, 20 hours of gorgeous black-and-white shadow cinema for you to start on?

There are, of course, lush color films from the same era; The Red Shadow (Akai Kageboshi), Castle of Owls (Ninja Hicho Fukuro no Shiro) and Warrior of the Wind (Kaze no Bushi) making the short list, with Owls being arguably the best ninja movie ever made.

However it is the black and white poetry of hooded espionage like in the films above that really define the 60’s ninja boom.