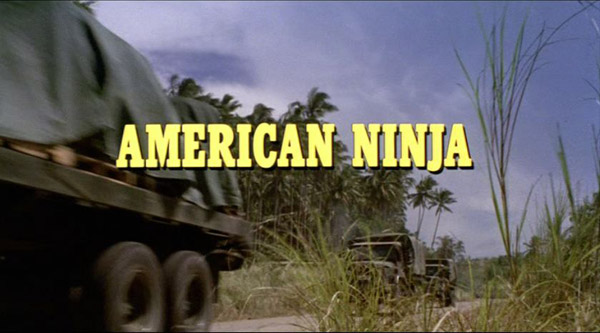 25 years ago this weekend, Tim March, my brother Seth and I were dropped off at a theater in Worcester, Massachusetts for an afternoon matinee of American Ninja. The ‘craze’ was actually in the process of ‘jumping the shark,’ Tim and I were getting jobs or landing girlfriends, finding better stuff to spend money on than Black Belt magazines. It was starting to get kind of embarrassing to be caught running around the woods with homemade nunchucks. It just wasn’t the early 80’s anymore.

Time to grow up? F-that! We were there with bells on. Why? Because we were DEDICATED! (translated: DORKS)

The lights go down, popcorn being devoured, 80’s synth score blaring. Ninja on the big screen!

During the initial fight (and the fact that black suits and swords were on screen in the first five minutes is a testament to the smarts of Sam Firstenberg), there was a bit where two ninja tie-up a GI with chain in a niftily executed piece of what the Japanese call Hojōjutsu. 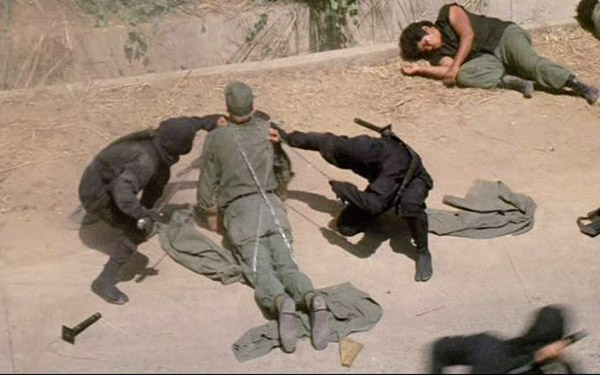 Tim leaned over to me and whispered “Holy shit! This is real!!!” and for a minute we thought a more realistic and credible ninja flick was upon us.

90 minutes of multi-colored ninja on monkey bars and wrist-mounted laser guns later… not so much.

A little red-in-the-face over the seemingly inevitable goofiness the American genre clung to, we exited the theater kinda knowing it just wasn’t going to get any better from then on. So, like proper blindly loyal geeks unwilling to blaspheme the cause, we panned for gold and found a lot to love in American Ninja. Quarter century of perspective later, some of it actually holds up.

It starts with Mike Stone. 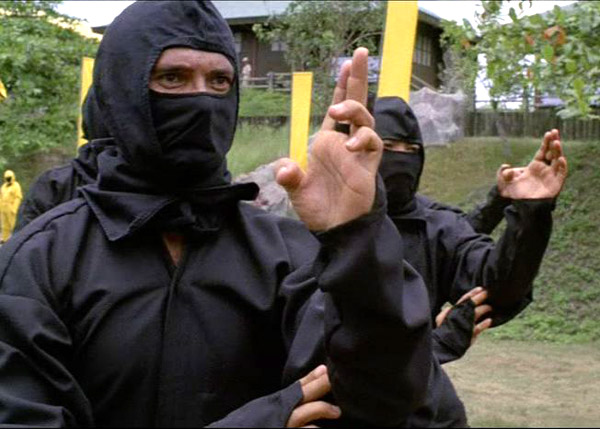 The unsung hero of the American craze, Stone actually left the ninja business behind after his pioneering work on Enter the Ninja. American was his return to the hood, albeit behind-the-scenes and/or doubling for various ninja cannon fodder. 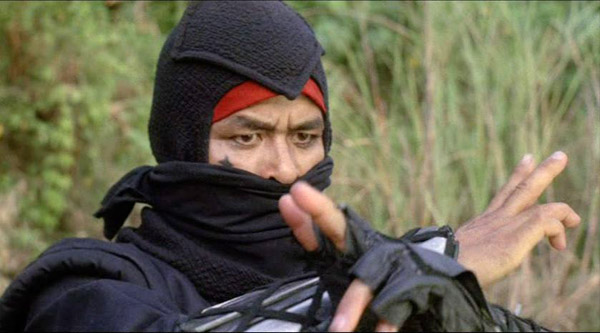 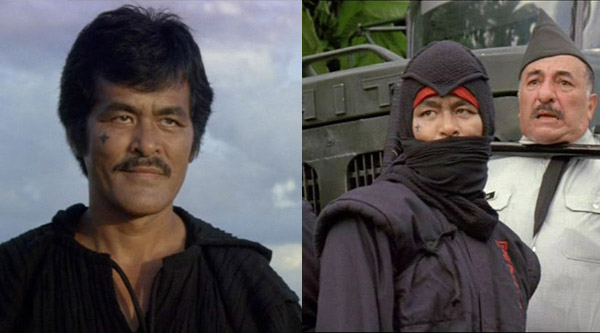 Never mind all the fights, Black Star’s wacking of a padlock with twin swinging kamas is one of the coolest ninja scenes ever! He’s totally bad ass, and carries the movie single-handedly. But then,  aw shit…

The selective memory FAILS and you remember the fucking machine guns and lasers he resorts to using. LASERS?!?! God, if one single moment, one brief second of celluloid, was the moment the ninja craze was injected with a smelly, cheesy poison that slowly killed it for the next five years, the laser shot was IT. 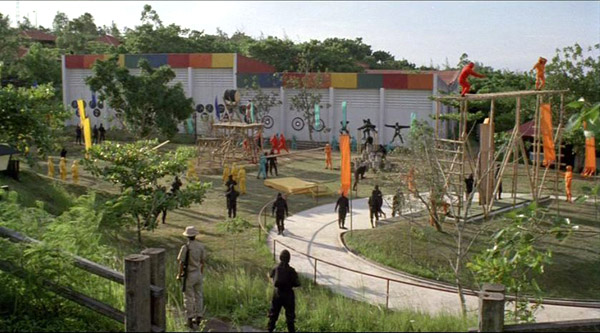 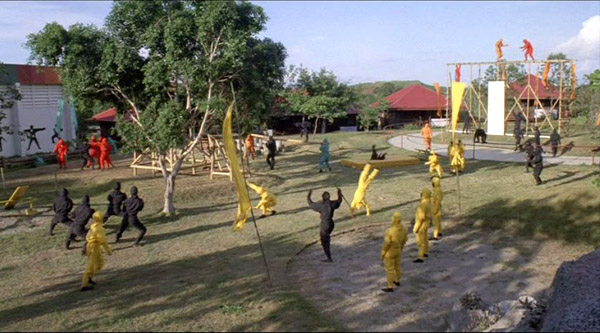 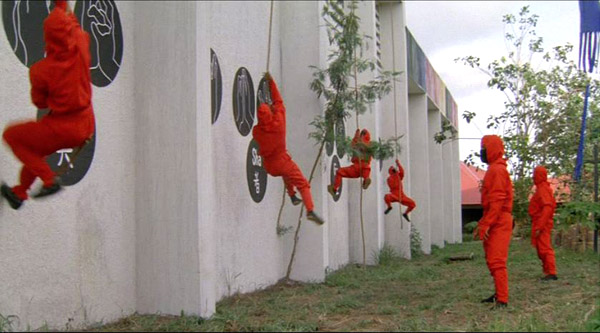 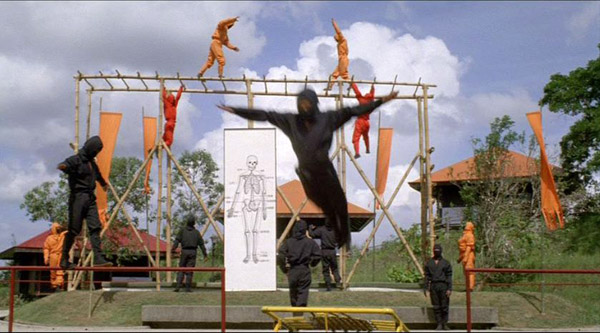 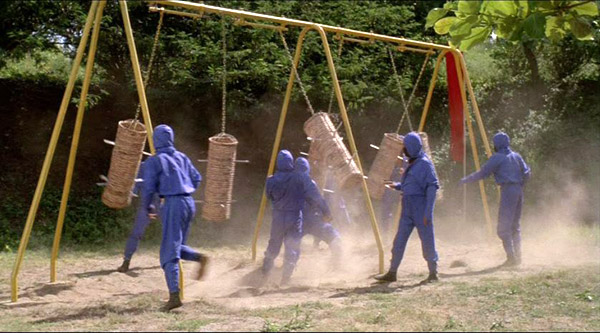 Do I even need to rant here?

The ‘Ninja Land’ training compound shit just killed us. When Ninja III: The Domination was released in 1984, Tim and I dragged our posse of high-school friends to it, and my rather anti-ninjite friend Patty coined the term “Caca-Ninja-Movie” with which she tormented us for years. A year later, when the colored ninja gymnastics show started here, there was Patty’s voice in my damned head chanting “Caca-Ninja! Caca-Ninja!” and for fuck’s sake she was RIGHT!

But then… at the end… is this pretty damn good ninja battle with a huge body count, and Mike Stone doubes for John Fujioka as a whirlwind of black and red death. And Steve James goes all Ram-Bro with an M-60 machine gun then punches a big Bolo-looking dude in the junk, and its all awesome again. 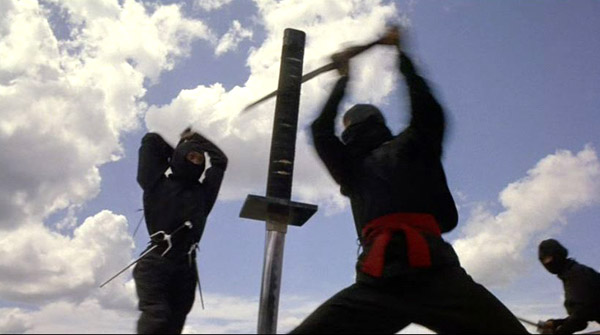 But then again… Dudikoff breaks a bow and arrow over his knee for no reason and they blow up a cheap model helicopter and Judie Aronson never gets topless. DAMN YOU AMERICAN NINJA! I try to love you and treat me like shit, even in front of my friends! My mom warned me about you, why didn’t I listen? I swear to god if you don’t stop drinking I’m moving out of this trailer.

All right,  all right. Enough bi-polar projecting. Let’s look at American Ninja for what it really was – a franchise reboot that from a studio perspective actually worked. You’re Cannon and you have a great thing going with Kosugi, but he wants more control and bolts. You’ve got more projects lined up, you know anything ninja is BANK right now, so what do you do? Find another star.

The star is unproven though, so you cheapen the production to risk less money, and to cast a net over a wider audience you take out the gore and boobs and silly it up a bit to make things kid-friendly and foreign market compatible. And what do you get for your efforts? A modest hit and a four-sequel franchise that lasts into the early 90’s on home video. THAT is successful business.

We’ll continue this celebration in the following days with a quick look at some pre-production strangeness and Matt Wallace returns to talk sequels.

In the meantime, you can pick up all the glorious Dudikoffness on DVD right in our Amazon store here. 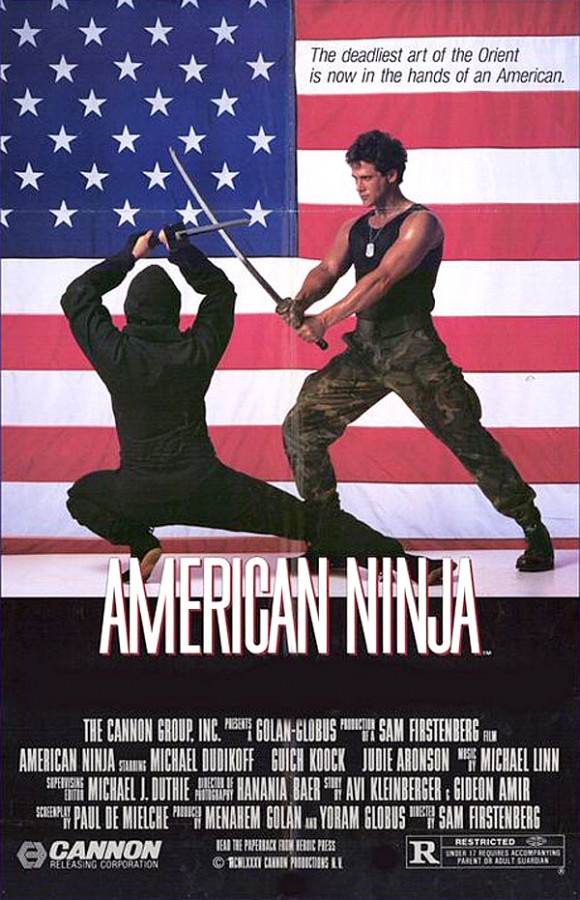