They’ll call you the lesser American Ninja. They’ll say you weren’t even a replacement as much as you were a placeholder, a mask-filler brought in while Michael Dudikoff was auditioning for soap opera guest spots. They’ll say you didn’t take over the franchise after Dudikoff foiled the evil Super Ninja eugenics program in AN2 (aptly and hilariously subtitled The Confrontation); you were just keeping it warm for him.

I’m here to tell you something, David: BALLS TO THAT.

You need to take some personal inventory, son. Michael Dudikoff only made it as far as the Army Rangers. You were a top operative in the CIA. You facilitated Steve James’ rise from Dudikoff’s uniform-clad straight man sidekick to the bandana-wearing, double Chinese broadsword-wielding Afro Ninja he became when you stepped into the tabi boots as Sean Davidson, American Ninja 2.0. And lest we forget, on the Swayze Scale of 80’s-early 90’s action hero hair yours was Swayzier than Dudikoff’s by a factor of at least five.

Did Dudikoff battle the villains you did? Did he lead the Blood Hunt (a.k.a. American Ninja III) in his debut? Did he track down a cure after a feared international terrorist known only as “The Cobra” and played by former child evangelist and quasi-pop star Marjoe Gortner infected him with a deadly virus? In the process did he defeat said Cobra’s legion of clones, including the franchise’s sole hot female ninja assassin?

Now the hard part. They’ll say Dudikoff had to come save your ass (and the ass of your couldn’t-hold-Steve-James’-jock replacement black sidekick) in the fourth installment, a.k.a. The Annihilation. Fuck that. I choose to believe you simply had too much integrity and respect for the franchise to participate in that inexplicable second act Road Warrior-esque gangfight sequence for which they brought Dudikoff back. And you still gave us the third best “lone warrior constructing a tactical bow and arrow” scene in cinematic history, following only Arnold in Predator and Sly in Rambo: First Blood Part II.

You were one-half of the Big Blue Wrecking Crew. Never forget that.

Finally, David, I know you had no control over the decision to label your foray into ninja family films alongside the youngest of the Reyes clan and a post-Karate Kid mortgage-gotta-get-paid Pat Morita as the fifth American Ninja installment, despite the fact said film had nothing to do with the franchise. You were just another martial artist-cum-actor with rugged good looks trying to make his way. I forgive you. 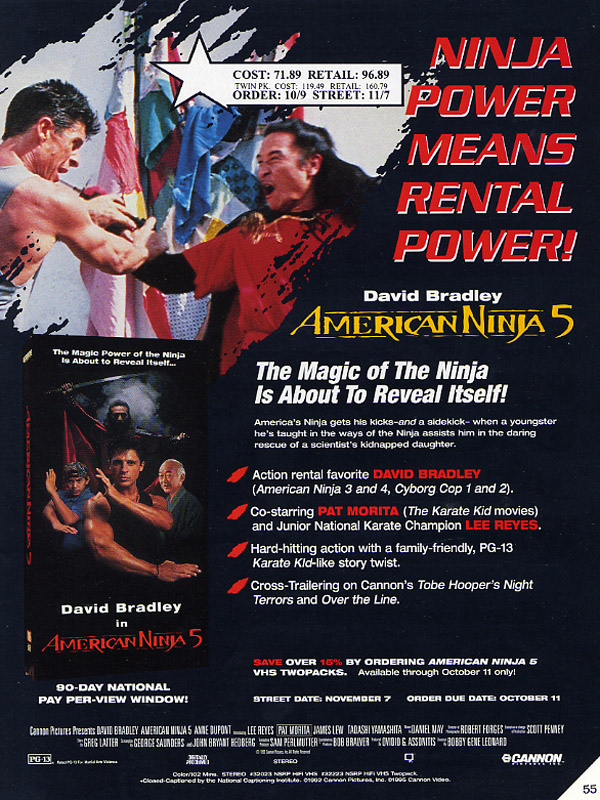 The point is simply this, David. In a quintessential B-movie franchise, you were a purer B-movie actor than Michael Dudikoff could ever hope to be.

EDITORS POSTSCRIPT: Thanks again to Matt f’n Wallace for the guest spot. A smidge younger than me, Matt sprouted his exploitation genre pubes to a later fare of direct-to-video and cable fromage. His tolerances for Don ‘The Dragon’ Wilson and Sasha Mitchell are of extraordinary magnitude. He has my gratitude for taking the four bullets for me that are the American Ninja sequels.These increasingly cheap and at times deliriously inept films lingered well into the kickboxing craze, embracing the worst parts of the original; primary-colored ninja, cheesy fortress dojos, increasingly silly ‘boss’ villains, high-kicking fights replacing anything resembling ninjutsu, etc. Despite the on-and-off presence of talents like Mile Stone and Steve James, each of these sequels was a nail in the coffin of 80’s shinobi-mania. They say ‘Only A Ninja Can Stop A Ninja.’ Well, starting in 1985, it took an American Ninja (or five) to stop the American ninja craze.