Next to Kaiketsu Lion Maru (which in a modern context some find waaaay to ‘furry’ for comfort)  Henshin Ninja Arashi was easily the most outre ninja hero ever — weird silver bird-like, but scaly, with some parts that look kinda moth-y, and he was a bird guy but he rode a horse, and are those big bug eyes actually eyes or fake eyes for decoration or what? Who knew…

But that outre character design, by Kamen Rider creator Shotaro Ishinomori, also lent the property multi-media crossover success, and merch from the short-running series is still being produced today. Here are some low-priced but nifty Arashi toys I’ve picked up in the last few years:

Now, if you want a more modern, and EXTREME, take on the character, there’s a new set featuring an – in my opinion – over-done reinterpretation of the character by modeling studio SIC. I think they’re trying too hard to make a pretty silly design look all dark and gritty and severe. But I do like the new version of series baddie Majinsai a lot. This set runs $70-100 depending on shipping. Check in out at Hobby Link Japan. 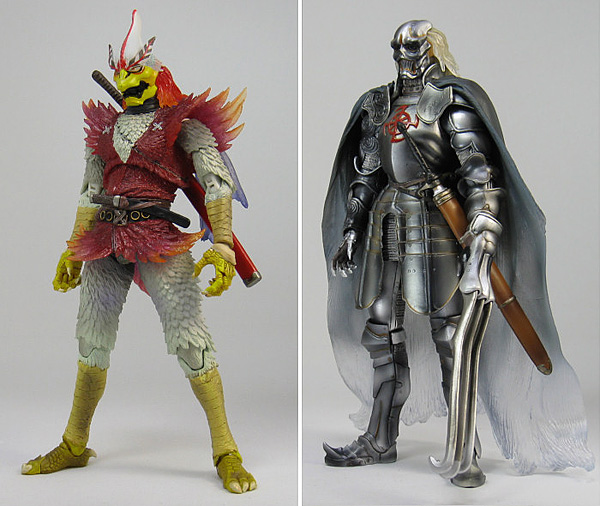 Ehhh… for my money, I like the simplicity and innocence of the original stuff, or at least new stuff that looks like it’s old, like these on eBay:

And while you’re at it, check out an AMAZING collection of really vintage vinyl from this and other series at Skullbrain!