We finally have the original Cannon Films Sho Kosugi ‘ninja trilogy’ on good home video formats! Sure, its a couple decades later than it should have happened, and at a time when the public is giving up physical media in droves, but hey, we the children of the 80s craze who love these movies enough to own them are still stocking our shelves of discs, aren’t we?

Kino Lorber have just released Enter the Ninja and Revenge of the Ninja on Bluray, joining the superb Ninja III: The Domination Blu put out by Scream Factory last year. 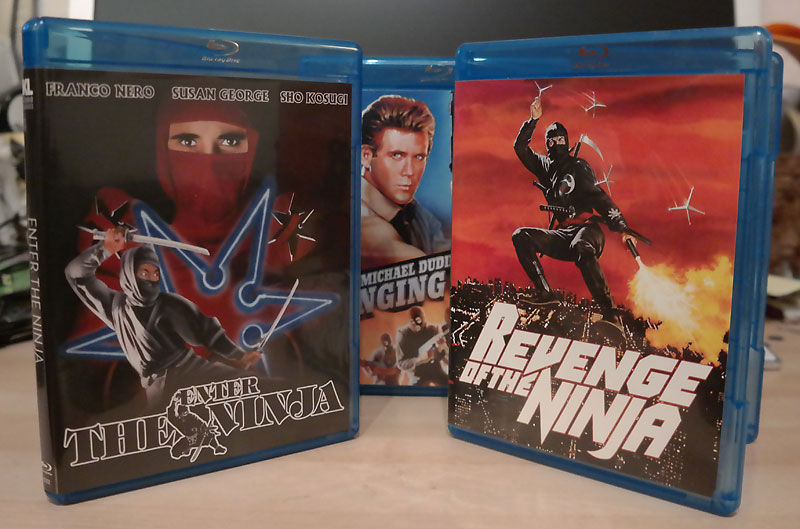 The Enter disc is, honestly, nothing special. The only extra is an already familiar trailer. There’s a marginal improvement via format, but its not a profound leap from the DVD-on-Demand disc MGM has had available, or the print streaming on Netflix and the like. It may even be cropped a little too much on top and bottom, but I’m not claiming to be an expert on aspect ratios and transfers.

Revenge has had a few different DVD releases where aspect was a serious issue though — some prints are a square “Open Matte” transfer that actually gives more image on top and bottom than the filmmakers intended. It’s neat for seeing some extra choreography here and there, but the image is small on widescreen TVs. Other widescreen prints have also been released on triple feature DVD packs that suffer somewhat from compression, so all in all the new Blu is worth buying just for the proper image alone.

But with his disc Kino Lorber also gives us full-length commentary from director Sam Firstenberg and stunt coordinator Steve Lambert. They talk some nice shop about stunt work in the analog age, having freedom from studio pressure while shooting out in Salt Lake City, Utah, and how legit dangerous some of the gags were, especially in the hi-rise building sequences. They pay nice homage to the fact that this film is often overlooked for making history with a sole Japanese lead actor, hint at what a direct sequel-that-never-happened would have meant for intended bigger player Keith Vitali, and Firstenberg’s memory for how many days it took to film a scene is like a steel trap.

Alas, the disc is otherwise barebones. A behind-the-scenes gallery promised in press releases and package copy is either missing or hidden in menus I can’t find, so that’s a red herring. I or myriad other sites would have given them considerable stills and marketing materials for a gallery had they asked, and Lambert is a veritable font of still materials, so no excuses.

In fact, I’m miffed enough at this to compensate by presenting some rare alternate take and missing scene stills myself, courtesy of MGM’s electronic press kit from years back (see more over at IMDB): 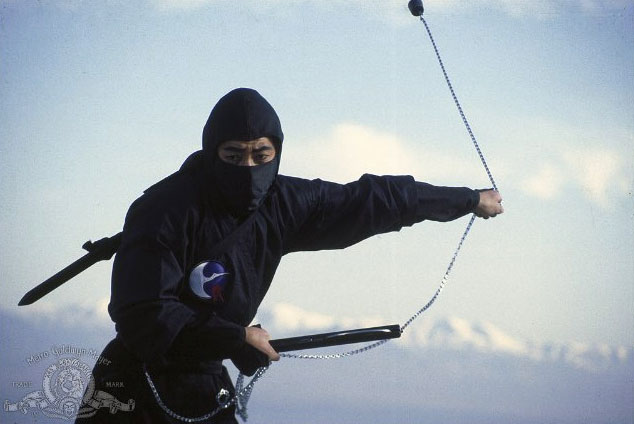 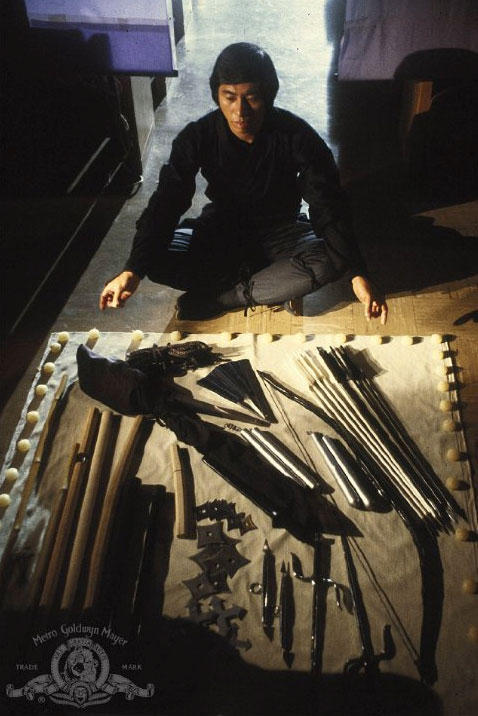 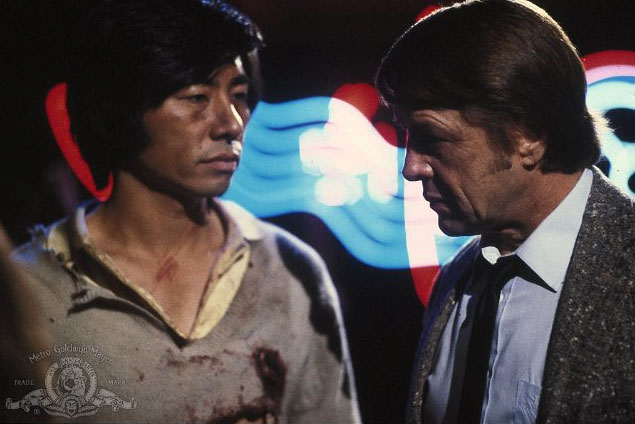 Here’s a couple from the cut scene (you see it briefly in the trailer) of National Guard snipers dispatched by Braden before the final duel: 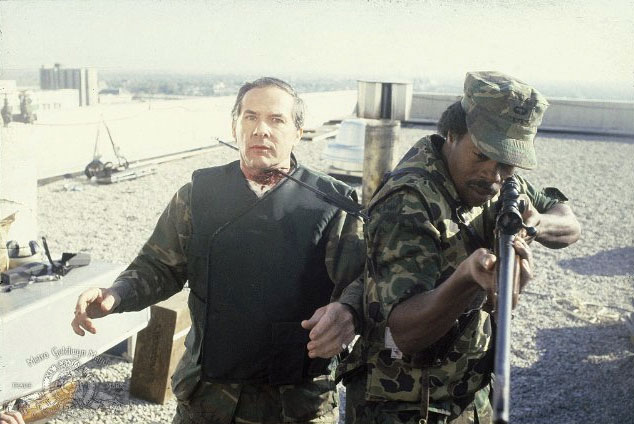 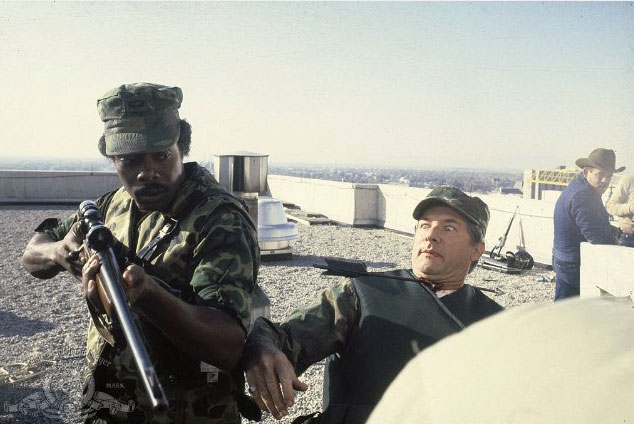 This is the same “da-fuq???” look I had when the stills gallery turned out to be absent from the disc: 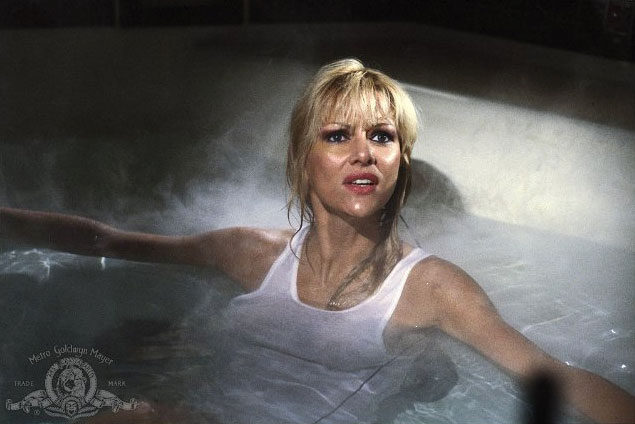 There’s also a missed opportunity, and I can’t fault them too much as it’s probably a significant rights issue, to present the superb Rob Walsh synth score as an audio bonus. Again, were these films put out at the height of DVD when labels heavily invested in extras, this would have been a given. We take what we can get in 2015.

BUT… despite any geek-gripes, we’re wholeheartedly recommending this new disc. The Octagon and Enter may have come first, but Revenge is the movie that cemented the ninja craze. It’s running time is almost completely combat, chases or stunts plus it put weapons-play on screen no one had ever seen before, and that’s a real trick in the martial-exploitation realm. This is the best version of the movie available and it is mandatory viewing for any ninja nerd, so get to it!

Kino Lorber have also released the Michael Dudikoff/Steve James ‘Deadliest Game’-inspired Avenging Force on an extras-peppered Bluray, and are giving the same treatment to the duo’s first American Ninja flick, as hinted by Judie Aronson on her Facebook fan page. Dudikoff, Firstenberg, Lambert, Aronson and even Tadashi Yamashita reunited in the Philippines last year for a documentary shoot, joined by Steve James‘ daughter Debbi, who’s pursuing a doco of her own (read more at My Dad Steve James).

Bitter as many of us are that these films were largely ignored or under-serviced during the DVD boom, when profound extras and deluxe box sets were aplenty, it is great to finally have them all in peak condition, and legit, too. Kudos to Kino Lorber!