EDITOR’S NOTE: While Kinji Fukasaku’s version of this surreal epic, starring Sonny Chiba, Kenji Sawada, Akiko Kana, and Hiroyuki Sanada isn’t an outright ninja movie, between Chiba’s shinobi-pedigreed Jubei and the villains’ ninja-garbed masked henchmen there are enough tangents to merit this more than recommended movie’s inclusion on this site. Rather than repeat my typical lauding of the combat and stunts of the Japan Action Club and Star Wars-era effects Kadokawa brought to the table, I wanted the outré religious aspects of this flick explored by a more qualified voice. VN is delighted to introduce Tenebrous Kate to a largely new audience.

Sometimes I wonder if being an American movie-viewer has made me a lazy audience member. As Americans, we have certain expectations when we watch action, horror, and fantasy movies—we’ll know who the good guys are, we’ll understand their motivations, and there will be a conclusion to the story in which the good guys achieve some measure of success. The opportunities for novelty within American pop entertainment movies lie in the visual presentation of material, not so much in the structure of the story. 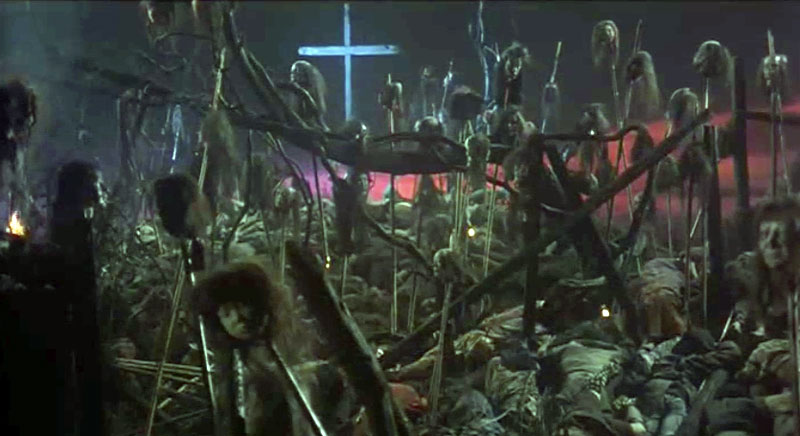 These expectations are why it can be so extremely disorienting to encounter a movie like Samurai Reincarnation, a 1981 Toei production by Kinji Fukasaku (a name familiar to many as the director of Battle Royale). Right from the opening frames of this movie, it’s clear that we’re in for a bizarre ride. This fantasy actioner begins by showing the gory aftermath of the massacre of tens of thousands of Japanese Christians at the hands of the shogunate. Samurai Shiro Amakusa is resurrected from the dead only to see the mutilated bodies of his fellow Christians. He might seem sympathetic but this changes pretty quickly when, seconds after his reawakening, Shiro renounces his faith and asks for the assistance of Hell in seeking revenge. This is probably the worst way for a religious person to go about righting great wrongs, and this formerly pious warrior is transformed into a bloodthirsty villain who uses a whip made of the hair of Christian martyrs to defeat his enemies. 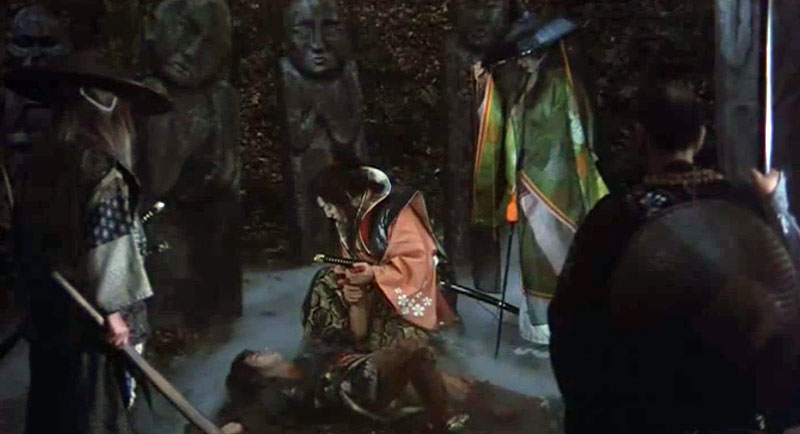 The newly devil-powered Shiro travels the countryside building a dream team of resurrected men and women who agree to accept new life from him (a perverse Anti-Christ figure) in order to pursue the goals that had been denied to them in life. This is an odd group, ranging from tragic characters (Lady Hosakawa’s horrible, unfaithful husband has her killed and young farmer Kirimaru dies during a raid on his village), amoral ones (Musashi Miyamoto dies unsure of his status as finest sword fighter in the land), and… well… then there’s Inshun, a monk who was unable to realize his dreams of raping and murdering lots of women and agrees to be resurrected only after he’s promised a glorious afterlife brimming with sexual assault. While each of the five undead tried, during life, to achieve a level of goodness, all inhibitions are out the window when they’re given a new lease on earthly existence. I’m no Bible scholar, but I feel like this story might be criticizing these people’s failure to “turn the other cheek” in accordance with the Christian faith.

Meanwhile, the shogun and his men are busy exploiting the peasantry, raising taxes and imposing harsh punishments in spite of crop failure and general destitution. The shogun maintains a deliberate distance from the needs of his people and turns his attentions instead to getting it on with his mysterious new concubine, the previously pious Hosakawa in the guise of a courtesan. All is not just sexy job abandonment, however, and when demon-possessed Hosakawa accompanies the shogun on a hunting trip, she hypnotizes him into firing arrows into his own subjects and displaying their crucified bodies on a hilltop.

At this point, if you are a sane human being, you are undoubtedly on #TeamNoOne. On one side, you’ve got a lapsed Christian martyr parodying his former faith and working black magic for revenge, but on the other side you’ve got a totalitarian government sadistically abusing and exploiting its subjects. This is a chaotic, cruel world, but there’s one man who serves as a symbol of rightness (or at least “traditional morals”—that’s about as good as we’re going to get here), and that’s Yagyu Jubei, a one-eyed samurai played by the legendary Sonny Chiba. Jubei is depicted as outside the Christian uprising as well as distanced from the corrupt government. He befriends the poor and has honed his skills as a swordsman independently after losing an eye while sparring with his father. Jubei seems fated to fight the demons: he was a friend to Kirimaru during his lifetime and his skills as a swordsman are envied by Musashi, whose demonic existence is dedicated to seeking out Jubei for a duel.

Jubei is among the first to realize the supernatural threat posed by Shiro and his posse, and his warnings are thoroughly ignored by everyone he attempts to inform. Jubei only manages to convince Murumasa, a forger of magical swords, of the reality of the threat after the sword-maker witnesses Musashi’s demonic nature firsthand. Over the course of many days, Murumasa dedicates his waning power to making a sword so powerful that if the wielder encounters God, “God will be cut.” 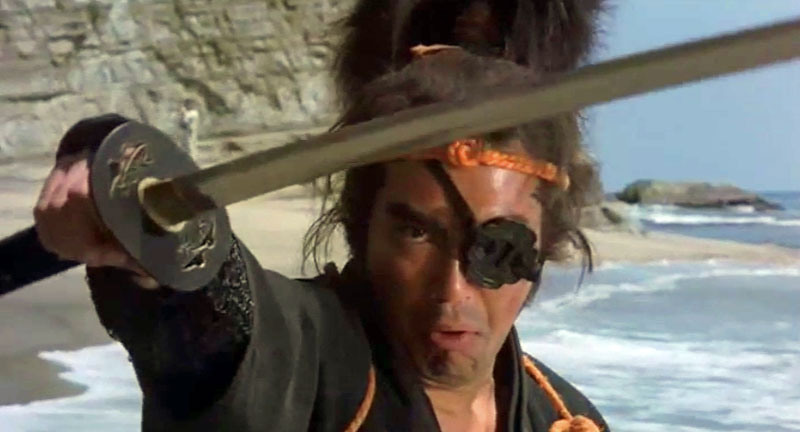 And it’s high time Jubei gets his hand on a God-cutting sword, too, because Shiro has used that aforementioned hilltop crucifixion to incite a full-scale peasant assault on Edo, the seat of government power. Honestly, this is not a terrible plan, given that the shogun and his men have demonstrated a level of viciousness towards the populace that warrants some serious backlash. People get uncomfortable when peasants start putting heads on pikes, and it’s up to Jubei to make sure order reigns and the farmers get back to a proper acceptance of their lot in life (besides, prohibitions on Christianity would be lifted eventually, over two hundred years later in the latter half of the 19th Century).

Samurai Reincarnation is a movie that applies Toei’s fantastical, special-effects-reliant style to telling a pretty damn dark story. The sets and costumes used throughout the film are lavish, creating an immersive atmosphere. Characters don sumptuous brocade kimonos, elaborate wigs, and colorful eye makeup in a manner characteristic of Japanese historical dramas. Exploitation movie staples like female nudity, geysers of blood, and hacked off heads and limbs are a constant reminder that we’re watching a horror fantasy story. The use of thick fog to signify the presence of demons is and effective and moody visual. Long spans of time are spent establishing character motivations and story elements (there’s a whole subplot involving Jubei’s father that I haven’t discussed above, to cite one example), so the pacing can be a bit on the slow side. When action sequences do occur, they are highly stylized and athletic, with plenty of the leaping, cloth-flapping, sword-clashing pageantry one expects from Japanese action dramas. Of particular note is Jubei’s final showdown with his enemies, which takes place in the fiery remains of the palace and appears as if it was legitimately dangerous to execute. 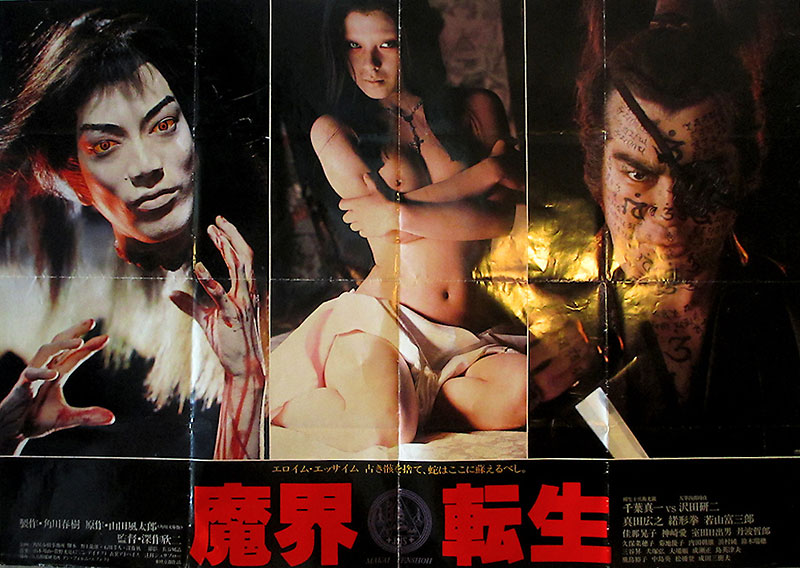 A swashbuckling adventure and supernatural thriller, Samurai Reincarnation is also a story of how people sacrifice their humanity in pursuit of revenge and other unattainable goals. The fact that the peasants are portrayed as a devil-possessed mob suggests that even their just cause is seen as a hopeless one. An ambiguous ending further underscores the overall darkness of the movie.

While the Shogun Assassin-meets-Sign of the Cross-with-an-added-helping-of-nihilism combination of Samurai Reincarnation might seem strange, the story is incredibly popular in Japan. The 1981 film is the first screen adaptation of a 1967 novel of the same name by Futaro Yamada, which is itself based on events of the Shimabara Rebellion of 1637 – 1638. It doesn’t stop there, though: four other movies that take the novel as their inspiration, to make no mention of the multiple manga and video games. The line-up of Shiro’s demon gang changes among these stories, but the themes (and the presence of hero Jubei) remain the same.

What gives Samurai Reincarnation its magic is the fact that it is a uniquely Japanese movie. Combining historical fact and traditional morals with flashy genre-style movie making, it’s a pop entertainment product of its culture.

Tenebrous Kate is a New Jersey-based writer and artist whose work explores her longstanding fascination with all things dark, fantastical and forbidden. The creator of the webcomic Super Coven and the editor of various zines under her imprint Heretical Sexts, Kate has also written for publications including Ultra Violent Magazine, I Love Bad Movies and Occult Rock Magazine. She has appeared in New York-based comedy variety shows including Kevin Geeks Out, Meet the Lady and Bonnie and Maude, and Love Train for the Tenebrous Empire is her long-running blog where she writes about psychedelic cult films, bizarro art, throwback forms of heavy metal, and all manner of other esoteric nonsense.