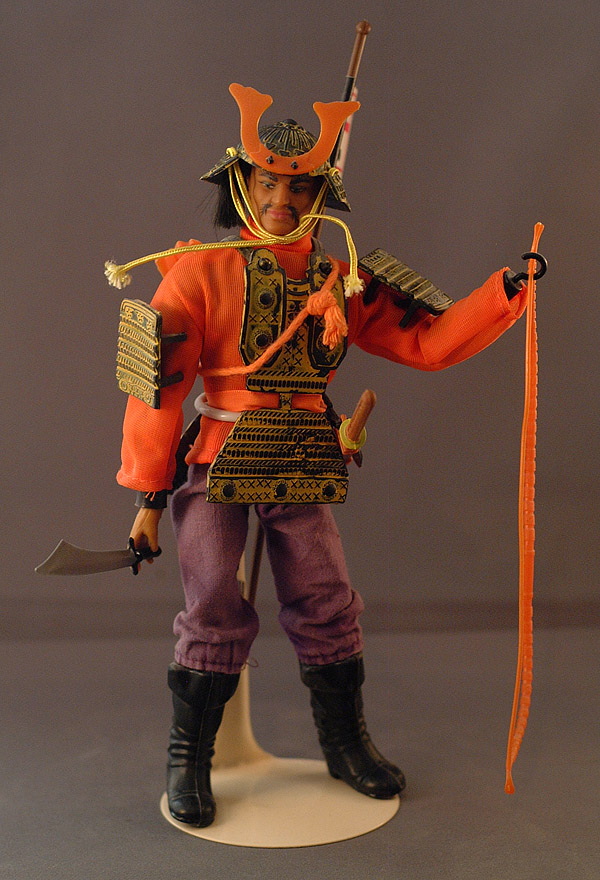 OK, so there’s no direct ninja-ness to this post, but I have a serious love for weird 70s martial arts toys, and where else am I going to find a home for these pics?

Circa 1974-75, Matchbox had ambitions beyond their toy car presence, and their line of 9″ pirate figures called Fighting Furies competed with Evel Knievel, Big Jim and Mego superheroes for the allowance dollars of every kid in America. 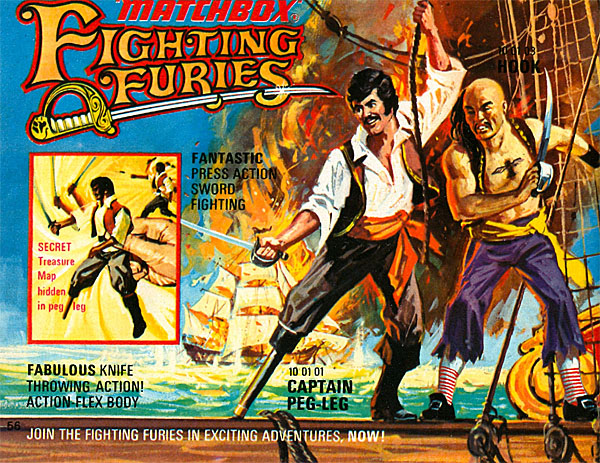 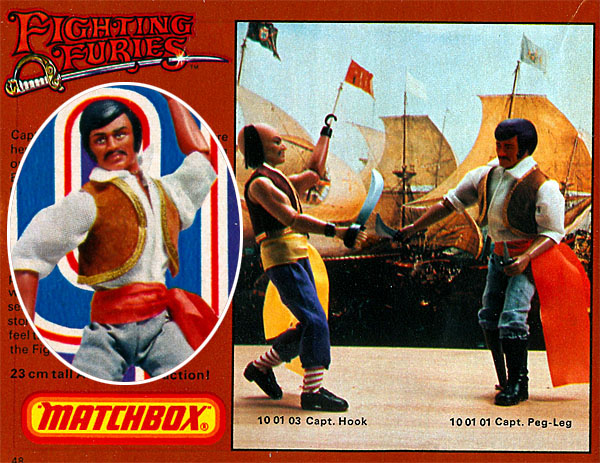 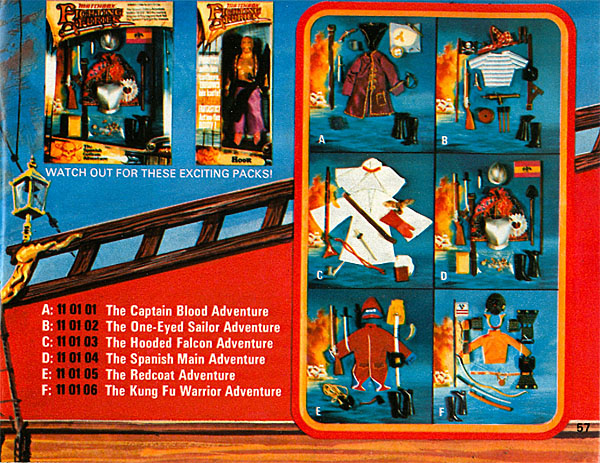 The two base figures could be outfitted with a variety of costume sets, each seemingly named after some type of exotic love toy or obscure sexual euphemism. 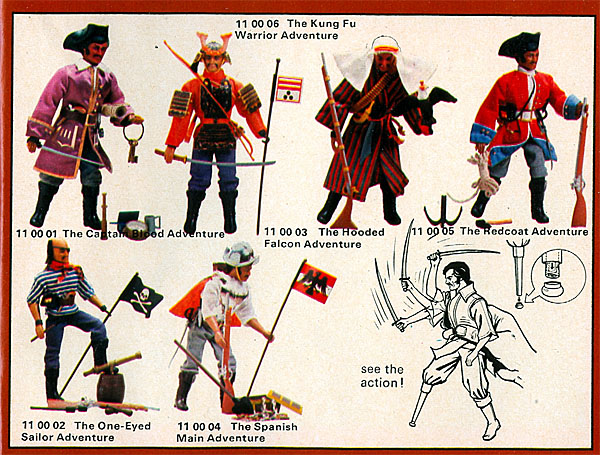 What the Furies had that other toy lines of the time didn’t was WEAPONS; muskets, swords, daggers and even a full rig of Japanese armor. 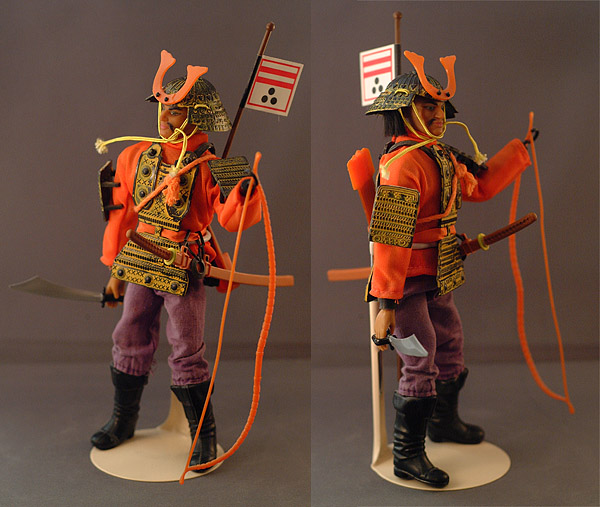 I’m not a major toy historian or anything, but I’m thinking this was the first samurai action figure made outside of Japan. The “Odd-Job” toys from the various mid-60s James Bond lines were likely the first martial arts toys done in the West, and various karate and kung-fu outfits were produced for GI Joe and Big Jim lines, but this is outright samurai armor – rare in the time before Shogun. 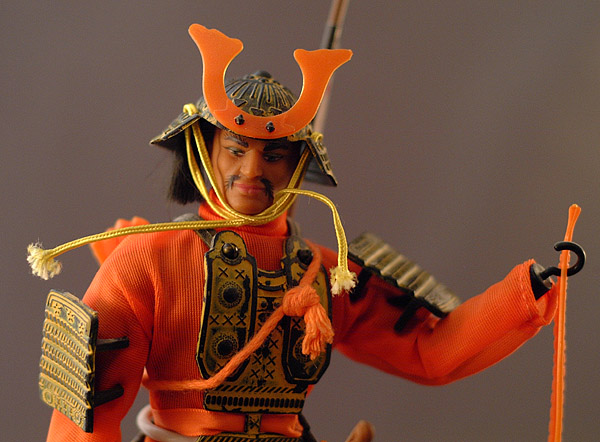 And someone did their homework, too. Details and designs faithful to the historical source all around. Of course, that homework stopped at what country and martial tradition the armor was actually from. 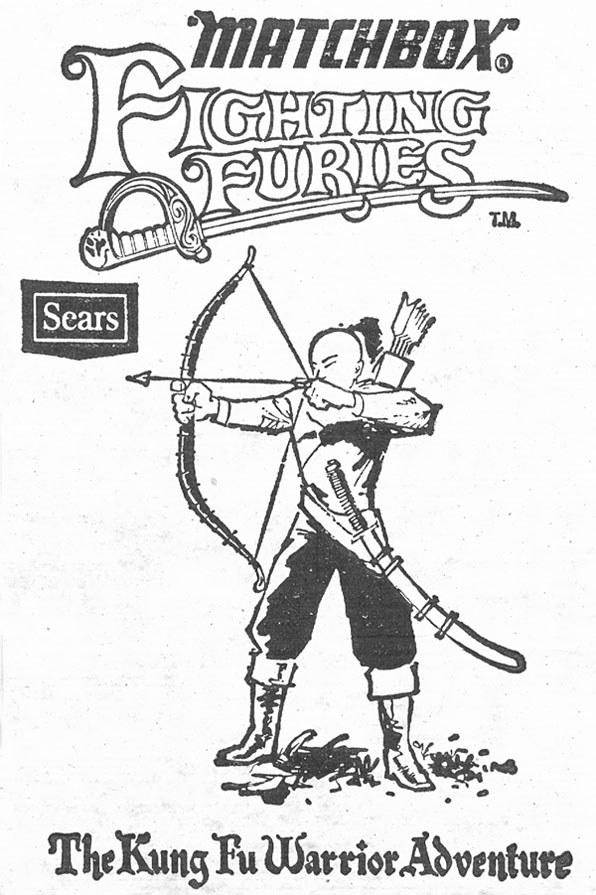 Package art and instruction sheet insert illos were consistent with the cross-cultural cluelessness (or carelessness) of the day. The name set in European blackletter (sitting somewhere between German and Spanish typography) just adds to it. 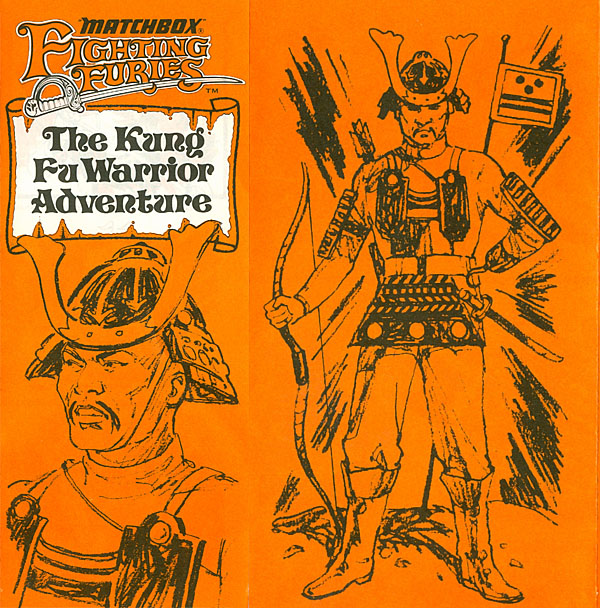 “Kung-Fu Warrior” may have been chosen based on the success of the the David Carradine TV show, or maybe them there Orientals just all looked alike to the honkey toy marketers. The “adventure” comic strip didn’t shed a whole lot of light on the Japanese/Chinese mash-up. (click to enlarge) 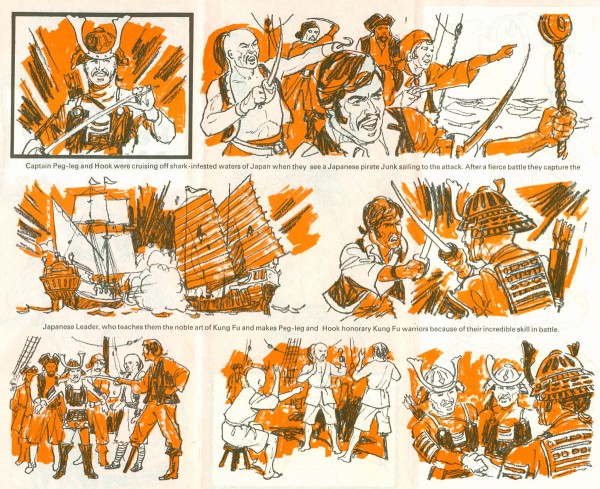 Either way, the cheesy disregard or ignorance of Asian cultures combined with surprisingly accurate details to ancient armor is one of the weird mutations I love about pre-80s martial arts toys like this. 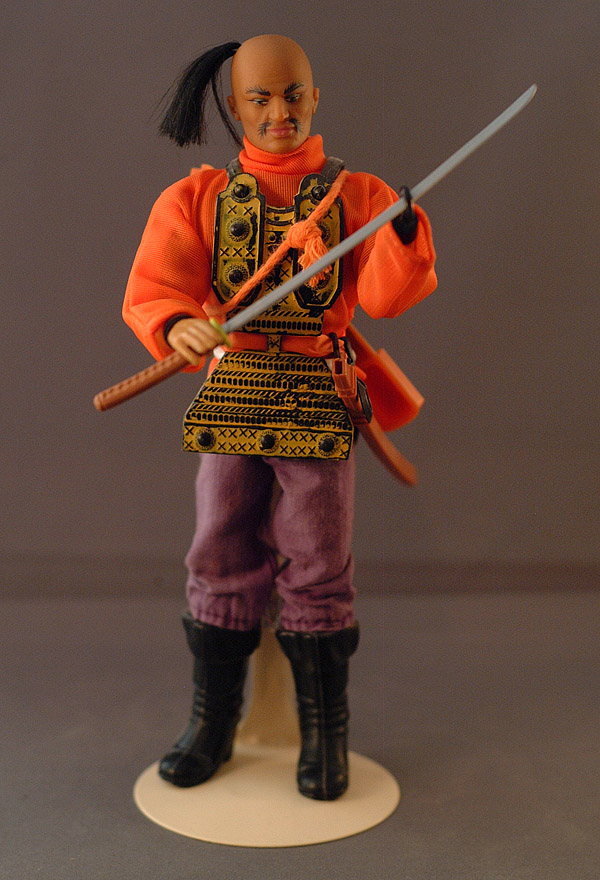 The “Captain Hook” head sculpt is striving for sinister, swarthy villain, but the addition of feminine eye shadow makes him a hero to kids everywhere. 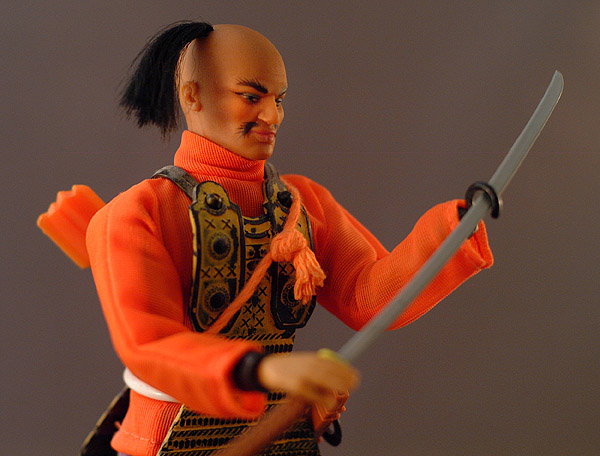 Makes sense to suggest this Eastern-themed accessory pack be used with the Eastern-y figure, but the hook-hand does pose some challenges to traditional bushido. 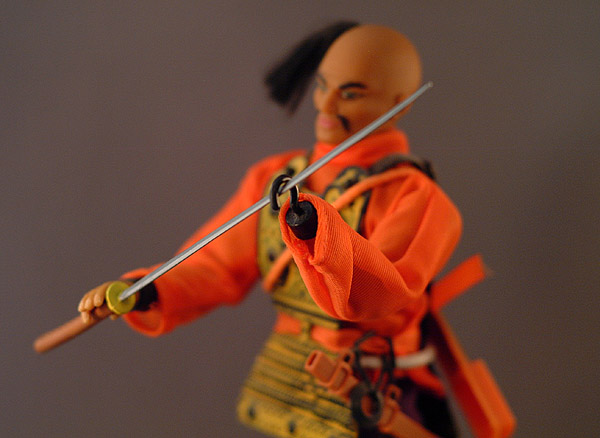 Really not sure what he’s going to do with that Japanese long bow! 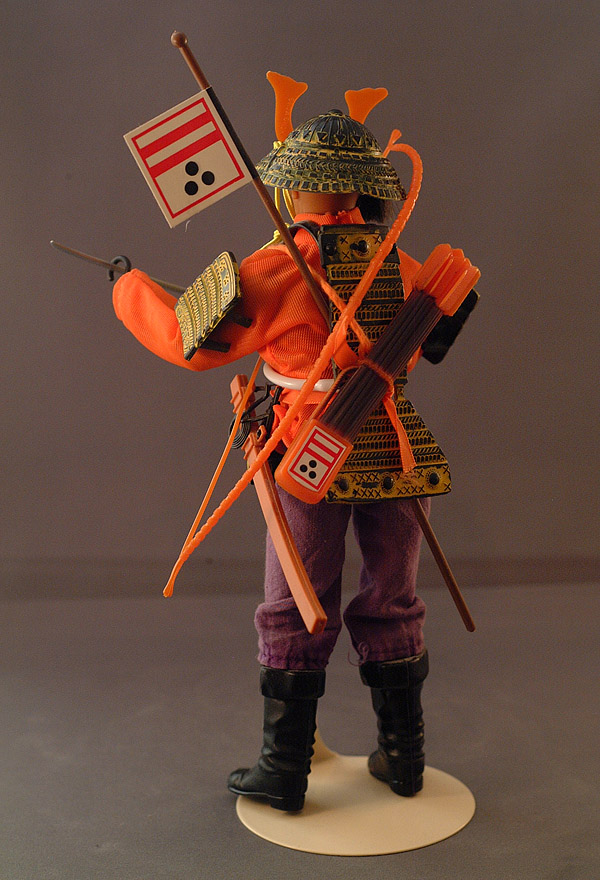 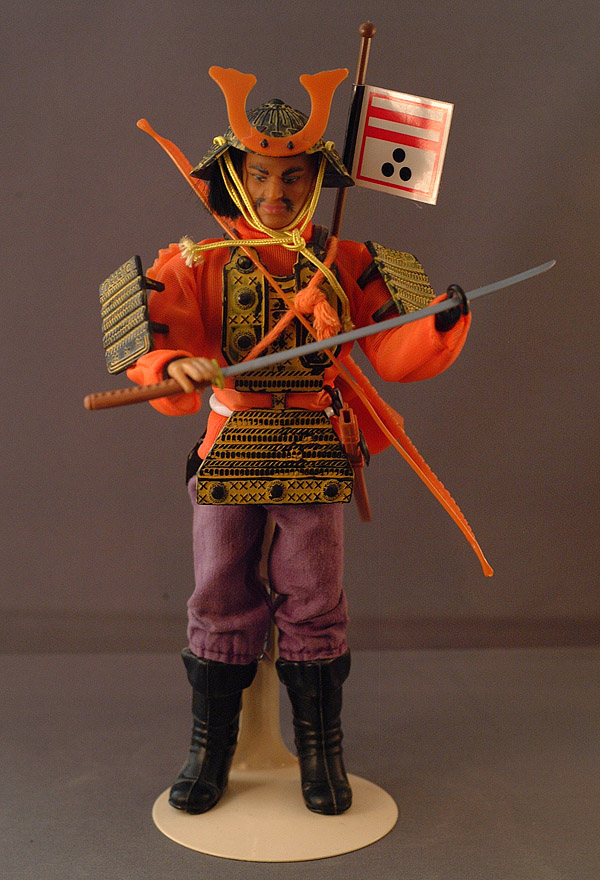 Ultimately, the Fighting Furies accessory sets didn’t need cultural or historical responsibility, because they could just play the PIRATE card. This stuff would have been scavenged on various seaborne misadventures, so it could be mix-and-match, out-of-context and out of its mind if it wanted to be.

Had the line been more successful, we could have seen The Caveman Conquest, The Viking Funeral Adventure, The Rough Rider’s Revenge, The French Mistake, The Freaky Flapper’s Weimar Weekend, The Cosmonaut Cocktail Hour… endless possibilities.

The best resource for this toy oddity is the superb Plaid Stallions website, where you can see these, the amazing “Ghost of Captain Kidd” figure (a a glow-in-the-dark ghost/zombie pirate decades ahead of its time) and the European-only Western gunslinger, Mexican bandito and Indian war dancing shaman sets.

How were these guys marketed as heroes for kids?!?!?