So Five Element Ninjas… is this martial arts alchemy experiment the nexus of one craze on the outs and another on the rise, or is it just an embarrassing oddity shunned like a red-headed stepchild by snobs of two different genres?

Although FEN was an international hit, looking back, it didn’t exactly save the ailing Shaw kung-fu genre, did it? If the studio had been able to get over hyper-villifying ninja, and actually create a pro-ninja film, they might have enjoyed more success in the 80’s, especially exporting product to North America. We didn’t want to see evil ninja slaughtered by old 70’s cliches over and over again, we wanted lone ninja bucking the system and kicking-ass around office towers or driving around the country in conversion vans with hamsters. Couldn’t Runme Shaw and Mona Fong see this?!?!?

I really wish Chang Cheh had done a film where ninja and Venoms face-off, and a lone rebel refutes the ninja life for a new home in China, only to have his commando skills save the day in some ironic twist of martial fate. That flick would have been consistent with both the Japanese 60’s themes and the Hong Kong 80’s conventions, and with a ninja as HERO sure as hell would have been a hit in American video stores. Sigh…

What did really happen, though, was the inevitable wave of imitators and knock-offs went on to prove over and over that Chinese ninja stuff had just as much a place on the rental shelves and werewolf circuit theaters as any other country’s output. And man could they kick out more of it cheaper and faster than anyone else. Ninja in the Deadly Trap was produced right on top of FEN, complete with gold lamé ninja and green-clad forest shinobi fighting moonlighting Venoms.

The success these movies had, though, was based on a little shinobi-subterfuge in itself. Anything with a ninja image, or just the word in the title, sold on video in the 80’s no matter how good or bad, trendy or dated, it was. So these kung-fu films with ninja as cannon fodder were profitable by default. And although FEN was a highpoint in the Chinese ninja trade, it was a hopelessly 70’s looking movie, with a dated aesthetic, released in a forward-thinking decade. It’s hard to believe movies like Ninja in the Dragon’s Den and Duel to the Death were being produced right at the same time – they look decades apart.

28 years later, Five Element Ninjas watches better than ever. I have a lot of love for this flick, both as classic Shaw and 80’s ninja camp.

AND THERE’S NEVER BEEN A BETTER TIME TO OWN FEN!

Simply put, if you don’t own the Tokyo Shock (or Region 3 Celestial) Five Element Ninjas DVD, you just haven’t seen the movie!

Previous releases under the Chinese Super Ninjas title were not only pan-and-scan, but significantly censored. But if you appreciate even these releases, you’ll be blown away by how much more of the mayhem there is in REAL Shaw-f’n-Scope, and how great some of the fight choreography is now that you can actually see all the combatants in the frame.

And for the haters – well, here’s where you give this historically significant oddity a second chance. At least hate the REAL version of the film, not the butchered one that’s so easily dismissed.

Take a look at some comparisons: 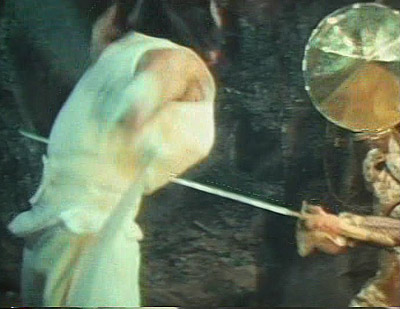 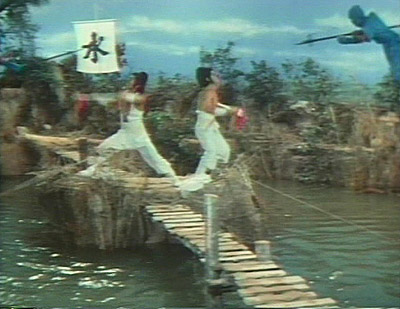 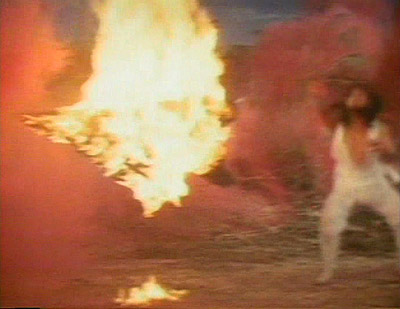 Pretty amazing what you miss in inferior transfers. Besides the glory of the wideness, correct colors (important in a gimmick movie like this!), and a razor sharp print, there’s also a LOT more gore, and some additional flesh, including this often cut, completely inexplicable scene where one of the clearly male fire ninja reveals himself to be a chick to distract an opponent. Another WTF moment in the one of the most WTF-worthy films in martial arts cinema history.

The imported Celestial DVDs, which have been around for years, feature the wide, remastered print, original language tracks with English subs, and a boatload of trailers from other Shaw Bros. reissues. They’re not all-region though. Not a big deal, for as of March we finally have a North American friendly version from Tokyo Shock, which has in addition to the original language and subs, the familiar cheesy dub we all know and love from back in the day. There’s also an exclusive interview with Lo Meng of the Venoms.

OK, great as gold lamé ninja may be, next week its time to get back to some 60’s Japanese stuff…