If you were a young devourer of manga and anime in the 1980s, creator Takao Saito will always be the man who gave us Golgo 13. However in the mid-2000s the good folk at Animeigo released two early 70s live action films that adapted his manga Kage Gari, aka The Shadow Hunters, and that property has since gained a cult following. By reader request, we dove into the Hunters in its various incarnations.

Saito’s original 1969 manga introduced three freelance swordsmen — Jubei, Moonlight and Sunlight (or Moonbeam and Sunbeam depending on the translation) — who were basically the anti-ninja Three Musketeers. For Saito, shinobi, in the declining era of the Shogunate, were reduced to errand boys of the corrupt government, used to shit-stir and plant evidence damning the fate of lords whose land was of value. 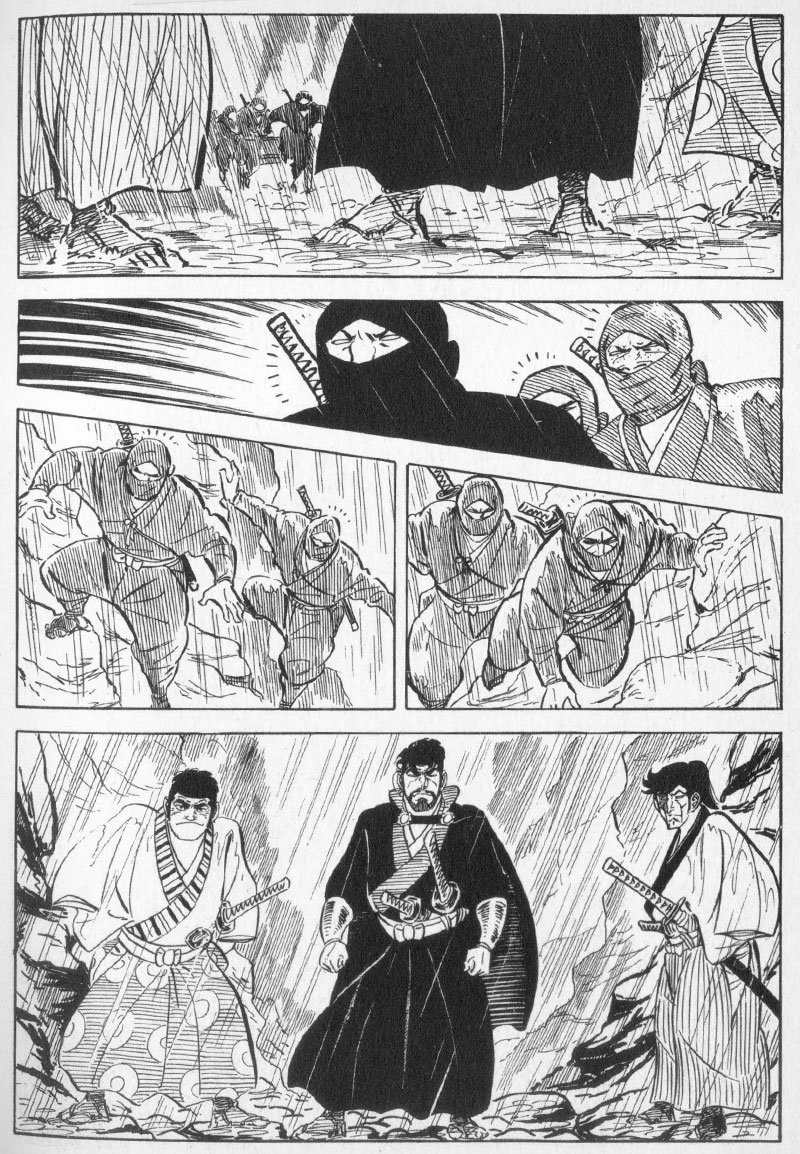 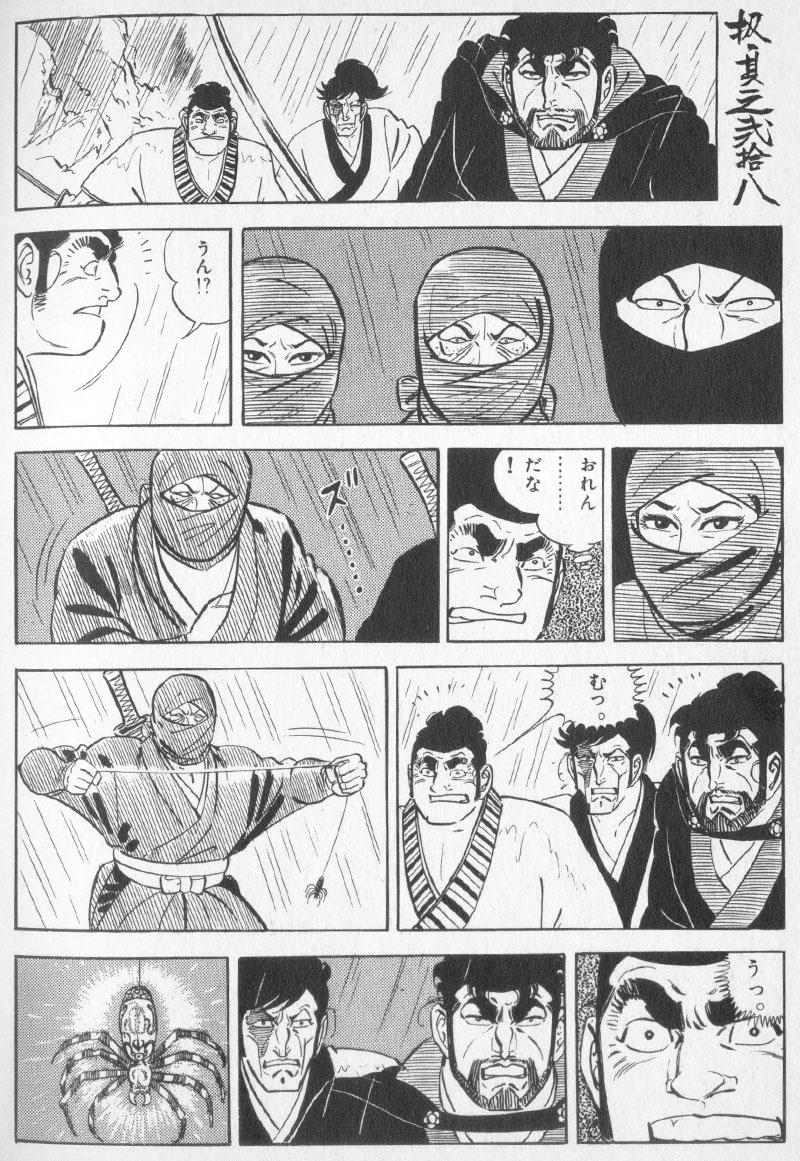 Jubei, the trio’s leader, was a glum but driven butcher of ninja, haunted by having to second the hara-kiri of his own daimyo — a grade-school age child, the victim of a crooked political scheme enabled by ninja catalysts. After that, he hit the ronin road, sworn to slay anything in a ninja suit. 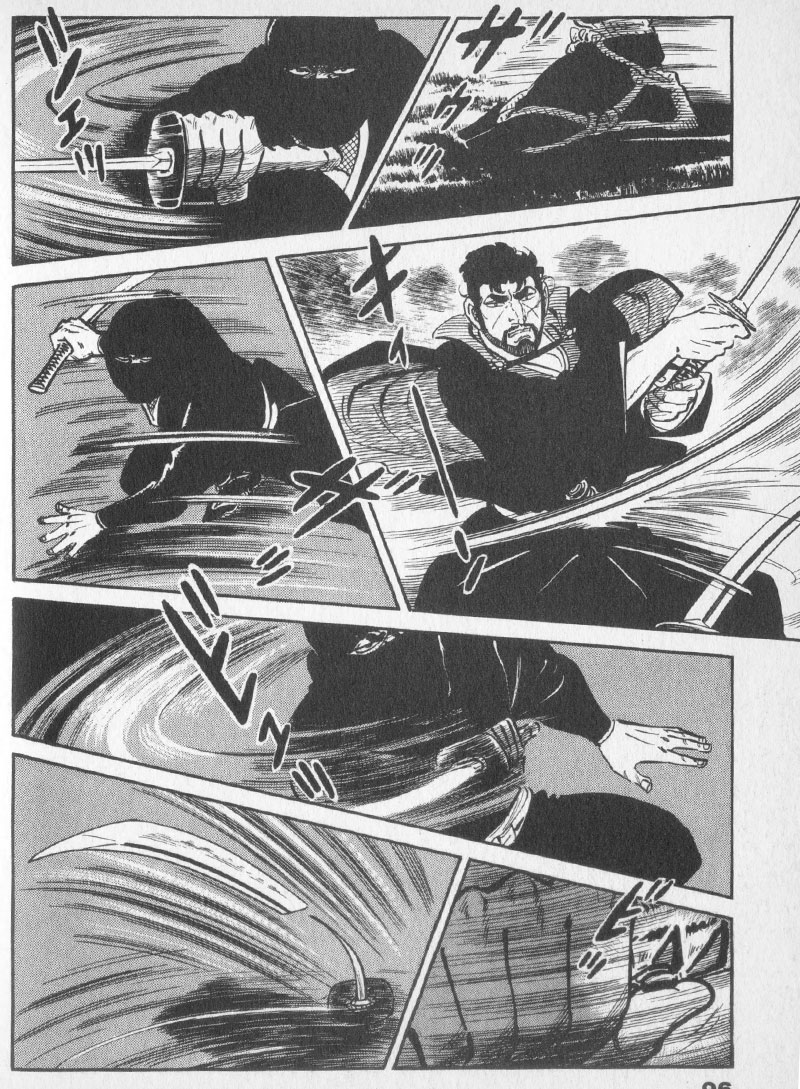 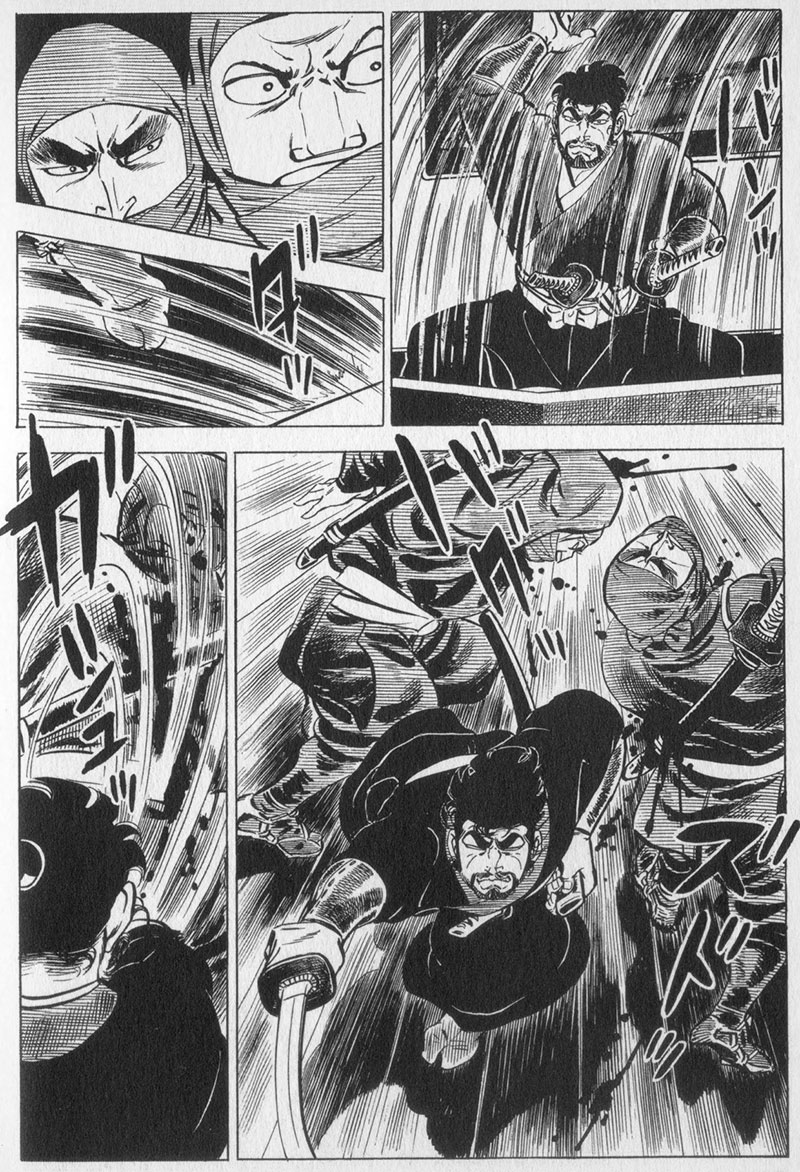 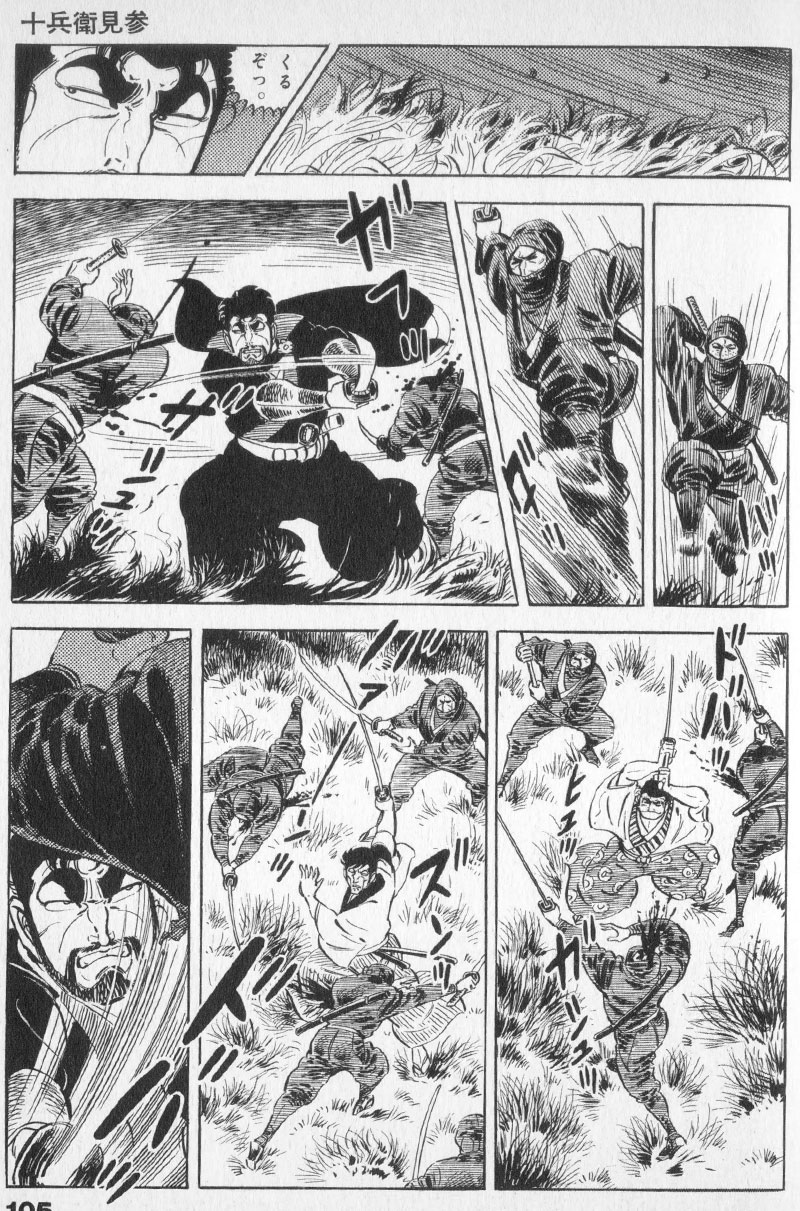 Joining the shadow-obsessed Jubei is Moonlight, the ace swordsman of the crew, haunted himself by the deaths of his wife and child in another ninja-fueled government shenanigan. With a face marred by a huge birthmark, Moon is often portrayed with that hair-over-one-eye deal so prevalent in Japanese character design. 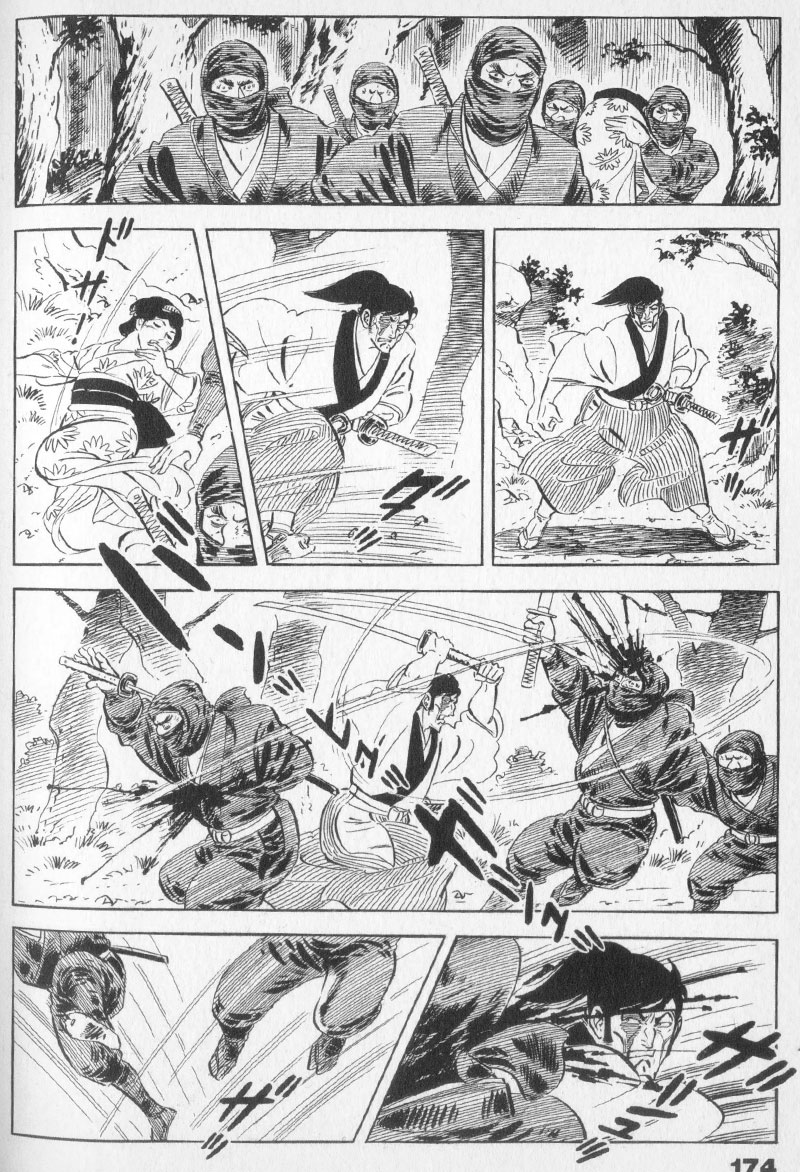 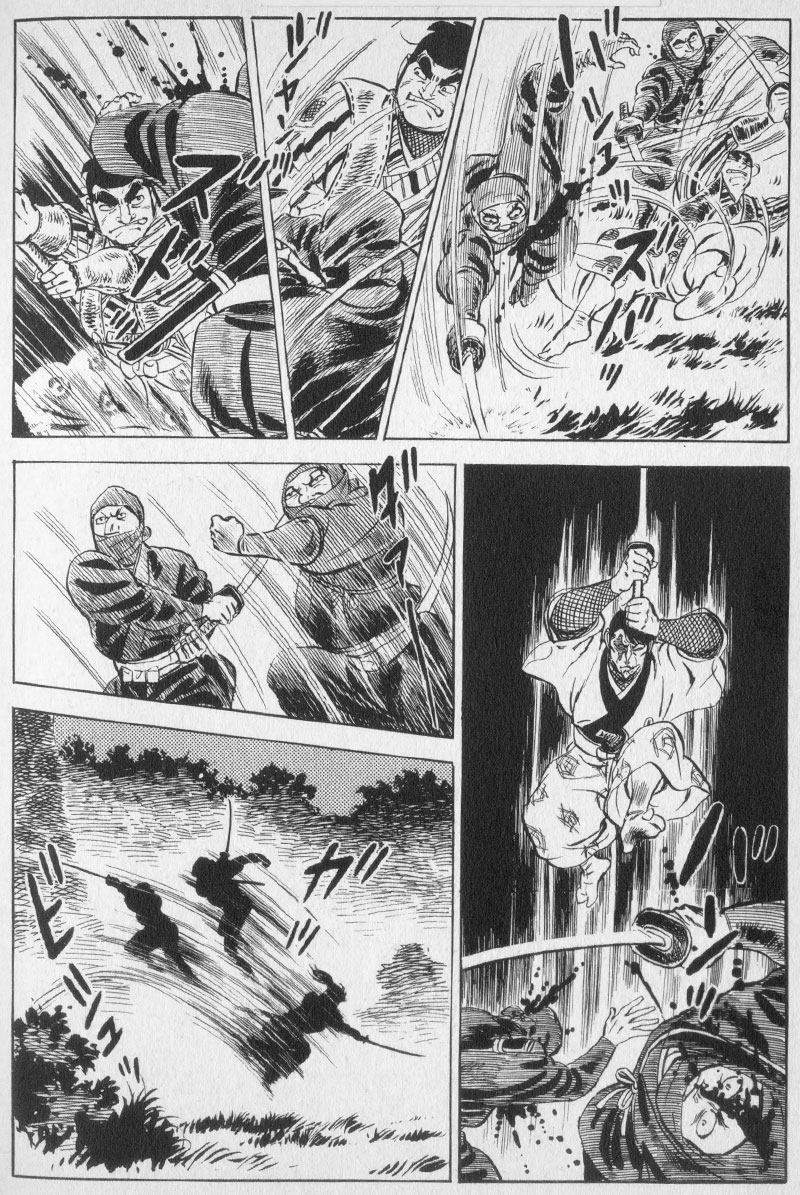 Rounding out the trio is Sunlight, whose pudgy build automatically pegs him for comedy relief. But in this case, Saito tips the trope cart a bit and makes him an ironic ladies man of sorts. His wang is evidently a divining rod for back-stabbing kunoichi, as scenes like this are common: 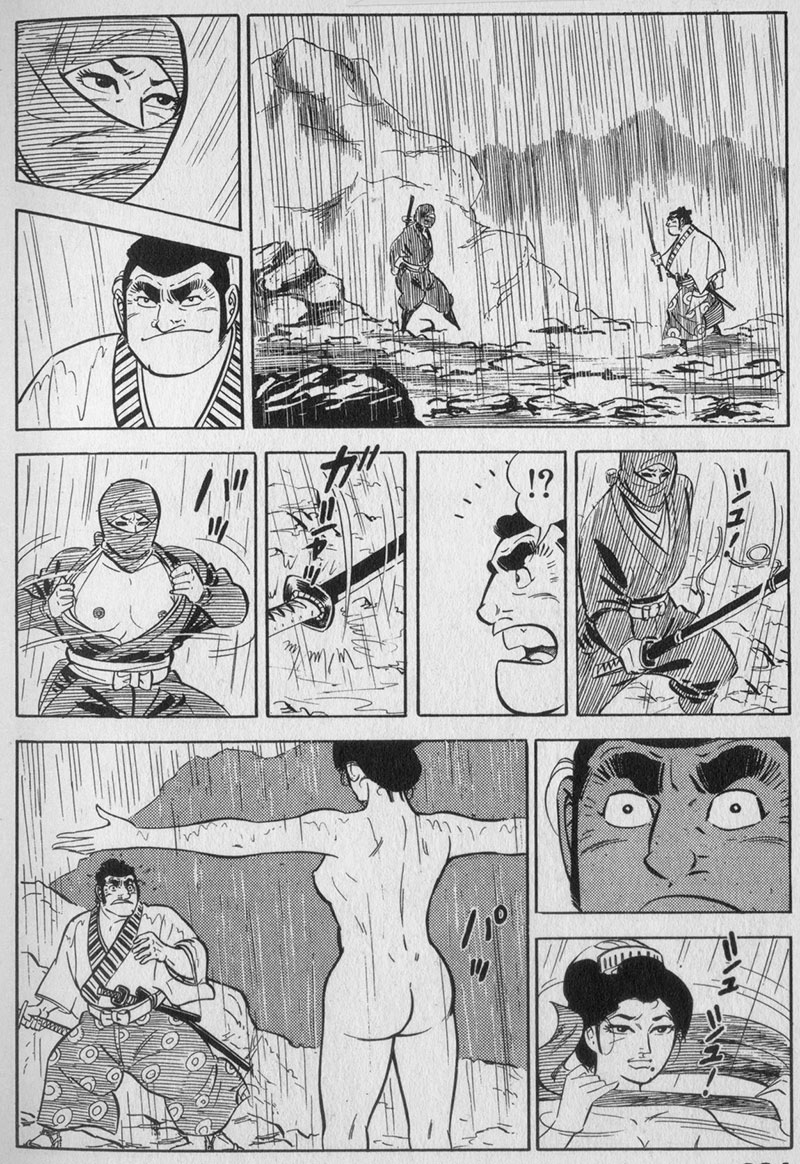 Despite the fact that Kage Gari is little more than ninja butchery in bulk, it’s a pretty damned fun looking manga. The devalued ninja of this series were less resourceful, less skilled than their earlier 60s ninja craze counterparts, and the law of inverse effectiveness was in full effect — the more ninja in a fight the less deadly they are.

Perhaps it was an allegory for the waning 60s boom and the impending 1970s, a decade not so friendly to our beloved hooded set. As B&W ninja noir fell out of favor, and the hooded heroes migrated and morphed to Saturday morning kids fare like Lion Maru and Henshin Ninja Arashi, the shinobi of the silver screen became more relegated to cannon fodder roles.

In 1972, while Tomisaburo Wakayama was starting his six-film ninja slaughter over in the Lone Wolf & Cub mines, Nikkatsu screen idol/recording superstar Yujiro Ishihara optioned the books for his own production company, producing two films back-to-back with similar tone… and voluminous ninja body counts. 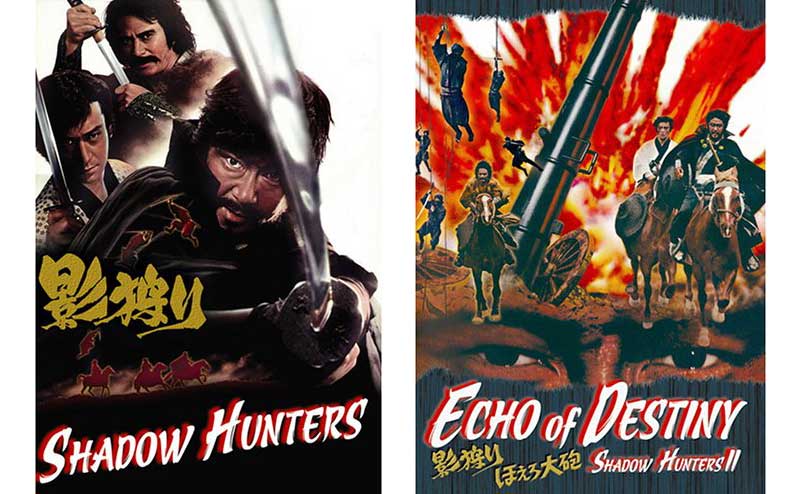 Kage Gari (Shadow Hunters), and Kage Gari: Hoero taihô (Shadow Hunters II: Echo of Destiny) were rushed out in 1972 by director Toshio Masuda, known in the West for his work on Tora! Tora! Tora! (after avoiding a grim fate as a kamikaze pilot himself) and the animated Space Battleship Yamato films.

There’s a decidedly different tone of the films to the books, dictated by a variety of factors. Everything from the bland slate-like blue/grey tint of the contemporary film stock to the general underlying fatalism of 70s Japanese cinema is at work here. These are downer movies, and often the only splashes of color apparent therein are the ludicrous gushers of ninja blood.

In all the incarnations of this property, I find Jubei to be the least interesting of the trio, and its especially true here. Ishihara’s star status is completely lost on me, knowing him only from these films, where his low-key delivery borders on phoning it in. Despite some cool leather gauntlets and a sweet five-handed-handle katana, his swordsmanship is nothing to write home about, nor is the fight choreography and execution — especially in light of what was going on at the same time in the ‘Baby Cart’ films.

And his make-up becomes increasingly ridiculous…

The other men in the trio make up for it a bit. Moonlight is lifted right off the manga page. Mikio Narita, a personal fave for his portrayal of the evil wizard Kashin Koji in Ninja Wars, has the sort of physical presence that totally sells the calm, emotionless sword ace facing superior numbers, but secure knowing he’s the shit. Would-be ambushers who’ve done their homework on the Hunters set the most elaborate traps for him, too.

Of course the lust part gets him into the most trouble, and sometimes a kunoichi has to be put down in a giallo-like wardrobe malfunction.

Both films rest in plotting waters I kind of despise, truth be told — complex machinations that wind up killing off the non-principal cast but end up being a lot of work and lives sacrificed for nothing.

The first film has the Hunters chasing after a document that will allow the Shogunate to snatch a gold fortune from an unstable territory. As things go, neither side really deserves the reward in question, but much of that gets forgotten in the wake of Jubei running into the former love of his life, played by the stunning Ruriko Asaoka (Goyokin, Incident at Blood Pass), who’s even more self-loathing than our hero.

The second film sees the crew escorting a huge cannon through ninja-infested trails, only to realize if it doesn’t fall to the shadows it’ll end up in the hands of the no-good government, so they blow the whole thing up — the cannon, the script, the overall moral of the story — boom. And all at the expense of another great beauty, pinky violence starlet Junko Natsu.

(If you want to see the Echo of Destiny story done right, any version of The Wages of Fear is great, but I’m particularly blown away by William Friedkin’s Sorcerer.)

There are familiar themes to the old ninja genre in the two live action films: any attempt or even the suggestion of domestic stability or bliss results in innocent blood being shed, the path of the sword can never be abandoned, etc. But laid over that ground is something you notice the more you watch 70s films — the deconstruction of the 60s ninja boom. All the resourcefulness, arcane arsenals and innovative shadow arts that made heroes of Goemon, Saizo, Juzo and Tonbei are now gone, replaced by an overwhelming willingness to surround a hero and wait your turn to run at him belly exposed, fake blood bag at the ready.

Yes, there are ninja tricks in Shadow Hunters, and there are swinging stunts and acrobatics and exotic weapons like the sickle and chain… but as a whole, competence has been sacrificed for quantity. The ninja attack in cowards’ numbers, running around in broad daylight in silly black pajamas unable to hit the broad side of a barn with a bladed weapon. By the second movie, the ninja gangs are actually smart enough to try to run away, and entire fights are spent by Hunters pursuing former combatants trying to flee the scene.

They also get caught in their own traps. Like, A LOT!

When cinematic ninja turned this corner in the 70s, everything degraded. The historians and martial artists were no longer on set. Wardrobe had to crank out dozens and dozens of cheap suits and the lack of tailoring showed. Budgets wouldn’t allow for adequate retakes so you see hoods coming undone during action scenes, and everything looks like it was just pulled out of a package, with pressing and fold lines apparent all over. Nothing seems to fit well and no one seems to have coached the extras and stuntmen in how to tie their friggin’ holds. These things drive me nuts…

For the most part, these shinobi are merely hooded swordsmen willing to sneak around and stab a foe in the back. But they’re not even good swordsmen! The more lackluster the heroes’ skills were on screen, the more bland the choreography, the more it had to be covered up by downgrading the ninja even more. At least when Lone Wolf mowed down ninja and Yagyu troops, he had the gun-and-blade-laden cart, plus Wakyama’s sword skills were enough to sell the audience on a single man surviving sustained combat against 100 or more opponents. Shadow Hunters has none of those advantages.

It’s a shame because there are some great locations and action set-ups for sure.

And a nice and grisly double-face-burning gimmick when two shadows are captured:

There’s enough good for me recommend these films, especially if you dig that 70’s vibe of Lone Wolf and Cub, Demon Spies, etc.

But, I, and everyone I’ve shown them to, typically come away with one thing when watching them — damn do these dudes need to lighten up!

They are so despondent in the damnation that is their blood-soaked lives, so co-dependent and miserable in their ways of ninja butchery, the morose-ness is almost comedic. In the midst of a theme song that can only be described as “loungey” or even “boozy”, they ride off into the sunset while grumbling monologues of poetic depression in the guise of stoic perseverance:

We shadow hunters are nothing but ruthless beasts.

We have nothing more to lose.

We bare our fangs to survive… but is this life?

We are the stray dogs from hell.

You don’t want your friends chuckling and doing Morissey impersonations as you’re showing them a ninja movie.

You know you’re in a different mindset when Jubei is a young hunk who actually cracks a smile now and then!

I don’t have much by way of hard data on this reboot, nor have I seen it subtitled, but the cast is full of familiar TV faces — Hiroaki Murakami, Renji Ishibashi, Takeo Chii.

AND!!! It has my absolute favorite trope of television ninja fodder — salmon-peach and mustard-beige colored suits! So many TV shows use these improbable color schemes for their mass-produced shinobi. Here at least the beige colors blend a little with some drab fall forest backdrops, but when you see a night fight with pinky/orange-clad commandos, it can only be Japanese primetime TV.

The ninja action is decent, if not guilty of all of the gripes from the movies above. Japan Action Club juiced it up with a lot of rope swinging stunt work, too.

Jubei being a radical departure from previous versions aside, Moonlight is rather similar, albeit missing the trademark facial splotch. Sunlight on the other hand is a real dandy here, with a colorful wardrobe to match his lady-killer personality.

The plot seems to be from the same source material as Echo of Destiny, with the cannon, but sans the cross-country stuff. Probably allowed them to keep the production in one spot, this being a TV budget and all.

Two more permutations of Shadow Hunters have eluded me so far: A 1983 Fuji TV remake starring Tatsuya Nakadai (!!!), and a 2011 manga reboot by Kenji Okamura (Lycanthrope Leo), with character design more along the lines of the original.

When you look at the overall census of Kage Gari permutations over the decades, its no surprise there’s a cult following. Maybe the manga are out there in the ‘scanlation’ realm? The long-out-of-print Animeigo DVDs are real collector’s items now. I totally get that. If you love the Lone Wolf & Cub flicks, these are close enough in tone and style to be happening in the same universe.

But man, do these guys need a hug.

NOTE: If you’re hunting down the Hunters, don’t confuse the 1964 Toei film Ninja Gari (aka Kage Gari, The Ninja Hunt, Ninja Hunter, The Shadow Hunt, and more) with Jushiro Konoe and its 1982 TV remake with son Hiroaki Matsukata. These are GREAT films, but not the same property at all.

THANKS: To Ichiban for some timely data, and Jessica Amada Salmonson always.