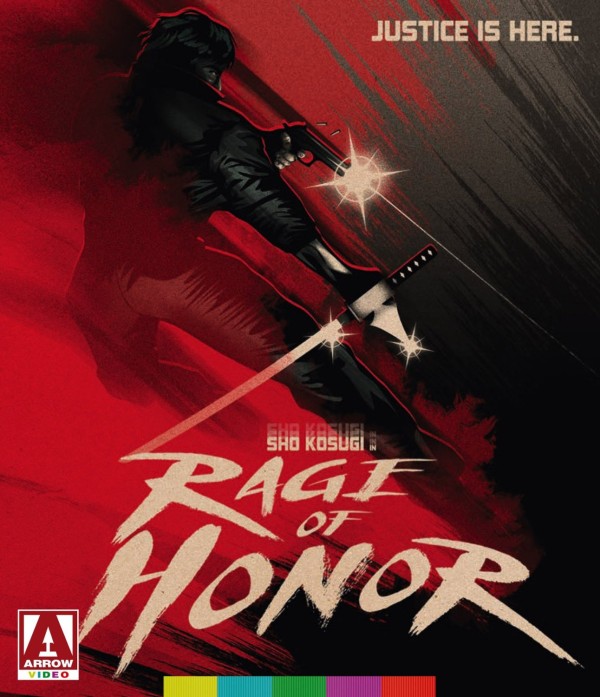 Well, it took 30 some odd years but we’re finally getting close to having all the classic Sho Kosugi fare well represented on home video. Arrow’s superb sounding release of Pray for Death hasn’t even shipped yet and they’ve already announced a follow up — the end-of-craze-days actioner Rage of Honor.

Rage was the movie where you could just feel Kosugi not wanting to do costumed ninja stuff anymore, and the industry was indeed on the verge of the kickboxer takeover, but there are plenty of shinobi-fodder on hand for him to slice up with various self-designed ninja-esque gimmick weapons. The marketing boasted the film a “high-tech adventure” but qualified that with “full of new wave ninja tactics” so yeah, no one was entirely comfortable turning their backs fully on the ninja craze quite yet.

I was a fan of the film’s villain Lewis Van Bergen from his stint on the long-forgotten Sable TV series (a superhero role he evidently inherited from a never-aired pilot that starred Gene Simmons of KISS), and would of course see anything Kosugi did, but back in the day this film felt like one of the more pronounced nails in the coffin for the ninja boom. The marketing was ninja-less, the video packaging later on was ninja-less, and moreover it almost seemed like everyone involved was embarrassed by or trying to deny the hooded pedigree of work that had gotten them to where they were. Note below the signature Kosugi kick, but in spy-wear. Ironically, the mid-2000s DVD packaging would repurpose Revenge of the Ninja publicity material to swing the pendulum back on ninja-nostalgia. 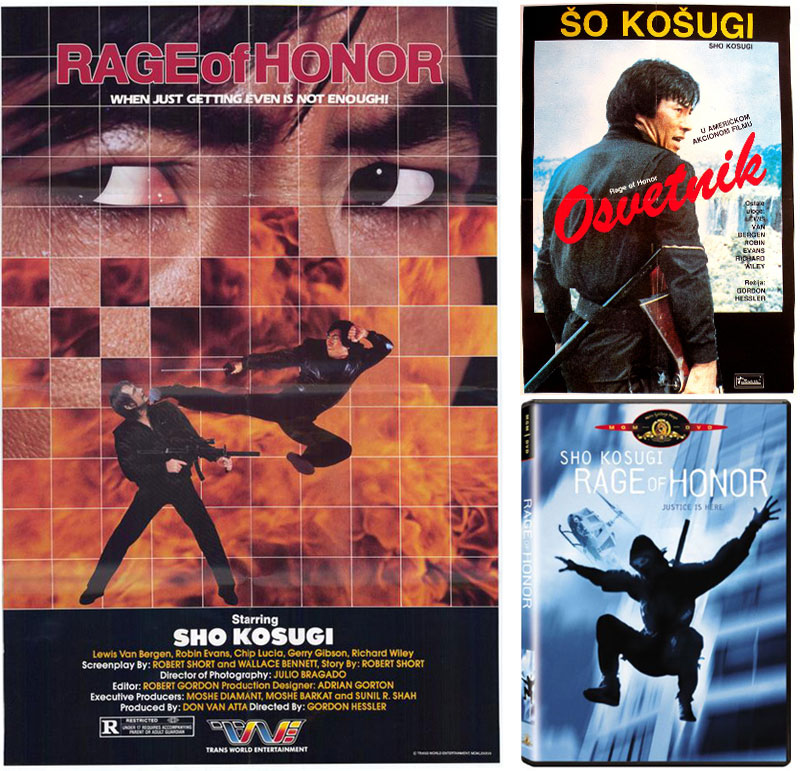 I was such a ninja-loyalist in 1987 that this turn away from the genre by some of its crucial creators felt like a major letdown, however removed from that sting by a few decades, I’ve come to enjoy Rage of Honor for the nutty fun action blast it actually is. I love the write up for it over at Cool Ass Cinema, who call it “the most expensive ninja movie Godfrey Ho, Joseph Lai, and Tomas Tang never made.”

From the Arrow Films press release:

Following his star turns in ‘80s actioners Enter the Ninja and Revenge of the Ninja, Sho Kosugi continued his domination of the US martial arts movie with 1987’s Rage of Honor – helmed once again by Pray for Death director Gordon Hessler (The Golden Voyage of Sinbad).

Federal agent Shiro Tanaka (Kosugi) used to live for his job – now, he lives only for revenge. When his partner is killed during a bungled drug bust, Shiro throws away his badge and the rule book with it: arming himself with an array of deadly weaponry – including nunchucks, blades and ninja stars – he sets out to Buenos Aires to settle the score with the bad guys.

Packing explosions, flying kicks and somersaults aplenty (as well as some truly logic-bending stunt sequences), Rage of Honor sees Kosugi at the top of his game as he battles his way from the streets of the urban jungle to the very literal jungles of South America.

SPECIAL EDITION CONTENTS
– High Definition Blu-ray (1080p) presentation from a transfer of original elements by MGM
– Optional English SDH subtitles for the deaf and hard of hearing
– Sho and Tell Part 2: The Domination – brand new interview with star Sho Kosugi on Rage of Honor and the later stages of his film career
– Sho Kosugi Trailer Gallery: Enter the Ninja (1981), Revenge of the Ninja (1983), Pray for Death (1985) and Rage of Honor (1987)
– Reversible sleeve featuring original and newly commissioned artwork by Matthew Griffin

Moving on to other major Blu-news… 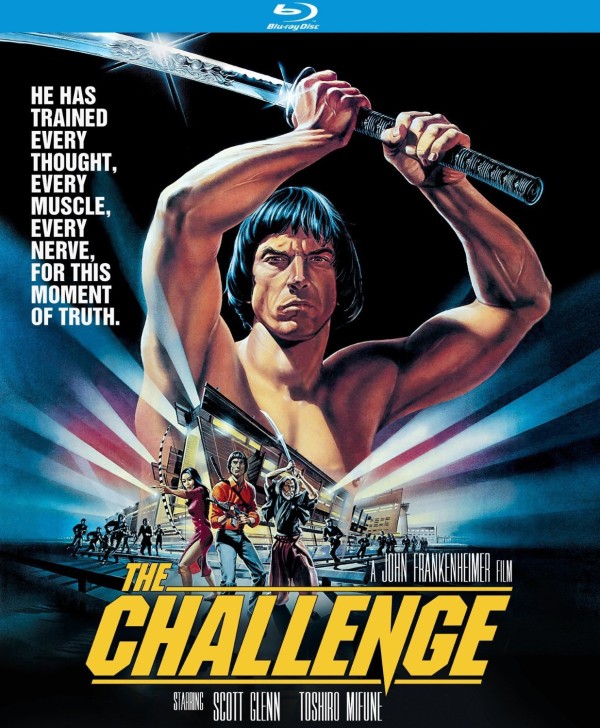 Perhaps the most ‘fallen-between-the-cracks’ major chapter of 80s martial cinema to largely miss the DVD era is getting a legit release worthy of its quality! The Challenge (aka The Equals, Sword of the Ninja) was a 1982 American film shot mostly in Japan, directed by John Frankenheimer (The Manchurian Candidate, Grand Prix, Ronin), co-penned by John Sayles (Brother from Another Planet, Matewan, Eight Men Out), scored by the great Jerry Goldsmith (The Twilight Zone, Planet of the Apes), and photographed by Hideo Gosha favorite Kôzô Okazaki (Goyokin, The Wolves, The Yakuza). A-List behind the camera, and A-List in front, too. 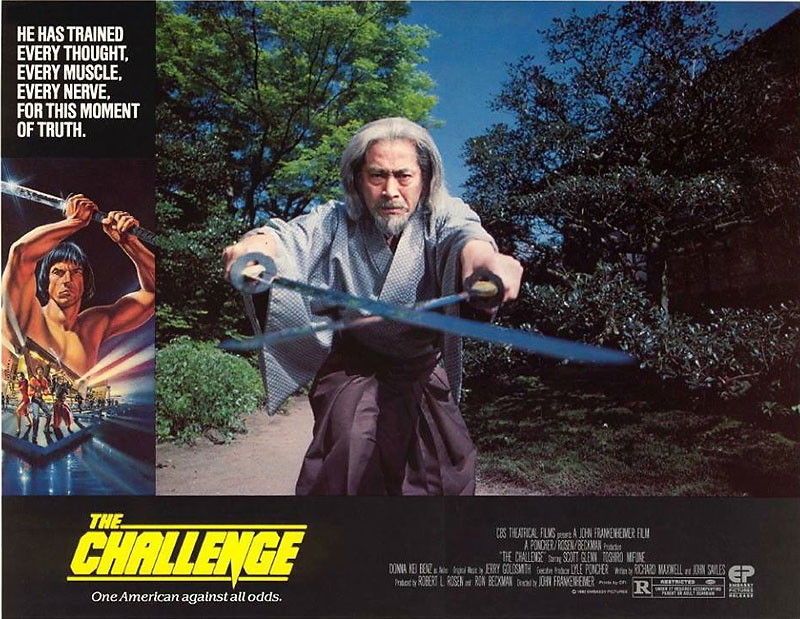 It was the first American audiences saw of Toshiro Mifune since The Bushido Blade and Shogun, and would end up being the last English-language work he’d do. Scott Glenn, after surviving the rigors of Apocalypse Now and hot off making a splash in Urban Cowboy played The Ugly American fish-out-of-water, a no-good palooka that Bushido master Mifune and daughter Donna Kei Benz (Pray for Death) whip into shape for a showdown with the clan’s black sheep brother, a rich industrialist obsessed with reuniting a pair of family swords separated after WWII. Much blood-letting ensues.

This movie sees life imitate art quite a bit, in that Scott Glenn, once on the turf of Japanese stunt crews and martial arts choreographers, takes a real beating as an actor, just like his character does. And in a refreshing departure from the normal ‘white guy gets in over his head in a foreign culture then becomes the best example of that culture ever and turns out to be their savior’ bullshit we get so often, he is instead constantly fighting from behind the 8-ball, a thoroughly expendable pawn manipulated by two sides of a generational feud. When it does inevitably come down to him ‘saving the day’ it is more a matter of self-preservation, as a frantic sword fight against a lifelong kenjutsu master turns into an explosion of pure anarchy that a barely trained but desperate x-factor of a fighter miraculously endures more than outright wins. 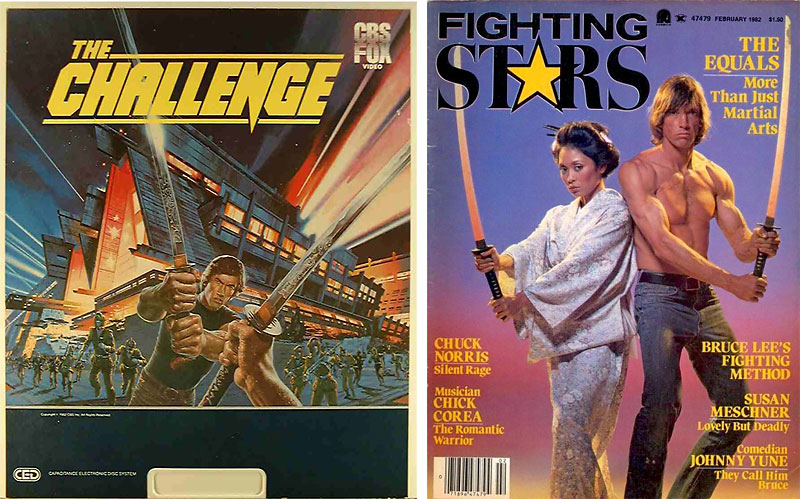 Despite everyone and everything about this movie being first rate, including some superb martial arts, The Challenge fell into a weird hole. It was all over cable after a brief theatrical run, and had a big box VHS release, but never made it to DVD (at least not 100% legit or intact) in this country. It wasn’t until airings on cable in recent years that anyone had seen it widescreen, but now , because maybe the gods have not abandoned us after all, somebody woke up and we’ve got a Blu coming and man are we stoked!!! Scott Glenn fighting ninja on Netflix’s Daredevil and now The Challenge in HD? Somebody pinch me! 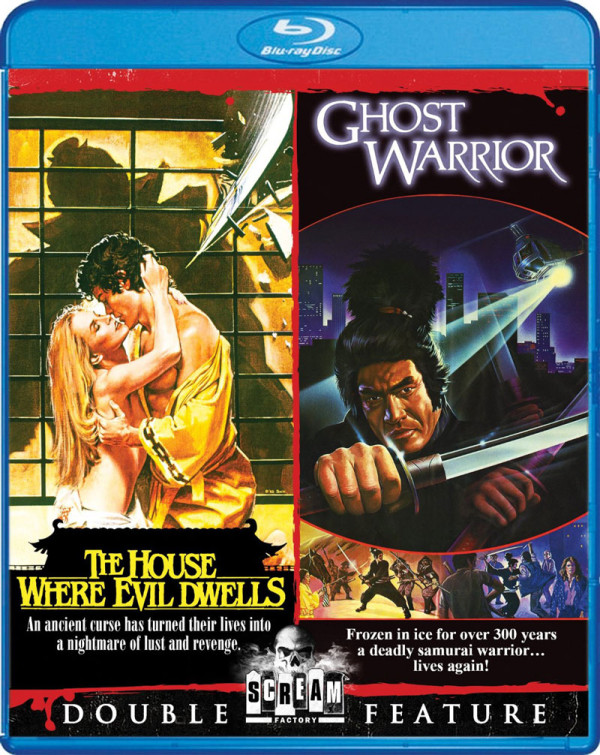 From the press release:

A Double Dose Of Samurai Action!

A century ago, a samurai brutally murdered his adulterous wife and her lover before taking his own life. Now, the Fletcher family has found what they think is their perfect Japanese home – not knowing it’s the same house where the murders occurred. But as strange events escalate and the ghosts of the dead begin to toy with the living, the Fletchers discover they’ve become unwitting players in a horrible reenactment… one which they may not survive! This chilling ghost story stars Edward Albert (Galaxy Of Terror), Susan George (Straw Dogs) and Doug McClure (Humanoids From The Deep) and is directed by Kevin Connor (Motel Hell).

While exploring a cave, two skiers find the body of a 400-year-old samurai warrior entombed in ice. He is brought to the United States in a hush-hush operation and revived through cryosurgery. Unfortunately, he is then forced to battle for his freedom, dignity and life. This Charles Band production stars Janet Julian (King Of New York, Humongous).

Two more mainstays from my cable TV-feuled youth, and another swoon-worthy Susan George role, fresh off of Enter the Ninja.