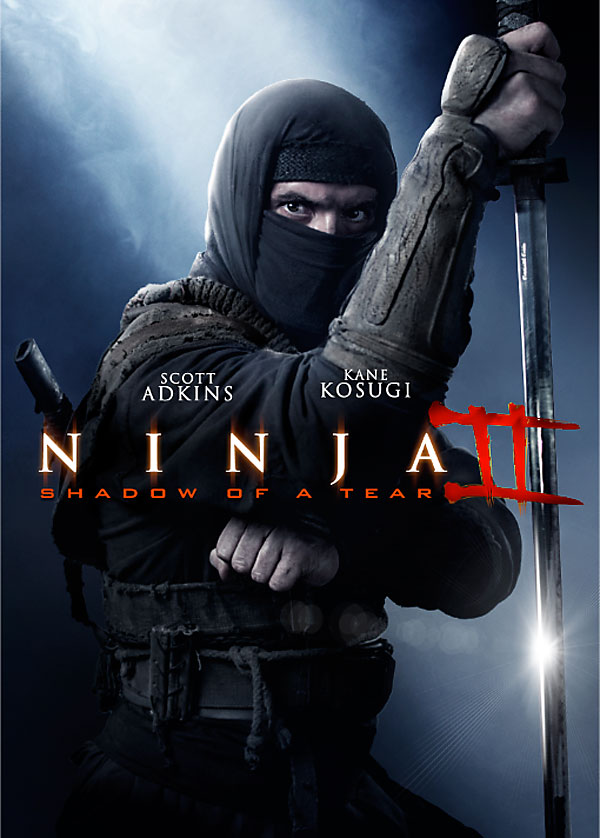 Was it really four years ago that I wrote this gushing review of Scott Adkins and Isaac Florentine‘s throwback NINJA?

Ninja was to the more widely known Ninja Assassin what Deep Impact was to Armageddon or Tombstone to Wyatt Earp — a cheaper, more exploitive and ultimately more enjoyable alternative to a bigger property. Ninja Assassin aimed for a mainstream audience, and largely missed. But worse, with its overly-digital post-Matrix aesthetic it also missed the expectations of the frontline genre enthusiasts. In short, it kinda pissed off old guard martial arts movie maniacs, and us ninja geeks.

The one thing I felt super guilty about in my dislike of the more-style-than-substance Ninja Assassin was not showing the proper love for Sho Kosugi‘s return to the screen. I supported the flick when it was in theaters, but have never returned to it, and in reading this site you’d hardly knew it existed. However, that guilt is now blunted somewhat, as Adkins, Florentine and, well… A Kosugi… return in Ninja II: Shadow of a Tear! 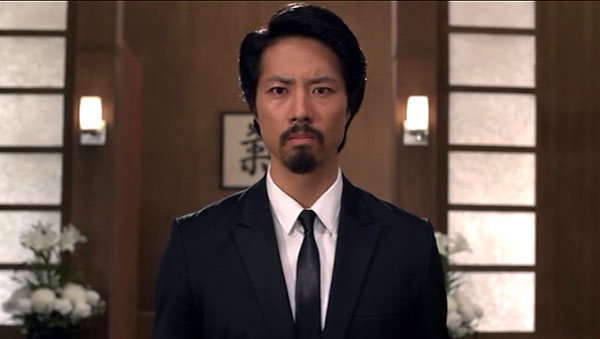 Kane Kosugi, that is. All grown up, pretty damned ripped, and looking A LOT like his pop!

As was with the first film, they don’t try to reinvent the wheel. Writer David White (who also scribed the superb Undisputed 2 and 3) spins a soundly-structured revenge plot that takes advantage of Thailand filming locales, weaves in some genuine ninja lore, but mostly gets the hell out of the way so the fights can take over. 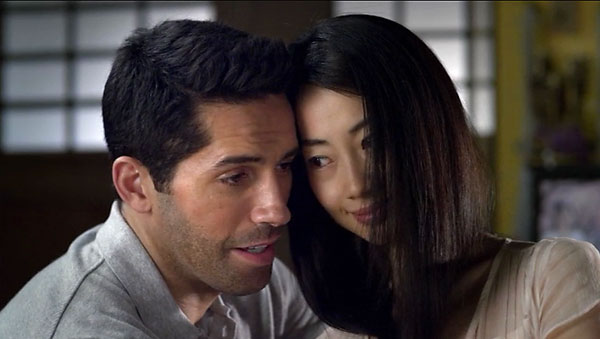 We’re reunited with Casey and Namiko, now living happily and rebuilding after the dojo-pocalypse of the first film. Things are looking good. Then he goes and gives her a medallion as a symbol of his commitment.

Seriously, he gives her jewelry.

Giving jewelry to a loved one in a martial arts movie…

GOOD IDEA CASEY, WONDER WHAT WILL HAPPEN NEXT???

By the chiseled-in-stone laws of  the genre, Namiko is immediately killed, launching Casey on the vengeance trail so he can of course eventually slaughter the men responsible, then look down at the pendant, circle of blood now closed and whatnot, and cue the end titles…

And dammit I LOVE these movies and this team for doing this! They don’t hide from the old conventions, they embrace them. This crew is determined to not let the world forget how damn SIMPLE it really is to make a fun martial arts movie. 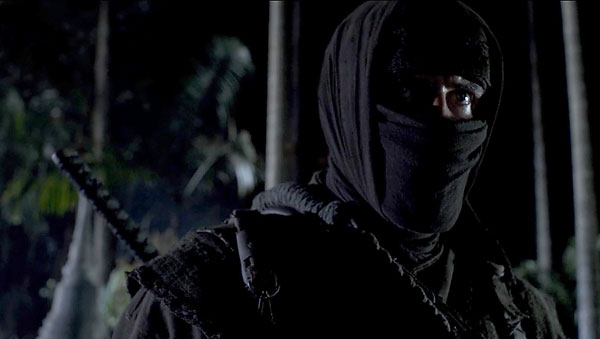 Casey’s quest for justice begins with some high-kicking rehab at the dojo of old family friend Nakabara (Kosugi), and even though he seems to know a whole lot about the drug cartel responsible for Namiko’s death, shifty couriers are discretely delivering un-marked packages to him, and he has a goatee, Kane’s obviously not the actual villain of this movie, so yeah, bonding time!

Nakabara knows three things: 1.) Namiko’s wounds are the result of the signature chain weapon of a ninja-gone-bad named Goro. 2.) this same Goro is running drugs out of Burma, a land heavily populated by stuntmen waiting to have their asses kicked, and 3.) some 75-odd-years-ago, Japan’s fabled “Last Ninja” Fujita Seiko trained a squadron of WWII shinobi and unleashed them in the jungle, where they wreaked bladed havoc on the Allies and hid a bunch of arsenals, just like THIS MAP shows!

Casey heads out into the jungle, finds an old cache of leather-and-canvas-era ninja gear and the storming of the requisite enemy compound is on. 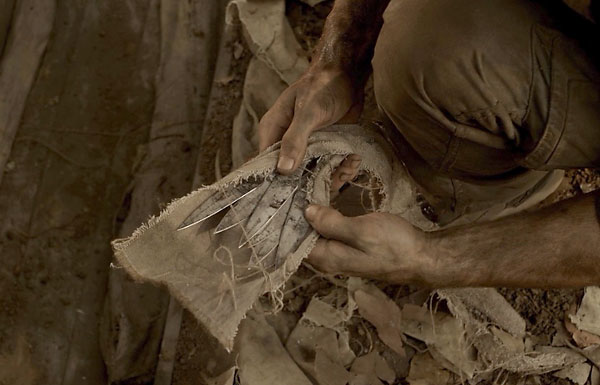 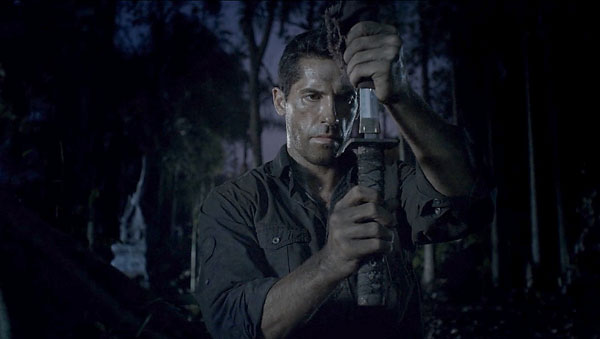 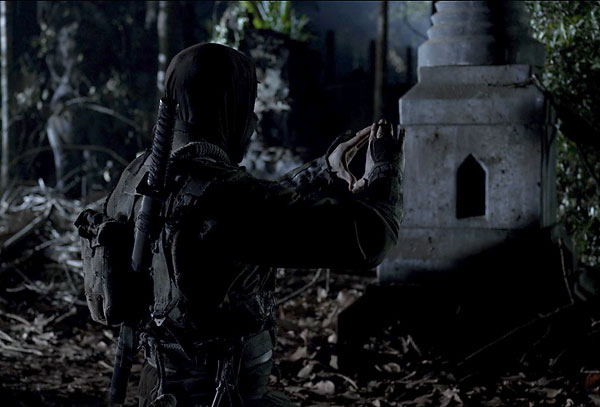 Goro is played by Shun Suguta, a veteran character actor of over 100 films, including Ichi the Killer. He knows how to pose and gesture like a deadly lunatic, and is pretty damned great as the master of the barbed manriki chain. 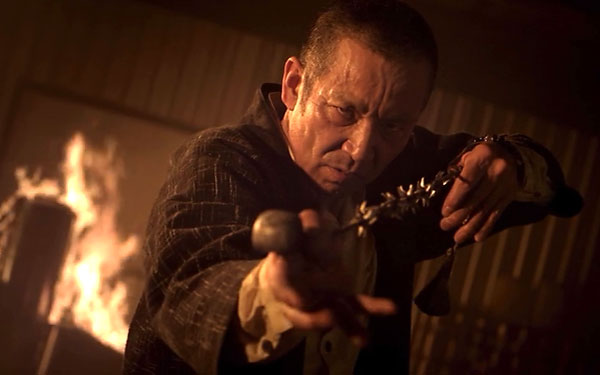 Casey kills a pile of guards, has a brutal fight with Goro’s right hand heavy, then disposes of the villain amidst the light of a burning drug empire. Case closed… 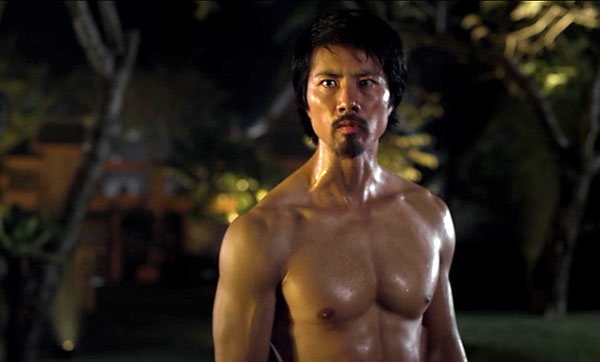 It’s hardly a spoiler to reveal that Adkins and Kosugi were cast together for a reason, and after a big surprise reveal the final chapter of Shadow of a Tear sees them tear each other apart, trashing room after room, alternating arsenals and exotic flying spin kicks in equal amounts. Absolutely great! One almost nostalgically roots for Kane here, and I swear if he had his rocket-assisted weapon-laden Huffy from Pray for Death, Adkins would have been toast!

Once again, Florentine and friends deliver a hybrid of two distinct eras of martial arts cinemas — weapon-centric ninja combat of the 1980s and the high-kicking spinning and jumping combo-based movie kick-boxing that ruled the 1990s. Both are retro by now, and the heart and soul of each period is retained, and embellished with some modern touches. One modern crutch they NEVER lean on though is the ubiquitous and utterly contemptible shakey-cam. No jittering camera trickery to hide the casting of non-martial artists or overwhelming digital fixes that for many of us have ruined fight scenes in modern action cinema. 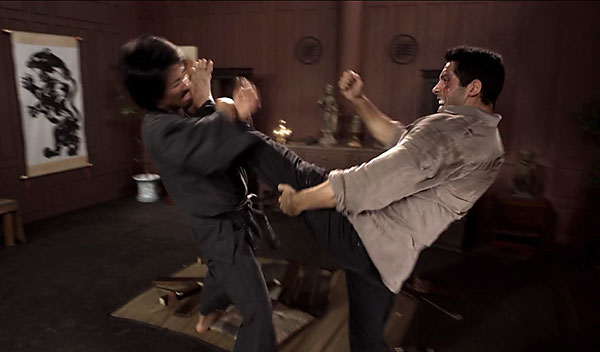 In fact, one could almost edit out the ninja elements entirely and still wind up with a conventional martial revenge film. Perhaps an Undisputed-related script was retro-shinobi-fied here? A bit of a shame, as the idea of the Fujita Seiko legacy, powering up with antique WWII gear, etc. is so damn great I wanted it more at the center of the film.

The reality, however, is that combining the shadowy ninja visuals with the more contemporary unarmed combat makes these movies a whole lot easier to market to worldwide audiences, and as these are genuine indie movies they need each and every sale.

So VN is officially giving Ninja II: Shadow of a Tear 5 (Ninja) Stars. It’s an essential purchase for any ninja movie buff.

It’s really important we all support this movie, too. It does well enough, we’re that much closer to a fourth Undisputed getting funded. By purchasing and spreading the word, you’re not only rewarding the filmmakers who worked their asses off here, you’re checking a YES vote towards old school movie martial arts, towards holding the camera still and letting legit screen fighters and skilled choreographers do their thing. And you’re not letting the 80s ninja craze be forgotten.

Buy Ninja II on Amazon in Bluray or DVD formats.