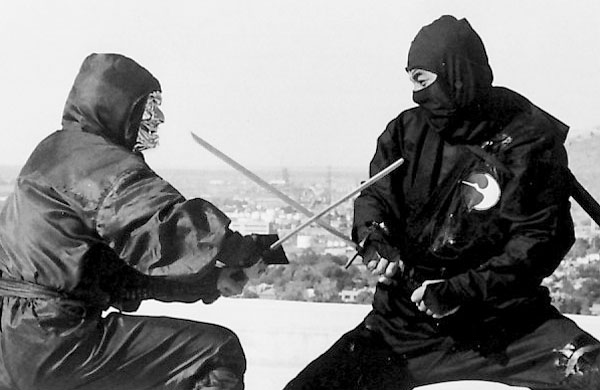 One thing you hear over and over from the anti-‘Ninja-To’-sword-haters-club is the blade is “pure Hollywood.” Before this recent spat of research and over-scrutinizing swords in old movies, I used to argue against that notion; the Japanese studios got ninja ‘wrong’ decades before we did, right? And the blade was sold mail order well before our ninja boom, so Hollywood sure didn’t invent the sword. It wasn’t even used in The Octagon (1980) or Enter the Ninja (1981).

BUT, what can be said is “pure Hollywood” is the narrow strictness of the visual shorthand for ninja. From 1982’s Revenge of the Ninja onward, the regulation ‘Ninja-To’ was absolutely chiseled into the vocabulary of ninja in American film and TV. The sword was so well branded here, Kosugi or Dudikoff using a curved blade would have been seen as a blasphemous prop master’s error.

The Japanese were, as with manga, much less narrow in their use of screen props, however their use of a sword for a shinobi character carried additional editorial significance. Whereas American films were typically ninja vs. mobsters, drug lords, night shift security guards and sometimes other ninja, Japanese movies typically featured ninja vs. samurai.

Samurai use long, ornate blades that make statements of their social rank and wealth. A ninja’s cruder, less decorated blade is an indication of lower social rank. It says his sword is not his soul, but a tool to get a job done. At the same time, the shorter blade when used against full-length katana in the hands of an armored warrior says volumes about the ninja’s skill and courage.

So let’s take a look at some different swords in the hands of shinobi. We’ll start with the most historically credible ninja films ever made – the Shinobi-no-mono series.

But hey! Is that a straight blade??? 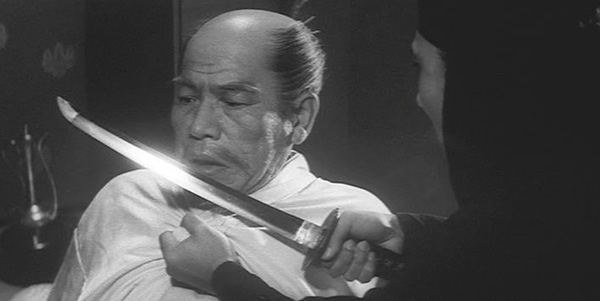 I’ve had a few people refer me to this photo in opposition to statements I’ve made about the lack of short, straight blades in Japanese ninja films. And yeah, that is Raizo Ichikawa holding an apparently straight blade made by a studio prop master under the guidance of tech advisors like Takamatsu Toshitsugu and Masaaki Hatsumi. 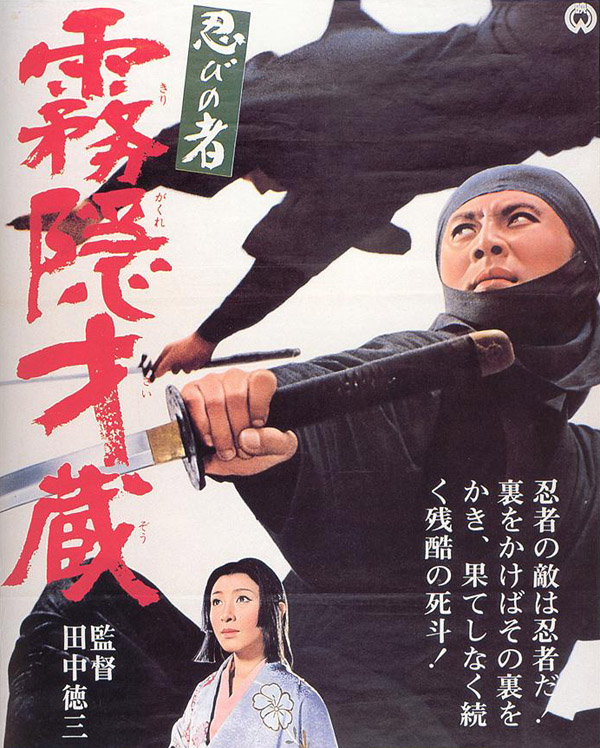 Hmmm. Why was the poster image altered to reflect a more traditional sword? Or was the publicity photo above retouched? And was it altered by Daiei back in the 60s or by Animeigo for their recent DVD packaging?

[UPDATE: Or as VN reader Kent Wood points out, is the above image just a scan from a book that is bending at the spine, thus distorting the page? I think he’s right! I think I’m missing the forest for the trees…]

Point I’m making here is even with the Bujinkan tech advisors on board, the blades are inconsistent between the Shinobi-no-Mono films, and they sometimes change from shot to shot. So don’t go putting too much importance behind any single still. 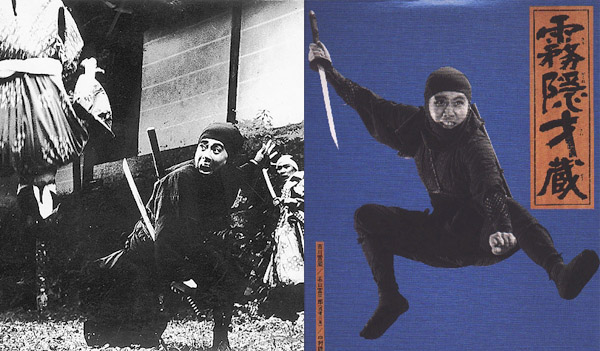 Above, two publicity shots with two different props. Rather than an editorial statement, this is more likely just the difference between what is called a “hero prop” – in this case a character’s signature sword, which they only might have produced a few copies of – and a more disposable prop used as a ‘stunt double’ if you will, for quick-cut fight scenes where the piece is more likely to be damaged. 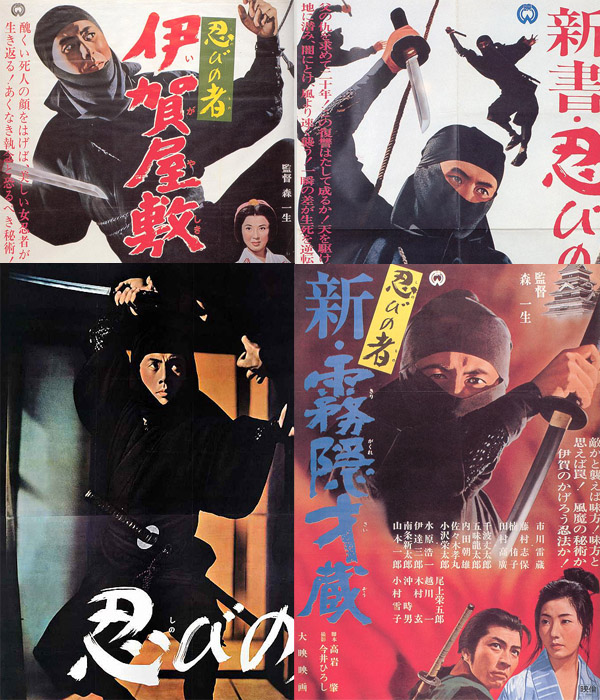 And not all Daiei ninja used such swords. Battle scenes involving multiple extras and stuntmen as Iga clansmen revert to plain katana and wakizashi. Budget saving measure, or where they embracing the notion that blades would differ from man to man, mission to mission?

Now, I’ll pose a question to everyone who’s seen these films.

I think there’s actually an ever so slight CURVE to this blade. What do you all think?

Hard to tell. I’d kill to see this prop, if it still exists. If there is a curve, it is so minor, changing perspective straightens it right out.

And here’s another question – why the hell hasn’t someone replicated this awesome baby and sold me ten of them? WHY?!?!?

Meanwhile on the small screen, Onmitsu Kenshin (aka The Samurai in Australia) was absolutely bursting with ninja during its 60s-long run. Prop swords varied from season to season, with a limited TV budgets always the deciding factor in style. 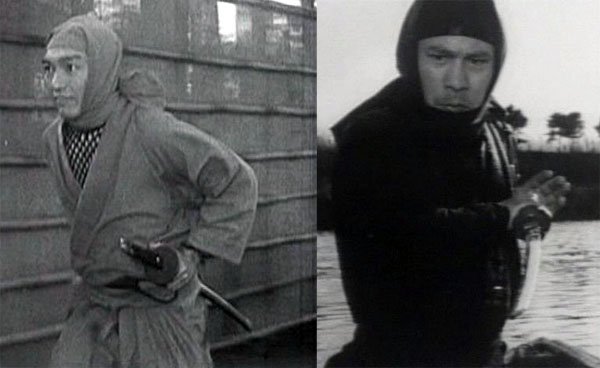 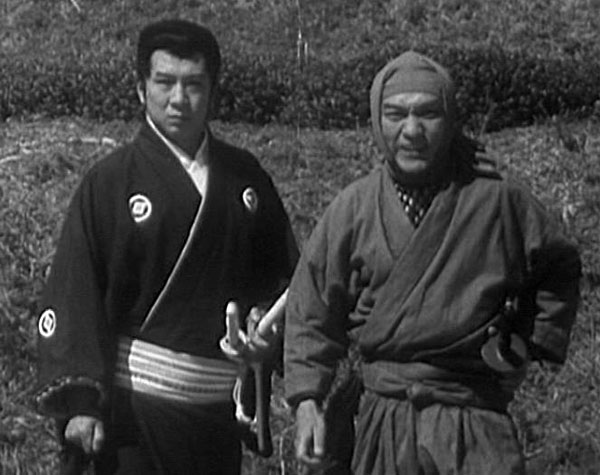 Note Tonbei the Mist‘s wakizashi with oversized round tsuba, in comparison to the standard swords of the hero Shintaro. The good Iga ninja always used these, while the evil ninja clan-of-the-season would have various plain swords. There was, however, a recurring sword used for the several seasons’ boss villains – an absolutely monstrous ‘horse cutter’ (I think?) with a handle as long as its blade. I love this freaky thing! 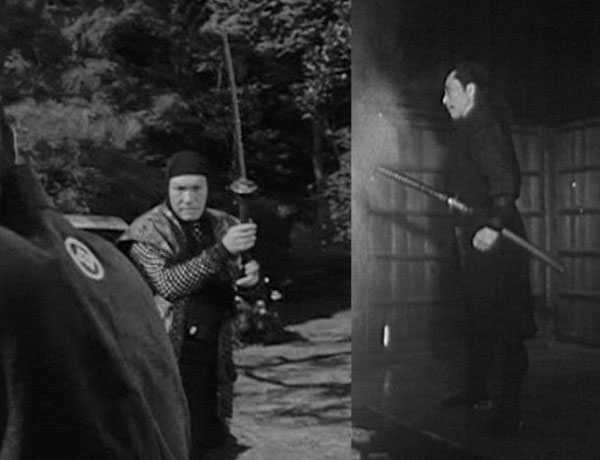 The 60s weren’t all gritty, B&W, espionage-based, hard ninjutsu, though. There were as many swashbuckling adventurers and colorful plucky heroes as tormented shadow dwellers. Plenty of heroes who were of otherwise samurai status as well, so they used their same trusty blades when on night missions.

However, the 70’s was a decade where ninja on the big screen were less likely to be the hero, and more likely to be fodder butchered by a surly sword-swinging ronin. The financial and scheduling realities of movie and TV production usually trumped any desired fealty to martial tradition or obscure history, so these disposable ninja carried off-the-rack, bulk produced props that didn’t require exclusive tooling or smithing. There were a lot of wakizashi blades with katana handles, and shorter curved swords with square guards, like this:

That’s one of dozens of ninja mowed down in the Lone Wolf and Cub films, and the above style sword was standard issue in 70s and 80s films.

Here’s a better look at what Japanese filmmakers considered the ‘Ninja-To’ pretty much at the same time as we were buying the straight versions made famous by Hayes and Kosugi: 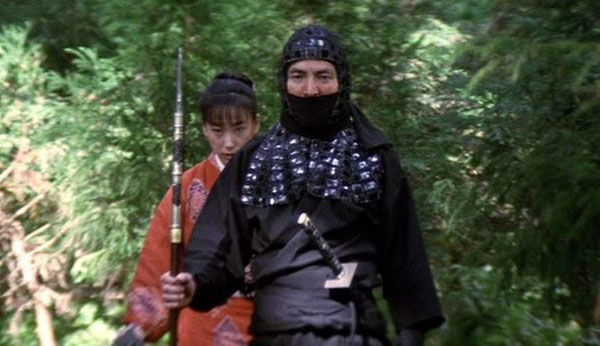 *As a side note, is there a film with a wider pendulum swing of great costuming (above) and laughable bullshit (below)? These hunter cammo suits give me douche chills.*

The same year, Enter the Ninja began Sho Kosugi‘s assault on America. Mike Stone‘s weaponry was custom, not mail order, and the swords were closer to the Japanese studio model.

But in 1983, the smoking chest was opened, and there it was!

From Revenge of the Ninja on, Kosugi was in charge of choreography and props, and never strayed from the short, straight blade with long handle and square guard – used by ALL ninja – heroes, villains, rival clans, students, masters… everyone. 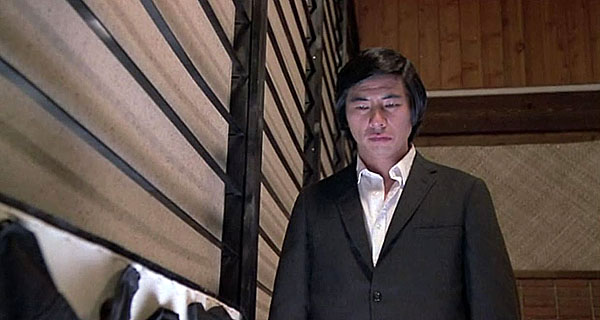 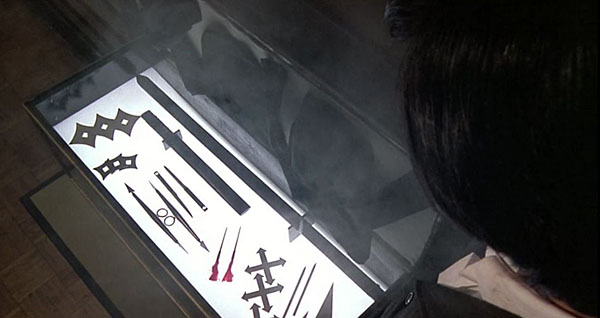 He even made his own in Pray for Death (1985), a scene that drove Tim and I nuts because the sword he supposedly forged real quick during his power-up montage ends up a fully decorated blade with ornate hammon line, right out of the prop bin.

*And that dumb-ass helmet ranks with the cammo gear above!*

When the Cannon Films ninja mantle was passed to Michael Dudikoff, so too was the now requisite ‘Ninja-To,’ seen throughout the five American Ninja films that closed out the 80s craze. 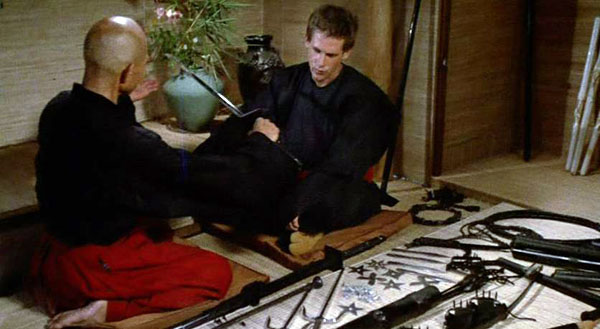 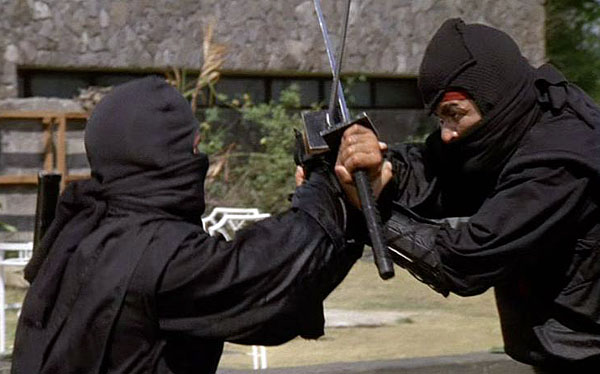 And at the same time in Japan? Masaaki Hatsumi was a big part of the kids’ show World Ninja War Jiraiya (Sekai Ninja Sen Jiraiya – 1988), which featured a variety of outre ninja-based characters with just as wide a variety of swords. 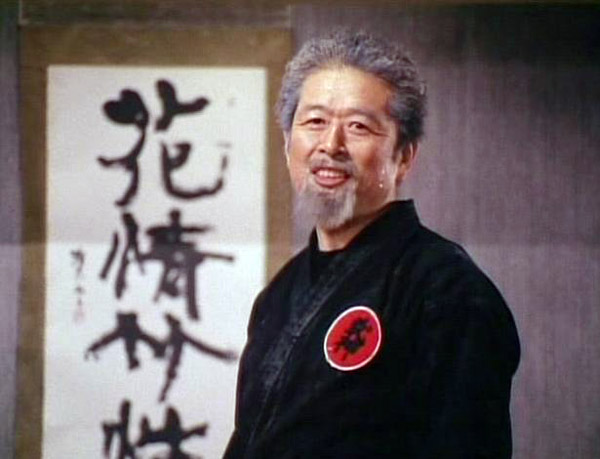 Coming next: A look at Kosugi’s officially licensed swords, and some props from our own collection here.