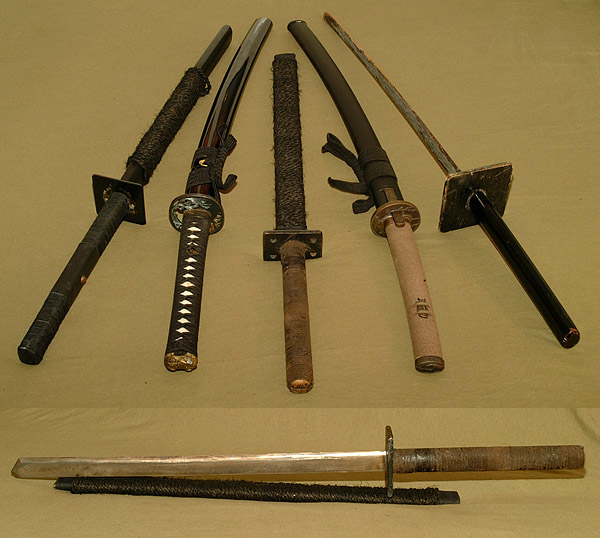 At the apex of the 80’s ninja boom, I was in my early teens, had disposable income from odd jobs and a dad willing to put his name as an adult on a mail-in order to a martial arts supply company. Despite these blessings, and being a big mark for any and all ninja merch, I never owned the stereotypical ‘Ninja-To.’

I had just enough knowledge of Japanese film and TV to have gained an affinity for the curved shorter blades with square guards, plus a real contempt for stuff like Asian World of Martial Arts‘ camouflage ninja sword. As the craze movies got cheesier I increasingly associated the regulation blade with everything wrong and frustrating about the genre.

The craze waned concurrent with graduation and college, so stuff went into storage. In the mid 2000s I cracked open some of those long-stored and half-forgotten archives and was pleasantly surprised at what had survived. 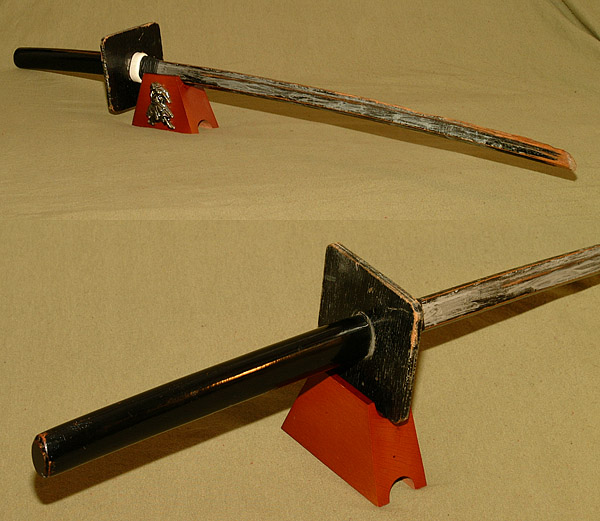 This is my original “Ninja Bokken” from Dolan’s Sports. This thing was bashed against trees, other wooden swords, Tim’s head, and my brother’s head (he had a more typical straight version that broke, HA!).

It was taped-up white one winter, the blade was once painted silver to stand in for a real sword in some abandoned home movie plan, then it was stored away with a golf club tube as a sheath in a garbage bag that magically preserved it from the elements and a termite-infested basement. Amazingly it’s right as rain today, and I treasure this thing above any other piece I have.

Another treasure didn’t fare as well in storage, but then it wasn’t that pretty to start with… a T.J. Craig ‘Real’ Ninja Sword. Tim and I sent a summer’s worth of saved and scrounged nickels and dimes to some obscure address in Canada for these after seeing the no-frills ad in Ninja or Black Belt. 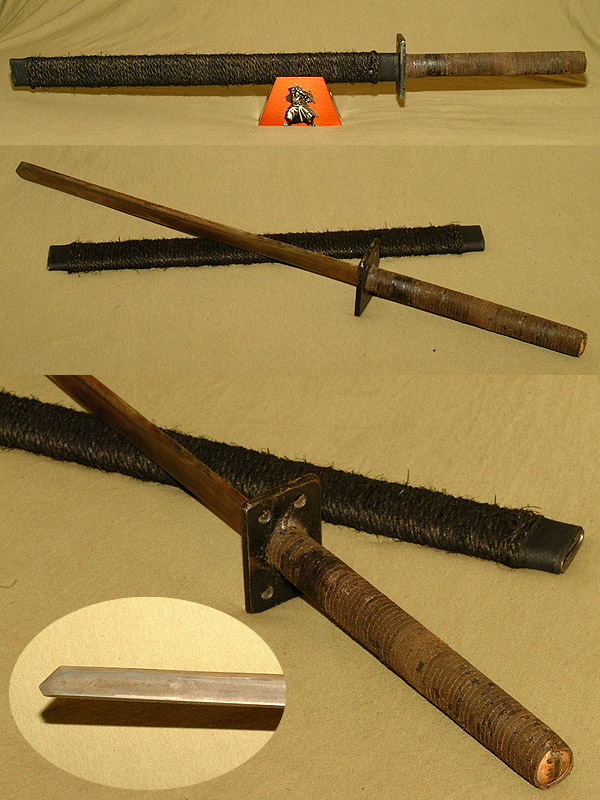 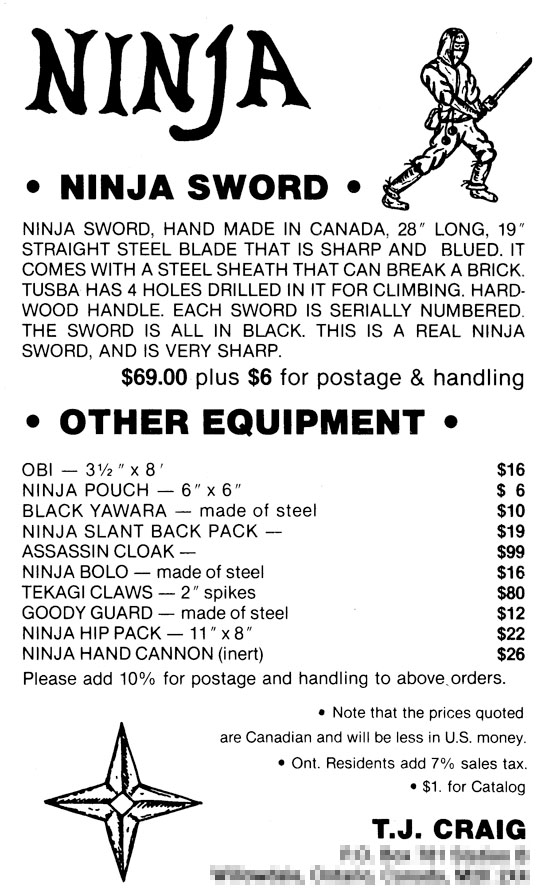 The sheath can break a brick! How could we not want that??? We had such romantic notions of this dealer – the low-brow ad with weird items next to all the other slick, photo-laden spreads with the same old crap month after month. To us, it wasn’t dodgy. It wasn’t cheap. It was code. This was the real stuff, hidden behind a primitive ad others with less insight would brush off. But we had a hunch we were on to something. This ad played a silent flute only we could hear!

Elation turned to mild heartbreak. The execution of the swords was about as good as the ad.

These truly were the storied ‘crudely ground slab of rough steel’ forged by impoverished ninja of legend. The chisel tips were useless. The sheaths were hastily folded and crimped steel, and scraped the blades loudly with every draw – hardly the stealth weapon. The handles were barely-finished wood with acute square edges, splinters abounding.

Nothing had been misrepresented, but no triumphant ‘See, we knew it! Told ya so world!’ was going down either.

So we sandpapered and filed and taped and did what we could to make them workable, then off to the woods. At the first whack of a thin green sapling, the blades bent. BENT! Less cutting power than a flea market machete…

We hated these things, and ourselves, and wondered if our money would have been better spent on the “Ninja Hand Cannon” or “Assassin Cloaks” but what was done was done.

Every few years, we’d independently break these out and do some more cosmetic work. Tim ground the handles down to round. He got his blade pretty damn sharp if memory serves. I learned the hard way that hockey stick tape has surprisingly little shock-absorbing properties, so I added some cord-wrapping to mine. Gave it a rustic feel, as did wrapping the sheath in 50 feet of black rope.

Times cures wounded pride and squandered funds, and with my current perspective, I look at this survivor (albeit a bit rusty, but nothing steel wool won’t take care of) with warm nostalgia. 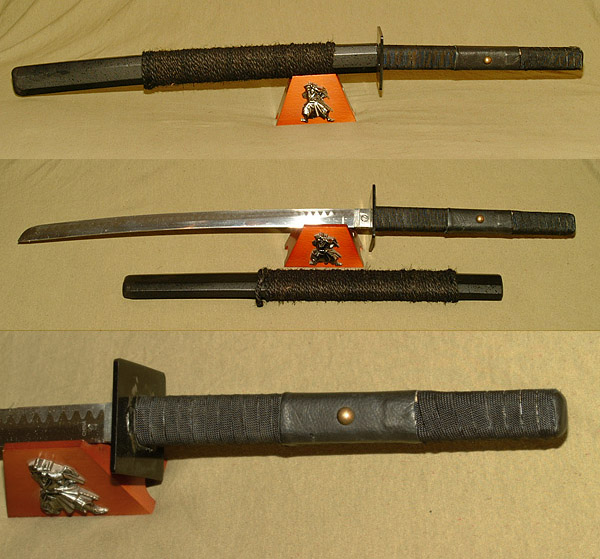 I’m no swordsmith or craftsman of any skill, but I dabble and experiment once in a while. This is a prop I made in 2004 for a photo shoot for the old Ninja80 site, deliberately fashioned to look like a 60s Japanese movie sword. Started out with a knock-off “practical full-tang” wakizashi from either BudK or a shop in Chinatown, elongated the handle, slapped some leftover cord and leather remnants on there one night, and got what stage prop guys call “good from afar, far from good” results. Looked OK – and definitley not off-the-rack –  in the pics though, and that’s what counted. 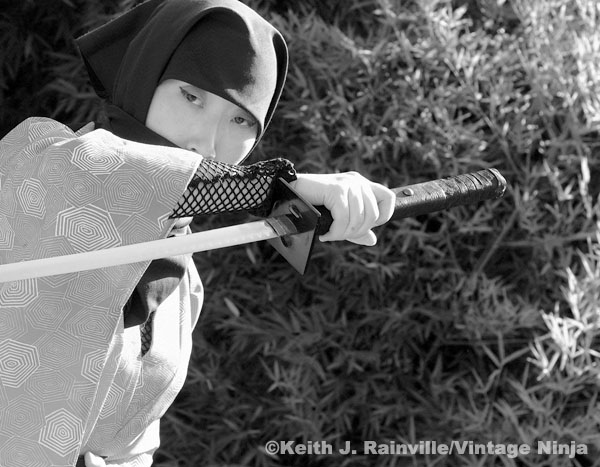 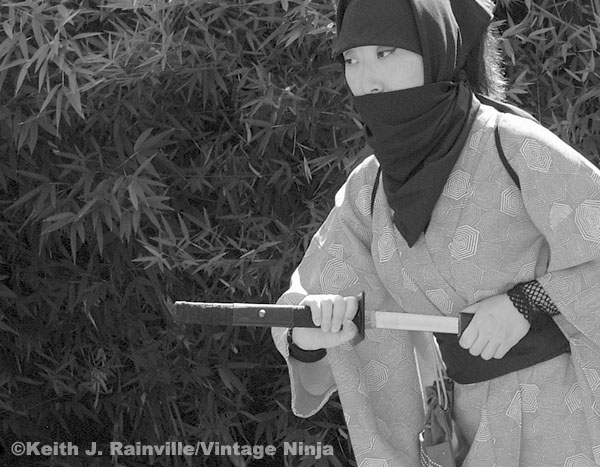 Custom ordered these last year from an eBay sword shop out of Hong Kong that is either defunct or changed their name. (There’s a few other sellers with the same goods now.) Nice thing was they let me get katana handles on wakizashi blades, and had a variety of wrappings and fixtures. I love the brown twine handle, and while I dislike ornate gold stuff, they had a set-up that was toad themed, 50s ninja wizard style! 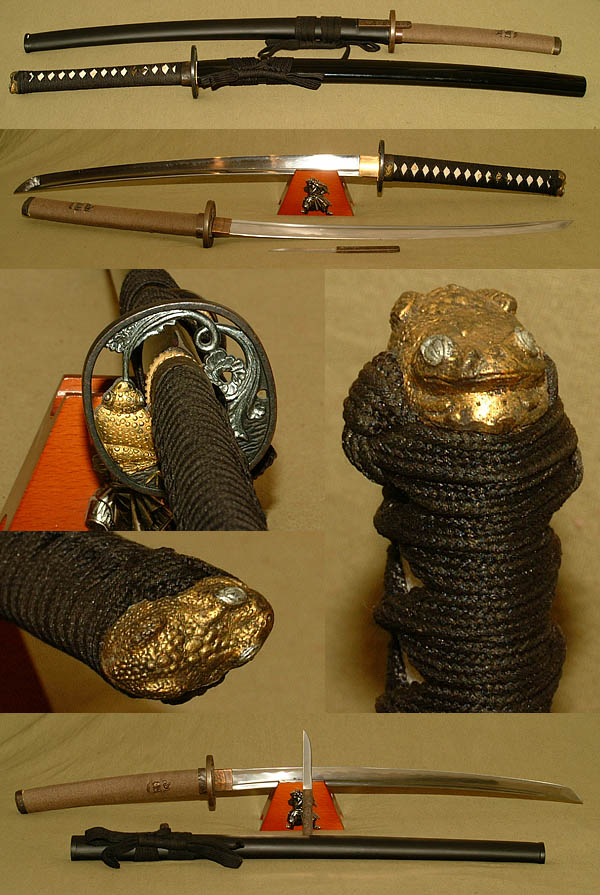 So with this array of non-stereotypical “ninja swords” in hand, do I regret a hole in the collection?

Frankly, there is one that got away, and considering my passed biases and the tone of these articles lately, there’s irony here. But if I could go back and grab one of these back in the day, I would: 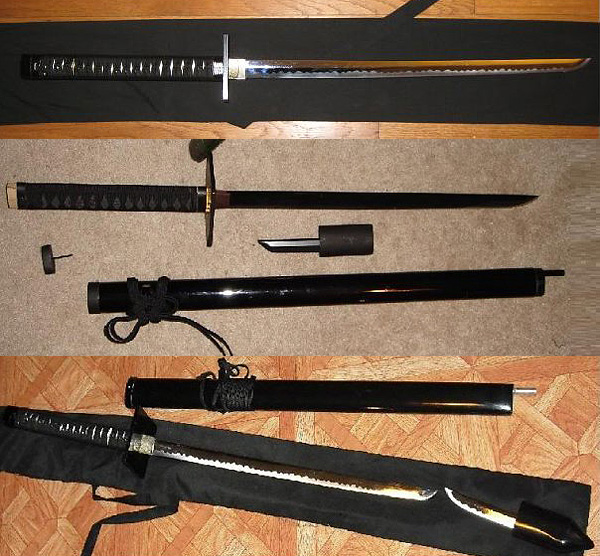 This is the OFFICIAL “S-K Ninja Sword” sold by Sho Kosugi Ninja Enterprises, Inc. There’s a real chicken-and-egg relationship between his fealty to this style blade on screen and the sale of a merchandised version off. 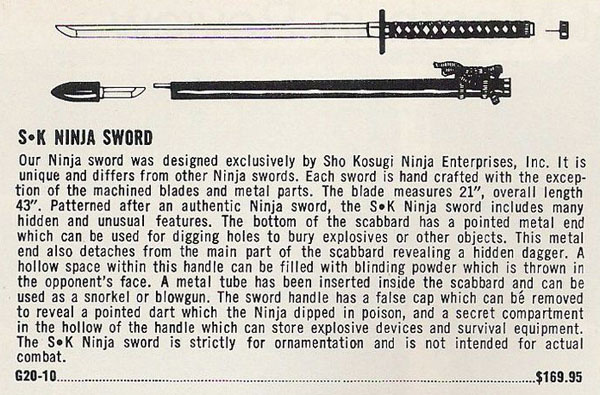 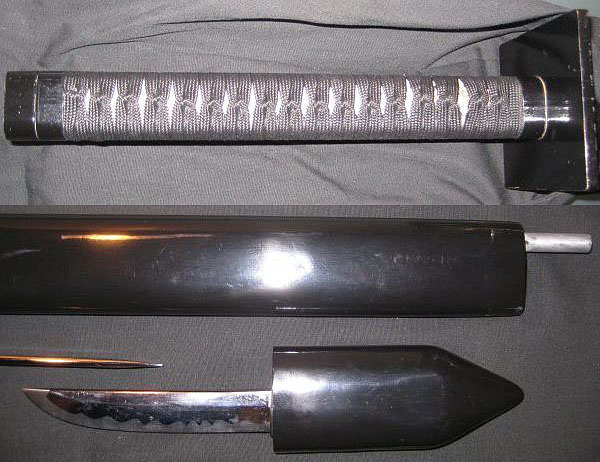 These gimmicked blades, possibly in a variety of metals and finishes, were sold out of  a mail order house and official fan club newsletter in San Gabriel, California. 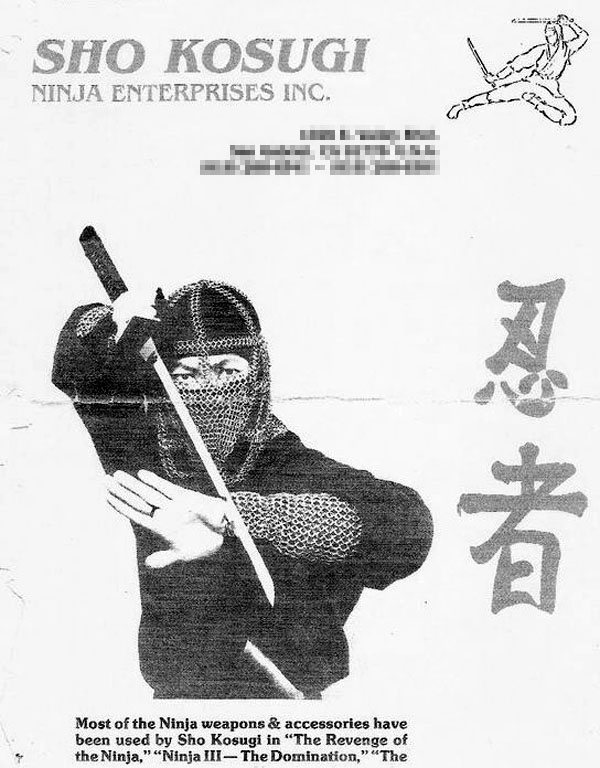 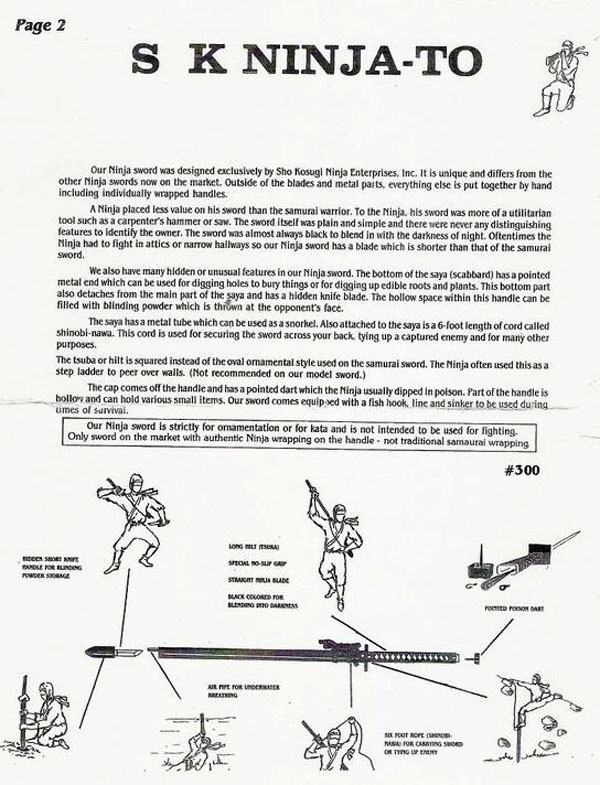 Yeah, if I was going to own a regulation “Ninja-To” – I’d want it to be the one that actually IS the stereotype, the sword of  Kosugi, the sword of Lucinda Dickey, of Lee Van Cleef…

Maybe the only thing I’d want more than this is the TOY version! 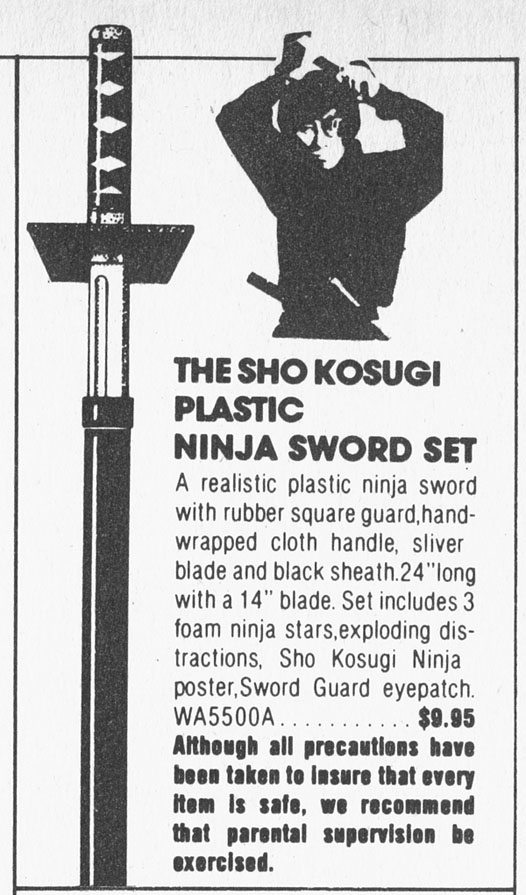 Next time, we wrap all this sword talk up with one final thought –  has the research (and responses) lead to more questions than answers?