Kairyu Daikessen was a 1966 Toei fusion of ninja revenge and giant monster magic. It delivered in spades on both fronts and was a fantastic movie.

Then it was picked up by American International Pictures for English-language distribution, and has since wallowed in international obscurity. Does it have a cult following based on sporadic UHF TV airings and grindhouse circuit screenings? Sure. But it should be A LOT better known.

So why hasn’t this flick been one of the most exploited and re-issued titles of all time? It should have at least B-grade kaiju status, under Godzilla and Gamera for sure, but right up there with the Gargantuas at least. It should have been a staple rental during the ninja craze, but for some reason has never been marketed for it’s shinobi content.

The blame starts at the AIP re-title, which you may have seen in TV Guide listings and in DVD discount bins for years, never knowing what you were missing – MAGIC SERPENT.

No one could have figured out a way to glom onto some other genres and trends with a strategic retitle bearing a little more dramatic flair? How about Samurai Serpent? Shogun’s Serpent? The Dragon Ninja? War of the Ninja Monsters?

The fact that one movie can have THIS:

AND be translated into English and still be widely anonymous to both kaijufiles and shinobimaniacs is just a crime of marketing and exploitation NEGLECT! Dammit all to hell, it ends here!!!

The main-event of Kairyu Daikessen is an extended kaiju beatdown between dragon and toad, with a castle destroyed in the process.

Kairyu Daikessen is actually more available now than it ever was back in the day. Beautiful widescreen subtitled editions are floating the trader seas under titles like “Dragon Showdown.” The only legit US release is burried on a double feature disc with a Gamera flick, and it’s the pan and scan AIP dub. The American version has it’s charm though, as all the monster “voices” were replaced by ones more familiar to US audiences (Godzilla, Rodan, Ebirah included). 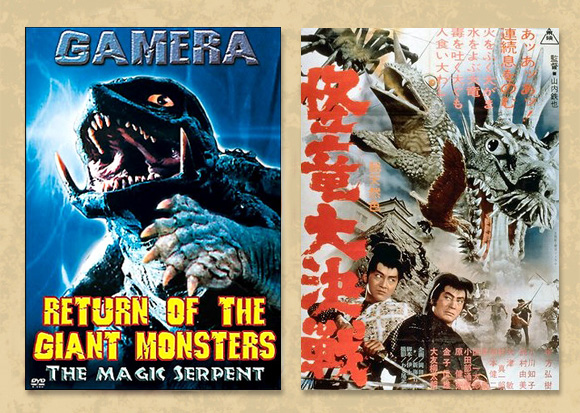