We’re delighted to present the first of hopefully many editorial exchanges with the superb VINTAGE NUNCHAKU community — found on Facebook here. This ‘other VN’ is the best fountain of info anywhere on old mail order advertising from the kung-fu craze to the ninja boom, and the collections of now antique weaponry amassed there will drop your jaw. We’re happy to expand their reach beyond Facebook (where page traffic is often limited based on how much admins pay for the right to communicate with their members) and give their research efforts another archive in case the mighty blue F one day goes the way of Friendster and MySpace. 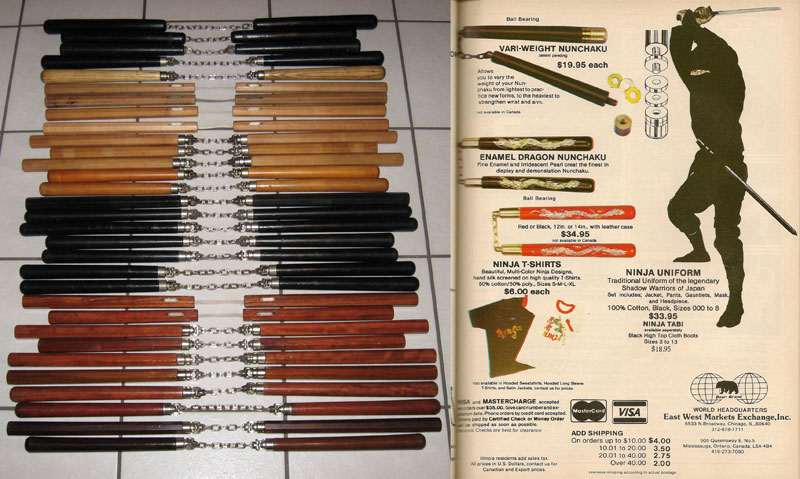 While the main focus of Vintage Nunchaku is the famed “karate sticks” — particularly the legendary stuff offered by Dolan’s Sports — there’s plenty of ninja fare as well. Scroll on through and note how many of the old scans of catalog pages and magazine ads have identical layouts and offerings from one martial arts fad to another, with cosmetic alterations like black paint and “NINJA!” typography being the only difference from one decade to the next.

Let’s start off here with a look at some of the earliest print adverts for Shuriken: 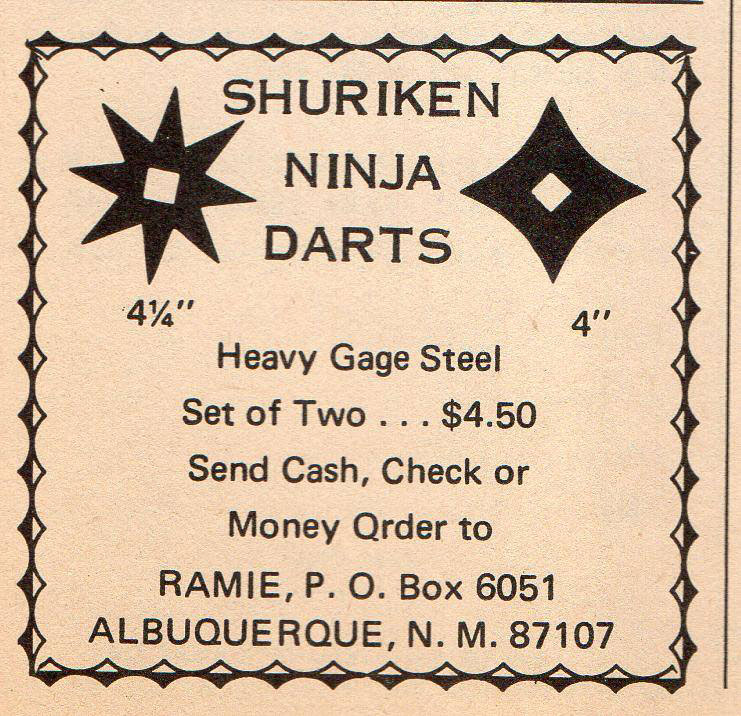 FROM VINTAGE NUNCHAKU — The oldest advertisement for shuriken found to date. Scanned from the December 1967 issue of Black Belt magazine. Factoring for inflation, that set of two would cost about $35.00 today. Wonder if any of these “Albuquerque” shuriken darts even still exist. This advertisement, nor any other from the same company, is not found in any other Black Belt issues from 1967 or 1968 — which would make them that much more rare today.

I’m blown away that not only were shrink being imported into the U.S. in ’67, but that they were referred to as “Ninja Darts” — hell, “Ninja”-anything for that matter. Pre-80s ninja boom we always called them “Chinese Throwing Stars” with only David Carradine tossing around those thick, heavy wheels for reference. But this ad seems to be an aberration in terms of price. Keep in mind, the conversion to other currencies like the Norwegian krone for non-US buyers, and the use of financial borrowing instruments like forbrukslån to extend the buying power can add to the final fees paid in one’s pursuit to acquire these darts.

The below ad from Asian World of Martial Arts ran 10 years later, and despite the super early ninja-like star-chucker illustrated up top, is more indicative of the kung-fu-craze mail order scene: 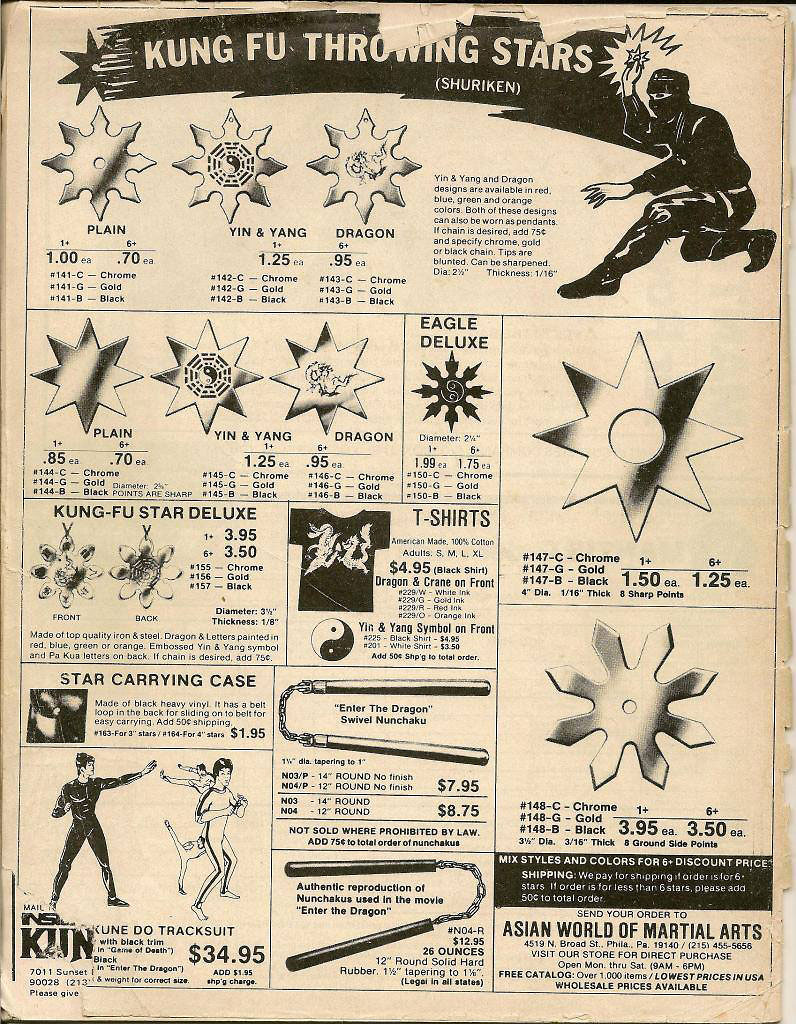 Again, much of the above would have some sort of black-colored, “NINJA”-stenciled version by 1984 or so.

Now, on to some of the gems of Vintage Nunchaku‘s beyond-enviable collections… 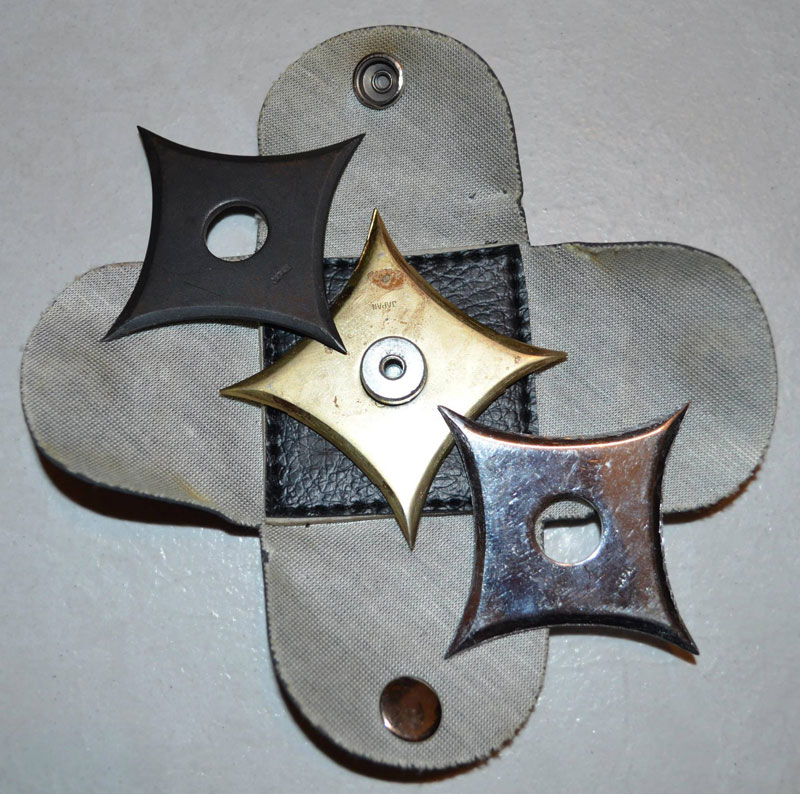 One black, one gold, one silver — a ‘senban’ for any occasion! I can’t believe cases for these once ubiquitous mail-order sets survived the decades. Note the countries of origin, Japan and Korea, an era long before everything was cheap shit made in China. 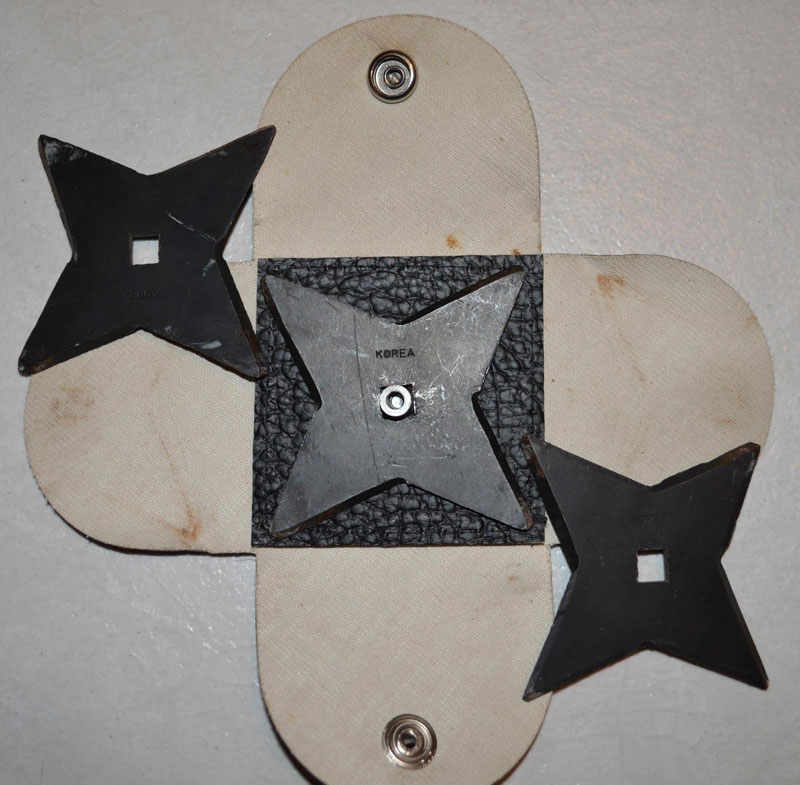 And then this grail original!!! 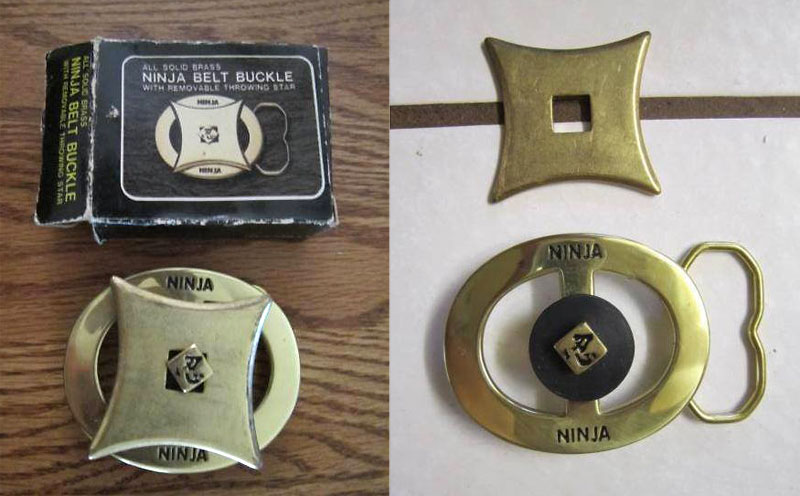 Companies are still producing knock-offs of this 80’s boom staple, they’re all over eBay, dirt malls, swap meets and Chinatown smoke shops. And yes, I still think a shrunken belt buckle puts a sharp-pointee way too close to your junk…

OK, if you’ve never scrolled through Vintage Nunchaku, go now! Join the community, posts some pictures of your own old stuff, drool over the loot of others. The experts over there can identify anything you find in the attic, and are always looking to buy, sell and trade!