Its was a dog-eared, dime-store novel world where a man was a man, a woman was a victim waiting to happen and the road to revenge was a street washed in blood. Violent and lurid men’s adventure novels go back decades, but in the 80’s, cinema actually caught up to their bloodshed, boobs and body counts, so the context was better than ever! These ‘men of action’ lines also adapted to every major martial arts trend decade by decade, so in the 80’s, yeah… NINJA PULPS!

I’m terribly limited on space (and funds) right now, but damn am I tempted to start scooping up these martial arts-themed trash novels, especially those cashing in on the ninja craze. 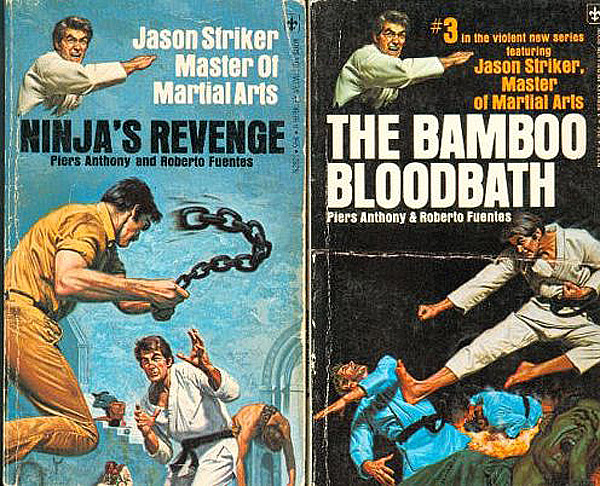 Piers Anthony and Roberto Fuentes were responsible for six chop-socky pulp novels starring Jason Striker: Master of the Martial Arts. These were in the ‘old-school vet brings back exotic skills from the war and uses them to wipe out all them hippies, punks and pinkos’ model. Two in the series were ninja-themed.

The most prolific of the ninja-sploitation novelists was ‘Wade Barker’ (Richard Meyers), who wrote 16 titles during the craze, including eight bat-shit crazy brutal tales of Brett Wallace: Ninja Master. 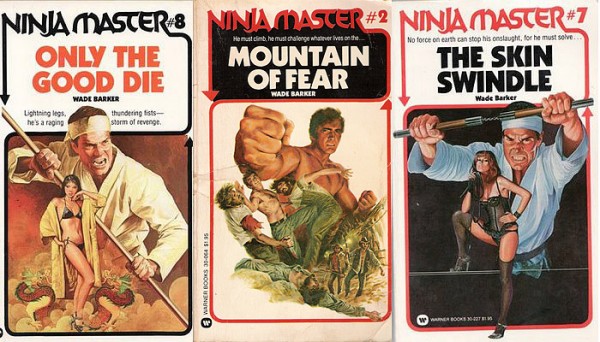 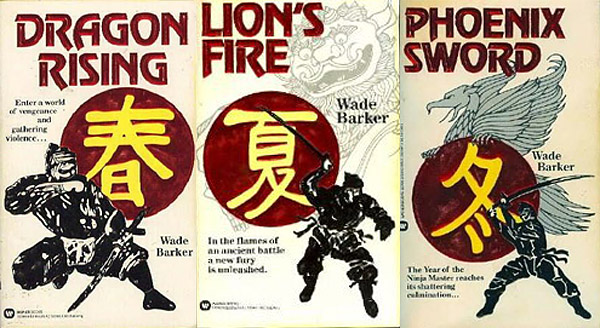 If I even start buying these, I’m doomed. I’ll have to sell a kidney to feed the habit, ultimately showing up on some cable ‘Hoarders: Exposed’ show looking like a demented freak.

But how do I resist a stinky old copy of Bamboo Bloodbath on eBay? HOW?!?!?!